Liathach was next up for me and londonwalker after the best day ever on Beinn Eighe, and after yet more Latitude ale and many types of local distilled produce. The weather wasn't so good, as in a layer of clag draped itself across the tops: 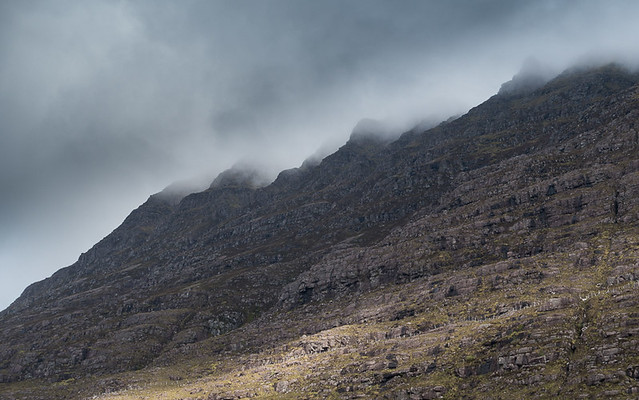 ...but then it wasn't so bad either as it didn't rain, can't say fairer than that I suppose.
We parked in the trees at the end of the path down from Mullach an Ruthain, and warmed up the legs on the 2km walk back up the road to the start point, can recommend that as a tactic (thanks Andy). 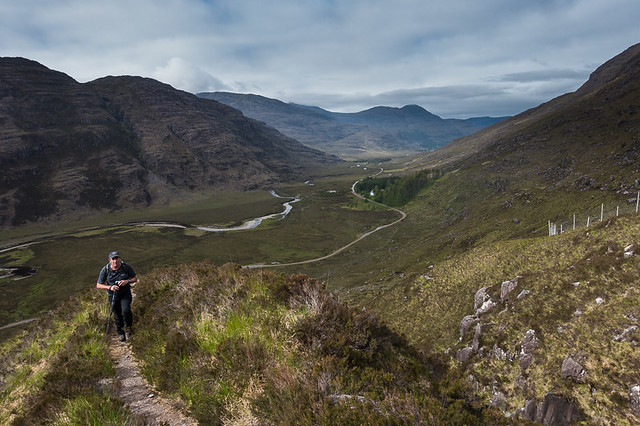 As Andy remarked at the end of the walk, once off the road every yard of this walk has to be fought, so straight into the ascent by the burn, with the one saving grace that altitude gain is quick. The path is decent, a few little scramblettes, and the merest hint of a respite for a few yards on gaining the coire. 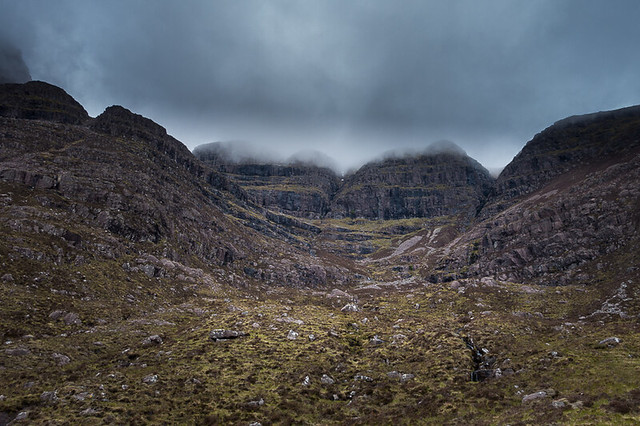 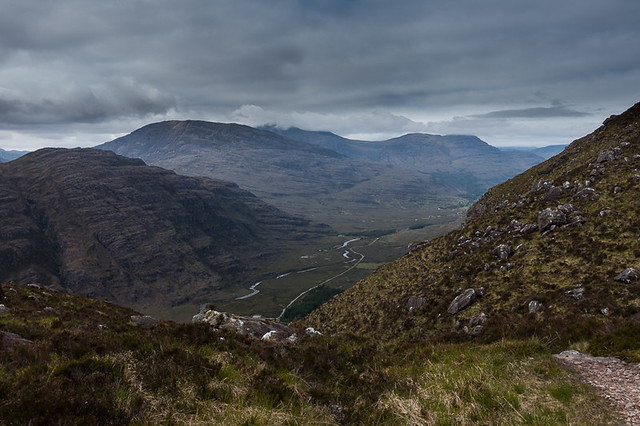 Overall, all the ascent is relentless, I think we were both happy with the progress made, and got to the ridge less than 2 hours after leaving the road. As the clag was in we politely turned down the guidebook invite to nip up to the eastern top for the views, instead turning west to make our way over the two subsidiary tops en route to Spidean a Coire Leith. The views down concentrated the mind, north-east to Beinn Eighe across Coire Dubh Mor: 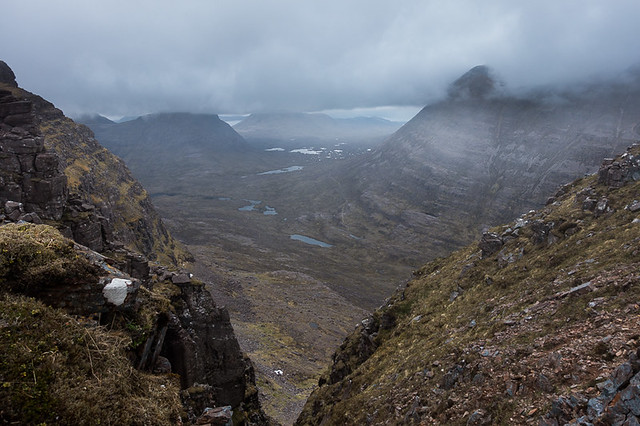 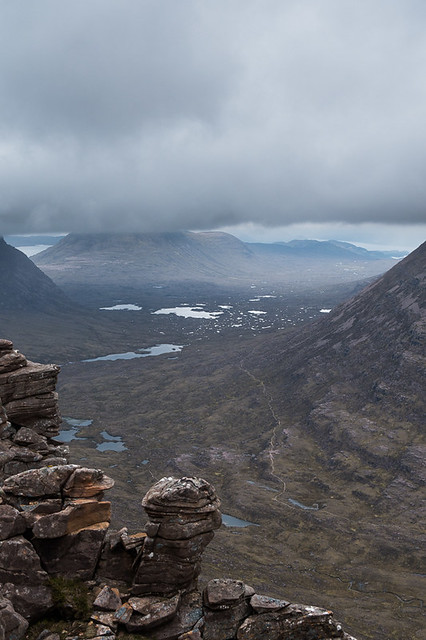 Along the ridge to Stobh a Choire Liath Mhor, the top en route to Spidean: 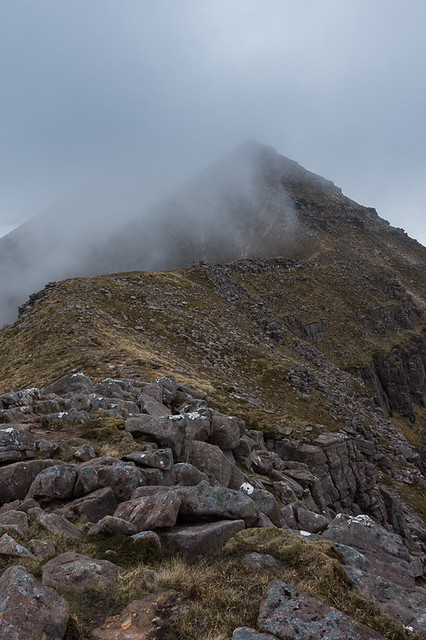 The exit of the gully that is initially followed by the ascent path high up into Coire Liath Mhor, before the path swings east: 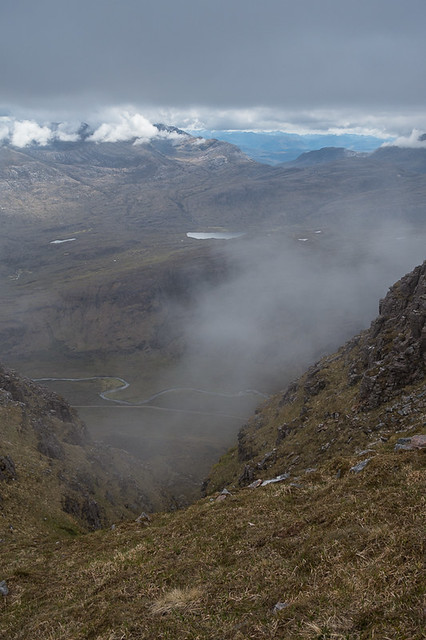 Summit of Stobh a Choire Liath Mhor, ridge to Spidean a Coire Leith behind: 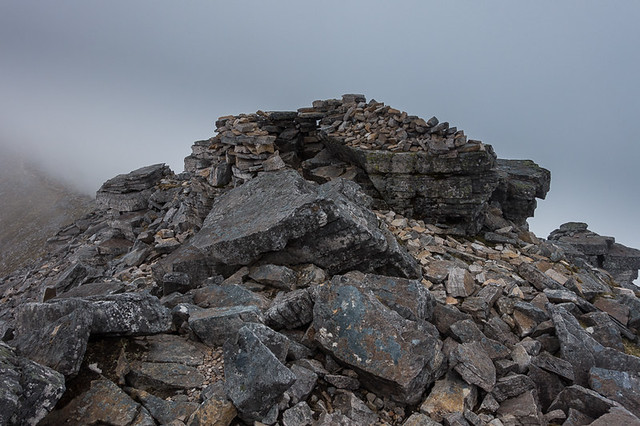 And this is where it all got a bit silly. Moutainlove mentioned the steep little down climb coming off the summit of Stobh a Choire Liath Mhor in her March report, and it was on this that I managed to tumble, having placed my foot on a block of rock which then decided it had had enough of being joined to the mountain and wanted to make it's own way in life. I only fell a few feet but managed to smash my watch and the rock, after an initial wobble, finally dissociated itself from the mountain and landed on my knee. About the size of a large shoebox, it was enough to make me go ouch, but no proper damage done, except to pride. Andy was too busy laughing to take any photos. Salutary lesson learned about three points of contact, looking for alternatives etc...

The down climb, (there is an alternative to the left as you come down, no idea whether its any better, and I wasn't going to to go back up to find out): 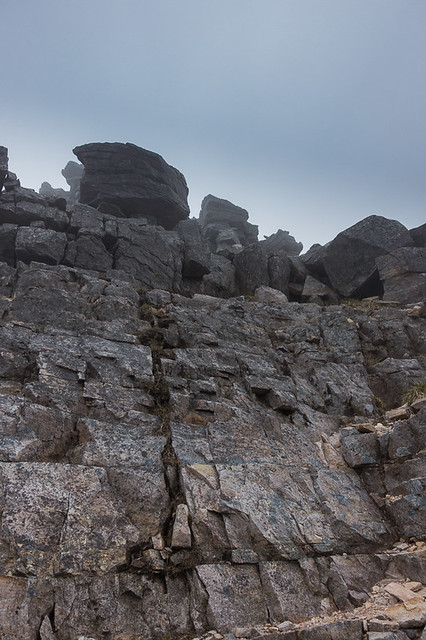 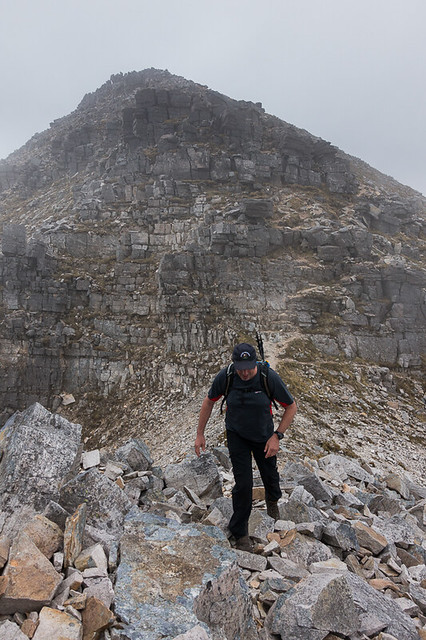 The climb to the summit of Spidean was a long drag on slightly jelly-ish legs. At the top sat a solitary Frenchman, all wrapped up and determined to wait for a view... 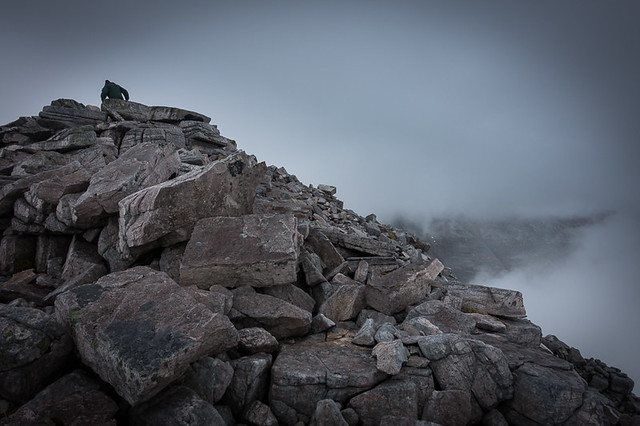 But the only view we got there was of the south-east ridge (the one you're not supposed to go on coming off the summit): 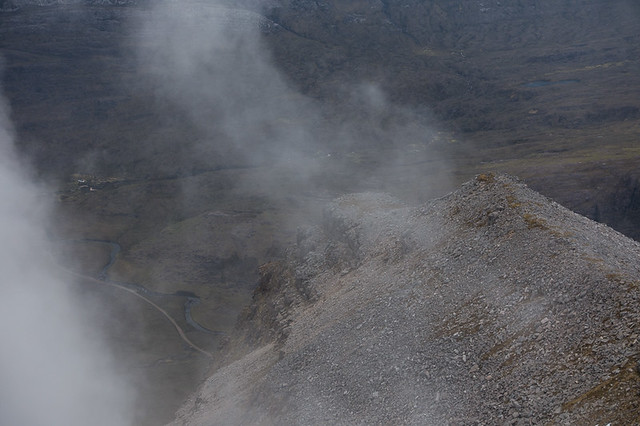 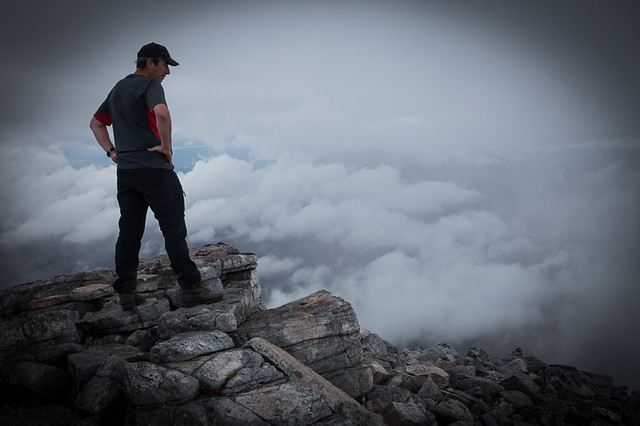 Picking our way off the summit in the right direction in the mist was a little tricky and the compass was out a couple of times to make sure we stayed south-west. The boulder field was tiresome to say the least.
We opted to avoid any further significant scrambling so the by-pass path it was. The clag would have rendered the pinnacles less rewarding also, but manly promises were made to come back on a fine day to do the scrambling. 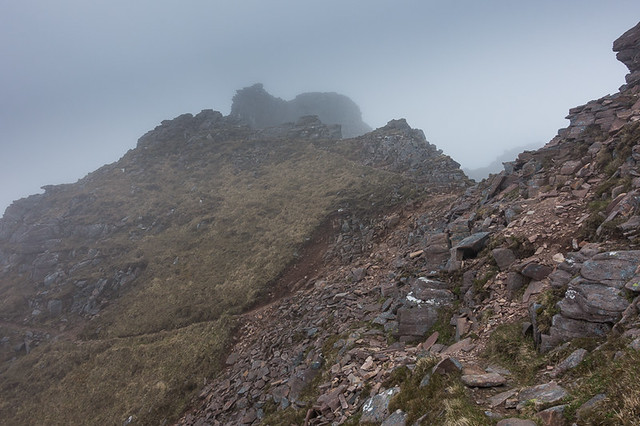 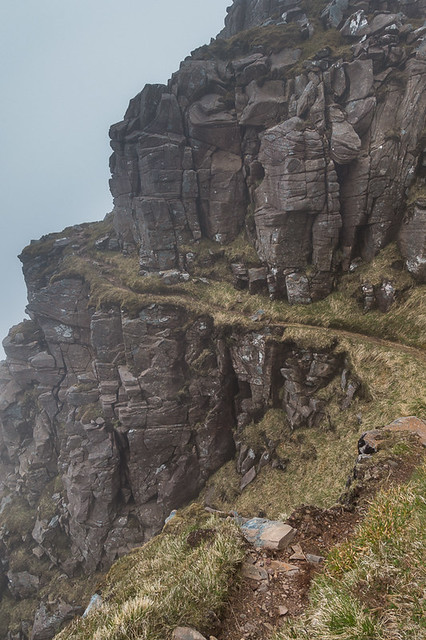 And we confirmed all the previous reports about the dodgy nature of this path. Even the clag didn't reduce the sense of exposure, just made it feel even more sinister, as the steep drops to the left disappeared into a cauldron of mist..... In one gully the path had virtually disappeared, leaving just wet grass to slither across. Eventually it was all over and then the slightly bizarre grassy slopes up to the 2nd Munro, Mullach an Ruthain, appeared, completely out of context with all that had gone before. This was the third time I'd been on this summit, having gone up twice in my teens, and the weather gods smiled by allowing the mist to lift and give us some views.
Northern pinnacles looming out of the mist: 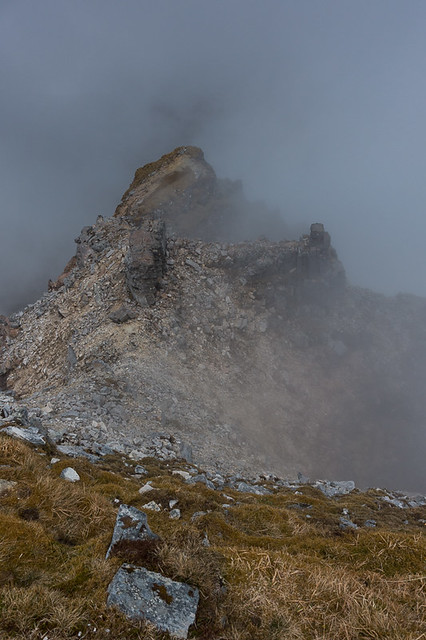 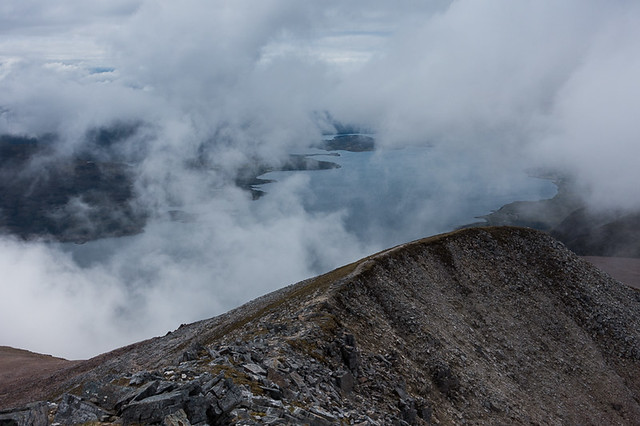 South into Toll Ban and the way down: 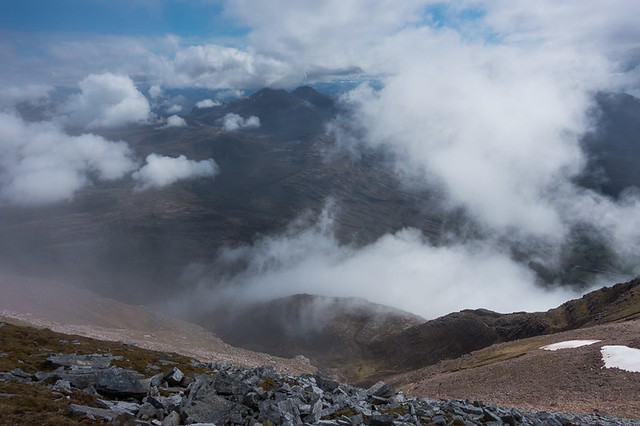 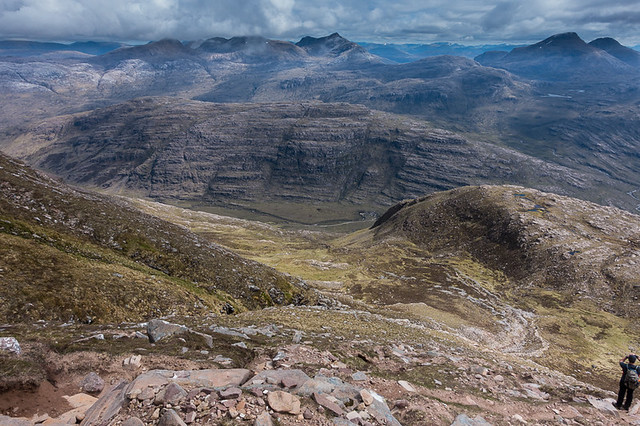 As on Beinn Eighe the top part of the descent path was mightily eroded and awkward on tired (and ancient) legs, but path maintenance work is progressing nicely, and we soon reached firmer ground. The lower part of the descent winds down across interesting sandstone slabs and shallower ground. 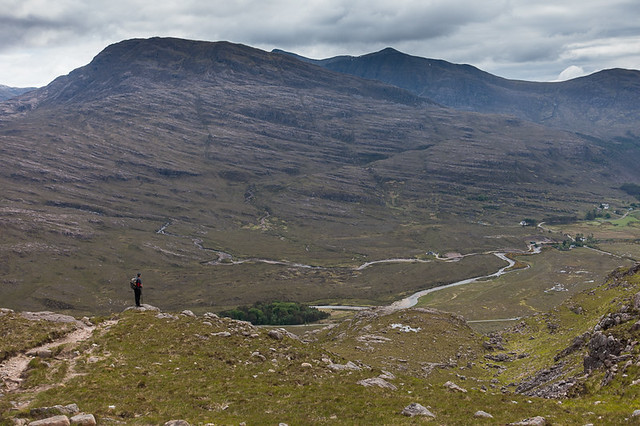 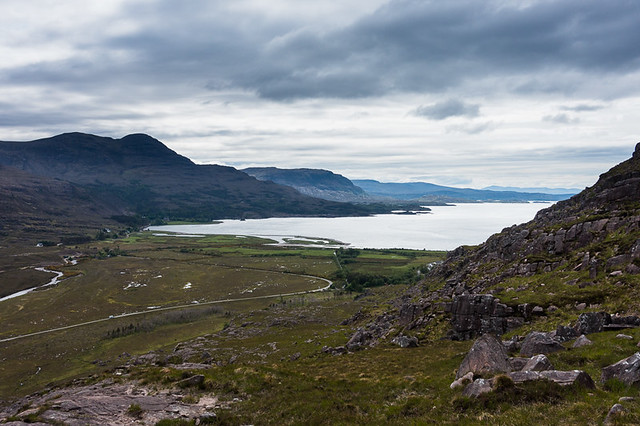 and then over the most luxurious deer fence stile I've ever seen.... 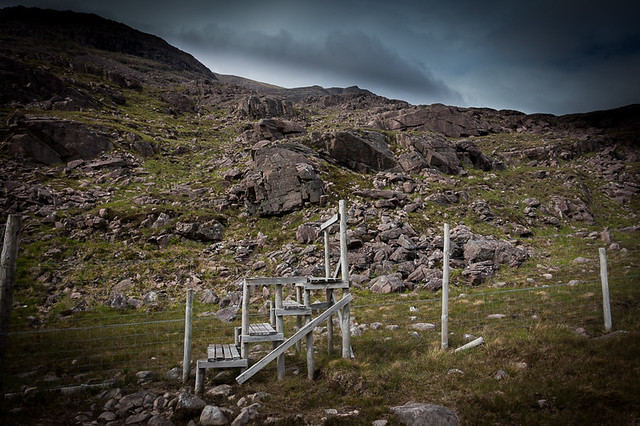 before eventually depositing the tired walker into a short stretch of bog before reaching the road. This mountain has to have the last laugh. Leaving the car at the descent path and avoiding the road walk at the end was the finest move of the day, but overall another great day out, and some salutary lessons learnt about rock holds and scrambling (£65 repair bill for the watch).

Wonderful atmospheric photos, and, as you say, a salutary tale.

Every time I see pictures of the bypass path I think how glad I am that both times I've done it I've stuck to the ridge scramble!

This is such a fine mountain - glad you got at least some kind of a view.

Quite a worrying experience you had there with the piece of mountain, and good to learn it didn't end up worse than it did

Another great report, photos are great even if you didn't get the best views possible.

I bet your heart skipped a beat when you felt that rock giving way, not the best mountain to have that experience on. Glad your ok though, I'll remember this next time I'm on any scrambly bits.