We started off early from the Visitor Centre and headed up Beinn Ghlas in warm shunshine and a nice cooling breeze. One hour and twenty minutes later we were at the summit and being blown around by a howling, ice-cold north east wind. We didn't hang around for a summit picture and kept up a good pace to the summit of Ben Lawers. The wind was even worse here so took a quick glance at the fabulous views and headed for An Stuc. We had done Ghlas and Lawers two years ago in thick cloud so it was great to see the views but I can't say that it was enjoyable to be on these summits today as the wind was frighteningly strong. We learned later that most people had turned back at that point rather than risk the winds on An Stuc's east face. They really did miss a trick as An Stuc was the only part of the walk where there was no wind!

This was our first time on An Stuc and was quite a challenge for us as we don't scramble and try to avoid steep things. The ascent from the west was straightforward and we were on the summit in no time for our first picture of the day. After our first short rest of the day we bit the bullet and headed for the cliff edge descent towards Meall Garbh. This was not a comfortable experience for any of us as it was by far the steepest and most exposed descent any of us have attempted. I was surprised at how loose the rock is and couldn't help thinking that this must be easier to climb up than it is to get down. It was agreat feeling to get to the bottom and look back at what we had just come down. 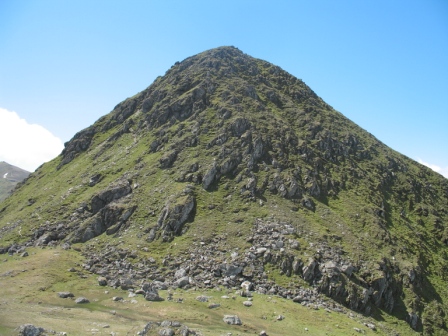 Time for lunch. We were enjoying being out of the wind but as soon as we started to ascend Meall Garbh it was back. As a devout non-believer I started to question whether or not there must be a God who had decided to turn the wind off for 45 minutes to allow three novices to get up and down An Stuc

We had originally started out to do the four to Meall Garbh and then return to the car by the same route. Somewhere between An Stuc and Meall Garbh we changed that plan and decided to head for Meall Greigh and descend from there to the Lawers Hotel. How we would get back to the car was a problem we decided to leave for later as we just didn't like the idea of being back up on Lawers in that wind. Meall Greigh is a desceptively long haul from Meall Garbh but there is nothing difficult about it. The descent of the grassy slope is steep but straightforward and the strength of the breeze down at that level meant that the midge count in the woods at the end was quite low. When we got to the hotel we managed to blag a lift back to the Lawers Visitor Centre from some very nice guys who had just walked the same route in about 2 hours less than us old guys as we took quite a few little breaks just to get out of the wind. If you happen to be reading this: thanks for the lift guys - you saved us a very long walk back

Hi,
Well done guys, love the photos. I did the Lawers 7 last week in the mist/cloud and never got a summit view. looking at your photos I can now see what I climbed.
Coming down An Stuc that way is a nice scramble but there is plenty of loose rock and when wet it was slippery and muddy in places.
Glad you got a lift back from Lawers hotel to the start that would have been a big hike.
Cheers.

Hi Derek..,
Nice report. Its nice to get out in the sun and get good views form the summits unlike Marks report of the 7.

I was out yesterday and there was a cold westerly blowing which was quite strong on the tops. When I done these 5 last year I biked from the Lochan to the Lawers inn and walked the opposite way to you. This meant the scramble up An Stuc didn't seem hard at all but it sounds like a nightmare going down it. Well done

You should have told those guys, who did it 2 hours quicker, that if they had taken their time more then they would have seen the birds of prey/beer stash/Swedish girl hikers/treasure/what ever else you can think of too

Great you got a lift at the end though

Hi Derek T
I think we met you on the way down, there were 3 of us with the young girl leading the way.
We turned back after doing Lawers and descended at the Beallach heading back to the Lawers hotel, eventually hitting the path to the hornmakers.
Did you hear anything about the poor guy who came off his bike?

GMP01 wrote:Hi Derek T
I think we met you on the way down, there were 3 of us with the young girl leading the way.
We turned back after doing Lawers and descended at the Beallach heading back to the Lawers hotel, eventually hitting the path to the hornmakers.
Did you hear anything about the poor guy who came off his bike?

What a small world this is

My son, Ross, went down to see the crash when I was away picking up the car and he said that one of the bikers was up and walking but the other was still down with a bashed-in helmet when he left. I hope he was OK. I used to have bikes myself and always wince when I hear of these accidents as I was lucky enough to walk away from three myself but was a whisker away from another story each time.

Hope to see you on a hill again some other time

weldone, cracking photos. its cracking views up there on a day like u's had..