So it was an early start, up at 4.20 am for our trip to Ben Cruachan, me, Jim his neighbour Joe, and his mate Robin, two really experienced walkers , they can actually read maps , seriously they are. We started off about 7 o`clock from Cruachan Falls railway station and headed up under the tracks and up the steps into the forest. It`s an instantly steep climb for about twenty minutes walking up the hillside. It eventually becomes less steep as you had up towards the cruachan reservoir, and the dam is a sight itself. To the sounds of sheep baaing, sheepdogs yelping and the farmer yelling we climb up the ladder to the top of the dam where the baking sun waits for us. So off with the zip offs and the fleece for the last time today. We faced out to what we hoped to achieve, going around the horseshoe to take in ben cruachan and stob diamh, with the reservoir lying in front of us. We decide to hit the hill early and climb up the steep slopes, Jim and I going for the more direct route, the others working their way around slowly. There are great views looking back over Loch Awe and as there is hardly a cloud in the sky, we can see peaks of mountains all around, it`s going to be a good day.

eventually we work our way up to a path running alongside an old fence and get up to Meall Cuanail from where we can see the peak of ben cruachan and the path of the alternative (easier ?) route, as well as great views for miles. pray to the mountain god We get to the top and it`s just stunning, probably the best views from a mountain i`ve ever had, clear blue sky and hills and valleys everywhere. 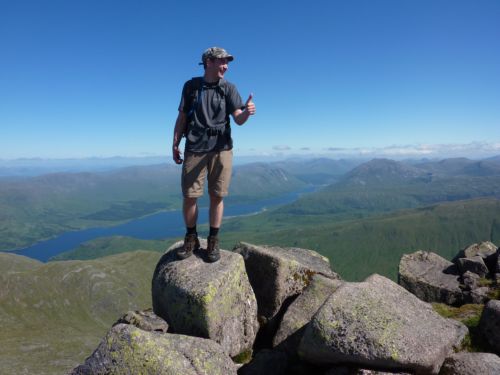 On top of Ben Cruachan This is where the fun begins as we head along the ridge. It`s great walking along the tops of the hills and there`s a few hairy moments as we climb up and down the rocks and get to the top of Drochaid Ghlas. As we munch on sandwiches and biscuits Joe tells us that we best head down as he`s on a schedule, some instructions from the wife more likely, and we head down towards Coire Cruachan slightly dissapointed that we won`t be bagging Stob Diamh as well. [
So we head down the coire and back along the reservoir and the heat is getting unbearable. But it was a great day and we`ll be back to do it agin, and complete it. 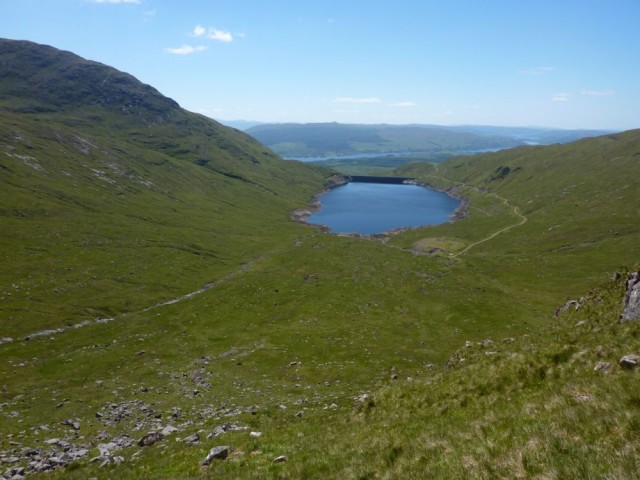 Hi Tomy....
Nice report with some good pictures. The weather is great for walking at the moment. Nice pose on the summit

You were practically on top of the second munro lol. You could have been up in ten mins

The weather is great at the moment & the views are stunning indeed. I off to Cruachan next saturday so heres hoping the weather holds. The first weekend of the school holidays usualy rains!! I was in Arrochar myself first time not drenched.

Have to agree with Milesy, you could have been up to Stob Diamh and would have just been as quick coming down and rejoining the path...still gives the excuse to go back up this lovely mountain

Milesy wrote:You were practically on top of the second munro lol. You could have been up in ten mins

audreywaugh wrote:Have to agree with Milesy, you could have been up to Stob Diamh and would have just been as quick coming down and rejoining the path...still gives the excuse to go back up this lovely mountain

this bugged me all the way down a bit, especially as i was down half an hour before the last of the party but like you say, it gives me another chance to go up there

Milesy wrote:You were practically on top of the second munro lol. You could have been up in ten mins

Seconded, reckon would only have added 30 minutes overall to the trip if they had just busted on! But who am I to say when I'be no been on the hills for 3 whole weeks!

Not only that, but I've no idea how you got down where you did - I seem to remember looking down your descent route for an escape route at the time and couldn't see anything feasible! I'd like to do the round again now I'm a bit more Munro-experienced to see if I still find it all scary (I think I'd be okay with it now). Great photos - you look to have had superb weather - we hardly saw anything really...