This was an afternoon walk (from noon to 5pm) as an attempt to make the most of the weather conditions. A lot of rain fell the previous day and though the forecast was less wet, there were still blustery conditions lower down, with strong winds predicted higher up.
That ruled out the Arran Corbetts for me, but I hoped that things would be easier going 500 feet lower down. I opted to add an extra hill (Meall nan Damh) for several reasons, from gauging the weather - and stretching my legs - to thinking that it looked like a natural part of the route.

These might be modestly-sized hills, but the metres do start from just above sea level, so every one counts. Two other walkers arrived and set off from the parking in Pirnmill at about the same time as me, though I split from the usual hill route (which is marked, at least lower down) to take a track northwards. My approach route could certainly be improved upon. There's a signed path towards Thundergay, which would hopefully avoid some of the wet moorland, then my contouring the side of Meall Biorach (The rounded pointed hill?) Instead, I left the areas of pasture and struck out uphill over some very soggy ground. The going was quite wet thanks to the heavy rainfall that had kept me confined to Brodick the day before. That encouraged me to head further uphill to 300 metres or so. Things improved on higher ground and passing Fhion Lochan, followed by the gentle rise of Meall Bhig.

This brought me to a smaller lochan where a pair of birds (looking like Goosanders) kept a wary distance. Meall nan Damh looked like steepish climb, so I picked some a grassy slope on the west side that provided an easier approach. There's a diagonal that rises northwards, not heading directly for the top but helpful in avoiding some almost-crags facing the lochan. This is quite a rugged hill - and not far beneath 2000 feet - so provided a decent viewpoint for the rest of the walk. I had a brief break for an installment of lunch and to decide what direction to head next. I chose to descend the middle of the hill (near to the centre of the next photo), picking between steeper rocky ground. That wasn't a great route, especially with the grass still damp; retracing my ascent (though that was further away) or the southeast shoulder might be better going.
I picked up something of a path while crossing the lower ground east of Meall Bhig and heading up the north ridge of Beinn Bhreac. This is well-drained, with solid ground to give a reasonable footing but quite a gradual ascent. The ridge became more exposed to the wind as I gained height. Pausing to take a few photos from a sheltered spot, I noticed a curious rock formation. Is it just an over-active imagination, or did it resemble the long-snouted creatures carved on Pictish symbol-stones? The clouds were greyer and breeze stronger along the ridge, especially bustery while crossing Bealach an Fharaidh. There's enough bare rock to make this a rugged hill (and dry underfoot) without requiring the use of hands. One ridge northwest of Mullach Buidhe does look like a promising scramble, though seemed a bit too exposed to try, especially to descend, with the weather on that day.

I caught up with the same two walkers at the summit and trig point, where we shared some shelter and a brief chat. They corrected me on this being the highest point of the ridge, though I still wanted to visit the southern Top with its miniature tor.
That proved even closer than it looked, so I was soon following a path down into Coire Roinn. The path gets fainter - or, I became distracted and wandered off track - but the descent is easy, though it gets wetter halfway down. There's a vehicle track to follow, though it's best to cross the stream shortly after a small water collection system at about 200 metres. Beneath that, the sides grow deeper and turn into a tree-clad ravine, pleasant to look at but I expect much less enjoyable to cross. 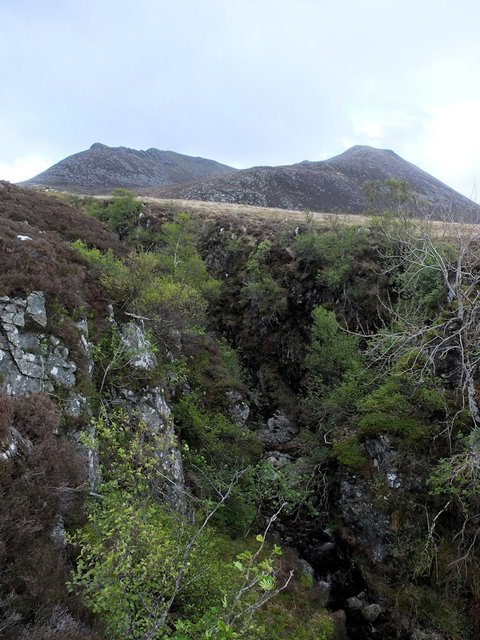 There's a clearer path on the north side of the stream as it descends to some fenced pasture land above Pirnmill. Only the foolish and/or easily-distracted would wander from that and through the birchwoods, but I eventually rejoined the main path / track after a minimal amount of squeezing among trees.