Beinn Pharlaggan by the construction site

Beinn Pharlaggan by the construction site


I'd set off fairly early, and was forced to wait for the clag to clear a wee bit, so I visited some old haunts from my student days when I spent the summer of 1973 on industrial training working for the Hydro Board ( Now SSE) based at Tummel Bridge. Took a wee keek at Gaur power station to find it almost the same as it was then ! 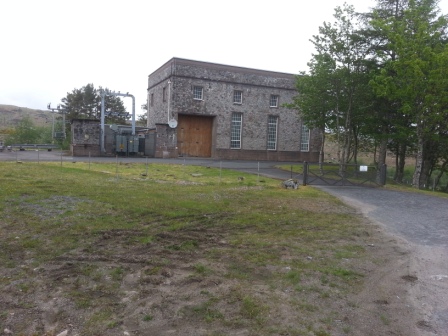 The clag was still well down, so I headed to Rannoch Railway station to see if the cafe was open.
I'd never been to the station before so it was interesting to eventually see this place at the end of the road.
Whilst devouring a cup of tea and bacon butty, some photographers came in and followed suit. They claimed that it was so cold that no wildlife was moving to photograph! Had a wander up the platform to Renton's memorial plaque before returning to the car. As I parked up beside the track heading up towards Pharlaggan and Corrour, there seemed to be some construction activity. Anyway, I biked up the track until I met some workies in a pickup truck, who told me that they were building a hydro scheme, taking the water from Alt Eigheach from about half way up the glen and passing it through a new power station into Loch Eigheach. Leaving my bike at the old track end I walked up the old path until it merged with the new access road, which by now had nearly reached the position of the new intake.

There was quite a few diggers and dumper trucks on the move. I was quite impressed by the way they had happed the sides of the new road up with the material removed from the drainage ditches lining the road. One of the workies mentioned that after construction was finish, the track would be reduced to 2m wide. Happing up the road margins Digging out the Eigheach intake

I'd also been told that they were making a new road through to Corrour, which they were currently working on in parallel to the hydro project.
Leaving the machinery behind, I walked up the glen a wee bit then crossed the burn and headed up Pharlaggan.
The alpine plants were taking advantage of the recent warm spell to put on a spurt of flowers, although today it was anything but warm, with a biting Nwesterly whistling over the top. 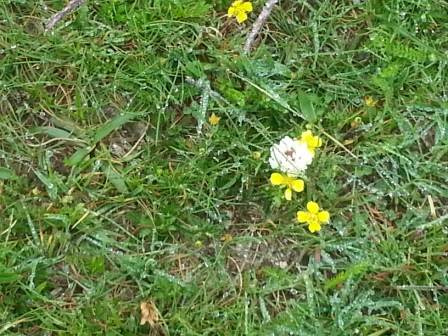 Didn't hang around on the top in the cold & clag, so with nothing to see, headed back down to the construction site - the sounds of which were still audible from quite high up on the west slope of Pharlaggan. Near the top of Beinn Pharlaggan

Back down on the new road, I avoided the dumper trucks and followed the road down to the bike, noting the new road heading off to Corrour. The new surface on the road made the return trip on the bike a bit bumpy.

On the drive back to Pitlochry, I stopped to view Rannoch & Tummel Power stations.
Someone in SSE seemed to have got a job lot on Cream paint from B&Q, as both were gleaming like beacons - not at all in sympathy with the surrounding countryside ! 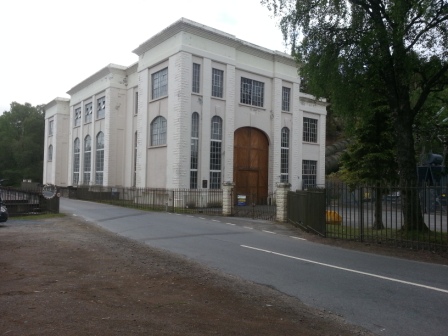 I must ask SSE why they need to do this, when most PS's are finished in natural stone which blends into the countryside ! A quick swing round to Errochty Switching station where I was based in '73, confirmed that it had hardly changed since then apart from a new transmission line entering the compound. Back to the hostel for tea.

Addendum:
Confession time - Went to the wrong top of Pharlaggan - DOH ! - so will have to return to do Meall na Meoig. Didn't check the Walkhighlands data, which would've directed me to the correct top- just thought it was a subsidiary top of Sgor Gaibhre - what a plonker!
Looking on the bright side - the road up to the Eigheagh intake will be finished by the time I return, so will get my bike up most of the way.
I complained to SSE about their "Cream Soviet style edifices". The Generation Engineer phoned me and explained that the buildings were listed and because the original 1934 power stations were rendered, they had to be painted with the agreement of the local planners. Obviously the work of an Eco-mentalist in the planning dept !
Addendum II
Returned on 10th May with my buddy Gordon. The workies had all but completed laying the pipe to the turbine house, which was well camouflaged. The last bits of the pipe were being buried and covered by peat so that apart from the fresh earth, it was difficult to see where the pipe ran. Set off up Meall na Meoaig from the intake and was met by a warm blast of air on the top - a fairly rare phenomenon in Scotland !
Honour restored - sort of !

Re: Beinn Pharlaggan by the construction site

Not a new road to the Isles then.

I too have been aware of the improved track making ....well I have on one occasion. I guess it depends on who does the job. There are folks who work the diggers who do take a pride in doing a job which is not an eyesore. Or is it just a case of getting what you pay for?
I think that John Renton was the man who used his own money to keep the railway construction continuing across the Moor.
One thing you can be sure of for this hill and the nearby Stob an Aonaich Mhoir is having usually a quiet day out in the hills.

For me reaching these hills in later life was after a gap of over fifty years after reaching the loch with trout fishing folks when a youthful angler.

Re: Beinn Pharlaggan by the construction site

It seems this type of track construction is relentless at the moment - I saw a new one being built across the plateau from west of Mayar. Its a shame they can't get rid of them after constructing the hydro project but I guess access is needed; these tracks open up the moorland nicely for all sorts of activities like shooting and probably a few wind turbines.