oh well one was still worth it :O)

oh well one was still worth it :O)

Munros included on this walk: Carn an Righ

Carn an Righ 20150628.gpx Open full screen  NB: Walkhighlands is not responsible for the accuracy of gpx files in users posts

I had high hopes to do Carn an Righ, Beinn Iutharn Mhor and Glas Tulaichean, but had work and a couple of other essentials to do in the morning and when I arrived at the parking spot a supermarket delivery driver pitched up to have his lunch, but decided to talk to me instead. Was an interesting chat, but hence I was setting out at about 4pm

(there is an area at the beginning of the entrance road where the recycle and rubbish containers are stored, there's plenty of parking)

I pumped up the tyres on the bike as it looks like a good road and now I'm late I want to make fast progress. Harder tyres make it easier to push and go faster, down side is a reduction in comfort

It' a tarmac road for just over half way in, so minus the stopping to take photos progress is reasonable.

This could so easily be a report about bird sightings

Just after the cycling through the farm a robin followed me for a while.

Shortly after the farm are the sheep pens, proper sheep pens these, with properly lots of sheep 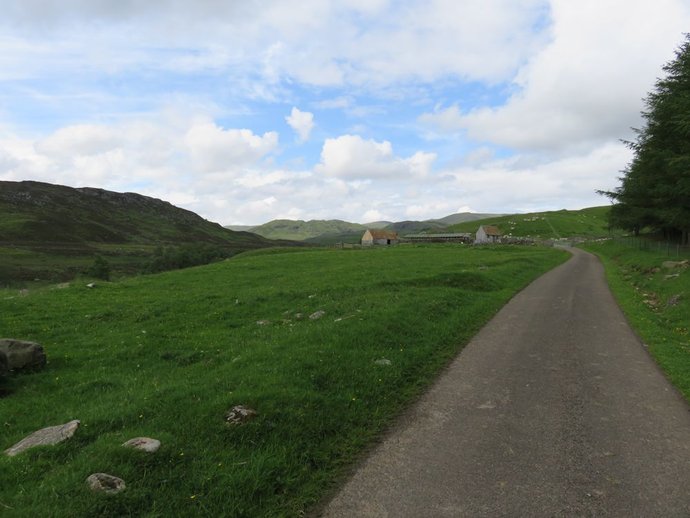 As you can see a nice tarmac road. Made my way through the sheep and into the first dip where a small scale hydro plant is whirring electricity presumably directly to the grid as the feed will be Loch Crannach which has a small damn. Wonder how many MWH it generates in a year

You can just see the outflow bottom right. 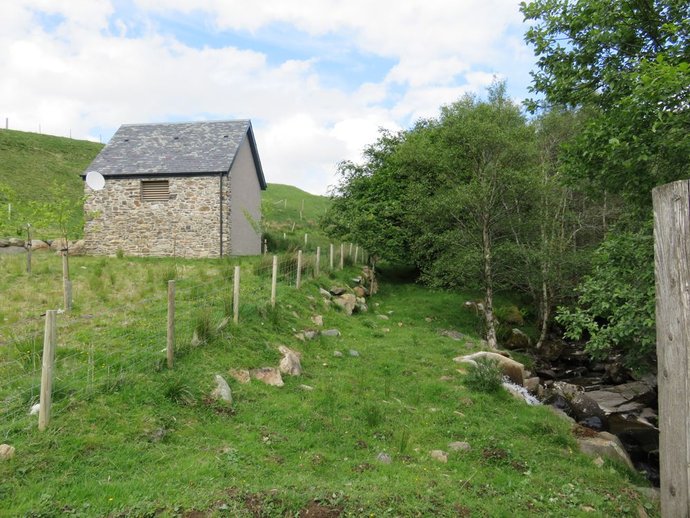 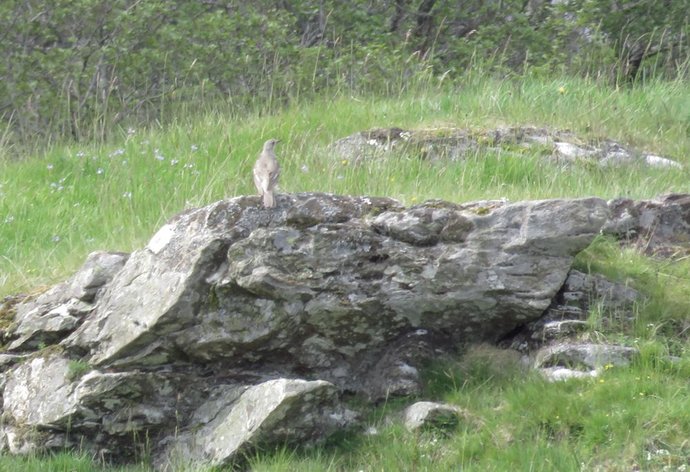 sorry about the quality of the photos, I am trying to get to grips with photography, but animate objects don't tend to stay still for very long

Slightly further along and a heron moves from it's fishing spot on hearing or seeing me. By the time it lands it is way too far away to get a photo.
Round the next bend in the road and an eagle flaps off heavily onto a more distant rock and cries to me mockingly; stop bike > reach into side pocket of rucksack > get camera out > turn camera on > try to find subject with zoom > etc > nae chance

Over the bridge and the road isn't quite as pristine. Nice little chicane through the rocks and on the other side several camp sites and campers on the grassy flat. 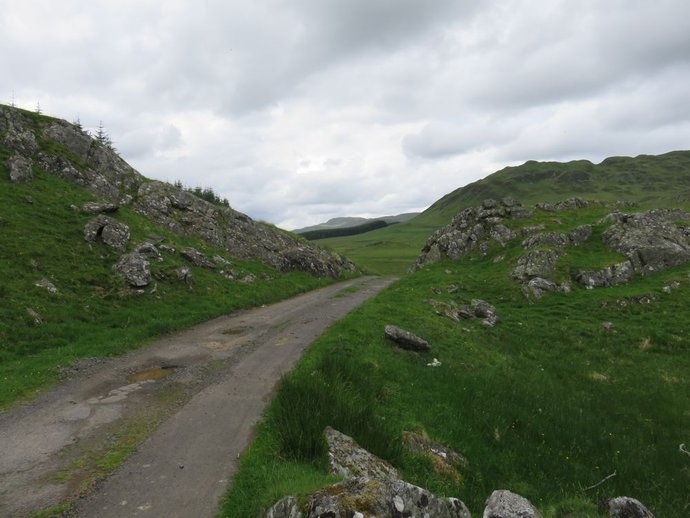 The road steepens and there are lots of waterfalls 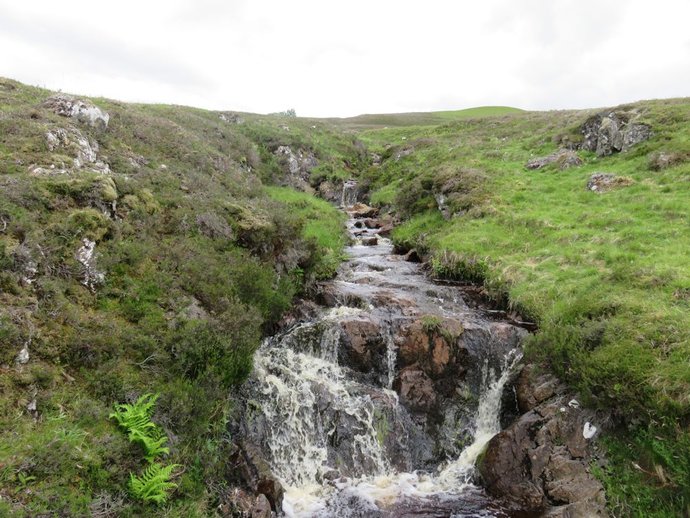 and the scenery is improving with a first view of Carn nan Gabhar. It's impressive, will get more so and become one of the major attractions of the route. 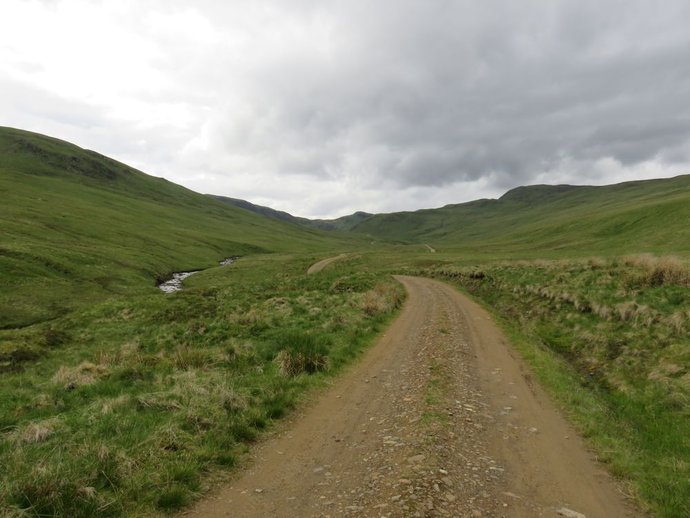 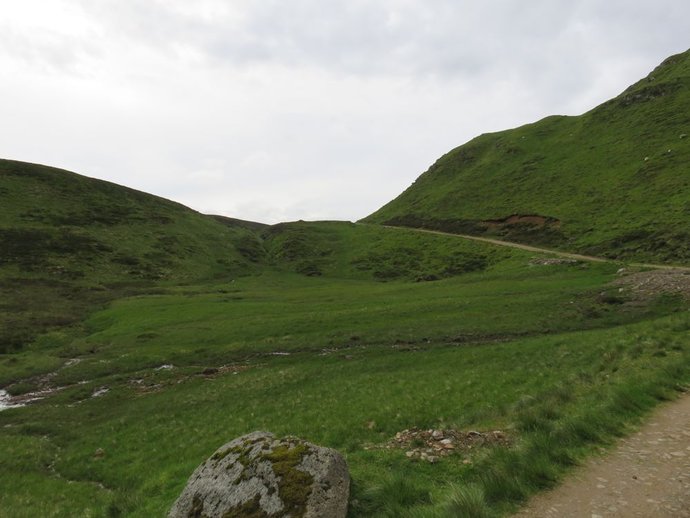 If I'd managed the complete intended route I would have come down the ridge from Glas Tulaichean to the pass here and back down the track to the start of the walk at the bridge. 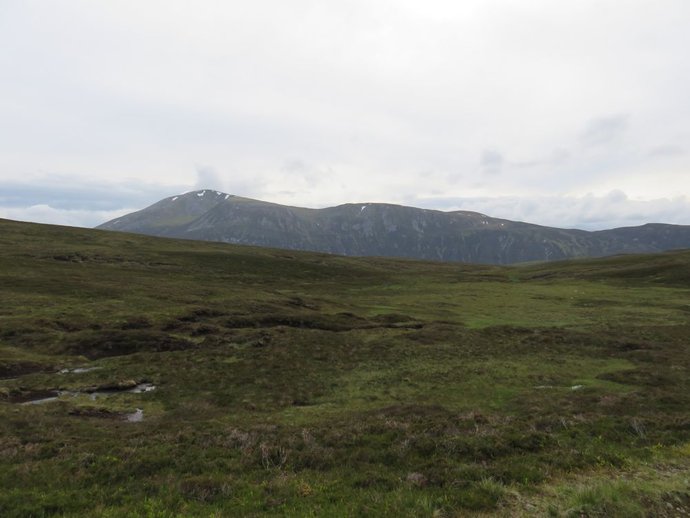 and Carn nan Gabhar summit zoomed from the pass 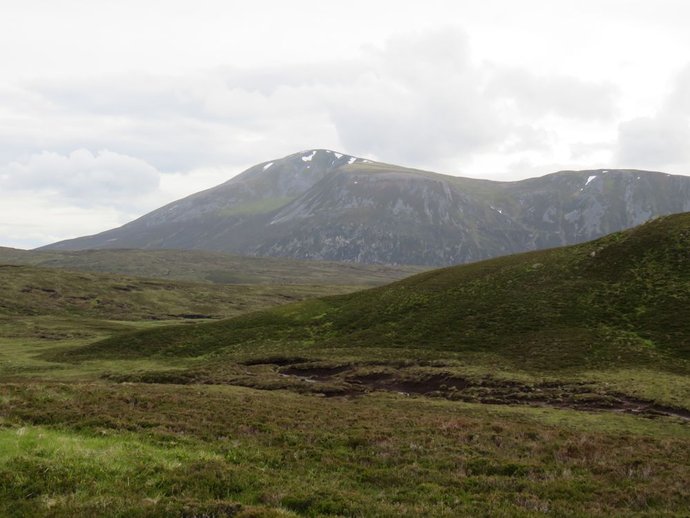 and a few metres later a first sight of Carn an Righ and a very big grin, fantastic 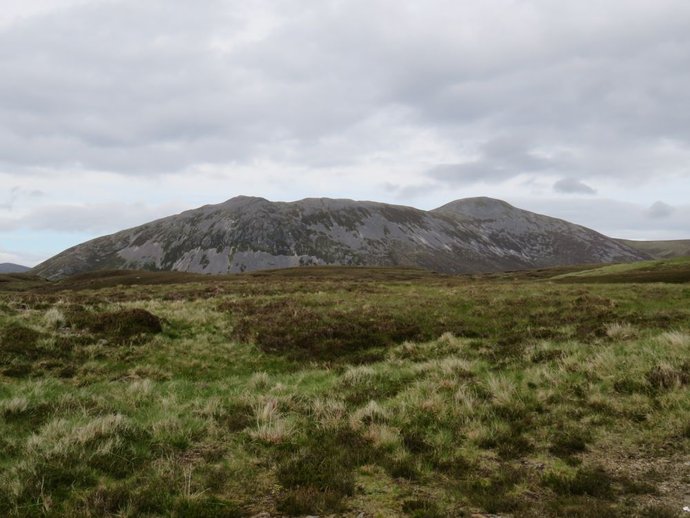 and equally fantastic in the opposite direction Carn nan Gabhar

The track dips into a gulley, across a bridge over a burn and at Cnapan Liath the view of Carn an Righ with Glas Tulaichean in the background 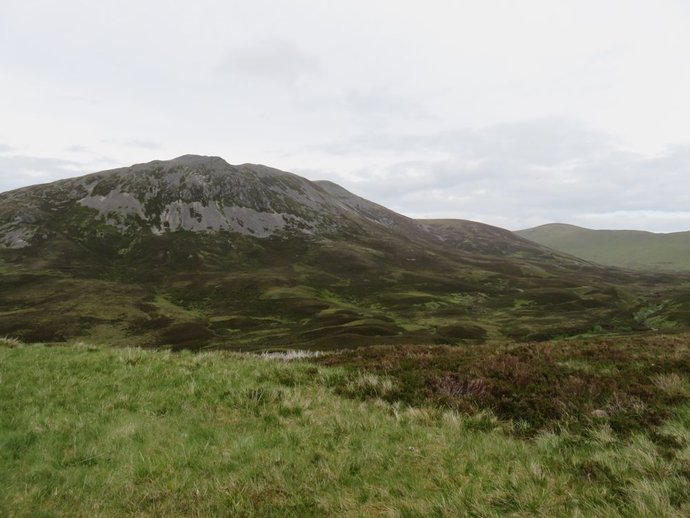 When planning the full walk I had considered coming off the ridge early and crossing upper Gleann Mor to traverse Carn an Righ; looked fine on Google Earth

As you can see though it would have been very hard going over the drumlins and a rocky side of Carn an Righ.

The track drops steeply down to the bridge and waterfall where the Allt a'Ghlinne Bhig meets the Gleann Mor and where I intended to start up Carn an Righ. A relief to be going downhill, but also the knowledge that I would definitely be pushing back up again for much of it 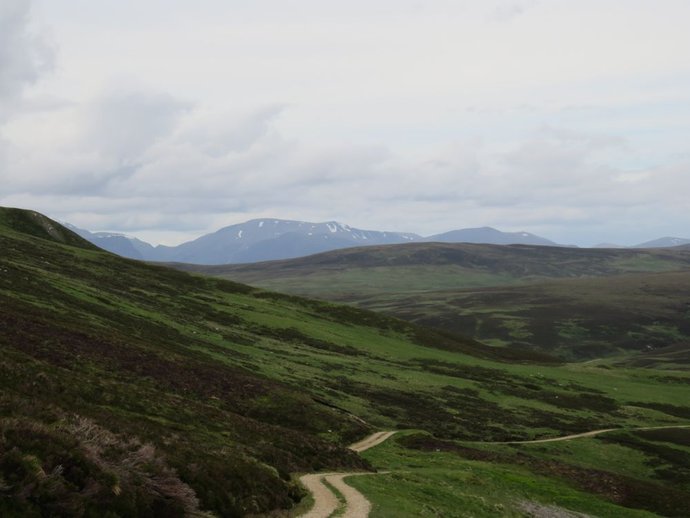 Some nice views of the Cairngorms.
I was also still thinking, go with the flow you may still be able to do all three, even if you make it an all nighter and take your time, but in my heart I know I am only going to get Carn an Righ Found a place to hide the bike a little upstream, chained it up, sat on a hummock and had something to eat before making my way up Initially there was a lot of aerobic heather hopping over the larger clumps, but nothing too drastic and I'd spotted a path up once it got to the first steeper assent. Plenty of frogs around Got to the path and no evidence of boot prints, but plenty of hoof marks. Anyway it's a reasonable path and I make good progress. Decided to traverse inside the corrie rather than doing the full ridge taking in the cairn at Stac na h-lolair, probably worth the effort if I'd had time Another song bird darted around me on the way up, but as before, tantalisingly not quite close enough to get a decent photo for identification. plenty of nice alpine flowers as well.

The main attraction looks great, but also quite a steep final assent Got to the top of the ridge just below the summit and the wind is chilly. Put on gloves and woolly hat and on up Got to the summit and views all round.
To Carn nan Gabhar which is the dominant feature Decided to come down the other side of the corrie. It is steep and the rocks unstable in places.

Back to the bike, still there, phew Very calm and pleasant in the shelter of the gulley by the river, but I could sense the midges yawning and waking up as well as the darkness that would soon set in. if I could get to the tarmac part of the road before twilight I wouldn't need to slow down or rely on the head torch

Unchained the bike, packed up and started the assent back out. hadn't gone far when a mountain hare zoomed up the drainage ditch beside the road while I was peddling away in low gear

Still it was fun to watch

Not long before I am off and pushing up the steep section just after the next bridge crossing.
How big and symmetrical do you like your drumlins Got to the pass and distributed three owls

I know what the silhouettes of owls look like and also that they make no noise, but three

didn't think the worked as teams

Anyway they definitely looked like owls; perhaps they were eating frogs.

Got on to the steep decent and and winging it back down, the hard tires a bit jarring now

Disturbed some lapwings, they do make cries and there's no mistaking their particular flight pattern or silhouette.

A few groups of sheep tried racing me along, but they are no match in downhill mode

The midges are though, clouds of them at every bridge crossing. I must get a pair of those clear lens glasses

Got back the whole way without having to use headtorch; just

Would really like to have been up early and taken my time to do the complete three Carn an Righ, Beinn Iutharn Mhor and Glas Tulaichean, but as I say even if you just cycle in you will see some spectacular scenery.

Re: oh well one was still worth it :O)

that was a good read, enjoyed reading about the wildlife and seeing this hill from a different direction from usual

Re: oh well one was still worth it :O)

mrssanta wrote:that was a good read, enjoyed reading about the wildlife and seeing this hill from a different direction from usual

Thank you mrssanta, would have been a great way to get all three, but I really enjoyed what I got.