Mid-week weather watching had us weighing up various routes in different areas, but we finally settled on a 4-Corbett route from Glen Feshie to include one of the most remote summits, Beinn Bhreac. Realising that Fhidhleir and Sgarsoch were really quite close (when looking at the map - zoom out far enough and everying is close!), Scoob came up with the bright idea of adding these 2 Munros to our route

The WH description of both of these Munros calls them 'unspectacular'... but our day was far from that! After a 10km cycle, a barefoot wade across the river, then a 14km walk, we could just begin to see our first target!

Climbing up the shoulder of An Sgarsoch we could see over to Geldie Lodge, finally reaching our first summit cairn almost 6.5 hours after leaving the car park. 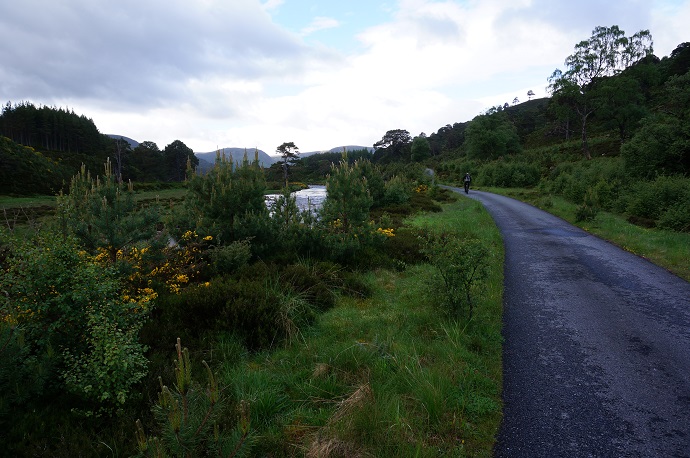 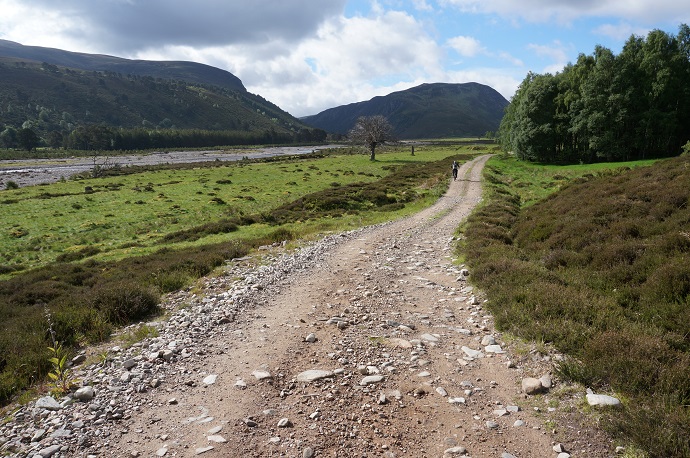 cycle in finishes on more bumpy ground after the Lodge 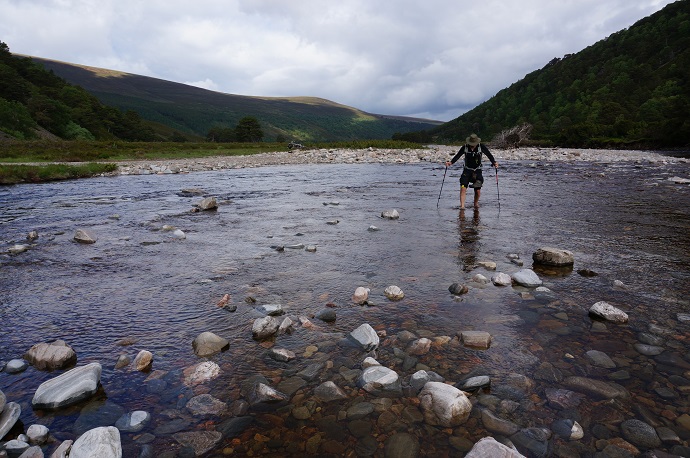 river crossing - above my knee height in the middle; glad I'd just carried my trousers over too! 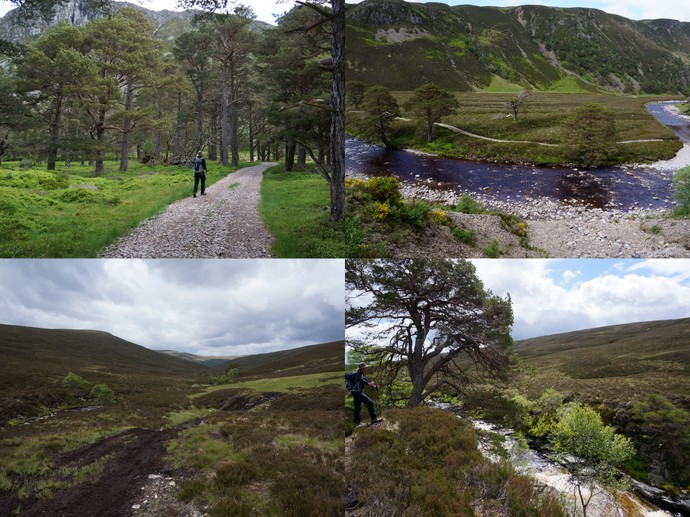 beautiful area, made the hours of walking in pass quickly 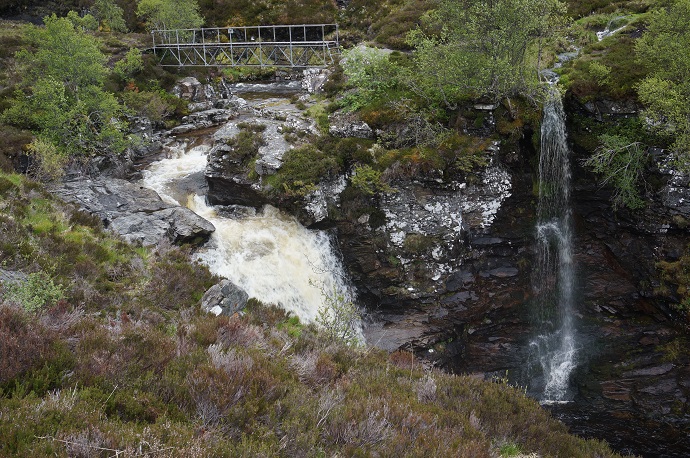 finally made it to the big waterfall marked on the map 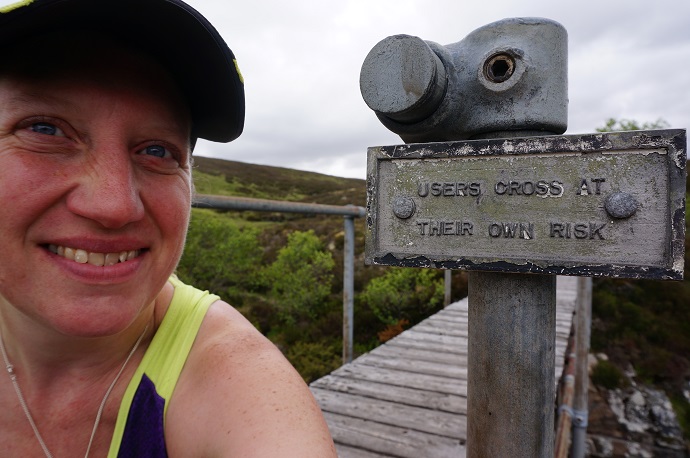 Helpful - at least we didn't have to de-boot again! 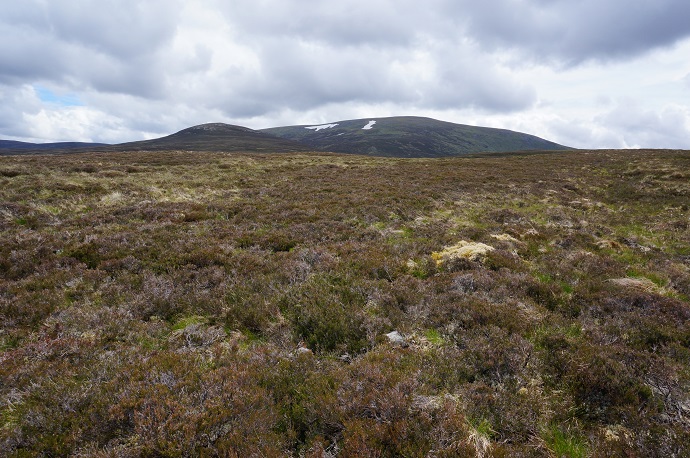 An Sgarsoch now almost in full view, although still a fair way to go! 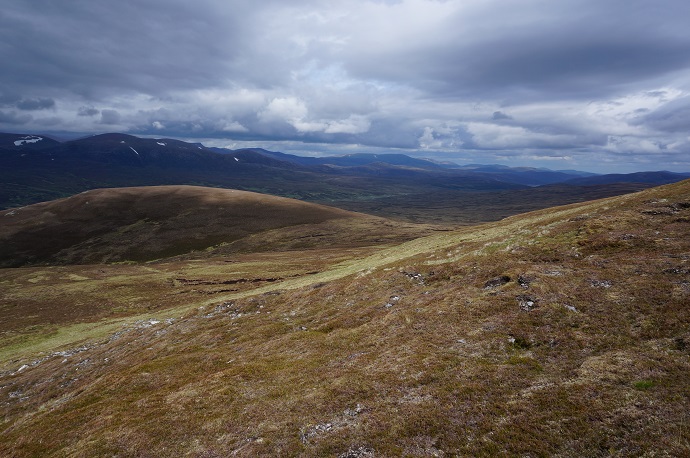 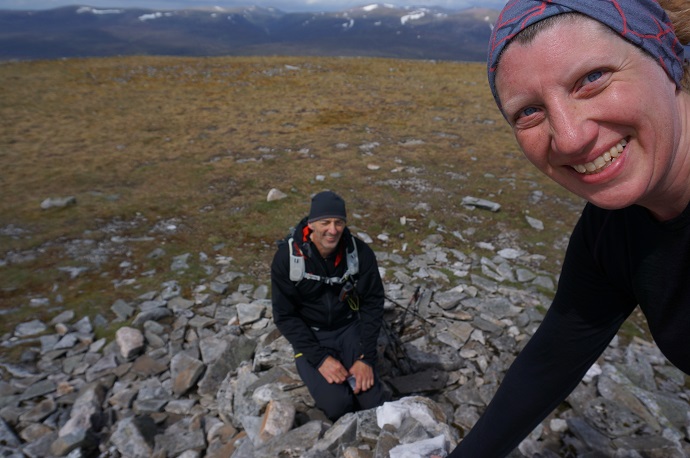 An Sgarsoch summit at last!! :)

Long since figuring we wouldn't be going for all 4 Corbetts on this trip, we could now see the route ahead. Still plenty of daylight so we set off for the next Munro and planned to continue for at least the 1 Corbett, since Beinn Bhreac was our original target and all the rest were just 'add ons' around it

I was most keen to come back off of Bhreac along the reasonably flat plateau to Leathad an Taobhain as that would give us a second Corbett thrown in to what would be a very long walk out regardless. Another lesson in paying closer attention to the maps though, as that plateau turned out to have many ups and downs as well as endless peat hags. There were some interesting finds though, and even the occassional piece of flatter ground 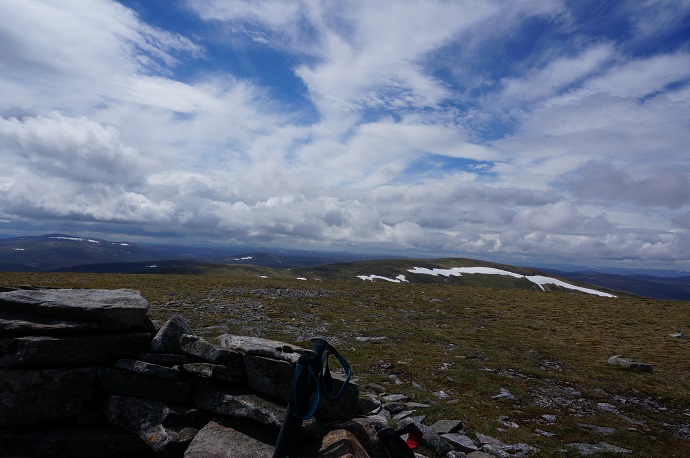 view to Fhidhleir, our next target 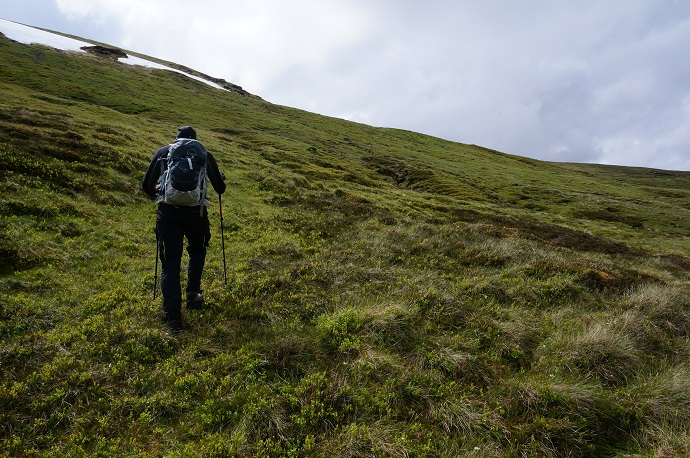 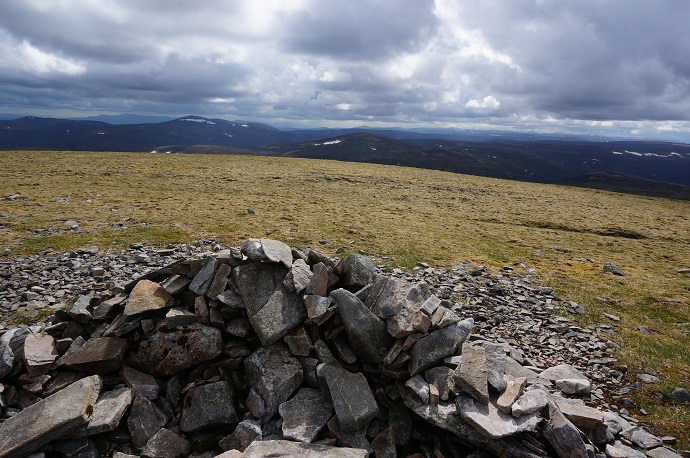 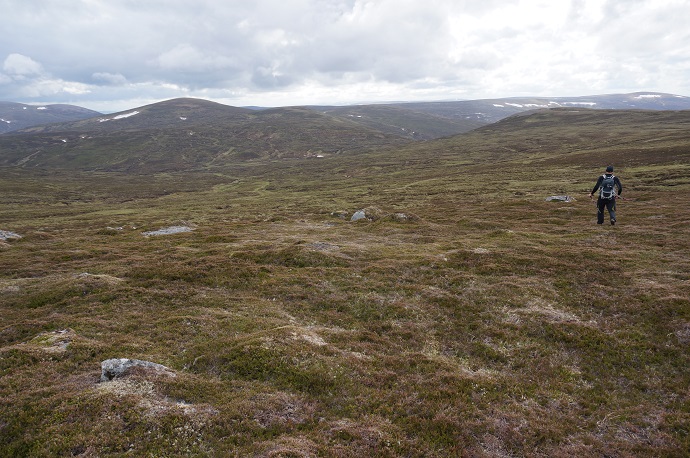 heading towards the even more remote Beinn Bhreac 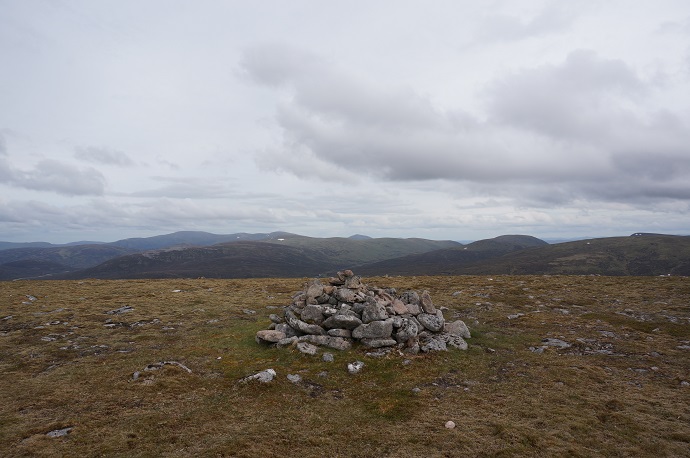 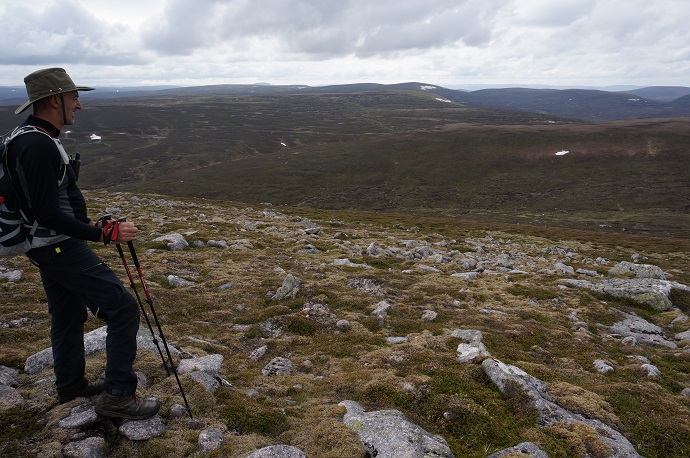 LaT in the distance - that plateau's not looking quite so flat now! 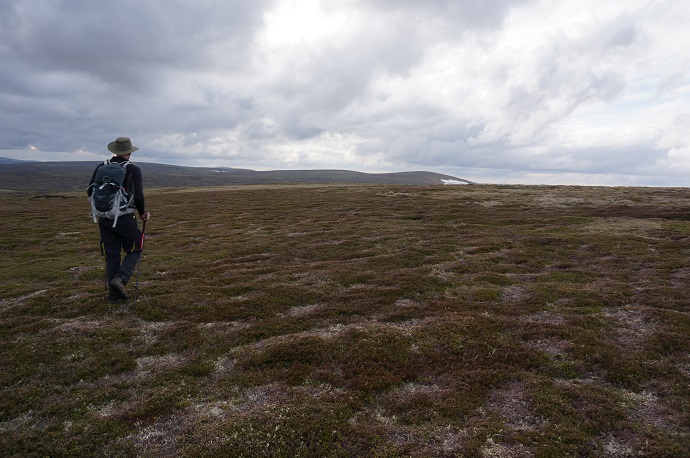 a small 'get your breath back'/relief section :) 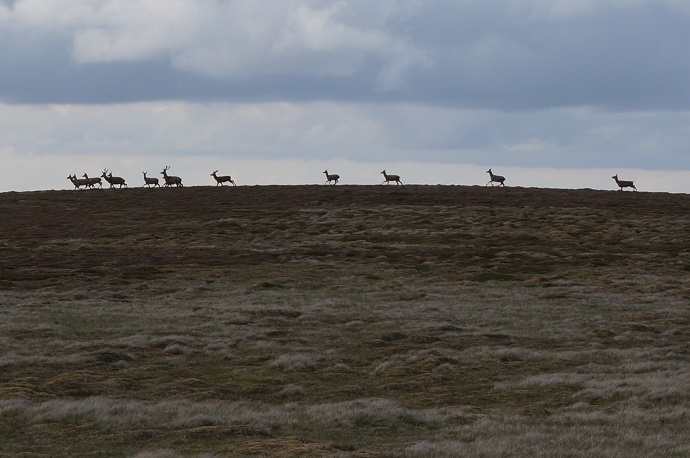 surprised we hadn't seen any deer before now, although there was plenty of space for us all out here! 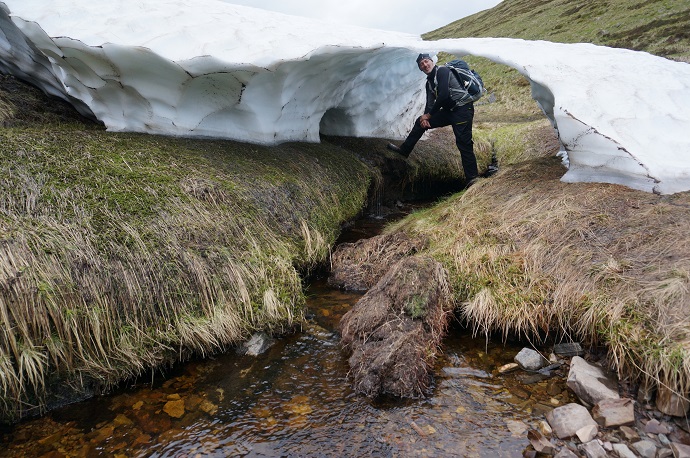 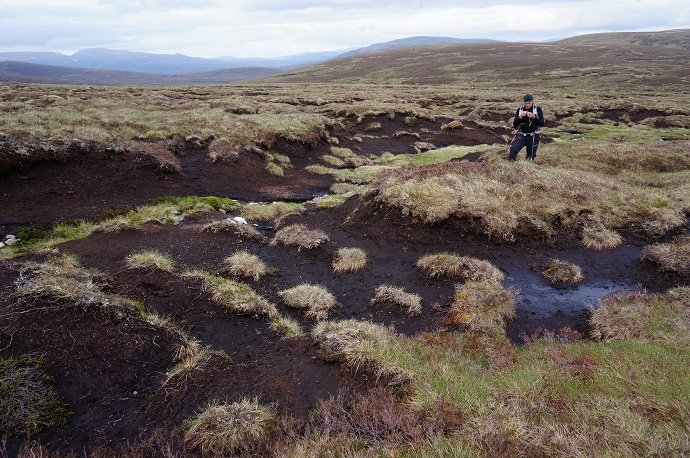 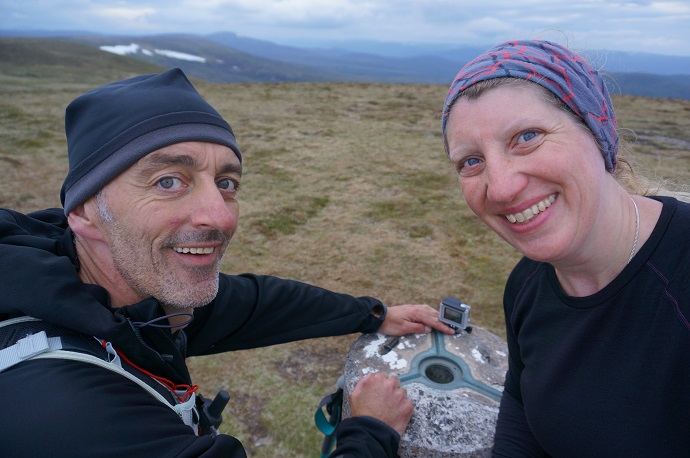 Leathad an Taobhain summit, woohoo!! Still smiling so can't be that bad :)

So now we only had one top to climb over to pick up the long landrover track back to the bikes. Realising we might not get back to the bikes before sunset at 10.15pm we kept pushing on. Hadn't thought to bring head torches with us today and we didn't have lights on either of the bikes

However we reached the bikes at 10.30pm, cycled over the rough ground that made me feel like I was being violently shaken (bringing out my tourettes!

) and then finished off with a fantastic cycle on the good tarmac - wheeee! 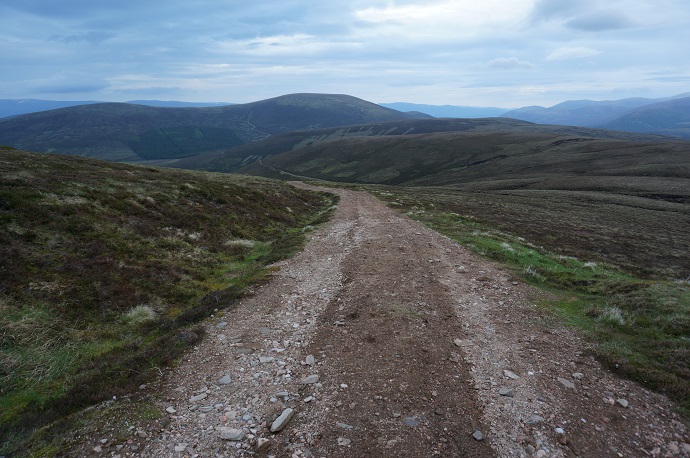 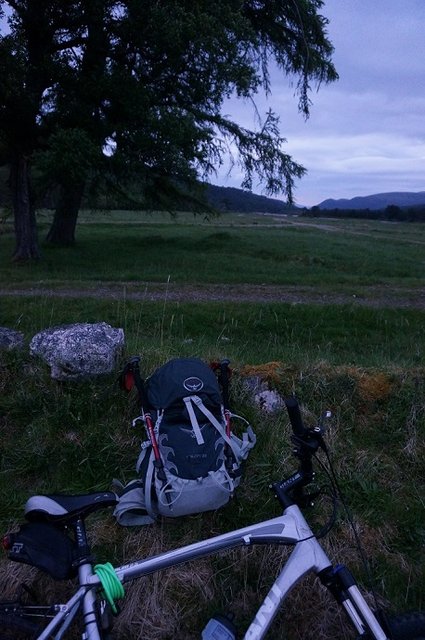 
beinn bhreac.gpx Open full screen  NB: Walkhighlands is not responsible for the accuracy of gpx files in users posts

My feet still haven't forgiven me yet

Nice route, MrsS - good one for the bike too especially as you get to cycle down Glen Feshie

so probably good to stop cycling when you did - cheers

We left the bikes at the best place to make a loop... not sure I'd have gone much further on the rough track but that tarmac road was excellent!

Almost made up for it

Thanks for that , was over a few of these on the Tarff round last week and saw nothing ......A wet , windy miserable hall to Feithe Uaine

That is just too far

while it looks like a fantastic day it's a bloody long way bike or no...can't figure why you two still look so happy throughout

Really well done Fi, I know Stuart will just keep going like the duracell bunny but this is a long old haul

A long day in some remote country - great read! I've been looking at a few reports of walks in this area, and it's seems like the bike is the way to go. I'm full converted to this dual mode anyway!

Glad you got good weather: I too have been scanning the forecasts, but generally it's been looking too unsettled for a long drive ....

Wow thats some walk the two of you have done!

Great pictures of Glen Feshie! But what a trek!

Good plan, if a bit of a long day. Any route that goes the length of Glen Feshie is going to be a good one

In a similar vein, I think Carn na Caim and A' Bhuidheach Beag from Glen Tromie would be a good route too.

Collaciotach wrote:..was over a few of these on the Tarff round last week and saw nothing...

Thanks Collaciotach; I hope that means you're due some views on your next walk!

ChrisW wrote:That is just too far.., I know Stuart will just keep going like the duracell bunny but this is a long old haul

Alteknacker wrote:... it's seems like the bike is the way to go. I'm full converted to this dual mode anyway!

Thanks Alteknacker; definitely go with a bike! Hope you also get the weather

Mountainlove wrote:Wow thats some walk the two of you have done!

Silverhill wrote:Great pictures of Glen Feshie! But what a trek!

Thanks ML and Silverhill! Certainly felt like a big walk but loving the long days while they last!

malky_c wrote:Good plan, if a bit of a long day. Any route that goes the length of Glen Feshie is going to be a good one

In a similar vein, I think Carn na Caim and A' Bhuidheach Beag from Glen Tromie would be a good route too.