I reached the walkers' car park at Attadale soon after 8:30 am, finding several cars already there and one driver brewing up. The morning was bright and already warm, though the MWIS forecast warned to expect cool conditions higher up.

I largely followed the WH route (and recommendations of the handy map board in the car park), with 2 variations. The first was chosing to go further along the east ridge, including a brief scramble, to visit the second Top of Lurg Mhor. I kept this as an option, in case conditions or my energy level turned against it, but an extra mile looked worthwhile compared to the distance involved in the day overall.
My other modification was to start with Lurg Mhor then descend from Bidean a'Choire Sheasgaich. This was to (hopefully) face the scramble slightly earlier in the walk, as well as take a look at the SW ridge of Ba'CS as a possible descent route. This is a bit lumpy - and so maybe easier to ascend, since you can see what's ahead of you - but the terrain makes a reasonable, if mostly pathless, descent in good conditions and with fair visibility.

All that was still hours and many miles away as I started the walk. Bluebells were in flower (where fences protected them from the sheep) and the lower glen looking fine, especially as I left holiday cottages and other signs of civilisation behind. After a long easy stretch, the track crosses river Attadale and begins to climb more steeply on the southern side. This stretch felt quite warm, especially in the sun and with about 300 metres to gain; views back down the glen offer plenty of excuses for a pause. There are signed routes off to the right, including a path to Killilan, but I kept to the main track as that climbed past a lochan (Loch an Droighinn) and upwards. Therewas some wildlife about, including one stag that chose to pose on a knoll beside the track, but not another soul to be seen. 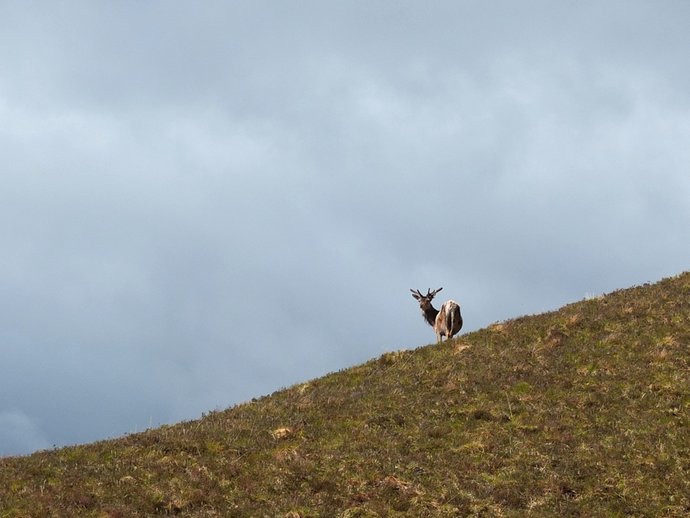 The morning became cloudier as I crossed a bealach, then began a gradual descent. Bendronaig lodge (and bothy) appeared in the distance, dwarfed by the surrounding hills. Bendronaig and the Munros in sight

The track twists right to bridge the Uisge Dubh where that narrows through a gorge, then curves north again before reaching the buildings. This far had taken 2.5 hours, so felt like the ideal time for a break and to refuel. That also provided a good excuse to look around the bothy, which is well-kept and has positively luxurious facilities. I also took the chance to get my boots off and change socks, as I find hard tracks almost as wearing on the feet as walking on tarmac. There was a bike propped up outside, though no signs of anybody else about.

I left the bothy, following its own path a little way and across a stile to rejoin the main track. That fords a small side-burn, then there's a wire-and-wood footbridge to cross. Through this next stage, I studied the slopes to my left, concluding that they should be fine to descend provided that I didn't head due south from Ba'CS and so meet the steep ground of Creag Dubh. The track descends to run around Loch Calavie; the recommended route uphill starts just after several burns at this stage. The threat of losing height was enough to set me ascending slightly earlier. That eased the gradient (though any path presumably zig-zags), but did mean needing to cross some damper ground and a series of allts and their channels. I managed to overlook the path (if there is one), scaling some rougher slopes to reach the easy west ridge of Lurg Mhor. This held several small lochans, some sustained by melting snow, one large enough to feature on the map. I didn't need to top up with water yet, but took in the views which were becoming constrained by a cloud ceiling some way overhead. Ben Dronaig looked fine just across the loch, with other interesting hills of the Killilan forest beyond. There's more of a path evident as the ridge narrows to reach the top. I met my first other walker of the day as he was descending. Like me, he had headed for Lurg Mhor first, though he was planning to descend by the corrie path after adding a second hill. Having more years and sense than me, he'd used a bike to ease the long track to the bothy.

A summit cairn offered a good spot to stop, have lunch and consider. The ridge ahead looked interesting without being too demanding, especially important since I wanted to return the same way. It would be possible to descend southwards after heading east, but adding extra distance and effort to what was already going to be a long day. The clouds were drawing in more at this point - some wisps even brushed the 987 metre top while I was further along - and seemed to be dropping rain on a few neighbouring hills as they passed. So I donned my waterproof jacket and gloves in order to be ready should the weather worsen when I was too busy to change things.
The top of Lurg Mhor first narrows, then drops away, around a north-facing corrie that still held a great deal of snow. The descent is a semi-scramble, needing a hand now and then for reassurance or to ease down some of the sloping slabs, but without anything technical. Ascent/descent to reach the ridge

A narrow bealach leads to a series of bumps and rocky ridge sections. I found one of the first most testing, where it offered the choice of a mossy ledge around the north side, or a stepped but steep slab about twice my height. The moss and grass were dry enough, but I opted to clamber up the slab, feeling more comfortable with some solid grippy rock. But either way looked viable and, from discussing the route, I gather that the ledge is the suggested option. Scrambling on the east ridge

The east ridge continues with some easier scrambling until it rises and rounds off to a gradual grassy stretch and the second Top. With the scrambling (and pauses for thought and photos), this section took me about 50 minutes out-and-back, but I'd thoroughly recommend it as an extension to the main Munros. I returned by the same way (including reversing the slab), relieved to find that the clouds were lifting slightly and hadn't dropped a shower during the committed stages.

Returning across Lurg Mhor, I encountered a further walker - the hills were really packed today - a lady nearing her last few Munros. She, too, was more sensible in her approach, having set up a tent near the bothy.
I did try to keep to keep to a path while descending to the bealach, but was soon distracted by clambering down some rocky bits, though nothing that seemed to merit the craggy lines on my 1:50K map. The other side isn't steep, but felt enough effort to justify a few bites of flapjack (my supplies were still holding out) and pause to re-view.

Picking up a path again, this became quite boggy near to the top of Bidean a'Choire Sheasgaich. This peaks in a shapely top, with another ridge to guide the gaze northwards, though there's plenty to see in every direction. I went ahead with descending southwest-wards, crossing the minor top of Sail Riabhach. Some of this stretch has a path (shaped by passing feet rather than made), not that it took me long to improvise my own descent and pick between the few steeper or rougher sections. 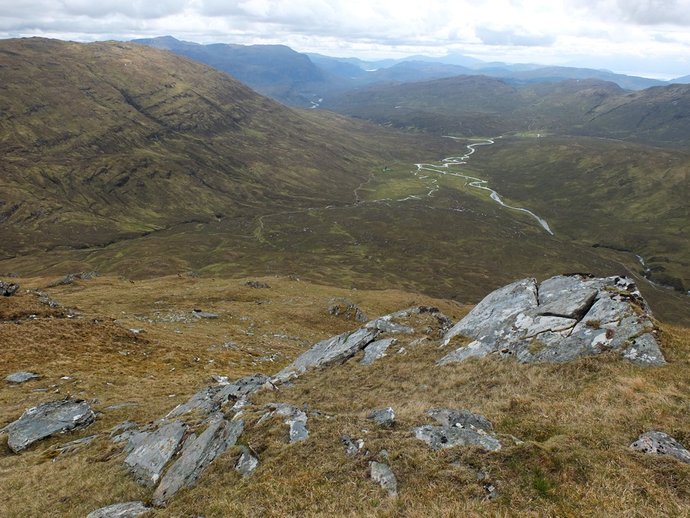 Rejoining the Loch Calavie track, I followed that back across the footbridge and on towards the Lodge and bothy. 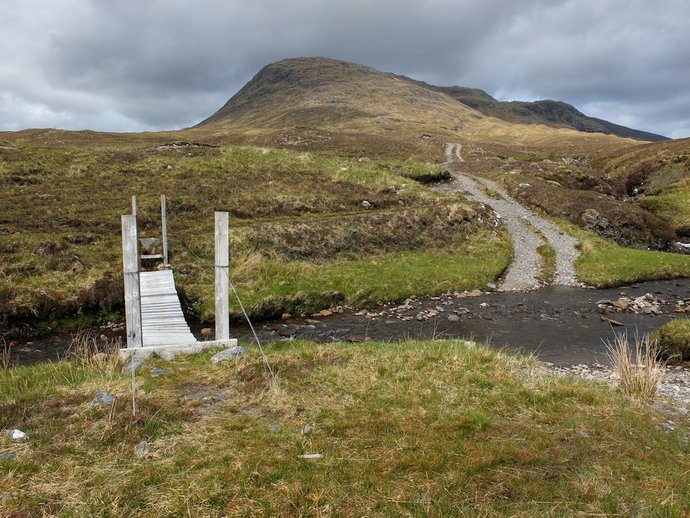 Bridge and the descent

I stopped in at the bothy once more for another snack break before the walk out. There was someone in residence again, though we'd already met once during the day when I arrived at the car-park. We were soon joined by the older walker, also stopping by for a break before his cycle out. I left then to begin my own final stage (by boot, rather than bike).
There was a short spell of light rain along the way, but only long enough to be refreshing, without making this leg of the walk feel interminable. I did resort to one or two short cuts (following the paths made by others before me) where the track swung too extravagantly over the many miles. Zig-zags down to Attadale

I eventually reached my car again, long overtaken by the part-time cyclist, with the gardens (and any chance of a tea room) closed hours ago. But in good time to get back to Kintail for dinner; I had an inexplicable appetite for cheesecake.

Re: Sheasgaich with extra topping

Nice report and timely too - planning on heading up that way soon, so it's useful to have some pics/description of the route in (I did Sheasgaich & Lurg mor from the Loch Monar side previously) but I want meall mor and Ben Dronaig this time, possibly also that awkward Graham out to the SE of Lurg Mor.
Al

Re: Sheasgaich with extra topping

weaselmaster wrote:Nice report and timely too - planning on heading up that way soon, so it's useful to have some pics/description of the route in (I did Sheasgaich & Lurg mor from the Loch Monar side previously) but I want meall mor and Ben Dronaig this time, possibly also that awkward Graham out to the SE of Lurg Mor.
Al

I did peer down that side of Lurg Mhor (as a precaution in case the weather really closed in, or there were difficulties with the scrambling, which turned out to be fairly benign).
Unfortunately that's when the cloud was lowest, so my other photos from that stage don't show much of the terrain towards An Cruachan, though the recent SMC guide does mention that one burn crossing can be trouble in spate (at a guess, that may mean the burns linking Loch Calavie and the other lochs eastwards).

This has the eastern end of Ben Dronaig, with Aonach Buidhe in the background, though I've nothing closer or better of that area.