Yesterday I decided it was time to do Ben Nevis, which I was doing for charity. I'm not a crowd lover, or fond of it getting too hot so it was an early start leaving my house at 2am to get to the visitor centre carpark and starting our walk at 5am - but it paid off as the early start meant that the ascent was in the shade until we reached the plateau, where there was enough of a wind to keep things nice and cool! We only met a handful of people who overtook us on the way up, but partway down we started to meet larger groups and crowds. Would not like to try this on the weekend! The views were amazing and I was so pleased that we got such good views and had the time to enjoy them as well.

There were rumbles of thunder when we were about and hour away from getting back to the visitor centre and the last bit of the descent was uncomfortably hot, but we were back in the car by 1.20pm and on our way before the thunder really kicked off. I'm guessing a lot of people that were just heading up as we were nearly down wouldn't have been so lucky though!

My pal Dottie on the way up, she writes fortnightly newsletters to seriously ill children as a part of the charity Post Pals and it was this we were raising money for. She will soon have a newsletter going out about her Ben Nevis Challenge!:

Amazing views, really lucky to get such nice clear weather:

Fortunately there was one other person at the summit to take this lovely photo of us all together at the top! I was really amazed that we actually had time at the top where we were the only ones there as I really wasn't expecting that at all! If the lady is on WH - thank you so much for taking this photo!

Millie was very happy to see the snow at the top, she tried leaving her own mark at the top but much to her annoyance I picked it up! There were only two small stretches of soft snow to walk across and it was pretty soft.

All in all, it was a great walk that I really enjoyed though I think the early start had a lot to do with that, I doubt I'd have enjoyed it so much starting later in the day when there were a lot of other people going up so it was well worth the early start.

Wow, I can't believe how much the snow has melted! I was only up there last Thursday and none of the buildings other than the shelter were visible! Great photos. Looks like you had a beautiful day for it and a great cause!

Glad to know that The Ben was in good mood for you, especially with such a fantastic cause

And Dottie is a real star!

I did Nevis in 2010 in memoriam of the 96 victims of Smolensk disaster, carried a little Polish flag to the summit. Luckily, I also had a clear day. My chum climbed Nevis 4 times and only saw the views once. Weather up there can be really sulky. 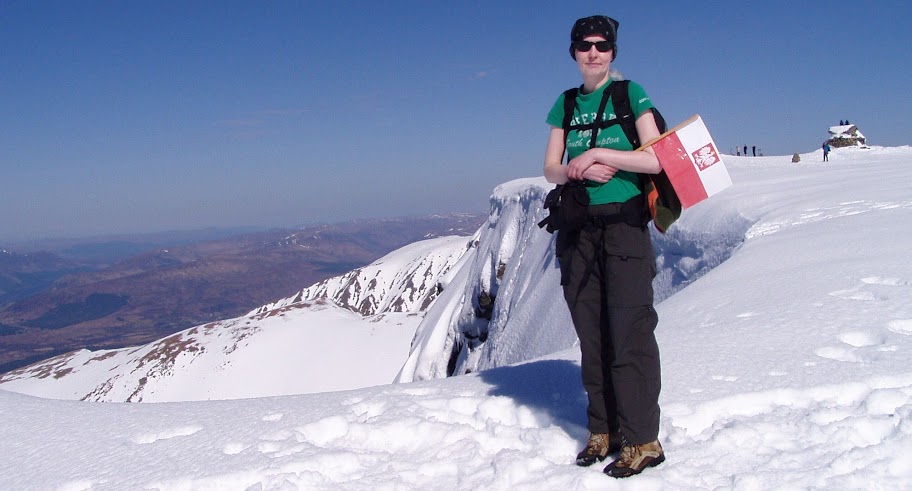 Now it's time for us to visit The Ben again, via the CMD arete

Beam - wow that is quite a difference! The snow had been dug away from the buildings and was only maybe a couple of feet deep when I was up - though judging by the heat yesterday I suspect a lot more melted away yesterday! I did like that there was still snow up there

BP - I was glad that visibility was so good, I really wanted to get photos of Dottie showing the landscape rather than Dottie in a mist/cloud that could be anywhere so I was really lucky especially as it was forecast cloud when I first decided to go for it. It must have been Dottie's luck striking again!

Good luck heading up via the CMD! That way is a bit beyond my ability at the moment LOL

Beam wrote:Wow, I can't believe how much the snow has melted! I was only up there last Thursday and none of the buildings other than the shelter were visible!

As I was looking through these pics I was thinking the same exact thing the difference between the 2 trips in a matter of days is astonishing.

Glad you've stuck about the forum Beam. I hope your nav course goes well and the knees get better!

Early start definitely the way to go to beat the heat and crowds. I found some people's manners sadly lacking, shoving past folk on the path without as much as a grunt in the process. I normally like folk - but Nevis was something else.

dogplodder wrote:Early start definitely the way to go to beat the heat and crowds. I found some people's manners sadly lacking, shoving past folk on the path without as much as a grunt in the process. I normally like folk - but Nevis was something else.

Odd you should say that, I found for the most part the people on Ben Nevis were a lot more pleasant than when I did Ben Lomond! Coming down Ben Nevis there were two guys who basically moved to walk on the side me and the dog were coming down making us have to move to the otherside that I thought was very rude but they were the only ones I found to be lacking manners. Most other people were very friendly and said hello, got a lot of comments on how well behaved Millie was LOL The few people with dogs that we met had dogs with good manners, I was dreading meeting other dogs after several unpleasant encounters when we did Ben Lomond but I was pleasantly surprised to find no issues at all on Ben Nevis. Though maybe I had just timed it right, Ben Lomond I did on Good Friday!