20100619.gpx Open full screen  NB: Walkhighlands is not responsible for the accuracy of gpx files in users posts

So, hadn’t topped a Munro for 6 weeks, hadn’t done any walking for 4 weeks and had being feeling out of sorts for a while so fancied some lonesome wildness. Which meant either opting for somewhere not so popular or walking at a time when most folks are either tucked up or having diner. In the end opted for both of the above and canisp’s excellent Beinn nan Oighreag report persuaded my that a visit to Glen Lyon was overdue.

Didn’t leave home till 1pm for the long 3hr+ drive to Glen Lyon. But it was a lovely day and Glen Lyon was just stunning. Never been up this glen before so was reminded how lucky I was to be living in such a beautiful country.

The plan was to start late and if it looked like a promising sunset stay up high till the sun set at 10:10pm. With over an hour’s twilight after sun down getting down wouldn’t be a problem. Just the long drive home to worry about

So decided to do both Meall Ghaordaidh & Beinn nan Oighreag to bulk out the walk.

Was on my way about 4:45 and was atop a disappointing Beinn nan Oighreag by 6:30. You do get a good view of the true nature of Meall Ghaordaidh from this top but otherwise its an anonymous grassy hump (albeit a big, just 7m short of a Munro hump). And the visibility was superb with nay cloud in the sky – but the few clouds there were were of the lovely lenticular type. Just a shame about the nagging Northerly wind. 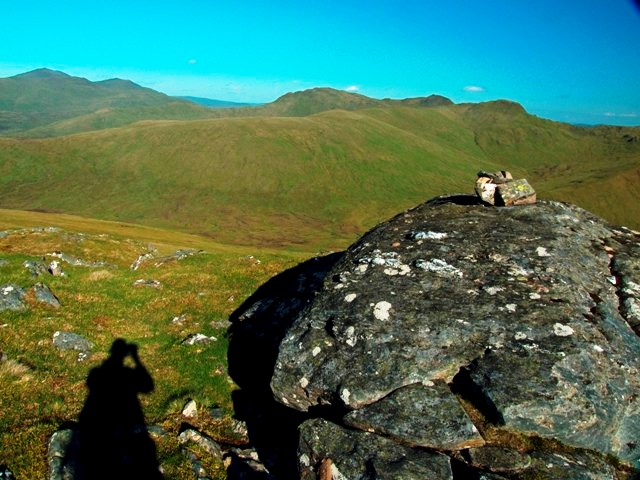 So down the bealach and up and along the western buttress to Creag an Tulabhain (arriving around 7:45). More great views of Glen Lyon. But wind was getting stronger and more annoying, now pushing 40mph. I found the final push up to Meall Ghaordaidh a real struggle as my recent inactivity came home to roost. Despite slogging uphill I needed a third layer (having started in just one). Was very grateful for the large stone shelter around the trig point where I plonked myself for 15 minutes while I recovered and replenished myself. And somewhat miraculously while I did so the wind dropped off almost completely. Was able to marvel at the views all round in peace and even get out with my new tripod for some panoramas.

Still an hour till sunset but I wasn’t too hopeful of a spectacular one as there weren’t enough clouds about. So eventually down the central buttress (Creag Laoghain) and I start to hear voices. At first I thought they were from the valley far below, but no, it turns out to be 3 Glasgow lads camping around 860m up with their tents tucked in the lee of some very large boulders. So stop for a good 10 min chat about the area (not their first visit), the wildlife (lots including a very beepy Golden Plover) and the prospects of some star gazing. Nice lads – even oferred me a brew.

Back down the hillside, past sunset and still lots of light all the way back to the car, arriving at quater to eleven. Almost magical.

Then the slow drive back down the glen avoiding all the sheep, deer, rabbits, hares, hedghogs, etc wondering about the place. The lads back on Meall Ghaordaidh were in for a disappoint star watch however as the sky never got dark. There was a bright half moon out but the only star I saw was the North Star at around 1am. By the time I got home at 2am the sky was starting to brighten again! Atop Meall Ghaordaidh at 9:00 pm Great idea to do both together - looks a good route - I think I'd probably prefer Beinn nan Oighreag ascent from Glen Lochay though, although I've fancied doing Maol Ghaordaidh from Glen Lyon ever since I saw the route from the summit. It really doesn't get dark in Scotland in June does it? I always like that when I go up at that time of year... we were up last week at Durness on the north coast and I'm hating being back home now where it gets dark around 10 still

That photo is bizarre but wonderful. Tweekie would be proud.

oops - I see what you meant, Alastair. I meant 'Twiki'

Lovely set of pics - and an interesting route too

that makes it very tempting to google it now... but I am at work so perhaps not!