Previously came un Stuc, when I tried to do this one towards the end of April, along with fellow WH, Karen. Too much snow at the top. Hopefully this time would be no such worries, though the weather had been generally rubbish. Unfortunately, wasn't able to hook up with Karen this time, due to my usual last minute dash for the hills.
This time I chose to miss out Meall Greigh, instead heading up to the dam, then north up to the bealach of Lairig Innein, the way we had come back down in April. There is a newly fenced off compound here to protect the flora and fauna, but the local deer obviously hadn't read the 'keep oot' signs! Oh deer, can you not read! Ben Lawers looking mighty, from near the dam.

An Stuc and Ben Lawers was looking clear, though there was some cloud sitting on the top of Meall Greigh. The going was not too bad, but gradually I was beginning to feel the pace of fairly constant up and was glad to reach the top of Meall Garbh in two and a quarter hours. Not glad to see An Stuc intermittently covered in clag, however. The clag moves in on An Stuc. An Stuc from the summit of Meall Garbh, with BL & BG behind.

Headed down to the foot of the hill and had some grub, where we had previously tried to spy a safe way up. At least this time I could see the semblance of a path, or so I thought. Path visible till about half way up.

The first couple of hundred feet were reasonably easy, but thereafter track splits up and one has to choose for oneself. Hands on definitely required, with a few white knuckle moments

Very steep looking back down! Would we have made it up here in April? I doubt it and am glad Karen, helped never letting my thoughts get close enough to having a go! Anyway, slow and steady moves soon got the worst over and the gradient eased on the final stretch to the summit, which looked to be all mine, as I took a distant pic of the cairn. Three hours to the top, but just as I moved in to stake my claim, two young lads appeared from the other side, to beat me to it. Drat and double drat! There is some sense of satisfaction being the first to the top of a hill on any given day, to me anyway, even if thousands have been there before. Ah well, no worries and someone to blether to. As summit - just before the lads stole my thunder! Lochan nan Cat from An Stuc. Where's the cat?


The first thing the boys asked was "is this Ben Lawers?" Nope, I said, probably a bit too gleefully, pointing to the true BL, not far to the south, which they thought was Beinn Ghlas. Anyway, introduced them to An Stuc. "Where's Beinn Ghlas then?" I pointed it out too and suggested they must have missed the path up some way back. Aha, I thought, a moral victory, as they didn't know it was AS they had ascended! One up

(And then I remembered the odd navigating faux pas of mine and thought, don't be too smug!

)
I left the boys to have their lunch and made off down the south side of An Stuc, deliberating whether to drop down to Lachan nan Cat, or go up Ben Lawers, then down its east ridge? Although feeling a bit leg weary, after my usual mental dithering, I opted for BL, seeing as last time I was there, I saw nowt! Passed a few others en route to top, which had taken a further 50 mins from AS. 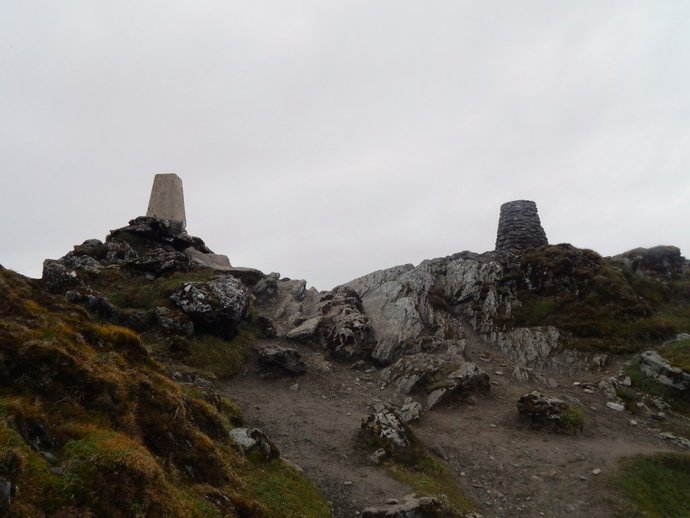 Toward the east ridge of BL. Looking over to Beinn Ghlas. Looking back up An Stuc, with Meall Garbh behind. By now the rain had started so views were still poor, so didn't dilly-dally much and headed off towards the eastern side of the hill, which was quite easy progress other than the occassional stony bits, then a bit squidgy on the flat, crossing the peat bogs and moss, to join up with the outward track, then back down to the hotel, where I grudgingly coughed up another fiver for the privelege of my blue balloon! No payment by custom now, so I happily took my 'need to feed' elsewhere

Five and a half hours in total, should you be considering this route. Three munro's for the price of the one I wanted, but a bargain, all the same. Wet look over to AS from the east ridge of BL. 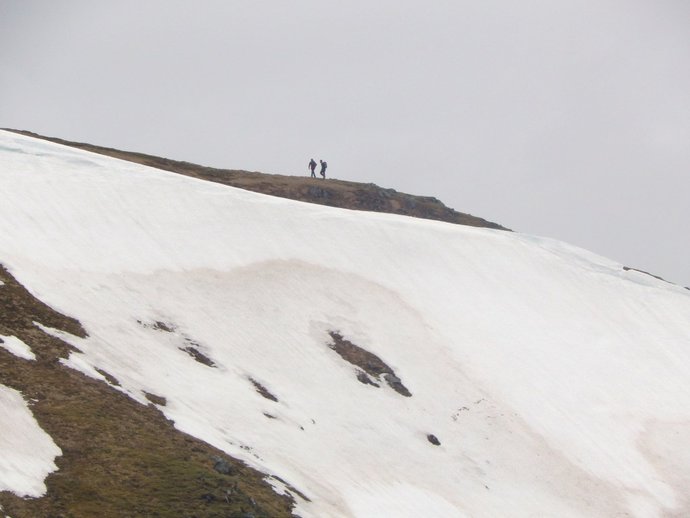 The two lads conquer BL for the second time. Looking over the Meall Greigh. Some cornicing on north ridge of AS.