After the gentle Drumochter Rambles it was time to get a bit more serious. Weather forecasts indicated that Saturday might be a good day, and I'd already done a wee recce of Ben Vorlich after my trip up Ben Chonzie earlier in the year. After the mandatory bacon roll and coffee in Comrie, I was away from the car by 09.15 am. ... and winds round the side of Ardvorlich House. The weather was looking promising ... A convoy of walkers had assembled itself by about half-way up. Ahead of me a couple of Brownlees who'd passed me while I was taking photographs, were making good speed. And ahead of them a couple of lads with a wee dug skitterin' aboot. Then behind me a lone walker who'd stopped to re-fuel on the way up. The path was good and the ascent straight-forward. Final part of the ascent with the Ben Vorlich trig-point just visible.

The summit was gained in about an hour and three quarters and it was nice to arrive directly at the trig-point instead of the usual "and the summit is another kilometer further on". The Ben Vorlich trig-point and lonesome fence-post. Rest of the convoy over at the cairn.

I stopped for a snack whilst the Brownlees, the two lads, and the wee dug skitterin' aboot headed off for Stuc a'Chroin. I was just leaving when the lone walker behind me arrived, so we chatted for a bit, then I too headed off for the Stuc. The path down was straight-forward but steep and I was glad of my poles in parts. Stuc a'Chroin from Ben Vorlich with the prow looking ominous. Looking up at the prow from the base of the boulder field.

Arriving at the base of the boulder field, I was reminded of an old blues which goes "Which-a-way, which-a-way does that blood river ever run". There was no river, but just decisions about whether to go left, go right, or just go straight up. I'd pretty much decided have a crack at straight up, but the two lads with the wee dug skitterin' aboot had decided to go right, which took them on a fairly lengthy detour over to what is effectively the descent path. As for the Brownlees - there was no trace - they had completely vanished. Perhaps they had found a worm-hole.

The boulder-field was straight-forward and I found myself on a wee path heading right. After a bit I paused for a breather and found another walker had arrived at the foot. He seemed to nod in approval at my route so I carried on ... and on ... until I suddenly found myself surrounded on three sides by rock. There was a way out and plenty of hand-holds but I just couldn't reach any of them. The old Whisperin' Ted Lowe line "Too old to get his leg over ... " came to mind which was appropriate as I appeared to be snookered. Fortunately the walker behind arrived and volunteered to have a wee look round the corner. Sure enough the path continued and on we went. There was plenty of scrambling with me on my hands and knees at one point, but eventually we both realized we had it licked and paused again.

"Pity there wasn't a cairn to show you the way" I shouted, looking up at my companion.
"Look behind you" he grinned back. The wee cairn about 2/3rds way up the prow.

And finally we came out on top. The memorial cairn on the summit of the prow.

We shook hands, my companion was off, and I dawdled to take more photos ... The vast bulk of Ben Vorlich from the summit of the prow. The walk over to the summit cairns was pleasant after the vertical exertions of the prow, and I was joined on the right by the two lads with the wee dug still skitterin' aboot. They took one cairn so I took the other and stopped for a spot of lunch. Looking north-west from the summit. This ugly rash of conifers is a reminder that wind-farms are only the latest aberration to befall our native land-scape.

With the cloud-base sinking and growing darker, I did not stay long. I was surprised to find that cairn-to-cairn, Ben Vorlich to Stuc a'Chroin had taken a couple of hours and I knew the way back was also a long slog.

First, you drop down onto the north-west shoulder of the Stuc ... Then into the corrie and on towards the base of Ben Vorlich ... Then round the flank of Ben Vorlich ... At this point you pretty well have to improvise, although there are some marker sticks that suggest the way ahead. I chose to stay high to regain the main Ben Vorlich path as soon as possible, but this proved to be the wrong decision. If you stay low in the valley, you'll re-join the path quicker and lower down. 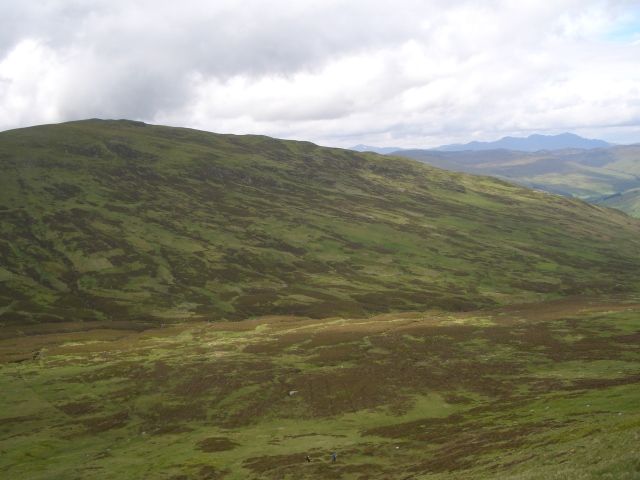 Stay low like two lads with the wee dug, and you'll get to the main path quicker. Finally back on the main path.

Which ever way you choose, you finally get back on the main path. After another 45 minutes or so of knee-crushing descent I was back at the car. Total time for the descent and the walk-out was about two and a quarter hours.

The moral of the tale:-

As far as the prow on Stuc a'Chroin is concerned - surprise, surprise - size matters. The taller you are, the easier it is because all these hand-holds are within your reach. The smaller you are (I'm about 5' 6'') the harder it is and the more scrambling you'll have to do.

Definitely a grand day out, but sadly the views fell victim to the weather.