Went here for a number of reasons, the 1st being we tried to get to HMH earlier in the year with no succces(Due to mis-spent time yapping

) but a goodtime out all the same. The other main reason being lots of water readily available (less weight to carry for all) and My Girl friend and her Daughter wanted to us to take them out to the mountains and possibly up one. Her daughter has already been out with us (Camping out New Years Eve at -5c<). My Bud & Me also have plans for this winter(2010) to try and spend 7 days in the Cairngorms(Correct Gear). So we need to learn the whole area and record our own summer GPS tracks for winter use. We were hoping for better weather conditions so they would see more of the mountains but that was not to happen. Our planned route was on Saturday to go up Glen Derry to HMH have a break, get some food and drinks and Ascend Beinn Mheadhoin, then on Sunday to Acsend Derry Cairngorm and Descend is Carn Crom back to BSMH have a rest and head back to car at Linn of Dee. We set off Saturday morning and just took our time to get to HMH at the Northern end of Glen Derry. The Glen looked so different with all the snow gone and somehow Not so BIG as it did the 1st time. The burns were running a high water line and the 2 burns at the Northern end were a task to cross with loaded rucksacks on our backs. Everyone got over safe and dry and after a little time we reached HMH 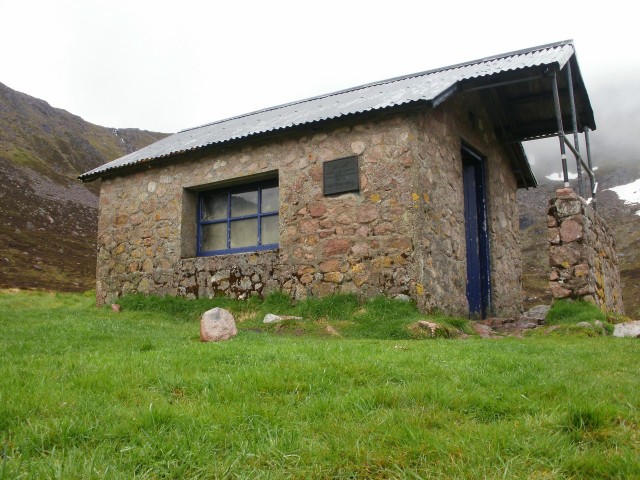 . Like Corrour bothy with Bod an Deamhaim (The Devils Point), HMH has good back drop surroundings that give you a good perspective on the size of the mountains around you. We all ate,drunk and rested till everyone was ready to attempt Beinn Mheadhoin . The burn flowing from Loch Etchachan also had a high water line making crossing it difficult especially for my Girlfriends daughter but all crossed it safe and dry twice. As we were Ascending the upper section of Beinn Mheadhoin low clouds were moving in our direction from Cairn Gorm Reducing visability, we all reached the summit took some photos and a wee break and head down to HMH. On Saturday we Ascended Creagan a Choire Etchachan with Loch Etchachan behind us, and boulders upon boulders all the way over Derry Cairngorm and onto Carn Crom . It took us alot longer than we expected but we reached BSMH had a break then head back to car at Linn of Dee and headed home. 4 Mountains, 2 of them Munros not BAD for my Girlfriend and her Daughter for there 1st time out and carrying loaded rucksacks. Well Done to you both.

Hi Scotshiker! Nice report and it looks like you had some good fun along the way. If I'm reading this right, you spent the Friday night at Bob Scott's before heading up to Loch Etchechan and onto Beinn Mheadhoin. Was there then an overnight camp somewhere up there before heading out on the Sunday over DC? I'm going to be heading from the Ski carpark on Cairn Gorm to Linn of Dee on Wed/Thurs next week via a quite tortuous route I think (assessing part of a Gold expedition) and will probably end up camping somewhere around the loch or on DC.

We were meant to be camping out but ended up sleeping in HMH on the Saturday night and yes then heading over DC on the Sunday.

Cheers! Yeah, I thought you might have ended up kipping in there. I'd thought about it for next week depending on the weather and whether I can be bothered carrying a tent, but from my last visit to the hut, it didn't look like the ideal place to kip down.

Nice saddle bags on the mutt

The dog was'nt ours, i just took a few shots as thought it was great seeing the dog carrying its own food etc.