bstarav5 27 6 15.gpx Open full screen  NB: Walkhighlands is not responsible for the accuracy of gpx files in users posts

Friday 26 June was the last day of my first week of two staying in Glencoe. The weather started off not so well, but was forecast to improve later on. So I nipped into Fort William in the morning, planning on walking later, maybe the Stob Coir' an Albannaich 2 from Glen Etive. Back in Glencoe, it was still pretty wet and grey, and I wasn't rushing to get ready for the hills. I'd been up Bidean nam Bian the day before, and walked five days out of six, and a thought occured. The Ben Starav 3 was also on the agenda, and if I had a rest day, Saturday, with a more promising forecast, might give me the chance to go for all 5. I'd never done over 2500 metres of ascent in a day before, but the route did have good bailout options if things were not going well. So I gave the hills a rest for the rest of that Friday, and my B and B hostess offered to do me an early breakfast next day.

Saturday morning came, and I set off for Glen Etive. Driving down the Glen, I could see Ben Starav was in the clouds. I found a place to park, and set off to cross the River Etive. Ben Starav from the River Etive 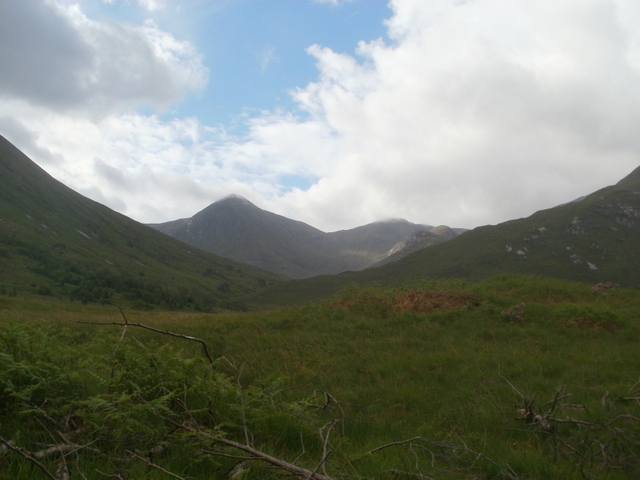 I got onto Starav's NE ridge and began to go up. 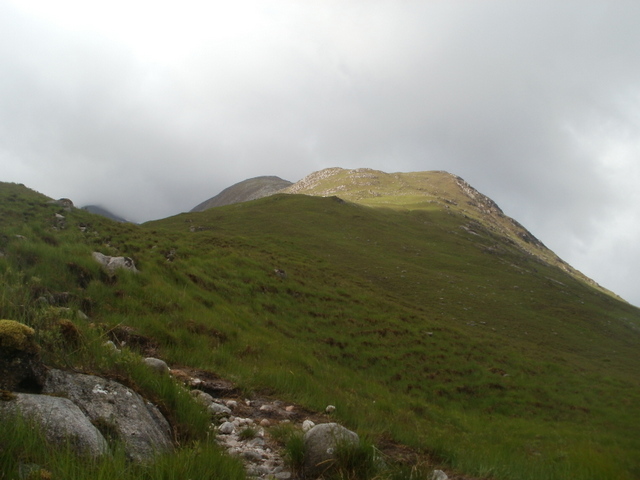 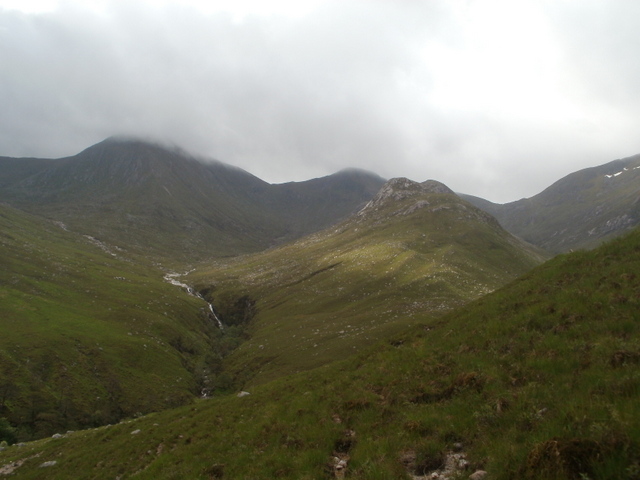 A shower came along, and I moved into the clag. The rain didn't amount to much, although the cloud didn't lift. But there were still some impressive close-up sights as I climbed higher on the ridge. 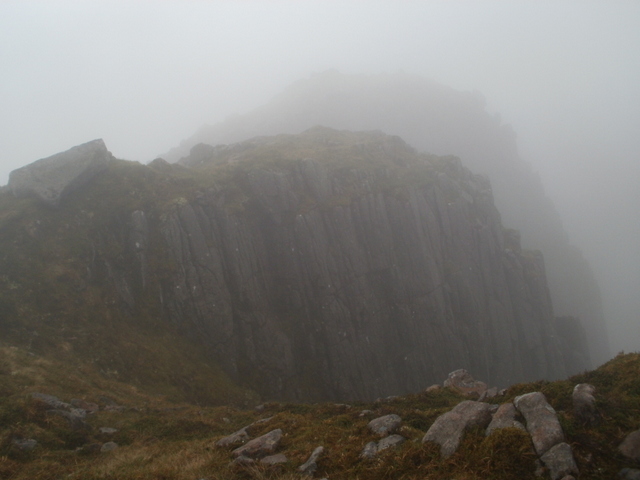 Cliffs above Coire an Fhir Leith

On top of Ben Starav, I met a group of Scotsmen who'd started the walk ahead of me. There was no distant view for any of us up there. They continued with their summit rest, while I moved off towards the SE subsidiary top. Carrying on NE from there took me onto a nice little ridge. 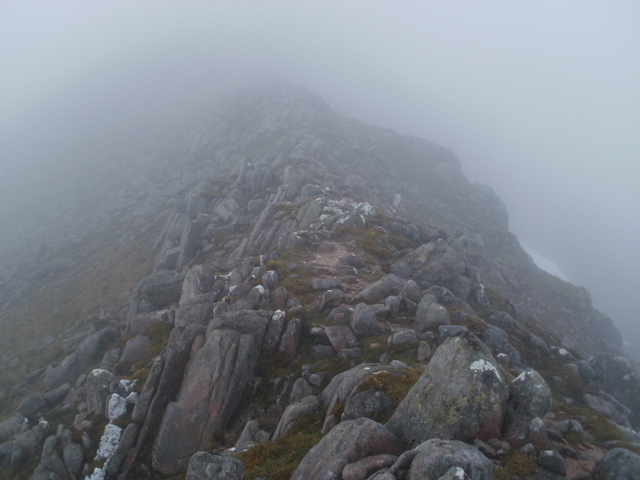 On the ridge between Ben Starav and Stob Coire Dheirg 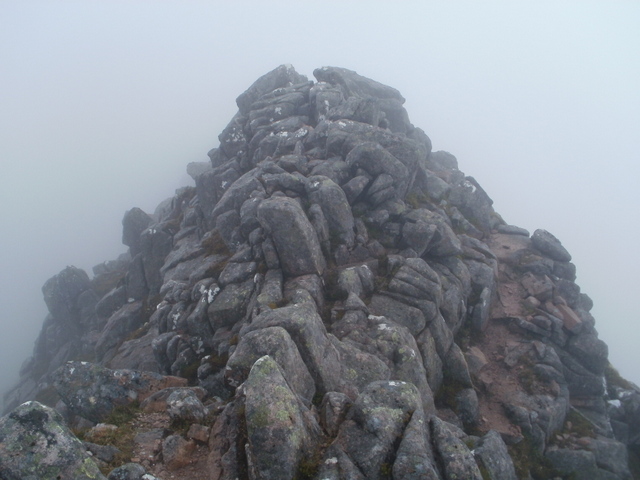 I didn't go quite all the way to Stob Coire Dheirg; instead I descended from the ridge slightly on a clear path SE which seemed to be on the right bearing. The path fizzled out, and in the mist careful navigation was needed to aim for the bealach I needed to reach. I dropped out of the clag, and could see a faint track traversing the flank of the ridge to my target, Bealachan Lochain Ghaineamhaich. Upon reaching this, I found the path heading for Beinn nan Aighenan. Adding this second Munro was more than just a short spur on the route. It was quite a long way out, and felt like a complete ascent in itself. As I climbed, I began to feel I should be content with a 3 Munro round. There were views nearly all the way up, although the summit itself was in cloud. But on reaching the cairn, spirits were lifted. I retraced my footsteps, now downhill of course, feeling a second wind come on, as the views reappeared. 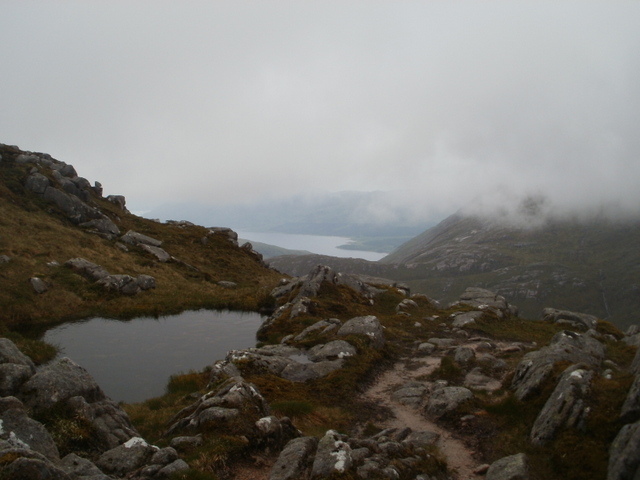 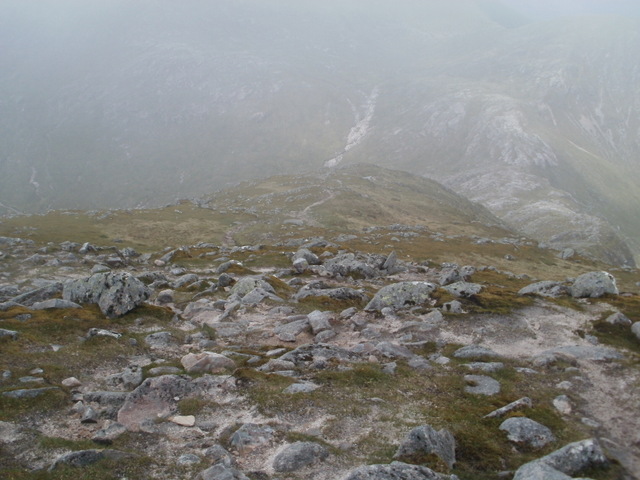 On the way down, I once again encountered the walkers I'd met on Ben Starav. They told me they'd also like to go for the 5 Munros, but that was the last meeting I had with them. In time I made it back to the bealach. 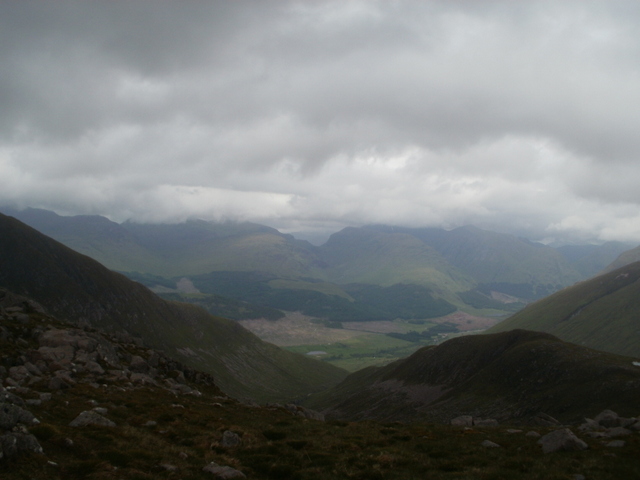 Then it was a right turn, up over Meall nan Tighearnan, and on towards Glas Bheinn Mhor. The walking was easy on this section of the ridge, and the uphill sections not too tiring. 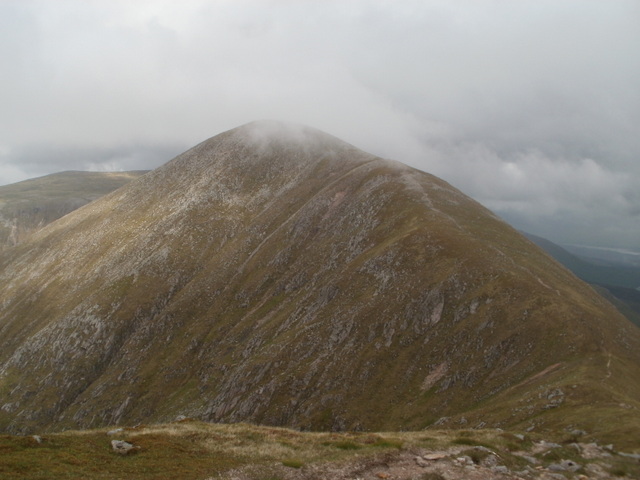 The clouds were lifting off the hills ahead, which also helped to maintain enthusiasm. I got onto Glas Bheinn Mhor and had views. 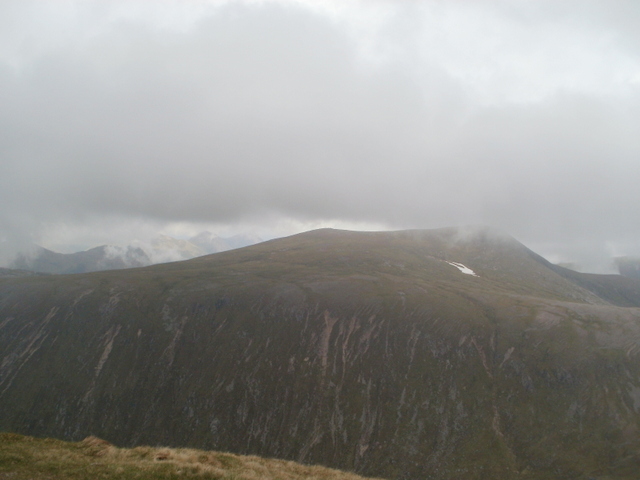 Soon it would be decision time. The next bealach would be the one at which I would turn left into Coire Odhar and back down to the car, or carry on ahead to Stob Coir' an Albannaich. The route up that Munro looked steep on the map, but I could see a path zigzagging up the flank which didn't appear bad. So I moved down along Glas Bheinn Mhor's east ridge, I looked at my watch and I felt OK. The thought hit me, "Yes, I can do it!" The bealach was crossed, and as I'd believed, the ascent onto the peak of the Scotsman's corrie wasn't too difficult. This mountain had appeared expansive and grassy from the west, but on closer acquaintance, it really was quite spectacular, with a steep, rocky, NE corrie. Then it was east along the ridge again. A small cairn indicated the turn left downhill for a safe passage to the bealach with Meall Tarsuinn. This top was climbed next, with an impressive view, looking back, of the mountain I'd just been on. 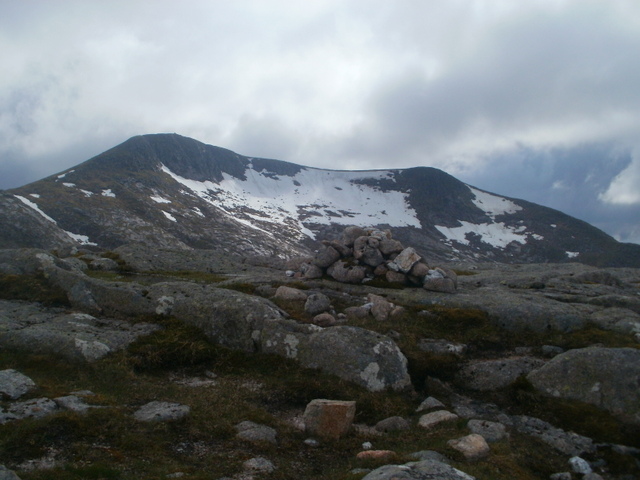 I carried on east to another bealach, and then came the grassy trudge, marshy in places, up to the last Munro. Meall nan Eun's summit cairn came into sight, and my mind switched on for that final summit dash. But by now, my legs wouldn't go up a gear. Energy was at last flagging, so I plodded steadily to the cairn, where I stopped a while with great views to enjoy. 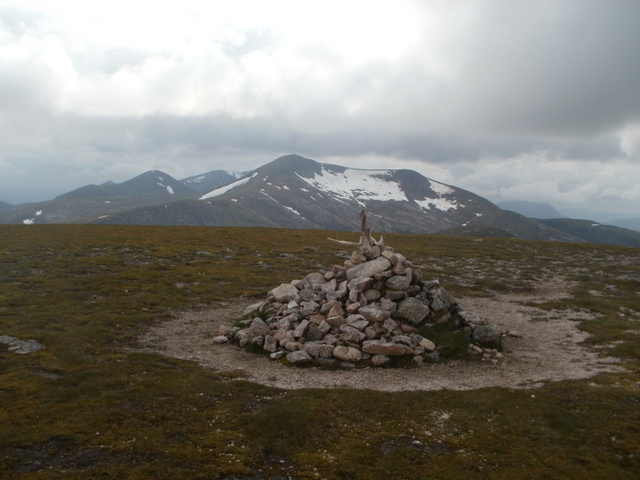 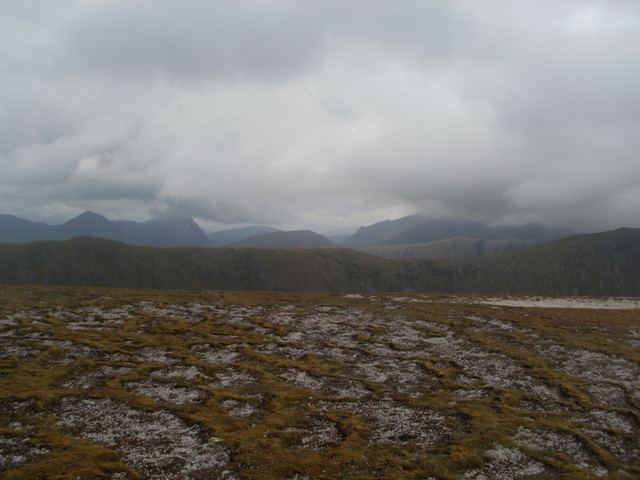 Downhill all the way now, so I set off NW feeling somewhat revitalised. I knew I needed to maintain concentration, as I was on easy ground, but the map showed there was a steep section of descent ahead. I reached the steep part, which was grassy, wet and slippery, with a scattering of slimy rocks. 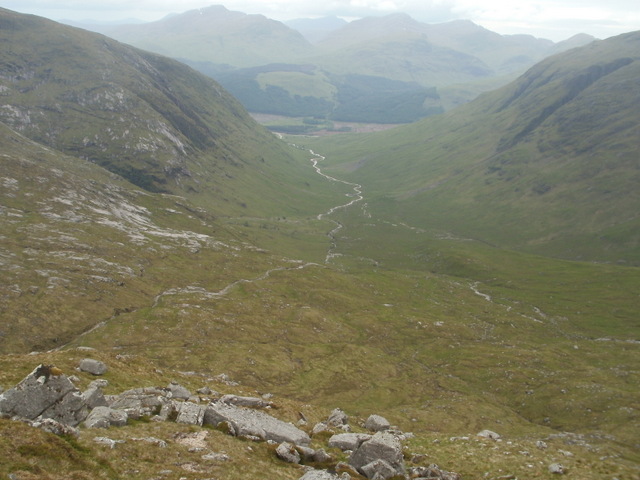 With care, I threaded my way down, but this was not the most pleasant part of the walk. For once, it was going to be a relief to get down onto a more level bog-trot. At last, I made it down to Glen Ceitlin in one piece. 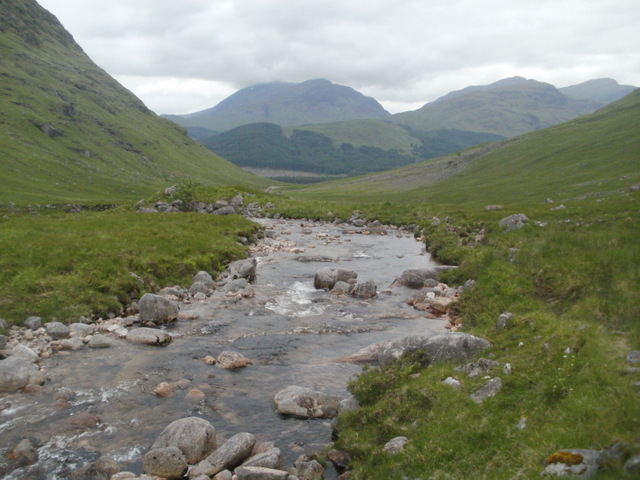 Reaching the lower end of this glen, I could see Ben Starav hadn't cleared. 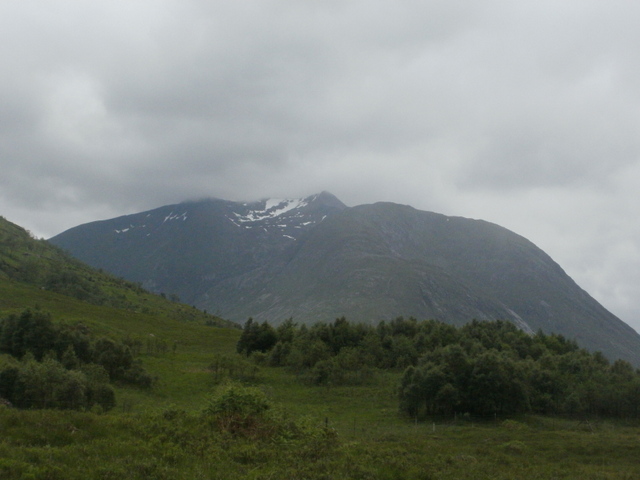 Getting near the finish, Ben Starav still in cloud

And so I made it back to the track along Glen Etive, and finally back to the car. The cars of the Scottish walkers I had met had already gone, so I'm not sure what they had done after Bein nan Aighenan. I drove back to Glencoe. A few days earlier I'd done Aonach Eagach and The Pap wth Cat (Marcol), her first hill walk for a while, and she'd admitted to finding it tiring. So I texted her, saying, "My turn to be knackered now...just done the Beinn Starav 5..." She replied with, "Aw man!" and didn't join me for any more walks on this Highland trip. The weather forecasts were to blame, so she said, but perhaps she was questioning my sanity.

Great report Simon, I've been humming and haying at attempting the five, as you say there is a get out clause after three so will probably go for it, just need to find the time now

Good report on a great trip. Did a similar trip early April missing out on Ben Starav as I'd been on it before

Those look great hills, even on a mixed day. I must be of questionable sanity too, since they look like a fine round, especially with the option to add Meall Cruidh and get my fix of Tops

.
I've not yet managed any of the hills in this area (was there for a couple of days last month during the wet start to June), but this is firmly on my (rather long) list of routes to do.

That's a big round - well done! It was two separate rounds for me when I did these many moons ago. Enjoyed your report.

Nice report and pics. Brought back some good memories. Glad you got some reasonable weather in spite of the less than auspicious appearances at the start. I really think these are cracking hills.
I was also up there a couple of weeks ago (going clockwise), but managed to missed Ben Aighenan due to some s*** planning and some kind of visual blank (didn't even notice it

I did the same walk last Friday - and have a near identical set of photos, except it was sunnier - I got sunburn

I was pretty done in the next day, but it's definitely a very doable round.
The toughest bit was Ben nan Aighenan - I had second thoughts at the top of that, but felt OK again once back on the main ridge....

Fantastic, looks you had a cracking day! That's a big round a good amount of ascent.

I've still got these to do, hopefully within the next month or so. I'm undecided whether I should go for the full 5 or a 3+2 ... but as you said, I suppose the final decision can be made on the day.

Well done Simon, that really was a monster walk

As you said, the walk out to the 2nd summit after Starav looks easy but is much further away than it looks or seems

As for the final descent, I didn't enjoy coming down that slope either

Catch up with you next time you head north

Beaner, Driftwood and SecretSquirrel, I hope you all go for it.

dav, nothing wrong with 2 separate rounds. I was hoping to do the W. Black Mount 4 in a day the same week, but conditions and circumstances meant I did them as 2 pairs.

kaye, I agree with you, it's that detour to BnA that makes it a tough round. But once the initial slogs up Starav an Aighenan are behind you, the remaining ascents are not so bad, but...

...Alteknacker, you skip over these Munros so quickly that missing one is like overlooking a Birkett on the Fellbarrow range.

Cheers Martin. You definitely will be catching up with me when that knee's fully recovered.

This is a great round, well done! I do like the misty pictures especially of the cliffs and the ridge between Starav and Stob Coire Dheirg. They look very ominous this way.

jamesb63 wrote:
I am going to give this route a go tomorrow forecast good for a change

I hope you went for it and had a good day.

Silverhill wrote:I do like the misty pictures especially of the cliffs and the ridge between Starav and Stob Coire Dheirg. They look very ominous this way.

,the walk out at the end is a nightmare
I will do a report soon ,rest first the weather was kind also rather cool to be honest