Sunday was setting out to be a very different kind of day from Saturday - not always sunny at first, but dry and calm and fairly warm. I retraced my steps back down the hill to Seatoller and along past Borrowdale hostel to Seathwaite by the paths, slightly too early for the tearoom to be open for sandwiches - so I needn't have worried about not getting an earlier start!

The main plan was to head up onto the central ridge from Watendlath and head north, but I thought I could fit in Grange Fell on the way, which would make things easier the next time, so I headed up the road to the path a bit before the Bowder Stone, to do King's How first.

I found it a deceptively tricky start - not very far, but a bit steep for the start of the day, and bracken to avoid, and whenever I took my fleece off the sun went in and whenever I put it on the sun came out... 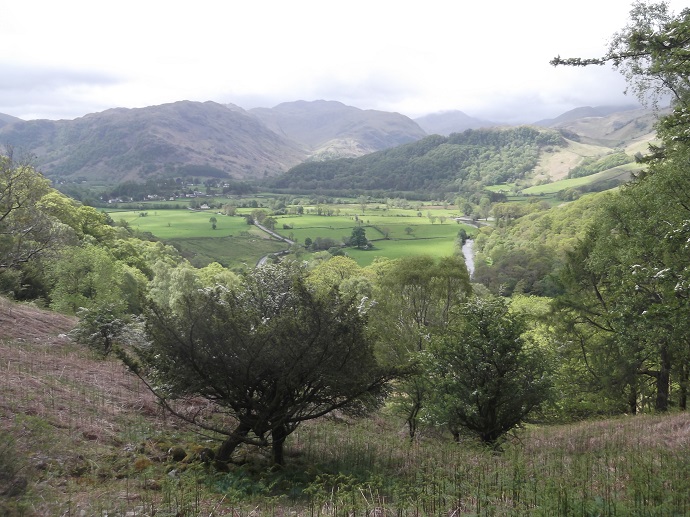 Borrowdale from the way up

Once up into the woods and on one definite path it was easier, and up by the wall there were bluebells, and a very ingenious tree which had fallen over but whose branches had decided that they might as well be trees themselves since they were pointing up now. I somehow missed the direct route up King's How and ended up coming at it from the side, a steep climb from beside the fence - a nice little heathery summit with a good view of Derwent Water. King's How summit and Derwent water

Coming down the same way I had a good view of the path to Brund Fell, which headed over the wall and past a slightly confusing junction where although the path was heading uphill it was really going down, and I had to turn back on myself to get on the right summit path - fortunately the book had warned me. I tried two different summits for Brund Fell and settled on the second one - they were doing the trick of each looking higher from the other, but the second seemed to just edge it, as well as looking more like the illustration. Then a fairly direct route down to Watendlath, with a pause to change into shorts as a) it was warm and b) if I was going to get all wet and muddy, I might as well do it in bare legs and not make a mess of my trousers. I had said that I was only going to stop at Watendlath if it was before 1, but although it was about quarter past I couldn't resist, and had a cup of tea under a tree. Refreshed, I headed up the way I'd come down the day before, and then more or less straight ahead onto to the gentler slope up to the summit of High Tove. It was quite featureless, but easy enough and dry enough, and after a while I could see the summits of the Helvellyn range over the top of the ridge. The summit had quite a nice cairn on it, as well as the fence, and I meant to sit down and eat my lunch there, only I got distracted. I'd come up prepared to be good and follow the fence along to the supposedly drier route to Armboth Fell, but there was a clear beeline path leading between the two summits, and it was just too tempting - that was why I had shorts on, after all, and if other people could go there I could too. And again, it wasn't nearly as bad as I expected - there were a few slightly splashy places, but very few where you had to pick your way carefully rather than walking.

The first summit I came to, on top of a nice rock, looked definitely the highest, but I was pretty sure it wasn't Wainwright's, so headed over to the other, with a tiny cairn on grass. This time the first summit still looked higher from the second one, which I thought was fairly conclusive. From the second summit I could see that I was maligning Wainwright slightly, as the advertised bog was now in the dip between that summit and High Tove. Back at the first summit I remembered to eat my lunch and considered another tempting beeline towards High Seat, but decided that heading back to the fence and the main path was probably better. From High Tove on I was punished thoroughly for all my contemptuous thoughts about the level of wetness, as the path vanished after the fence corner into a sea of bog after bog.

For the first few bits it was possible to pick a way across, but it soon got worse, and after a while I ended up sitting despairingly on a rock feeling as if my shoes were full of soup. I had my sandals that are like jelly shoes with me for evening messing around and decided it was worth a try, but although they might have been slightly better in the wet they just got hauled off my feet in sticky mud. So I ended up walking in bare feet basically by accident, only to find out that it was far better - with shoes on anything that goes over the top of them feels worrying, but with bare legs it's quite comfortable as long as there's solid ground a foot or so down, and you can just go straight forward through more or less anything, instead of having to pick out a way - I ended up walking through more bog than I needed to, just because I liked the feel!

Finally out of the bog I got dried off a bit on the grass and my shoes back on, and headed on up towards the summit, which was over a stile and then loomed above in the shape of a lopsided trig point on a rocky place. Starting to head over to Bleaberry Fell I discovered a disaster - I'd tied my sandals to my bag as they were a bit muddy to go inside, and now found they'd fallen off. I recovered them from around the stile, but that and the endless mud between them had used up most of my spare time

The path to Bleaberry Fell was a round about and in and out type that reminded me of High Rigg, with good views to the two higher ranges on either side and improving views to the north - one of the things I like about the central area is the sheer variety surrounding it, so that you're tucked among hills in the south in the morning, and looking over lakes to the north in the afternoon. Bleaberry Fell summit was a flat place with a shelter and good views to the north as the ground ahead just dropped away. Blencathra and the Pennines

The path down was quite steep at first, and then very obviously turned into a good broad path over the flatter ground below - a bit conspicuous, but good walking. Walla Crag is not at all obvious from above, although it probably is from below. The good path was being mended - or possibly built - and eventually ran out in a mess of mud and a big yellow digger - there was a much more normal path after that on towards the wall. Over the wall was quite a different place - green grass and heather and trees, and a lovely flat summit which would have been a wonderful place to sit and dream. Sadly I didn't have time for that, and hurried down the road to get the bus to Penrith, make a fairly useless attempt to clean my legs in the station toilets, and then finally get my rest in the sunshine outside the Agricultural Hotel before getting the train home. There are an awful lot of other things happening this summer, so it'll be late August before I'm back - but hopefully to finish off the Central Fells ready for big adventures in the south...


HighTove.gpx Open full screen  NB: Walkhighlands is not responsible for the accuracy of gpx files in users posts

A fine day 2 Nigheanddon, the splashing about barefoot in the bog had me envious but wondering if there was going to be a cut foot before the end...glad it was just lost and re-found sandals instead.

The ingenious tree really reminds me of the giant redwoods in California which do that when they fall, sometimes there is a line of 10 or more trees coming from the one fallen one.

Late august will be here before you know it

I was a little bit worried about that, but put my feet down carefully! And I did like the tree - I've seen fallen trees with branches at odd angles before, but I don't remember one going so straight up.

It will, I expect, but the summer seems to be rushing away already, so I'm in no hurry...

Not sure if I'm in a hurry to try your barefoot bog trotting technique.

Judging by your description of other areas I think you caught these fells at a dry time, just as well really.

It was good fun, like squidging your toes in wet sand as a kid! Plus I'm childish enough to enjoy the feeling of doing something I shouldn't be

I was definitely punished for all my doubts!
Most of it really wasn't what I would have called wet, though - it wasn't bone dry, but you could walk over it by putting one foot in front of the other, instead of by dodging round mud and lying water. But I'm not in any great hurry to go back and test it again - although I'd redo the bit from High Seat north quite happily.

and a great place to walk, albeit it's better with boots on

. And I agree that the approach to King's How from the car park is confusing

Hi nigh
it certainly looked greener when I was there 3 weeks later. It's not a bad walk, but like masher says, it seems to have boggy bits even after dry conditions

In an incredible new development there is now a beautiful made path over the worst of the quagmire!