Return to Corrour for 2 more

Return to Corrour for 2 more


The second Monday of my stay in Glencoe, and I'd been hoping to do something in the West Black Mount. But the forecast looked better a bit further east, and I'd enjoyed the trip on the train in May to do Beinn na Lap. So I decided on a return to Corrour to get the other two Munros there. Although Glencoe is nearer to Fort William Station, overall logistics favoured catching the train at Bridge of Orchy. This also meant experiencing a section of the West Highland Railway I hadn't travelled on before.

When I parked at Bridge of Orchy Station, the weather was wet and the clouds were low; a good day not to bother with the Black Mount. I got on the train, and as it headed north, I could see Schiehallion's head was only just in the clouds - things were looking better further east. The train reached Corrour, where the clouds were still quite low and conditions damp, but considerably more pleasant than at Bridge of Orchy.

sgor-gaibhre.gpx Open full screen  NB: Walkhighlands is not responsible for the accuracy of gpx files in users posts

I was walking at 11:20, so there was time, hopefully, to get finished to catch the 18:25, with the safety net of a later train. Soon I was passing the hostel. The construction work going on around here took away some of the feeling of being in the middle of nowhere, but the wild country character was still there once onto the hills. The track took me to Peter's Rock, where I left it and headed uphill. On Meall na Leitire Duibhe I entered drizzly clag, and on the undefined ridge with an indistinct path, careful navigation was needed. But there was no mistaking the summit of Carn Dearg when I reached it. The clouds cleared very slightly, but not for long. 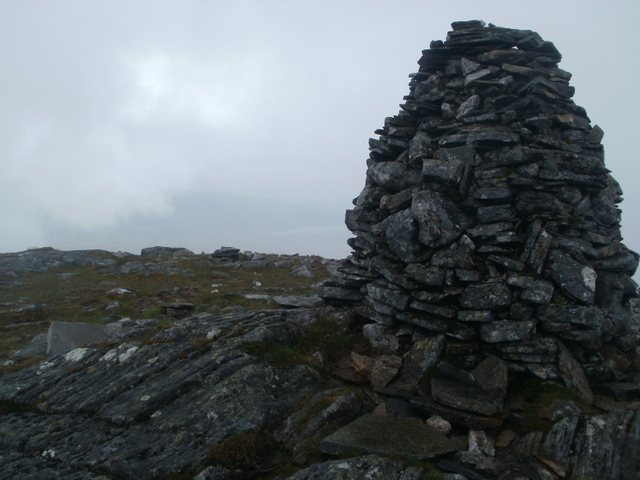 Leaving the summit was quite confusing in the mist, with a path that looked like the obvious continuation of the route not heading in the direction my compass was telling me. The compass was correct, of course, and a break in the clouds revealed the ridge I wanted. On the way down to the bealach, conditions became clearer, and I encountered a couple from Glasgow, doing the same circuit the other way round. They too were hoping to catch the 18: 25. Apparently they met Beaner001 from the forum on Carn Dearg, so he must have been there shortly after me. An easy ascent on a grassy path led up to Sgor Gaibhre, and the summit was, by now, completely free of mist. Next, I descended from the summit northwards. After a bealach, there was a short, fairly steep pull up onto Sgor Choinnich Past the Meall Nathrachs, there was quite a steep descent on a rough, grassy flank, and then a crossing of some marshy ground to reach the track near the shooting lodge. Soon I was back at Loch Ossian. Then, it was a pleasant walk on an easy track alongside the loch. Walking back alongside Loch Ossian I reached the section of track leading from the hostel to the station, and saw the Glaswegian couple a short distance in front. We arrived at the station with about 45 minutes to spare - we all agreed that's better than being late at Corrour! Not a bad place to sit around for 3/4 of an hour and have a chat with two fellow hillwalkers, anyway.