Beinn an t-Sidhein - one of these disastrous days!

Beinn an t-Sidhein - one of these disastrous days!

Sub 2000' hills included on this walk: Beinn an t-Sidhein


I hadn't been out for some months so I was looking forward to a day on the hills. However, things started badly when I stopped for a quick rest from driving and a cuppa on the shores of Loch Lubnaig to discover that I'd left all my maps at home. This put me in a bit of a mood but I remembered reading about a 'blue route' up Beinn ant-Sidhein from Strathyre that I could manage without OS assistance. Not what I wanted to do but at least it was something. I parked in Strathyre and walked for a short distance north up the road to cross the river on the left on a minor road to the school. Just at the bend was the blue marker showing a path up through the woods. I continued to follow these posts until I was out on the open hillside looking down on Loch Lubnaig. Looking down on Loch Lubnaig from the ascent of An Sidhean

The first target was the summit of An Sidhean - a rocky little knoll. There was still a path, this time marked by red/white tape on poles, which led pretty straightforwardly through the bracken and heather, becoming more distinct nearer the top. 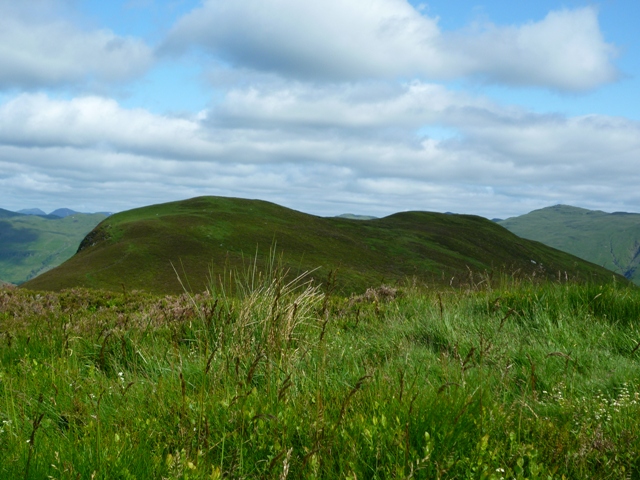 From this top, there was a drop to a fence, with a style, and a track led over an intermediate top to the summit with an impressive (NOT) cairn. On the summit (with the cairn?) looking over to the Graham, Creag Mhor

I just followed my route of ascent on the way down, popping up on to the rocky knoll again where there was an excellent flat-rock 'seat' for some tea and grub. Walking back over to An Sidhean

The day, though, wasn't finished with me. It was very midge back at the car and in the rush to get away, I left my two Leki walking poles behind in the car park. Ah well ... one man's loss ....

I can understand anyone leaving their poles escaping from a sustained midge attack.

Marker poles can be a great help. We were trying to get our heads round the convoluted directions as to how to get to North and South Lee on North Uist, when we saw a note that said that since 2014 marker poles had been in place. Hooray, no falling up to our waists in blanket bog (someone had pointed out this was a hazard), no going the wrong way round the many lochans and getting stuck. Just follow the yellow brick road . Shame about YOUR poles

After all the years and all the hills, I felt like an absolute amateur - forgetting maps and losing poles. I'll just have to get back out again and forget about it!