Enjoying a meall after the rain passed Ryvoan

Enjoying a meall after the rain passed Ryvoan


This started out as aiming for Ryvoan Bothy to spend a night out of the rain. Due to the weather, I'd arranged to be in Aberdeen for lunch on the next day and spent much of Saturday morning and afternoon in drizzly conditions between Kingussie and Aviemore.

The rain grew worse as I headed into Glen More, requiring full waterproof gear for the walk in. The track is very easy going, solidly-made and gentle in gradient. Pines beside the path offer some shelter, but I carried on past An Lochan Uaine (whose green was more of a dark grey in the low cloud and steady downpour). Taking a left fork in the path (I seem to remember that there was a sign for Nethy Bridge), I was relieved to reach Ryvoan after about 2 miles from the car.

There were several tents outside - and group of people sheltering within. They turned out to be a D of E group on a three-day expedition, so the youngsters would be spending the night in their tents. The assessors and I would enjoy the comfort of the bothy, far preferable to pitching in the damp outside even once the rain had settled down.

I stretched my legs later in the evening, long after the rain but with lingering cloud. There's a small lochan just to the north-east, with boggy ground and cottongrass beside the well-drained track. I've no earlier photos of Ryvoan owing to the downpour previously. 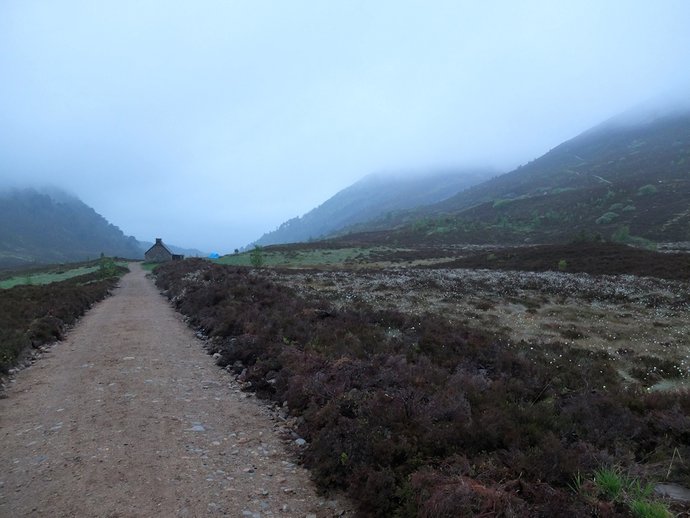 Ryvoan after the rain

I enjoyed a warm night's rest, then early breakfast and checked how the morning looked. The cloud level was around 650 metres and conditions felt dry, likely to improve. As I was already up, it made sense to pack and make an early start (off before 8 AM) to traverse Meall a'Bhuchaille on my way back to the car. Conditions continued to get better; if I'd had the whole day, it would have been very tempting to turn around and aim for a Munro or two. I made a fair pace uphill, despite my larger pack and overnight gear, assisted by a well-constructed path that eases the steeper stretch. That path becomes more worn over a gradual east shoulder, but it didn't take long to reach the substantial summit cairn with low walls offering some shelter. This was still within the cloud, but a mix of experience and optimism made me settle down to wait. Settling to wait out the weather

Gaps started to appear as the cloud was moved and broken up by sunshine and a good drying breeze. This is 15 minutes later: The morning was improving, but I couldn't wait too long. Rather than settle for another 20 minutes, I decided to head a little way along the ridge, with the next Top looking good in a mottled mix of sunlight and shade. 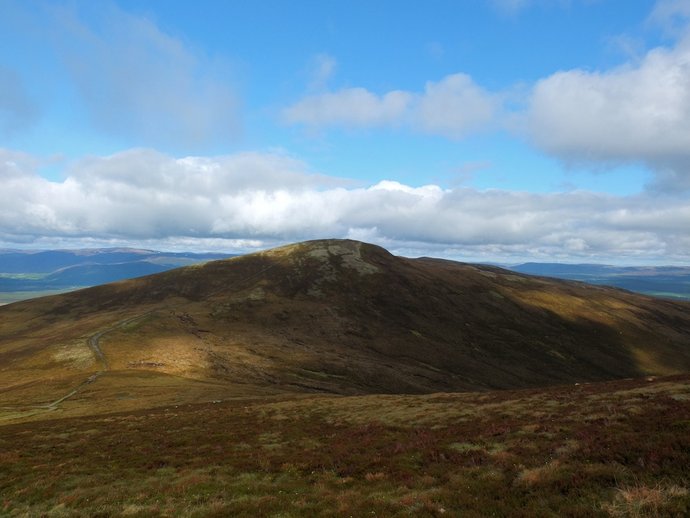 There's a brief boggy stretch in the bealach between these hills, but most of the path is fair or good going, so the ascent added scarcely 15 minutes. Creagan Gorm has a substantial conical cairn and, in the beautiful morning sunshine, proved a superb viewpoint with the Cairngorms on one side and open vistas in other directions. Not wanting to miss lunch, I tried a quick descent southwards rather than retracing the path to the bealach. The open heathery ground was easy to cross, especially once I found the traces of tracks leading in my direction. 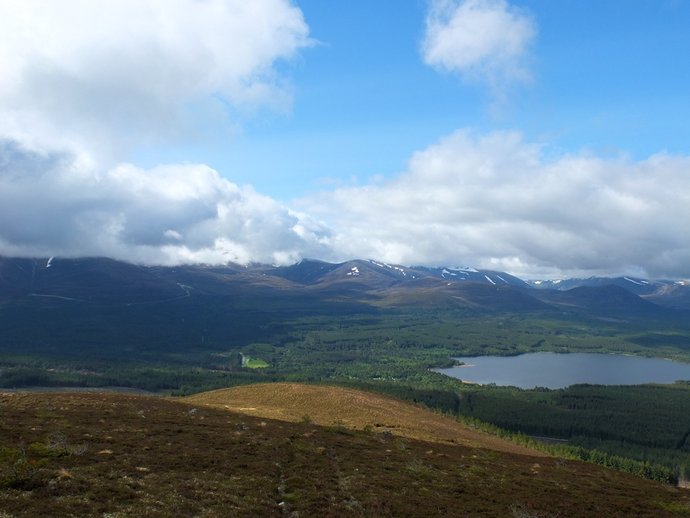 These brought me to the forest edge. I did need to get around a few fallen trees, but otherwise followed tracks and rides down until a wider track, after a felled section, brought me to the main path. This led down to the road, where turning left past the reindeer centre found a forest footpath that accompanied the road/track to Glenmore Lodge. Time taken doesn't include about 12 hours spent at Ryvoan.