White Mounth 20150710.gpx Open full screen  NB: Walkhighlands is not responsible for the accuracy of gpx files in users posts

Kinda knew this was going to be an epic

Decided to book a B&B in Ballater, so that I could get an early start the next day. That is early for me

Had a fabulous Indian and a couple of beers the evening before, not really me, but I was on my holidays. Felt a bit groggy the next morning when I got to the car park for the start of this trek.

Crossed the bridge and plodded off towards the enchanting forest and then up the well trodden path. As I say I was recovering a bit for the beers and think I also caught a cold so this was trudging to some extent. Looking at my GPX on Google Earth it's actually a fair way to get to what I would say is the start of the very interesting bits. Then Meikle Pap and Cuidhe Crom came into view and more particularly the realisation that I would be walking up between there and along there and it did look good. A bit more inspired my pace quickened and I quickly caught up with the lovely Canadian couple who had passed me in the forest. I walked with them for a while chatting about this and that The path up to the Cuidhe Crom plateau was quite amusing and verging on a scramble in places, views were really starting to take shape Got to the top and the Yorkshire man who had passed us earlier was sitting at the cairn having a bite to eat. The Canadians joined him while I quickly walked out to the actual summit of Cuidhe Crom, I was a bit confused as to whether this was one of the Munros I should be ticking off

At any rate it was more interesting than it had first appeared, with a mini Torr behind what could be seen from the beaten track.
I didn't hang around and traversed over to join the track, taking in a look at what I assumed would be an assent up from the Loch

I wasn't going to get too close 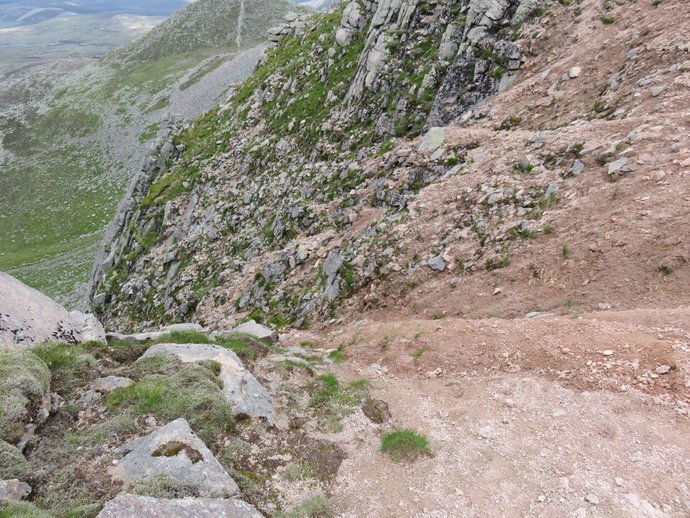 and then onwards to the start of the up to Cac Carn Mor and Cac Carn Beag.

Anyone for a staircase

The return for those just doing Lochnagar

Got to Cac Carn Mor which is awesome in it's own right. Mr Whippy anyone Checked out what I assume is an iconic gap. I suspect completely covered in the middle of winter, chocked with ice and snow

Very quickly I was up to the incredible Cac Carn Beag (Lochnagar) and it is very entertaining all round.

To the Caringorms and the North

To the South and Coire Lochan nan Eun

The Canadian couple were there having another snack break and admiring the views from their perch and looking happy and contented.
The water in the pools was incredibly blue

so much so that I asked the Canadians to confirm that the water in the small pools was actually dark blue and they agreed it was, so democratically so far the water was dark blue, cast your vote in the poll Knowing I had a very long way to get all the way round I didn't linger, pressing on to the next stage down and up to The Stuic. A reasonable path although quite eroded in places

Nice views into Loch nan Eun on the way I carried on to what looked like it was higher and certainly a bit more interesting on the other side of the gap and had lunch, at about lunch time Lunch over and it was the next Munro which is described as being a bit of a rounded mound of grass and those who describe it so aren't far from the truth, probably there isn't much you can debate otherwise really, it is a rounded grassy mound Got there and then got a bit confused again as what direction to head in, but eventually sorted it out and traversed my way down to the path leading across to Carn an t-Sagait Mor crossing the Allt an Da Chraaobh Bheath on the way, very picturesque As you can see much off the plateau is very lush and green. The track after the burn was a bit squidgy in places, but nothing more that waterproof walking boots advised. I'd put on my leather boots expecting parts of the walk to be very boggy, but it turned out that on the day I would have gotten away with the waterproof canvass one's.

The track from Stuic down and across

There is no actual path that I found up to the summit from where the WH gpx says to turn up, but the going is pretty easy. I saw several mountain hares on the way, but just about every time I spotted one they would make fifty metres up the hill before I could get my camera out

a tad faster than me.
Anyway if you want to see a mountain hare about to leap off into the distance then this is the best of the pics Got to the summit and there are two cairns, so I did both of them to make sure otherwise it is a long walk back I was quite relieved at this point that I would now be walking back in the direction of the car. Although the day had started a bit chilly with the jacket and even the wooly hat on at times, it had now heated up somewhat and I could feel my feet starting to cook in the leather boots.

The path to Cairn Bannoch was easy going, even getting down to and across the bealach was easy, though I would imagine it would be a squelching mess eariler or later in the year. For some reason I don't know what I'd had this in my head the whole way round. Perhaps I'd read a report or seen photos and although I hadn't registered it my subconscious had and was now bubbling it back into the conscious. Whatever the reason the views from Broad Cairn are amazing

Broad Cairn is in itself quite unique, sort of like a big tore that has been squashed down with a big hand but what can be seen from it is awesome,

Allt an Dubh Loch making it's way down Loch Muick with a distant Mount Keen I presume

The Allt an Dubh Loch was for me the spectacular view, but nothing shabby about the rest of it either

My feet were boiling and starting to get sore in this now calm and warm Scottish evening.

I could sense the midges getting ready, feed me now

and picked my way carefully down the boulder field towards the very promising looking motorway of a path leading to the lower plateau, it looks about thirty feet wide

Eventually I got through the bolder field and progress was then quick to the choice of route back. I couldn't decide and changed my mind several times

Another recent report had said the path down the side was steep and they had chosen the high ground with better views. Although perhaps steep. I'd looked at the gps, it was steep, but that would be straight down and surely the path would traverse, it traverses. The start of the path also looked exceptionally well maintained and would provide some close up views of the cliffs and waterfalls at the top of the Glen. Also it would probably be slightly faster, hot sore feet. In the end I continued along the tame route although I may well cycle back in on the bike sometime and check out the other route.

I did take a photo of the path down, looking back from further on and it seemed fine Views of the loch with it's very steep sides from the high road were beautiful, so I would think whatever floats your boat so far as choice of path is concerned Notice how calm the loch is. Interestingly although the midges were out and about they never really bothered me. One or two red dots today, but nothing major, perhaps I am at last becoming somewhat immune to them

Views of the top of the loch from the high road after which I could see it was a straight forward march back, phew

Even at this late stage there was one last nice moment as I scared what I initially though were deer into going for an evening dip, before I heard the cackling and realised they were geese. They really did look like deer running down from their feeding in the large grassy area at the side of the loch in this low light and from a distance I think they were actually disturbed by another walker a few hundred metres ahead of me who I couldn't see from where I was. Pity as I would have had the opportunity to get some great shots if they hadn't fled quite so early.
Sais la vie

Marched the rest of the track and back to the car to get my boots and socks off asap, my feet were roasting

I was going to drive out in bare feet to let them cool down completely, but in the end after about ten minutes put on socks and the canvas boots. Even after the ten minutes they were still hot to touch

Feet aside this is an amazing walk. If you're not on a mission to get your tally of munros up then walk in and do Broad Carin and Cac Carn Beag as individual mountains; the terrain and hence views are spectacular