With a day off work on Monday 8 June, I booked a room at Netherdene B and B in (the northern) Troutbeck for the Sunday night. I wanted some ridge scrambling practice as I was going to Glen Coe later in the month to do, among other things, the Aonach Eagach. So Sunday was spent doing a Helvellyn round with the other two famous Lakeland Edges. So to Monday, and I drove to Mungrisdale. This round of four Wainwrights would often be taken clockwise, generally the better way to do it. I had reasons for going in the other direction:

2. Bowscale Fell was on my 'direct ascents to do' list.

3. I'd done the circuit twice before clockwise, the second time adding Mungrisdale Common. Each time I'd used a different descent from Bowscale Fell. An anti-clockwise circuit gave the opportunity for a 3rd variation, The Tongue, which was better done uphill.

So I set off from Mungrisdale, the weather ideal. 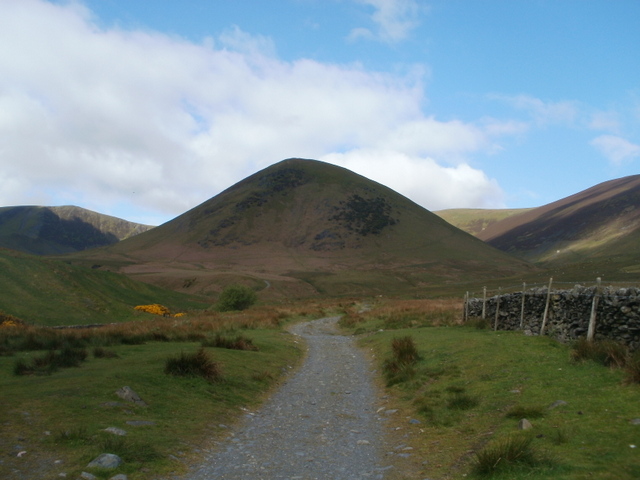 Heading for The Tongue

It was quite a steep ascent onto The Tongue, and a climb I enjoyed. Looking back to the River Glenderamackin

Then followed a trudge across sometimes marshy grass to Bowscale Fell. Western and NW Fells and Skiddaw from Bowscale Fell

Next it was on to Bannerdale Crags. I'd also climbed this hill the previous year by direct ascent via the east ridge; a good way up. Then it was time to go for Blencathra. I reached the summit (Hallsfell Top) to be greeted by superb views in the fine weather. The view south across Lakeland from Blencathra

Next it was time to move off along the eastern edge of the summit plateau... Scales Tarn from above Tarn Crags

Sharp Edge came into view and looked just a bit intimidating when approached from above. I began the steep descent east towards the edge. I've climbed this way twice and this section then presented no difficulties. Coming down it was a bit more awkward and just a little hairy. Climbing down towards Sharp Edge

The views of Scales Tarn all the way down via the ridge were beautiful. Scales Tarn from above Sharp Edge

Moving down a bit further, I encountered a Cumbrian scrambler coming up. He said he'd climbed up Sharp Edge hundreds of times, but could count on the fingers of one hand the times he'd descended this way. Moving further down towards Sharp Edge

The bad step was reached. This bit also seemed to cause more adrenalin taken in this direction than on the two previous occasions when I had ascended this way. Sharp Edge and the bad step

Once past the bad step, moving down the arete became enjoyable, with spectacular scenery all around. Plenty of care was still required, though! One or two more people were coming up the ridge. Before long the descent of the edge was over. Looking back at Sharp Edge I took the path leading to Mousthwaite Comb. On the way I met two women on their way to Sharp Edge. One of them had done it before, and was looking forward to going up again. But she said she wouldn't fancy it downhill!

Mousthwaite Comb was reached before long, and I moved onto Souther Fell. Bowfell and Scafell ranges and Great Gable from Souther Fell

Then I began the descent NE. Although not too far south of the Scottish border, I'm always struck by how typically English the scene is when looking down at the Mungrisdale area from these hills. Back at the village, it was back into the car and home. 15 days later in Glen Coe, I met up with Cat, a WH member from Fife, and we conquered the Aoncah Eagach.

The area around Blencathra is one of my favourite stamping grounds and re coming down onto Sharp Edge is as you say more of challenge than going up it.

Well done on a great walk

Nice one Simon, great report. Sharp Edge is definitely a lot trickier coming down. The trickiest bit, I think, is the slab just above the nick where the edge adjoins Foule Crag, though there is an easier gully just to the right (left going down). I have a lot of respect for Sharp Edge, as someone I knew many years ago was killed on it when he slipped in wet conditions. It's not to be underestimated!

Thanks, RTC and dav. The accident dav mentions fully justifies RTC's decision to turn back. Halls Fell is a great way up. And Sharp Edge should certainly not be underestimated.

Ancancha, it was good practice, which would also have worked vice versa. I learned a lot on Aonach Eagach which would have facilitated a more efficient and less fearsome descent of Sharp Edge.

Cheers, trailmasher. Blencathra is a fine hill. Coming down Sharp Edge, you really notice how polished the rocks are, even when they're dry.

I can certainly see the value in practice terms for bigger things but having looked down upon Sharp Edge I'm not sure I'll be trying it any time soon. It's a very nice corner of the Lakes round that way.

johnkaysleftleg wrote:I can certainly see the value in practice terms for bigger things but having looked down upon Sharp Edge I'm not sure I'll be trying it any time soon. It's a very nice corner of the Lakes round that way.

It is a great place, Anthony. Remember, Wainwright appears to have done Sharp Edge both ways. He may have used the bypass path, but this doesn't dodge perhaps the trickiest bits. He didn't get up the Howitzer, which you did! You should be OK taking on Sharp Edge uphill, at least.


Thank you, Chris. I'm sure there are plenty of Canadian views which do your heart good too.

simon-b wrote:It is a great place, Anthony. Remember, Wainwright appears to have done Sharp Edge both ways. He may have used the bypass path, but this doesn't dodge perhaps the trickiest bits. He didn't get up the Howitzer, which you did! You should be OK taking on Sharp Edge uphill, at least.

The difference between Sharp Edge and the Howitzer is what happens if you slip.