The one where we had a row on Beinn lutharn Mhor

The one where we had a row on Beinn lutharn Mhor


Another belter of a day and what turned out to be perfect walking conditions. Both now sporting delightful "farmers' tans". Left Inverey car park at 9:50am and bike-walked the 6 miles through remote Glen Ey at a not-so-respectable 6mph. Hubs taking no chances with sunburn today..hence the long trousers Plenty of suncream on...no long trousers for me. Steep bit. Well it's steep for the likes of us.

4 miles in we got overtaken by a lean, lithe woman in her early 70s. She speed past us, having sufficient energy to shout out a cheery (totally breathless) greeting.
We stopped in our slow tracks opened mouthed as her hubby/partner followed in her wake approx 1/4 mile behind. What a woman! 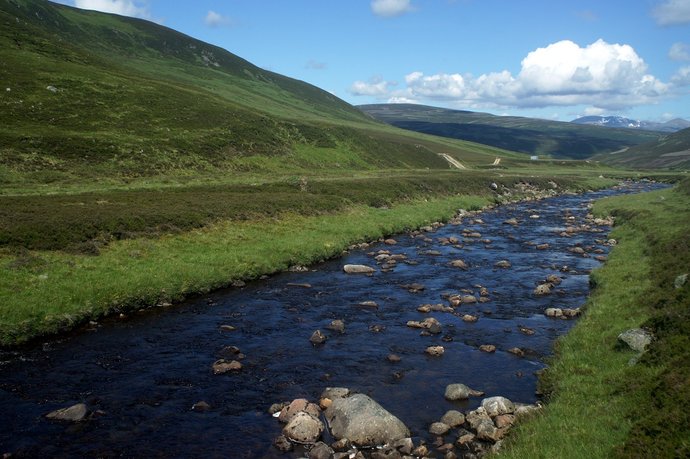 Left the bikes just beyond Altanour Lodge and marched off in the direction of Carn Bhac. It was at this point that we spotted a Golden Eagle swooping in low. Absolutely stunning but he didn't stick around long enough for me to hoick the camera from it's snug hidey hole. Ahhhh the one that got away!

Initial part of the trek to Carn Bhac was tiresome with all the high-stepping (think John Cleese) through the heather on our pathless trail. However Carn Bhac revealed itself in all it's not terribly impressive glory and we made it up to the summit just in time for a lovely lunchbreak. Carn Bhac. Not a very dramatic hill at all...but a Munro nonetheless I spotted a group of Dotterel and managed to capture them on camera and then began the descent. Ptarmingan eggs...we think. All hatched out and empty. I arranged them to look pretty

Next stop, Beinn lutharn Mhor....just the small matter of the peat hags first. Thankfully the very dry conditions made the hags as pleasant to traverse as I imagine they'd ever be. On the peat hags we spooked some grouse parents who courageously abandoned their baby. Fortunately it was just Hubs,me and the camera. Bad parents. Appearing on Jeremy Kyle soon.

Peat hags behind us...and ahead the ominously steep slopes of Beinn lutharn Mhor. A slow and arduous ascent. This was a beast.

On the steep, steep slopes was where we had our big row. I insisted on tracking fairly straight up through scree. The Hubs opted to traverse this way and that keeping to mainly grassy sections which were clearly FAR more stable underfoot than the loose scree that I was battling with.

He shouted at me to get across to the grass but I was struggling to go ANYWHERE. He shouted some more with rude words thrown in and I shouted back with ruder words.
He stomped off.
I sat down in a strop.
Hubs made it to the top and disappeared. I sat in a mighty huff on the loose scree, really hoping that it didn't give way completely and send me hurtling back down from whence I'd came.

Eventually I made to the b****y grassy bit and stumped upwards to where Mr Smug was. Summit cairn up ahead. Behind me is a fuming Husband (slightly smug)

We made it along the impressive ridge path, skirting the dramatic corrie in complete silence. Posed for a few summit piccies. Hubs has HIS sulky face on now. He's not happy with his wife tho' Glen Ey coming into view beyond the second cairn on Beinn lutharn Mhor.

All fine until the descent got really steep. The Hubs and Glen Ey stretched out before him Last photo of the day. Somewhere down there are our bikes.

Very tricky underfoot and focusing on trying to stay upright in the slippery conditions meant that the cause of the row was forgotten and after an interminable heather track we eventually located the bikes and began the last stage of our journey.

Spirits were lifted on spotting the chained up bikes of the couple who'd overtaken us. They were clearly better bikers.....but we were the quicker walkers.

The return bike ride was very zippy and we were back in 40mins. I only fell off my bike once when trying to swat a biting horsefly on my shin. Over I went with the bike landing somewhere up my bottom. Only the Hubs saw...and he's seen worse, so no harm done other than a nice war wound on my right knee.

Your golden plovers a dotterel ,great day you had for walk.

donalmc wrote:Your golden plovers a dotterel ,great day you had for walk.

Thanks for setting me straight. Have amended accordingly.

Very interesting, I'm going to sneak up on Beinn Iutharn Mhor from Spittal of Glenshee through Gleann Taitneach sometime this week.
I think your Plover is a Dotterel as well, well done you

Hahaha...just love the 'row' bit...when we did these without bikes, the teenager lost the will going across the peat hags. Solution? Give him my mum's walking pole and suggest that its a weapon of mass destruction. .. He had a gas saving the two wifies and two dogs from the Russians, the Taliban, the Tories and anyone else he could think of. Needless to say he was at the second summit first, smiling his face off. A great day!