Round of Cwm Pennant

Round of Cwm Pennant


This is my first post so I hope I have done it correctly - sorry if the pictures are mixed up.

Cwm Pennant has precious little parking and Welsh farmers have exploited this with income generation schemes - you can hardly blame them. I did not check, but expect to pay at least £2.00 if you park at the head of the valley. I parked for free at a pull in near the telephone box and old chapel (not to be confused with the cemetry chapel lower down the valley). There is only room for two or three cars so please park responsibly. The only other place for one car nearby is a few hundred metres down the valley - it is obvious where I mean but I cannot vouch that all will be well.

I had a bad night with little sleep (in the back of the car) but made a bleary eyed start at 7.15a.m. but a mild attack of midges soon wakened me. Walk up the lane and through the gate on the right just before the road swings left. A farm track follows interspersed with tussocky grass and then a moorland walk aiming for the SW ridge of Moel Hebog. It is a bit of a plod but its SW slopes have the highest concentration of Bronze Age round and long huts in Wales - they are easy to find and add interest to this part of the walk. The summit of Moel Hebog is a wonderful view point and from here to the final peak of Mynydd Graig Goch it is glorious all the way.
[img]
Cwm%20Pennant%20(15).JPG
[/img]
A big steep drop follows to the low col. The next two peaks are rocky and geologically curious. The rock has changed to a rough brown conglomerate – it looks like concrete. The route progresses through a narrow cleft and up to Moel yr Ogof and then onto Moel Lefn, both a little rocky and very pleasant as the views start to open up. The descent from Lefn is characterised by an obvious change to slate underfoot and the workings of man are soon evident with huge holes, caves, water filled tunnels, levels, trackways and ruined buildings. I stopped to rest at one such hole near a tunnel and was fortunate to see a ring ouzle at close quarters. I have only seen this bird in Scotland before, the first time being at The Quairaing.

A choice must be made now: extend an already long walk to take in Y Garn and Mynydd Drws-y-Coed by way of the forest (loss of height here) or head for Trum y Ddysgl along its elegant steep grassy ridge. I chose the latter but those feeling fit enough could still take in the two other peaks from Trum y Ddysgl but it will involve retracing steps. On account of my lack of sleep I slept in the sun for a couple of hours when I got to the top and this is reflected in my time for the walk.
[img]
Cwm%20Pennant%20(39a).jpg
[/img]
Trum y Ddysgl is on the Nantlle Ridge proper and is a superb view point. The Snowdon group, which has been prominent for a couple of hours or more, now feels very close. The sandy bays of Anglesey stretch away to the north west and to the south west we can now see the sea on each side of the Lleyn Peninsula with The Rivals standing proud. The Hebog ridge in retrospect looks even better than it did whilst crossing it and being mid-summer, Cwm Pennant looks incredibly green.

Most attention however focuses on the Nantlle Ridge at very close quarters. The extraordinary green crags of Mynydd Drws-y-Coed to the east contrast with the broad grassy ridge to Mynydd Tal-y-Mignedd with its 20' obelisk erected to commemorate Queen Victoria's Diamond Jubilee. This is our next objective and whilst the ridge is largely broad and grassy, close acquaintance reveals a rocky descent to the intervening col.

From Mynydd Tal-y-Mignedd the next peak is the best of the day: Craig Cwm Silyn. There is a dogleg descent to the col and a rocky zig-zag path to the summit - hard work with so many miles already covered. Those feeling fresher than I did may choose one of many scrambling lines to add to they enjoyment of the day. The views from the summit are very fine and remain so, but it is obvious that the best of the walking is now over.

There is However another peak to bag, the newly (2008) promoted Mynydd Graig Goch (now 210 metres) via the subsidiary top of Garnedd Goch. The walking is not exiting but the sharp loose rocks underfoot demand attention as the final summit is approached along its extraordinarily rocky ridge.

At this point I went wrong, and this accounts for differences in the route stats I provided compared with the gpx file. From the summit BEWARE. Follow the gpx route I created as I understand this to be acceptable walking. My route took me via the most westerly of the very straight tracks marked on the map (it follows a straight wall). Getting to the wall is not good (loose rocks amongst deep heather). Once at the wall there is a track but even in a dry spell was boggy. At the end of the wall the track disappears and the going underfoot is diabolical.

A fit party, taking the route on a cool, clear day (my day was baking hot) could complete the round in 8hrs 30min. 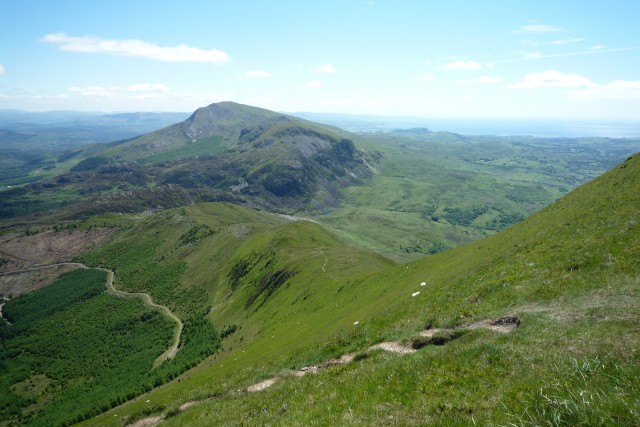 View back to Hebog from Trum y Ddysgl 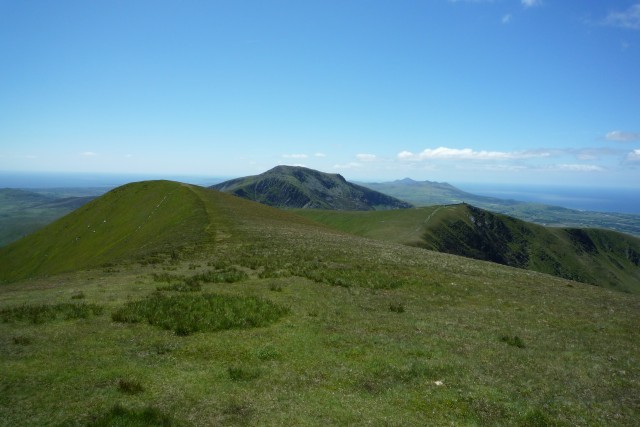 Craig Cwm Silyn and The Rivals 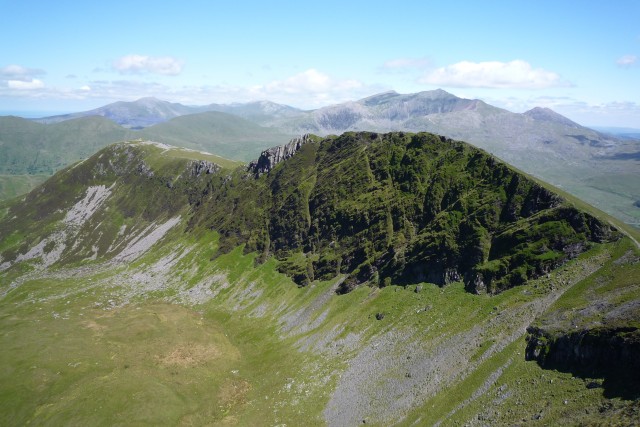 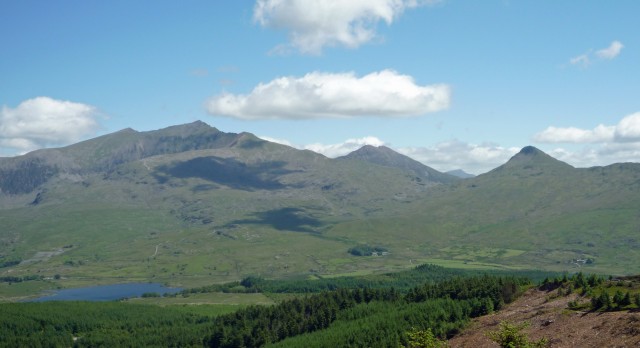 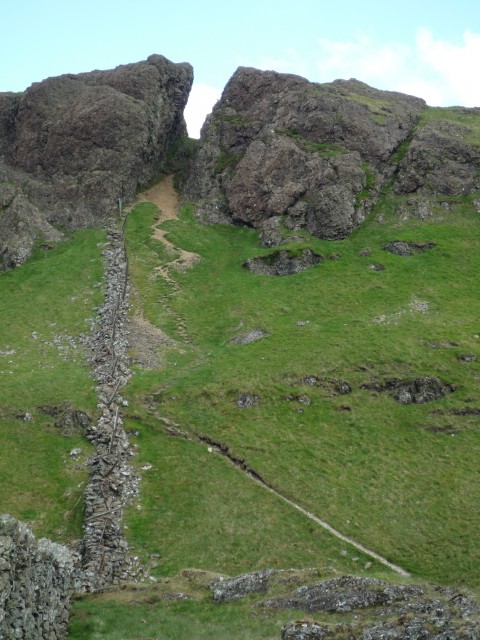 i really liked the photo of Mynydd Drws-y-Coed. It make me want to go to Wales!

Good route! I've never combined these hills before - it's always either been the Nantlle ridge or Hebog/Moel yr Ogof/Moel Llefn for me. The bit you missed (out to Y Garn) is also worthwhile if you come back.

LOL - I didn't find it a broad ridge between Tal-y-Mignedd and Trum y Ddysgl! I was surprised to get across it! It's a fascinating ridge though - I've never seen anything like it before - a flat and grassy topped but sheer sided rocky ridge - weird!

Great report and pics - haven't done the Nantlle for years, nor Moel Hebog and it's pals either

Did you find the ogof on Moel yr Ogof? We reckon it's just a joke made up by the Cwm Pennant farmers who sit all day looking through binos trying to spot walkers wandering round looking for caves amongst the loose rocks on the hillside

Thanks Mountain Coward. No, I didn't find caves.

I mentioned the grassy ridge between Tal-y-Mignedd and Trum y Ddysglas as one of the pics I posted suggests that it is like that all the way, the reality being a steep scramble into the col, not visible from my photo position. Great ridge though (hadn't done it before) and probably my favourite in Wales excepting the Snowdon Horseshoe and the classic round of Cadair.

I'm still, after many, many years, working up to being able to get along Crib Goch so we differ quite a bit there!