Aonachs.gpx Open full screen  NB: Walkhighlands is not responsible for the accuracy of gpx files in users posts

I live under the Saltire, retain an allegiance to the cross of St George, and wear my white Yorkshire rose with pride. But this was the first time I’ve marched to the waving of a Kernow cross. Not that I started the day planning to climb under what turned out to be a flag of convenience for an ad hoc motley crew.

Kernow? Kernow? Look at a map of the UK and locate the region furthest away from Scotland: Cornwall. Proud of its identity and self-belief, and not averse to the odd spot of flag-toting nationalist campaigning: ring any bells?

But more of them anon.

The Aonachs had been on my “to-do” list for far too long, and I’d managed to avoid the ethical debate about the gondola approach by balking at the cost of a tenner (see, still waving that Yorkshire flag) and by deciding to add a couple of adjacent hills to the day if legs and lungs proved willing.

The Glen Nevis approach was therefore the obvious choice. My day would hopefully see the four western 4000ers climbed, culminating in a visit to The Ben for the first time in over thirty years. As I have previously vowed never to tread the Tourist Route, there was also a more direct, if somewhat steep descent back to the car via the Bealach Cumhann that would also save any monotonous trudge along the road at the end of the day.

A 5.00am departure from Ayrshire meant that the roads were clear and good time was made to secure a second breakfast in Fort William. The bacon butty was devoured and I headed off up Glen Nevis – to the very end of the road. Human heads in midge nets dodged round the car park suggesting that the wee beasties were also having their breakfasts. Suspicious forethought and pessimistic planning meant that my bag was already packed, and all I had to do was thrust boots on in the car and make my 8.00am dash for the hills. An encouraging declaration to commence the day in Glen Nevis Looking back to the Steall Falls and Hut

As this was the furthest I’d ventured up Glen Nevis, it was a surprise when the valley sides closed in and the gorge tightened its grip on anyone entering its maw. This, of course, only heightened the surprise when the bowl of the Luib Shonnachain and the Steall Falls burst into view. I resisted the temptation to wander over and sample the delights of the wire bridge and instead headed on towards the old ruins.

Once there, the objectives for the first part of the day filled the horizon: Sgurr a Bhuic, Stob Coire Bhealach and the southern edge of Aonach Beag itself. I began what I suspected was going to be a strenuous trudge. A cairn marked the path towards Sgurr a Bhuic, at first close to the Allt Coire nan Laogh, then providing infinite options as it petered out. I opted for grassy slopes to the left of slabs on the skyline, aiming to reach the ridge at the point where a tiny lochan was marked on the map.

Ahead and well above I saw two figures veering further to the left who I expected to see again, perhaps as they reached Sgurr a Bhuic from the other side. Not to be.

When the shattered quartzite and geology of the Grey Corries came into view from the small cairn on top the other pair was nowhere to be seen. Nobody was following me up the ridge, and I couldn’t see anyone making their way up through the corrie below. I pressed on, descending to the bealach and carrying my curiosity as to their whereabouts with me. Keeping the precipitous edge to my right, I made my way along to Stob Coire Bhealach. There sat the mysterious two, scoffing a second breakfast while pondering the attractions of the Ring of Steall across the valley. They had made a bold direct approach up the slope and shunned the horseshoe round the outer edge of the corrie. Having done the other 4000ers in the Cairngorms earlier in the week, they had the same plan as me, aiming to climb these western four before heading back home to Cornwall with a complete set under their belts.

The Grey Corries from Aonach Beag

I plodded on alone, crossed the bare summit dome to the cairn of Aonach Beag and simply continued. The top, now finally bereft of its snow, is uninspiring on its own and impressive only in its setting and surroundings. I didn’t linger, seeking sustenance and a bit of warmth at the bealach between the two Aonachs.

The next stretch - along to Aonach Mor

On Aonach Mor I met the Cornish contingent again where they revealed their true colours: literally. They unfurled the white cross on a black background, attached it to a Leki pole and waved it madly for a series of selfies and GoPro coverage for their YouTube post. This had marked their progression and was to continue to the final Munro of the day.

Back at the bealach we teamed up again in search of the best way to take those dispiriting downward steps and lose all that hard-fought height before heading up Carn Mor Dearg. Is there a track? Should there be a cairn marking its departure down the steep slopes? Who knows? There may have been. I don’t think we found it. By now these two Cornishmen (Tom and Jeremy)had accepted the company of a Yorkshireman, and we pressed on. At the bealach the next challenge was what we feared to be a fruitless task: finding a track up to Carn Mor Dearg. The remnants of a wall gave us a clue and also revealed the hint of the path we sought.

Nearly four hundred metres later, with our gaze and attention having been constantly drawn to the swooping arête curving its way to The Ben’s rearing summit slope, we arrived at a true apex where a cairn marks the coming together of three distinct ridges in the smallest of spaces. And there we met John. He was surprised that someone would drive from Ayrshire for the day, and then became bemused by the appearance of the Kernow Kids’ homage to their homeland: the flag was flown and photographed for the penultimate Munro of the day.

Having crossed the golf course and made his way up from the other side of Carn Mor Dearg, John was still contemplating his next move. After a touch of swithering, and the offer of a lift to Fort William and the golf course if he wanted to join us, the Kernow Pied Pipers picked up another waif to join their merry band.

So, with adventure on the arête snaking away in front of us, this foursome followed the teeter-routes and the chicken-routes. We crossed the slab described by the indomitable photographer and guide-writer Poucher as a coffin lid, and soon found ourselves at the sturdy cairn marking the base of the end of the excitement. The start of the final slog. Here the miles and the metres began to take their toll on me. I struggled to find a low enough gear into which I could change without finding reverse. “You’ve got youth on your side,” was my lame excuse to the others as they sat waiting above, having pulled ahead and my pace slowed even further.

“We’ll finish this together,” came their reply: testimony to the teamwork and companionship of strangers whose orbits meet on the hills.

And so we did.

Suddenly, from a flat patch of snow, grew the jumbled paraphernalia of The Ben’s summit. At first we thought Antony Gormley had found a new location for his cast-iron figures, relocated from Crosby beach. Clusters of erratically dressed visitors were scattered on and around the cairns, the ruins and above the cliffs, gullies and ridges that all meet within such a small area.

The owners of worried glances that witnessed a black and white flag being unfurled in a very public place breathed a sigh of relief as they saw its simple design, even though few knew its meaning. We added to the never-ending round of “will you please take our photographs,” and huddled around the trig point with the flag unfurled for the final time on Tom and Jeremy’s challenge. 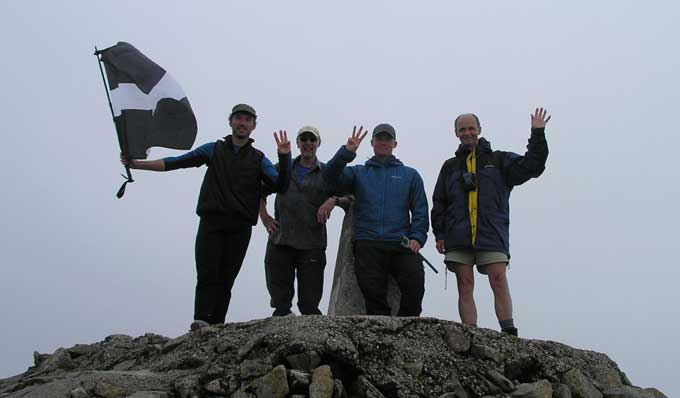 As those arriving joined the photographic throng and ceremony, and those departing went their separate ways, we went ours. After passing a couple of the steel poles on the descent to the CMD arête, we headed south; steeply south, first over jumbled and stones occasional stretches of scree, then grass. The Bealach Cumhann beckoned and we followed, down to the point where we could actually see the cars parked inGlen Nevis below. Mountain man: lord of all he surveys

Before descending too far we crossed the Allt Garbh, aimed for the more open slopes of the Mam Cumhann that lead into the woods below. We joined the river-side path less than a kilometre from the car park – and that was sufficient for me to call it a “circular route.” Just two hours from summit to car and the first people we met were walking to the Steall Hut: crowds well and truly avoided.

After a superbly satisfying day, I left to head back south, Tom and Jeremy had salivated over the Ring of Steall, and John was heading for Ullapool.

We all arrived from different directions, coalesced for a shared day and then dispersed again to different hills – and who knows – to meet again?

Aonach Beag and Aonach Mor beyond from Stob Coire Bhealaich