Station to Station...Train to Vane

Station to Station...Train to Vane

our_route.gpx Open full screen  NB: Walkhighlands is not responsible for the accuracy of gpx files in users posts
I know this is about hills but recently I'm getting exercised about transport. I did Ben Vorlich by train from Edinburgh so it was about two hours longer than by car. But I got a pint and falling asleep for 15 minutes on the way back wasn't as devastating as it might otherwise have been. Anyway I'm retired, time's an elastic quantity. Because of work on the Winchburgh tunnel I travelled on the stoppity train through Bathgate. I was surprised at the price of the ticket, then cut it by £6 by buying tickets from Edinburgh to Uphall and then Uphall to Ardlui. I don't even know what street Uphall's on. Scotrail- every encounter is like a weird role-playing game.

The train ride's brilliant. The Clyde to Dumbarton, Dumbarton Rock, Loch Long and tantalising glimpses of the Cowal Grahams. Off at Arrochar and the path goes out of the back of the station. It's good quality but starts with a 20 metre climb which it tends to repeat at intervals. Great cardiovascular exercise but I was feeling resentful. It's through forestry at first which gets boring, but then drops into Glen Loin, a nice mini-strath then an upland glen, with views of the classic profile of the Cobbler. 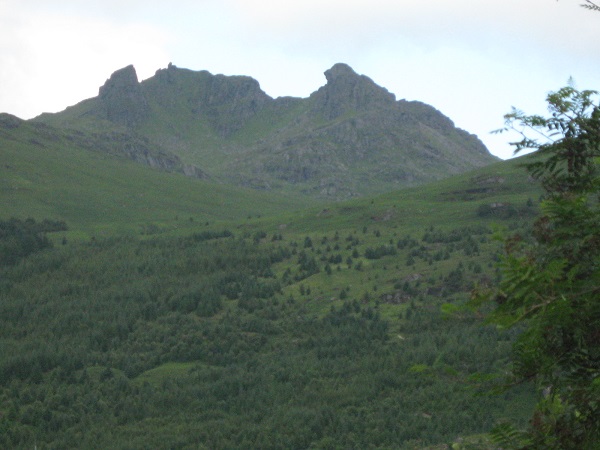 The path also gives you more idea of the shape of Vorlich than you get from anywhere else. 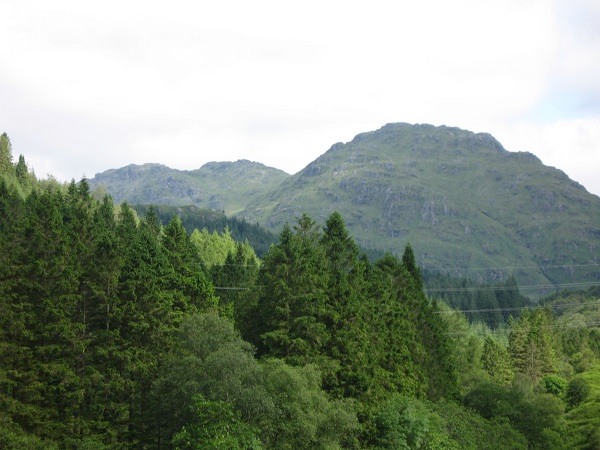 It comes out at Coiregrogain at that path-end you've probably wondered about for years.

I'd been going to do one of the baggers' paths but the road was quite busy so I launched up where I thought I saw a faint trace up the hillside. 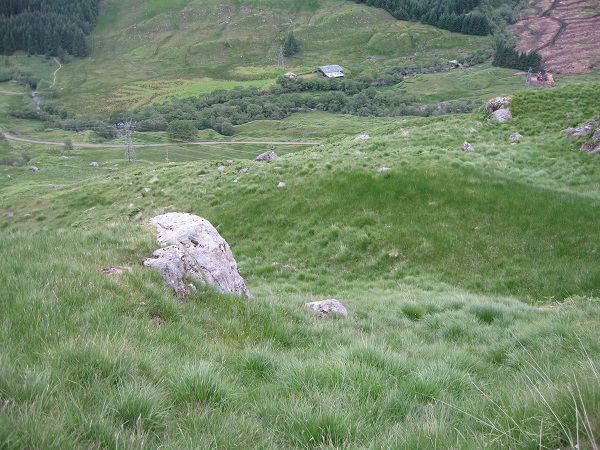 I swear it's a path

Well it wasn't a path at first but after a while I convinced myself there had been footfall before, human or animal. Then I met the path-maker. Anyway most of the Arrochar Alps lend themselves to free-form approach and this was pleasant. On the ridge I encountered traces of the old path. My Munro book describes this as the main route and the one from near the Sloy dam as an alternative. Looks like role reversal has occurred.

I'd the summit to myself. Good visibility, though MWIS had said it would in fact be perfect visibility so I tutted a little. I tutted more at the wind. It was totally Baltic and gave no reason to linger. Mostly I go down by the Little Hills but for ease I took the north east ridge. I most recently came up this in crampons, in summer it's hands in pockets. Once off the ridge the path is indistinct, even below the wee dam.

I'd 45 minutes in hand so I treated myself to a pint of Golden Bay, a good cask ale from Belhaven for once. The Ardlui's now a marina - at £4 a pint it can afford to be! The train down Loch Lomond's great - that wee bit of elevation gives a fantastic view. There are 26 stations between Dumbarton Central and Waverley. I slept through 12 of them.

A week later I did a Ben Vane circuit from Arrochar Station. It was 24k and 1500 metres so a bit hairy for train times. The Vorlich trip I'd recommend, but this I'm just recording. I crossed the glen at Arrochar and went along the forestry track. The high point was early on when I found the old path for the Cobbler, leading straight up the hillside on some old industrial wreckage. I couldn't locate it descending from a'Chrois earlier this year. Otherwise I could have been in the Black Forest, ho, hum.

The climb of Ben Vane by its south west ridge is pleasant. I descended the hill north then east - when I've done this before I've headed just south of the dam. I was conscious of time so I skirted the summit further south than usual - a mistake as it took me into horrible tussocks. It was swift but I took more headers than is fun.

I was now iffy for my return train, about 9k to do in a bit over an hour and a half. With 20 minutes left I reached a sign 3.6k to the station. Now the only useful information you'll get from this note is that it's in fact only about 1.6k. Not being sure of that, I anxiously climbed what now seemed a mountainous ridge then ran the last kilometre. I heard a party I went by say "He's mad", clearly disturbed by a wee old man passing out under a rucksack. I arrived with 10 minutes in hand. The train was 10 minutes late. My body still feels damaged.

I hadn't a camera. Here's a picture of the 12 Pins instead.

These little gems seldom top 600 metres. Next time you're tempted to go to Ben Wyvis, think about it. You can get to Connemara as easily from Edinburgh.