As usual the best laid plans of munroists and men had to be changed at the last minute. I had planned my first wild camp doing the circuit of five round the end of Glen Lochay, but with a forecast of heavy rain and a dodgy back threatening to call the whole thing off, I focussed on getting five munros elsewhere.

The Glen Lyon horseshoe looked perfect, bit further east for the the better weather, and plenty of escape routes should any injury come to the fore.
A 2.5 hour drive up from Glasgow in the warm sunshine I was ready to walk from Invervar just before 10am. My later start meant I couldnt get parked in the car park but was a bit further down the Glen Lyon road. There are some works going on here at the moment, so an alternative start is made from Lint Mill, just follow the green and orange posts. After the mud slopes and onto the hillside

The first stretch through the woods is pleasant enough, climbing a little as it goes, until you come out at the extent of the works here. A long muddy track leads up the side of the plantation and eventually arrives at an old metal bridge which swayed a little, and the path to the hillside. Despite the poor weather of the previous week, the ground underfoot was pretty solid and I made good progress up the south eastern ridge of Carn Gorm. On the way up I passed a few folks, one lad and his dog, and a group of 4. The guy with the dog, was Charlie and I ended up walking with him over the last two munros. Even though the rain had come on heavy at this point, everyone I passed was in good spirits, which in turn kept my morale up during the climb. As I went up and into the clouds the rain was coming down heavier and continued over the summit and down, so I didnt stop for long other than to take a couple of pictures. Fortunately at this point the rain abated and the wind eased a little and there were views north over Loch Rannoch. The path meandered round the back of An Sgorr and gradually climbed the easy slopes onto my 30th munro, Meall Garbh. The clouds had cleared the sun was poking out, and I laughed to myself as I was expecting it to rain ALL day. Munro luck on my side today! The cairn on Meall Garbh wont be forgotten quickly, its like a metal bonfire of sorts, but I didn't object to it too much. Nice to see something different on top of a hill!! 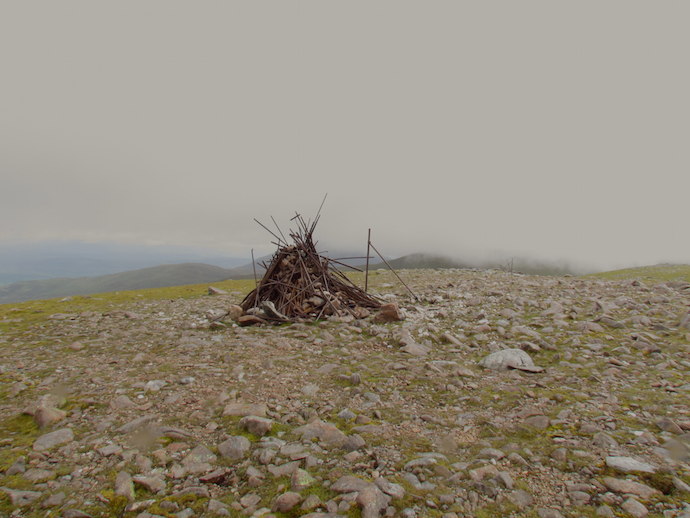 The wind was really picking up now as I traversed the undulating hills over Meall a Bharr, and I found a bit of shelter to stop for some lunch. Schiehallion was cloud free and commanded a great view. At this point I was caught up by Charlie and the two boys from the summit of Meall Garbh. We all left for Carn Mairg within a few minutes of each other and met up again at the top. The top of Carn Marig is really interesting and quite out of character with the hills i'd just been on, a huge rocky outcrop makes for an interesting feature. 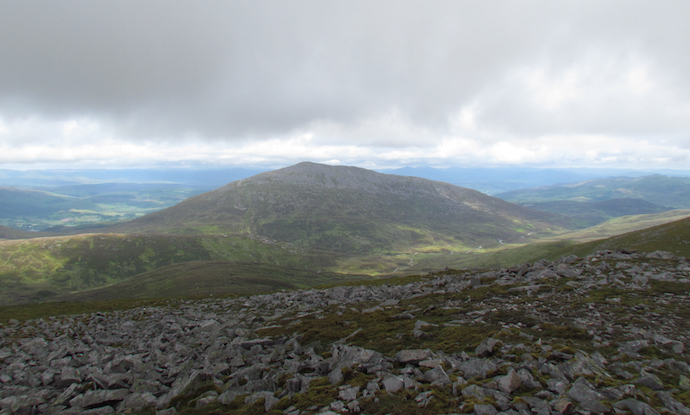 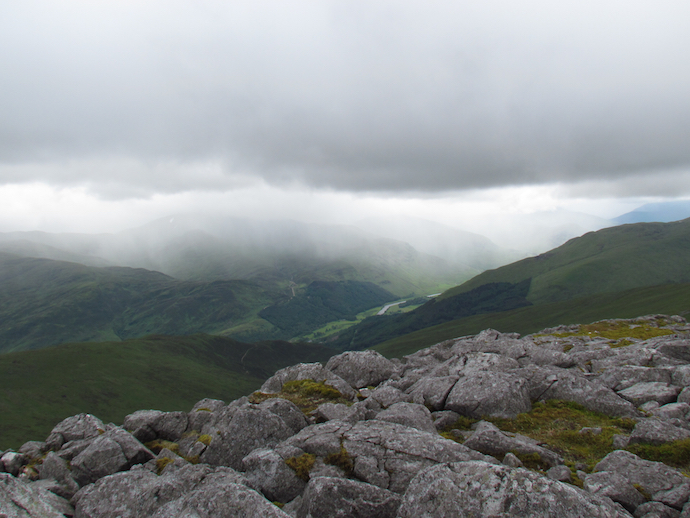 Heading off for the last munro I was joined Charlie and Willow the dog. He was aiming to complete as many munros over 6 days as possible for the charity Cruse. We descended some steep slopes to the east of Carn Marig and headed towards the last one of the day. Having done a fair few recently on my own, it was nice to have some company and chat, as a consequence we reached Meall na Aighean in no time at all. Chatting with a stranger on a hill is a bit like a first date...'where you from?' 'what do you do?' etc... Haha its all good fun! Glen Lyon round the days munros

Stopping for some photos on the final top, the views were great looking back where we had come from and up Glen Lyon. It really is one of the most beautiful glens we have. Further up the glen though I could see the anticipated rain clouds, and was hoping to get the tent up later in fairly dry conditions. Anyway, off the western top we followed the ridge back down the edge of the plantation and back through the woods to the start. All in, breaks included I took just shy of six hours to complete the round.

We parted ways and I wished him all the best for the coming days. I think he managed 28, so congratulations on that Charlie, top effort.

I drove west to Bridge of Balgie for a quick stop for some coca-cola (its my kryptonite after a climb!) and headed up to Lochan Daimh to find a pitch for the evening. I found a nice level spot and was grateful for the car as a wind break the next morning. The rain had come on a little now, but I got the tent up, dinner made and settled in for the evening. The rain came down steadily all night, and I heard the last folk come off the hill, walk past the tent and say 'bloody hell, I couldn't be bothered with that.' I just smiled at the thought they were soaked through while I was dry and warm inside! For my first camp since the West Way Highland way about 8 or 9 years ago, I was quite happy. Although I did forget to cap the inflatable roll mat, and so I just ended up with a flat mat for the evening. It was a bit uncomfortable but hey-oh, I'll not forget that next time! Better conditions in the morning

I slept on and off all night and woke got up at 7, packed away the tent, threw the mat and sleeping bag in the back of the car and headed off up Meall Buidhe at 7.45. I didnt go far enough along to pick the path and ended up going straight up the grass/heather until I met the path further up. Again I was surprised the ground was not too boggy, but care was needed getting over the peat hags. Cue some mini pole-vaulting to clear the obstacles. I then hit the ridge and climbed up into the clouds and over Meall a Phuill. Once up on the summit ridge it is very easy going, and even though visibility was down to about 15-20m the path was fairly obvious. The wind was strong though and I was buffeted as I headed over the tops to the summit cairn. A few years ago I would have felt a bit uncomfortable having no view, strong winds and being out on my own. Today I felt totally confident of where I was and comfortable in the gusts. Amazing to feel the improvement in experiences gained. I made the top in an hour and a half, and stopped for a quick bite to eat. It got chilly being stationary so I didn't stay long and headed back down. I really enjoy being up in the clouds with no view sometimes, I feel as removed from the world there, as when the views are extensive. Easy stuff on the way back down completing the circuit in 3 hours. I was having fun honest! I packed up the my stuff and headed back to Glasgow over the Lawers road. I love driving this road with the view changing all the way up and into the rain. This part of Perthshire is always its own ecosystem, I came out to Killin and the sun was shining. All in all a successful weekend and another five to add to the list. I think before I wild camp proper I will do a few more like this with the car and refine my kit. I felt it was a good way to introduce myself to camping while still having the safety of the car to fall back on.

Users browsing this forum: the bearded wanderer and 50 guests