Since I didn't bother going out today, I thought I'd pull an old report out of the bag, just for the good weather memories. In May 2008 I headed down to Onich to meet up with Dave B and stay in the hut which belonged to his club. I drove down after work on Friday, and managed to squeeze in a late evening ascent of Garbh Bheinn. It was a bit hazy and overcast though, so I haven't included it here. The next two days were perfect though, so I've put them together in a single report, since I didn't take that many photos.

The next morning, the weather was great, and we headed down Glen Nevis to do a bit of climbing at Polldubh along with Dave's mate Julian. We Did Three Pines, which is a pretty straightforward route for any half-decent climber, but I was struggling. I realised a couple of things here: a) 3 is a crap number for multi-pitch climbing, and b) I didn't really get a buzz out of climbing any more. So after the crux pitch, I took an easy way off the cliff, left them to it and dropped back to the road. 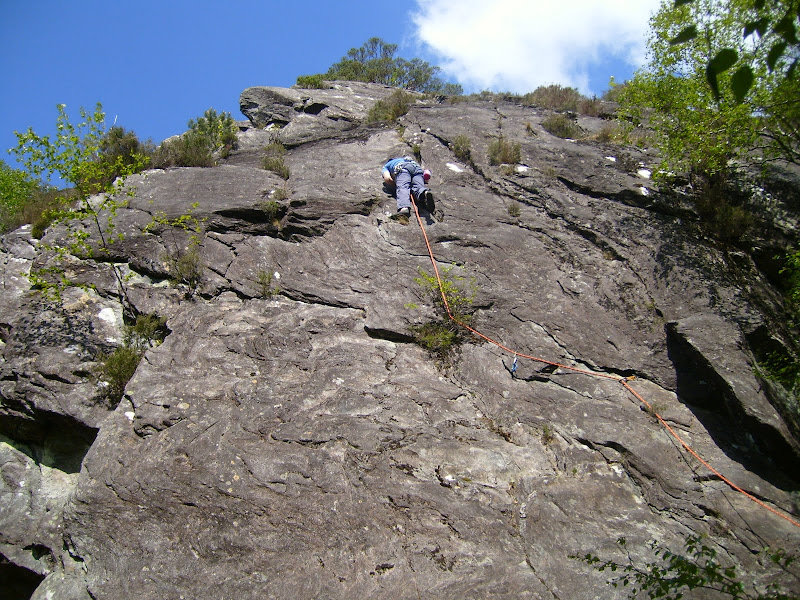 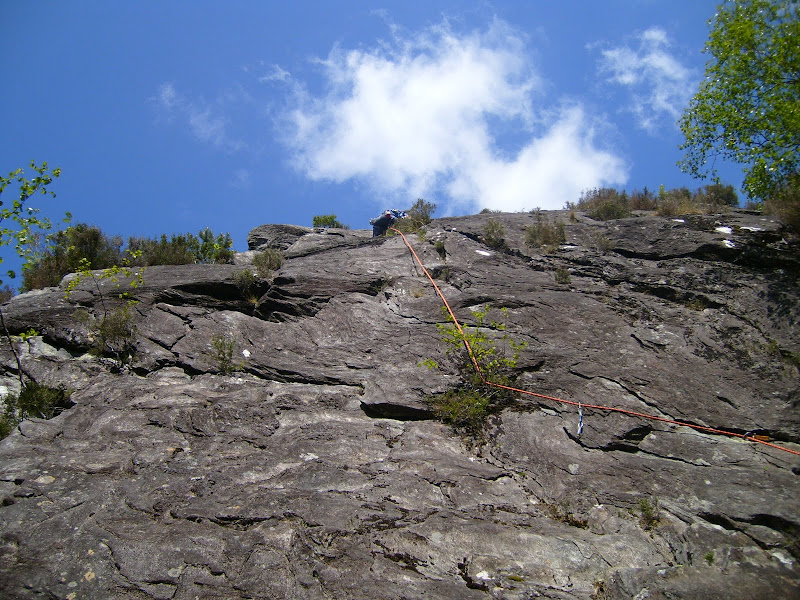 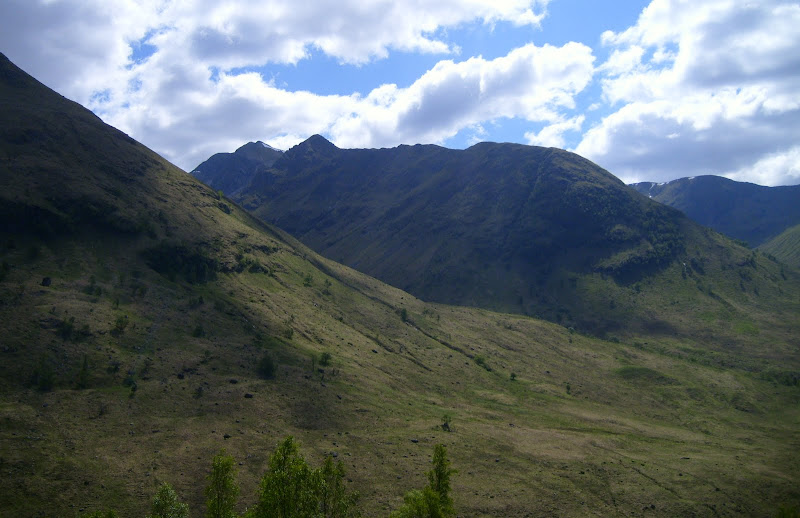 Glen Nevis.gpx Open full screen  NB: Walkhighlands is not responsible for the accuracy of gpx files in users posts
I waded across the river to do a quick ascent of Sgurr a Mhaim, which I had been looking at from the climb along with Stob Ban. Some steep grass led me onto a worn path, after which it was just a grind to the top. I'd never been up Sgurr a Mhaim this way before. The previous visit had been a winter circuit of the Ring of Steall, an unforgettable day out that I'd love to write up sometime. Must get a negative scanner!

Back to today, and it was perfect lounging weather, with good views. I decided to head for Sgor an Iubhair and possibly Stob Ban via the Devil's Ridge. The ridge was straightforward but fun, but by the far end, I realised I was short of time, as I'd agreed to meet Dave and Julian by the Polldubh bridge in order to go and pick up some barbeque stuff in the Fort.

The Devil's Ridge and Sgorr an Iubhair, Bidean in the background: 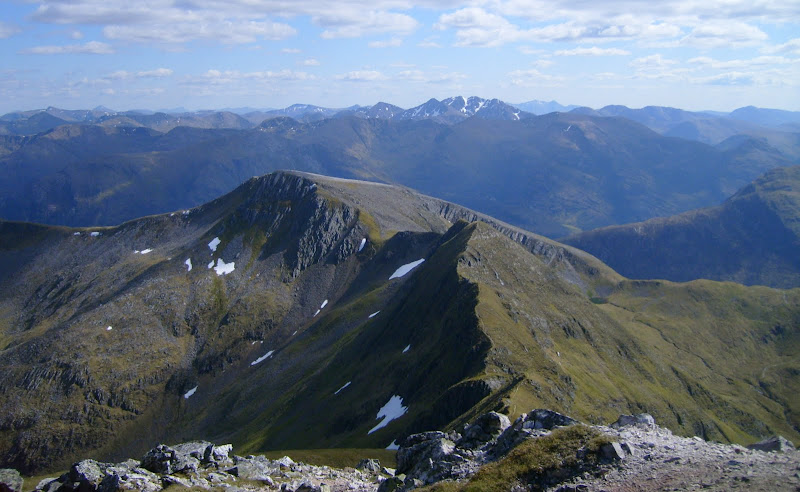 Stob Ban and Mullach nan Coirean with the Ballachulish Horseshoe and Loch Linnhe in the background: 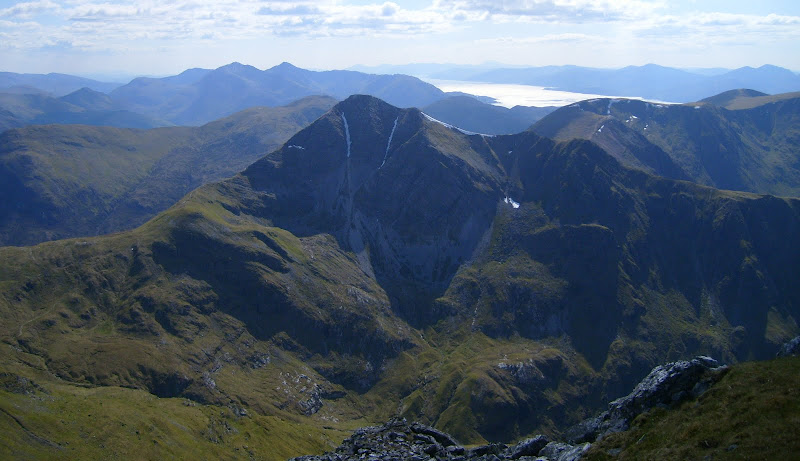 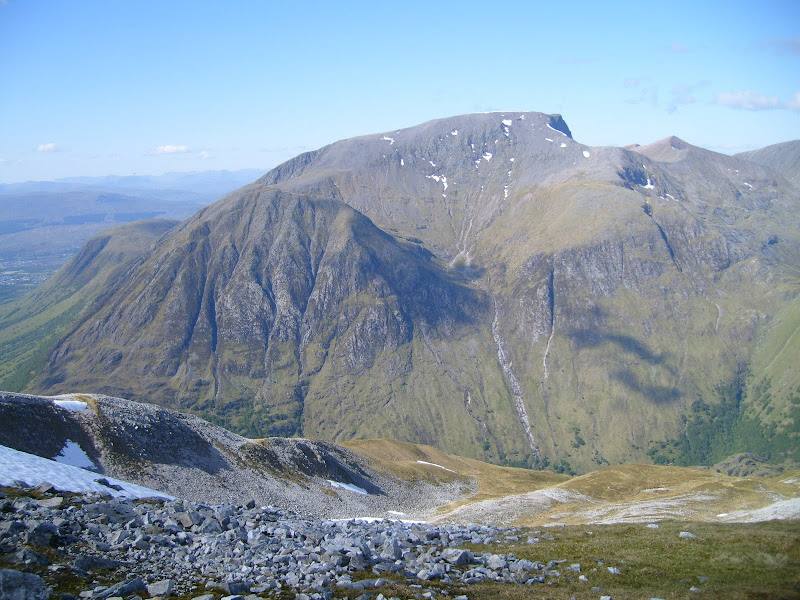 So I settled for dropping down past Lochan Coire nan Miseach onto the great Choire a Mhusgain path. While I didn't get to experience the N ridge of Stob Ban, the views of the E face more than made up for it. I've always felt that this face looks much more European than Scottish, even in the summer. 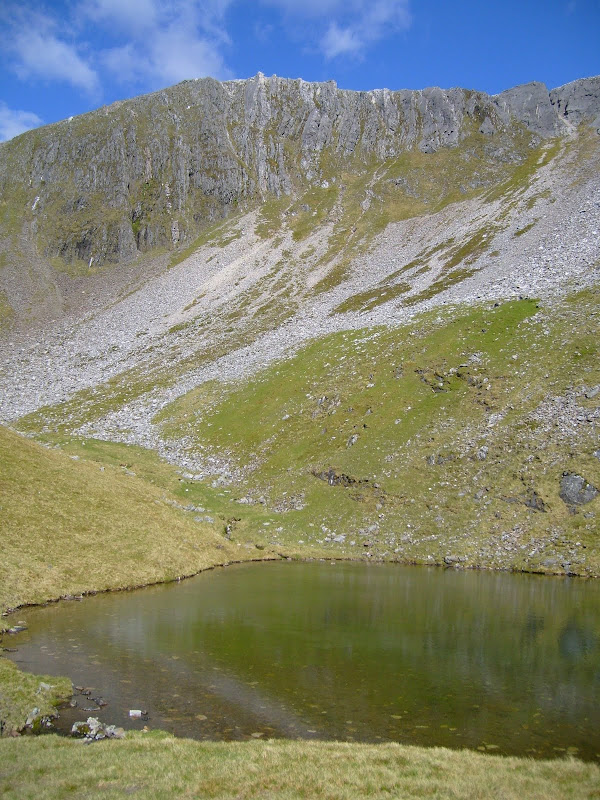 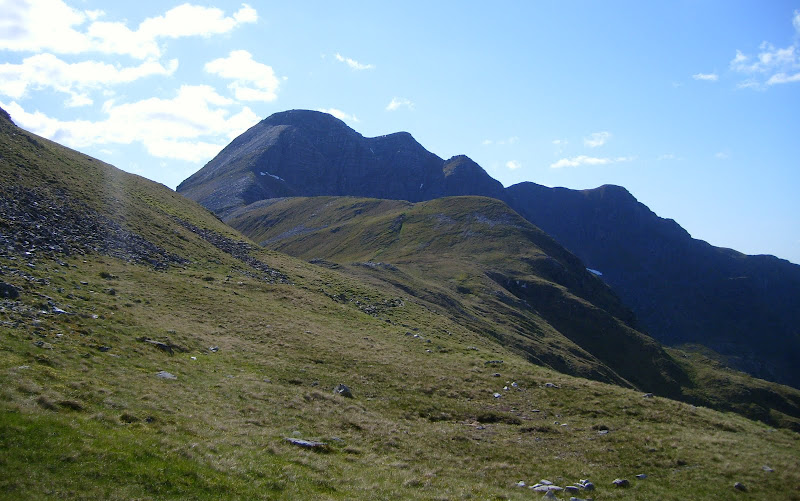 Coire a Mhusgain and Stob Ban: 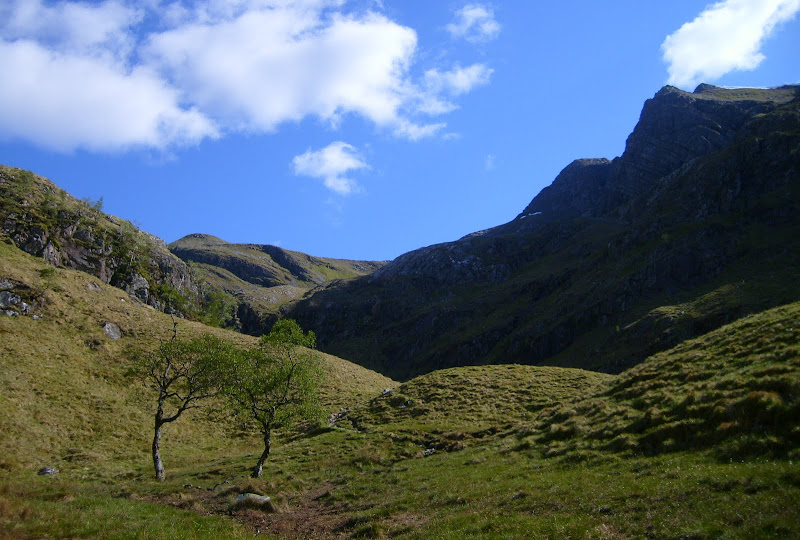 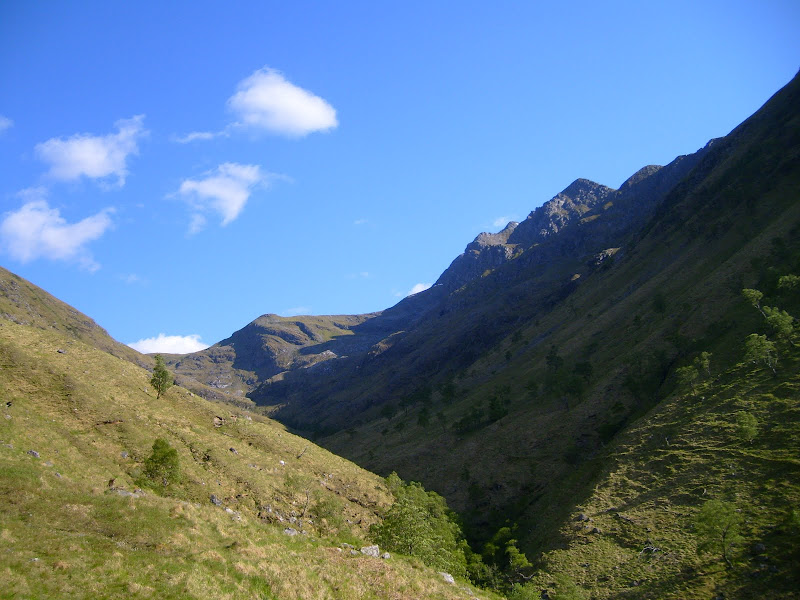 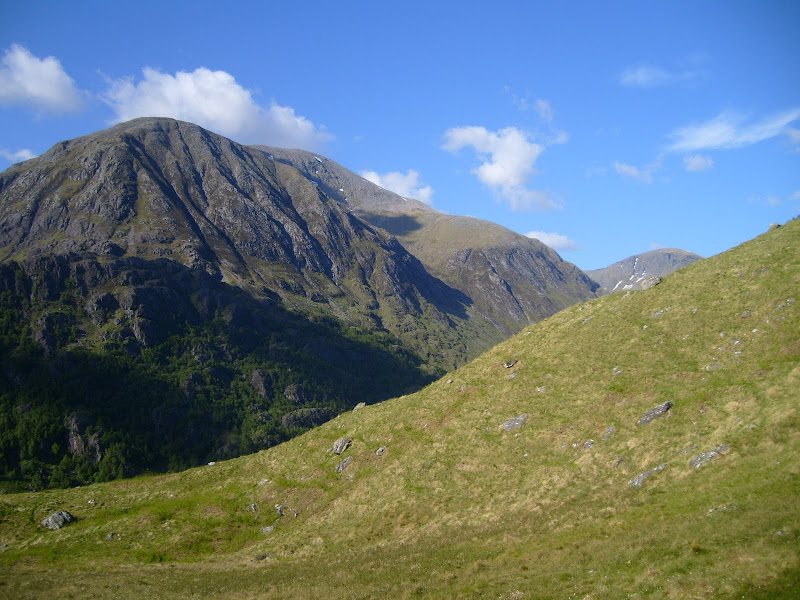 Down in time to meet the other two (who had gone on to do some classic climbs without me dragging them down), and a lovely little trip down memory lane. We then had a barbeque on the shores of Loch Linnhe

The next day, the weather was again brilliant, and Dave and Julian had their sights set on a climb on Gearr Aonach. I didn't fancy joining them, so went for a horseshoe of the Hidden Valley instead. Bidean had been my 3rd or 4th Munro, and this would be my 8th visit to the summit, although the first for a few years.


our_route.gpx Open full screen  NB: Walkhighlands is not responsible for the accuracy of gpx files in users posts
A May weekend in Glencoe and the road was heaving. I managed to squeeze into a parking space and followed the usual path into the Hidden Valley. I had forgotten how big the cliffs and gorges were in the area, and initially thought I would get onto the N end of Beinn Fada. That clearly wasn't going to happen from my starting point, so I carried on up onto the floor of the glen. I didn't fancy the eroded path up the back of the corrie, so I made a sharp left and climbed up the eastern face of Beinn Fada. The going was steep and a little loose in places - mainly grass and scree - but much preferable to the trade routes. In retrospect, it may be a little more awkward to find the optimum route back down this way (I suggested this as a descent route to someone before, and they had a bit of bother!)

Across the Hidden Valley to Stob Coire nan Lochan: 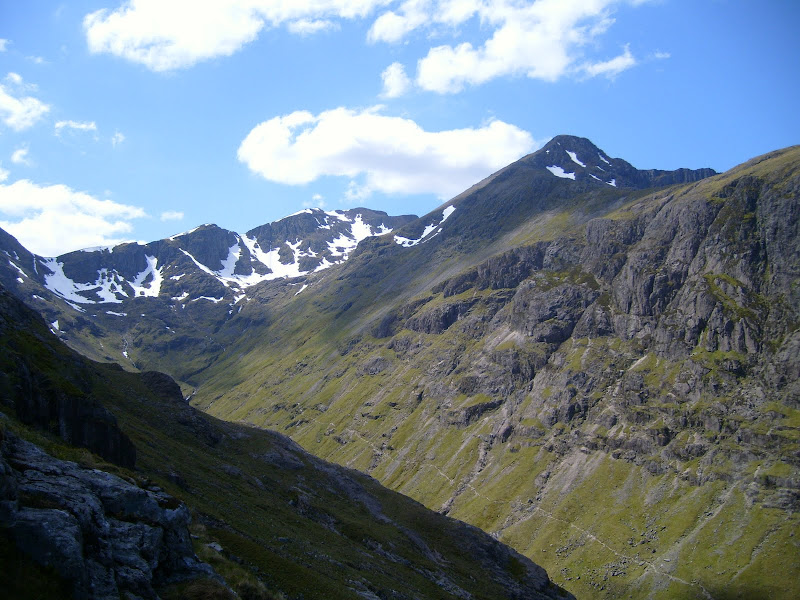 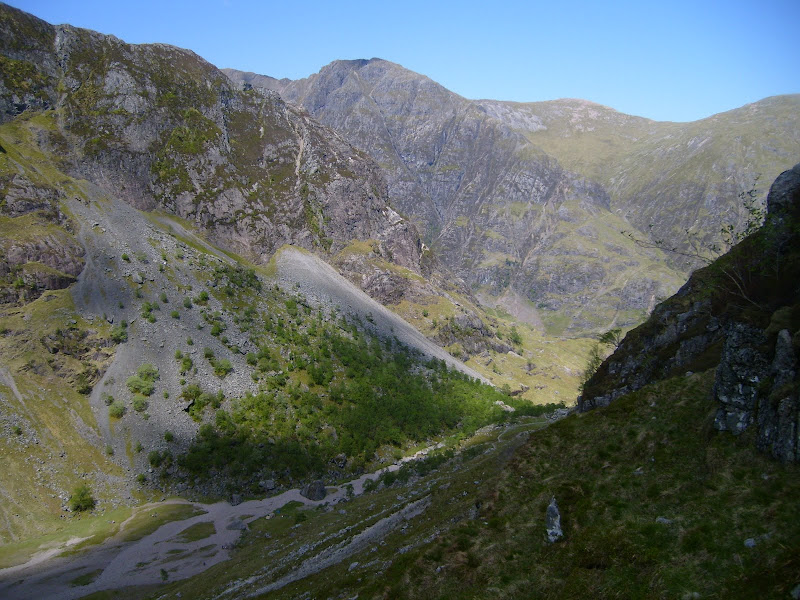 I hadn't been back up Beinn Fada since my first ascent of Bidean, which was probably in 1993, so I was looking forward to it. The traverse over to Stob Coire Sgreamhach was an excellent walk, with a fun couple of moves of scrambling that I'd forgotten about.

Along Beinn Fada to Stob Coire Sgreamhach and Bidean: 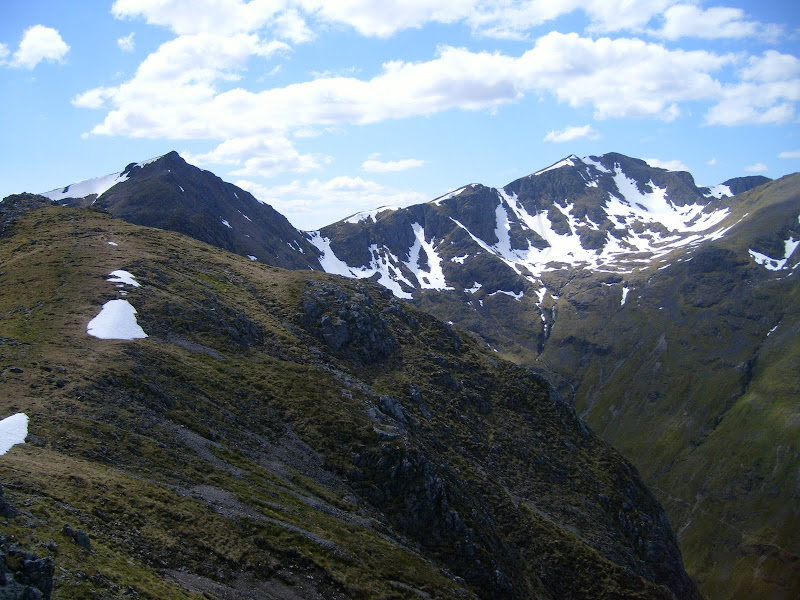 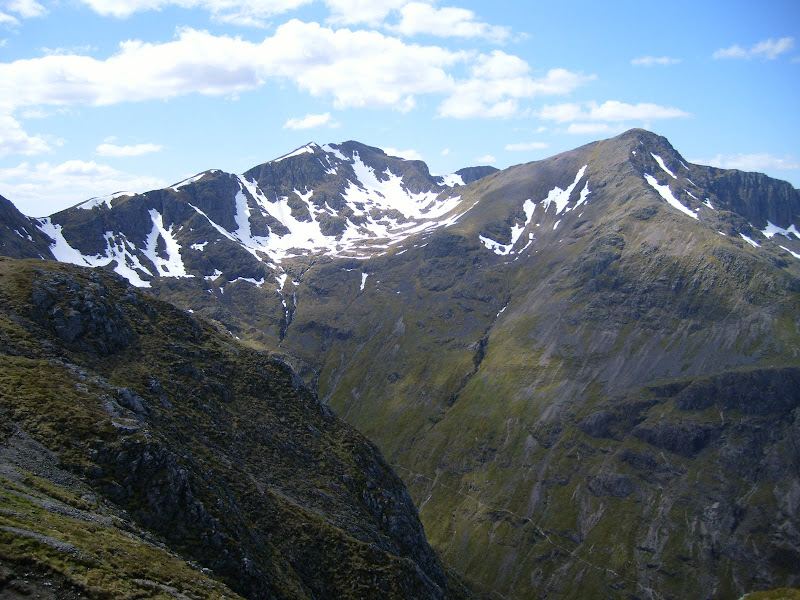 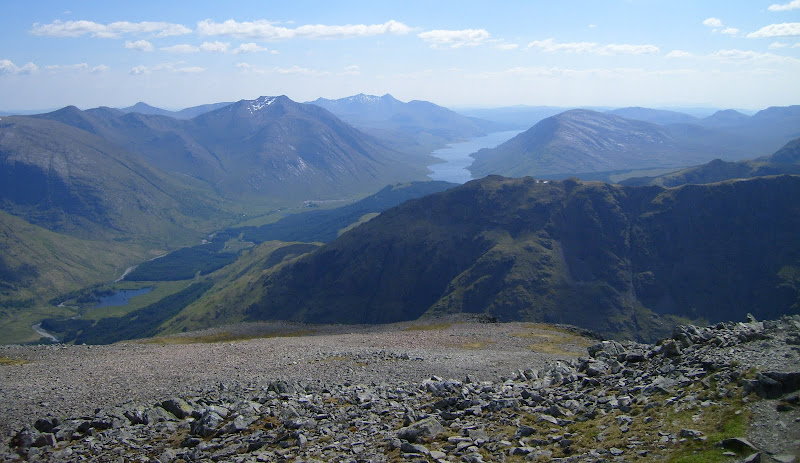 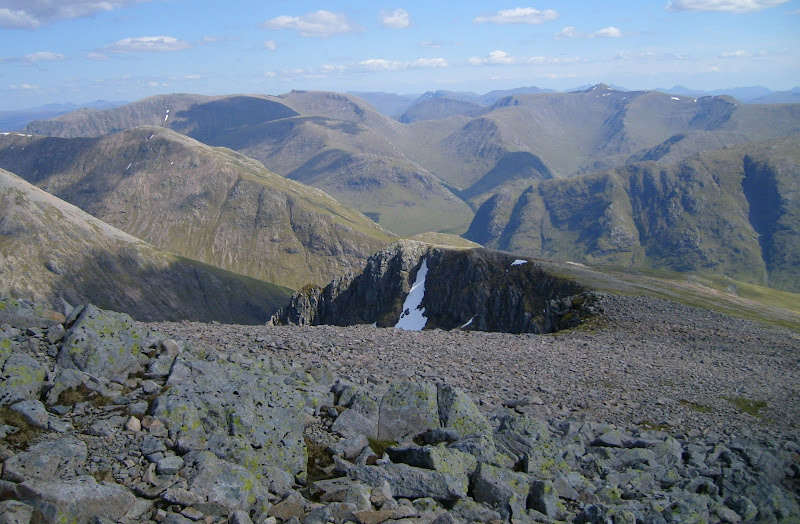 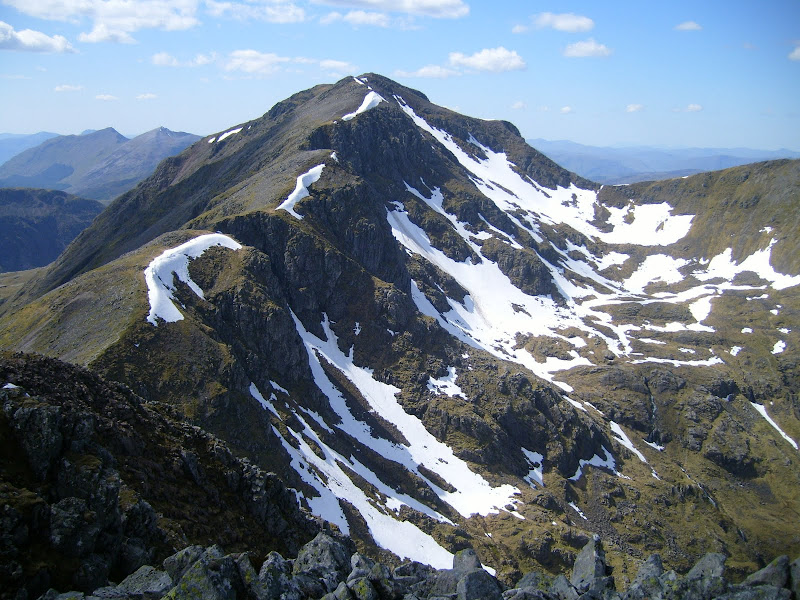 Stob Coire nan Lochan, and across the Aonach Eagach to the Ben: 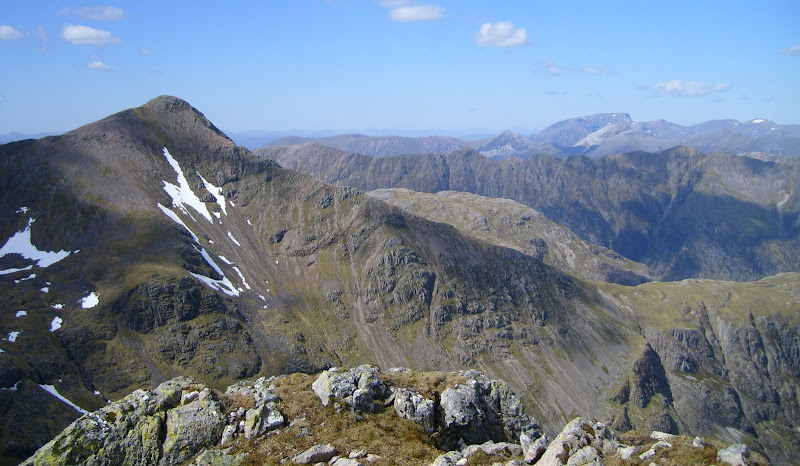 Then the usual route onto Bidean. Plenty of people about, most using the horrible scrabble up the back of Coire Gabhail. Sadly my camera batteries ran out shortly before the summit.

Up the SE ridge of Bidean: 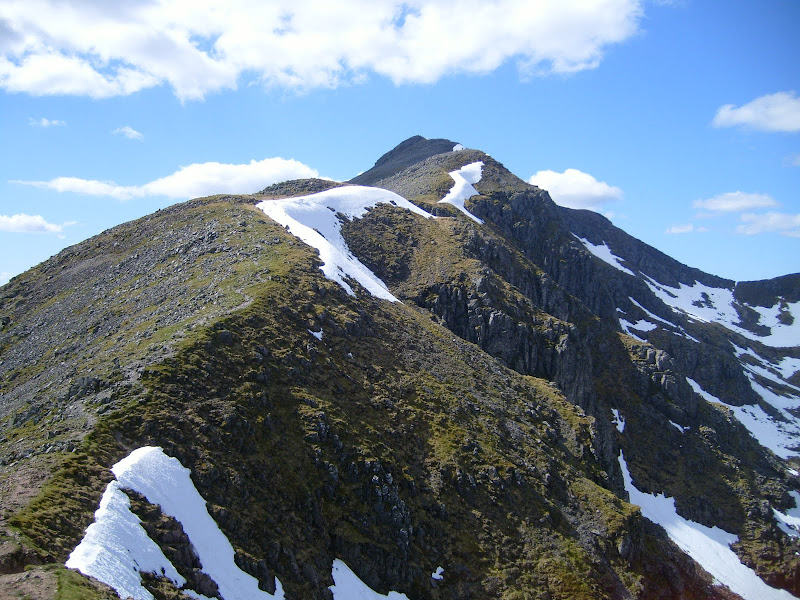 Down the Hidden Valley: 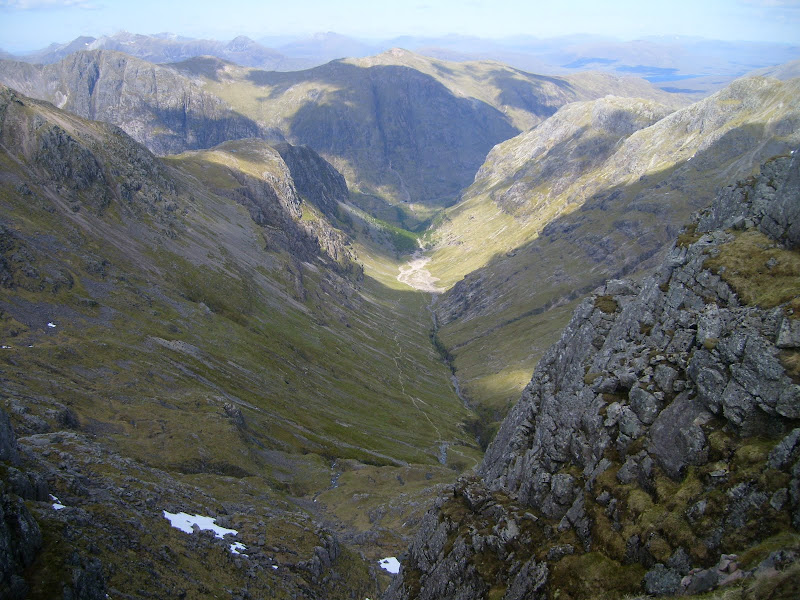 I was unsure of my descent route initially, but decided to loop back over Stob Coire nan Lochan to complete the horseshoe. The best descent from here is the N ridge, but I opted for the less defined E ridge, as I thought I might meet Dave and Julian on the top of Gearr Aonach. I didn't, but I had a nice break there before heading down the corrie. A phone call to Dave later that evening revealed that they hadn't managed the climb, as despite the low grade, the approach was across slimy, loose, mixed terrain which was more difficult than the climb itself! They admitted defeat and backed off, heading home early.

I drove home after this - great weekend re-visiting the haunts of my summer holidays while growing up.

You're turning the clock back now Malky, you're just trying to cheer us all up after the terrible weather we've been getting recently

Ahh .. so that's what Scotland looks like , I'd almost forgotten

Just cheers you up to see scenery like this again, roll on the spring and summer. Brilliant photos.

Cheers Malky - as one of the other guys says - So thats what it looks like!

Did Stob Ban in the murk, and almost had a 'navigational misplacement' by walking down the wrong ridge for a short way.

Thanks for excellent photos!

And if you are due back in Shifnal soon, the Severn is in flood.....

Thanks all - just providing a little break from the weather

clivegrif wrote:And if you are due back in Shifnal soon, the Severn is in flood.....

Going to cycle down to Ironbridge this evening to have a look...if I don't take off first!