The weather had been pretty bad, rain and wind, The Open had to be delayed 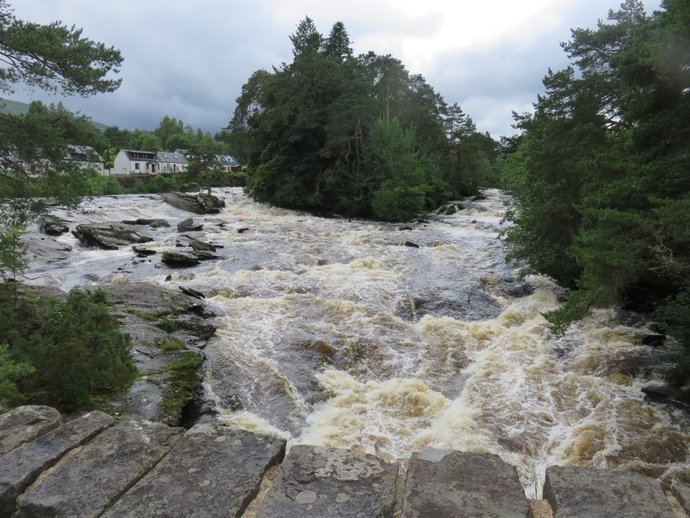 Found the turn off up Glen Lochay, a very narrow but well surfaced tarmac road. Passed a campsite, a very busy one

Spotted what I thought was the parking area, certainly thats where the WH gpx said it should be, but I'm not parking the car too far off the tarmac here

it's soaking. Drove further up and probably should have parked at another area where there is indeed room for a few cars to park safely. Carried on a bit further, would I bottle it

it is getting late. Found a place to turn round and headed back only to be stopped by a very angry common sandpiper screaming at me from the middle of the road 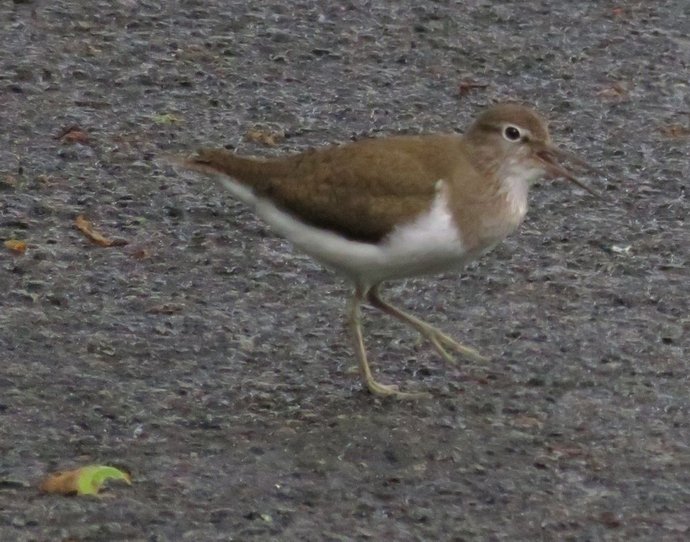 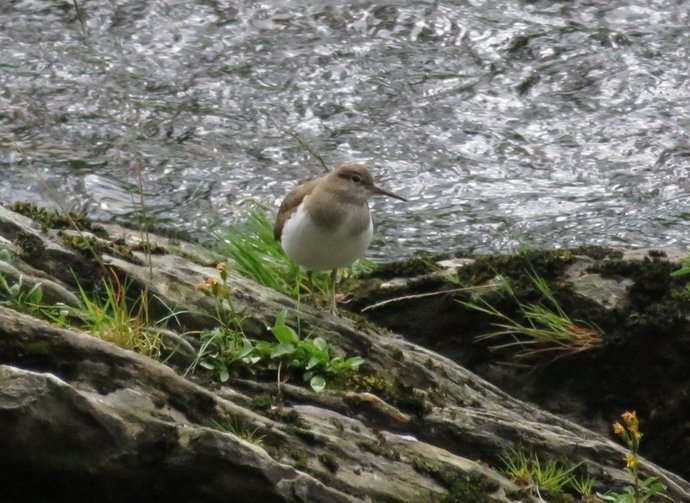 Got back to where the car was supposed to be parked and after reassuring myself that the actual ground the wheels would be resting on was firm, parked and got my gear on and set off through the gate, over the burn (more of that later) and across the field towards the very old ash trees 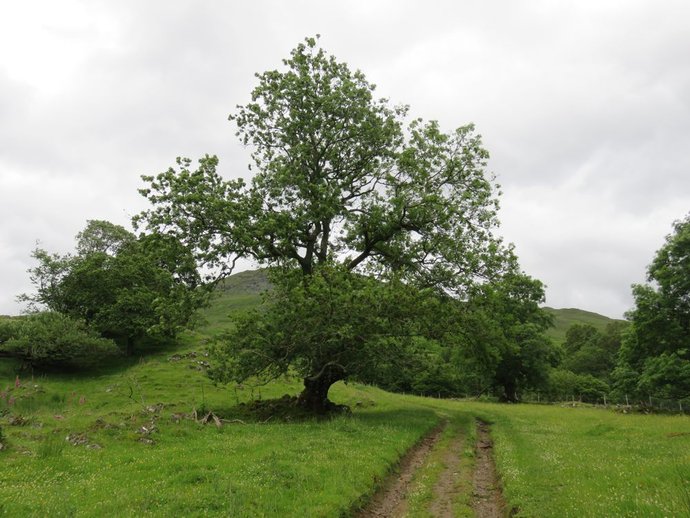 There are a number of large and I assume very old ash trees. To be honest I'm not expert enough to say whether these are Rowans, sometimes referred to as "Mountain Ash" or actually ash trees

If they are Rowans then they are big 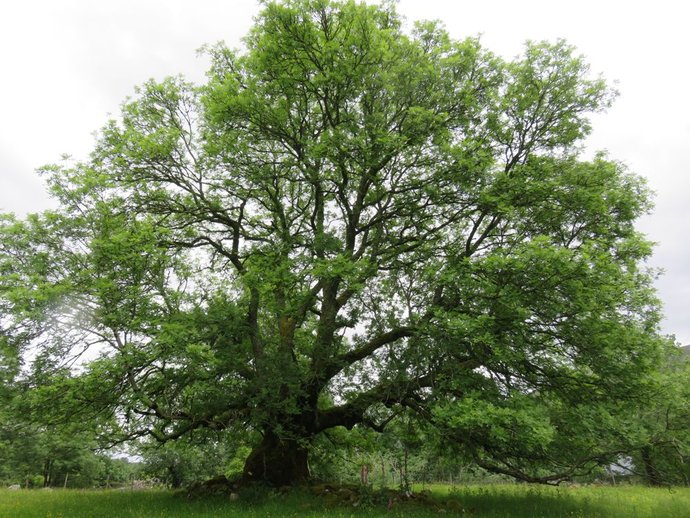 Probably taking a look at the photo on this page of a matture Rowan these are ash
https://en.wikipedia.org/wiki/Rowan The view looking back from over the wall 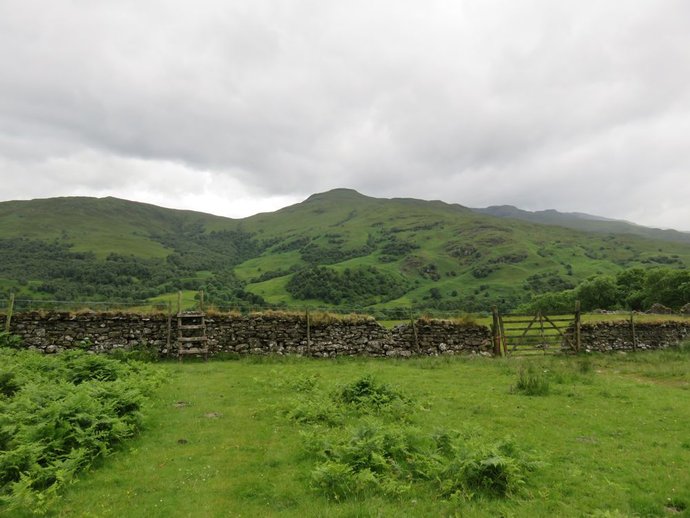 From here the landrover track is surrounded by a fern forest. Got to the cairn which marks departure onto the footpath. I tried to delude myself into believing that the good landrover track was the way forward 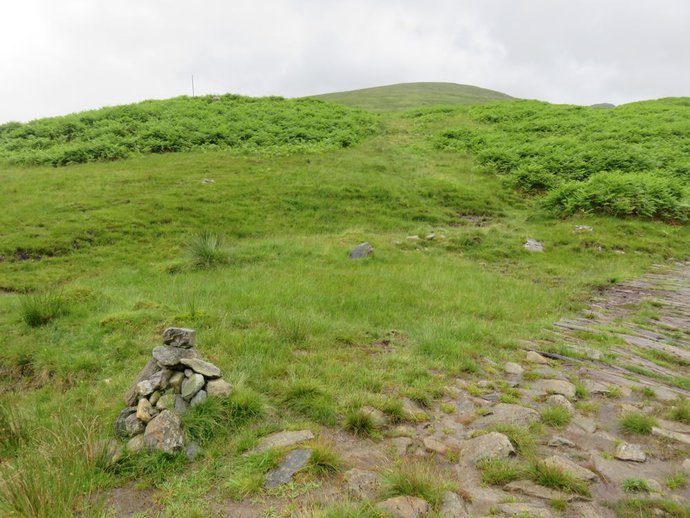 before turning back. Took a few photos of the mini Corie which seems to be the start of the Allt na h-lolair before heading up and across this small trickle. By the time I got back here it would be a torrent 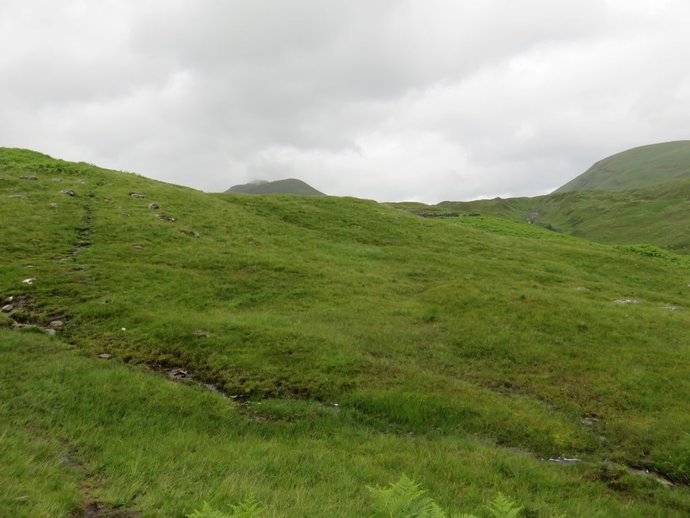 To be honest so far I couldn't believe the boggy reputation this walk had received in other reports, though my perception would change 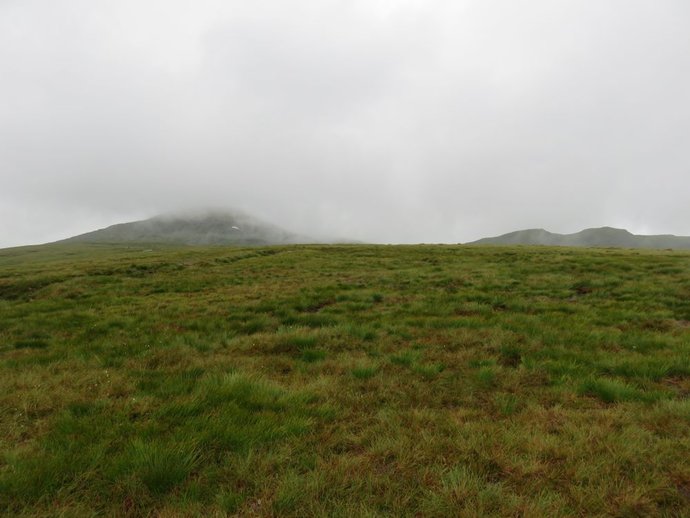 delightfully embellished with some clag

The flattish next section is a bog trot over peat hag, I had put on my gaiters and so far my boots were dry.

Shortly afterwards the rain became persistent and with driving wind. The complete opposite of what the forecast had led me to expect. It's a pity as the surrounding landscape isn't without interest and I was hoping to be able to look across to the Meall nan Tarmachan ridge which I'd done previously. Guess this was the best I could hope for 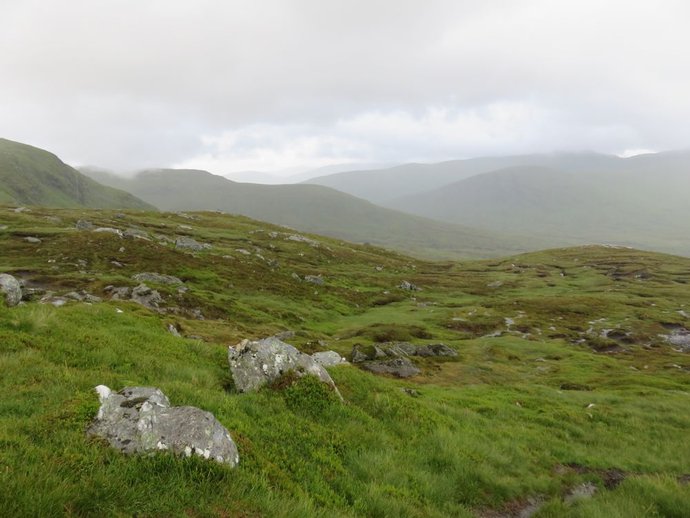 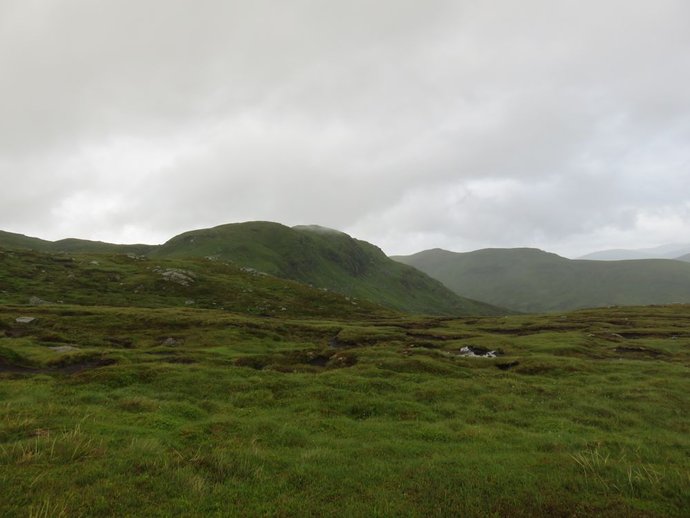 The rain and wind got more severe and I stopped to put on gloves and shelter for a few minutes to see if it would ease, a tell tail spot on the camera lens 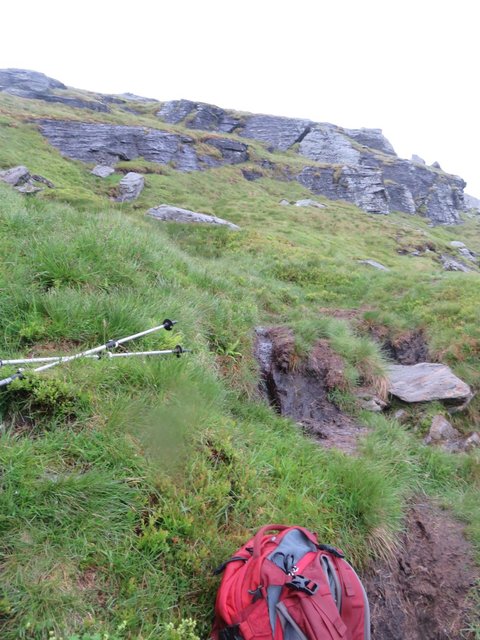 Quite an interesting path though on the way up, with several slab sections and other sections of broken up smaller slabs.
Got to the top and took a couple of photos.
From the shelter cairn with a trig point in the middle and of the cairn, had to be downwind to avoid rains spots on the lens and even though I was quick and didn't get it in focus 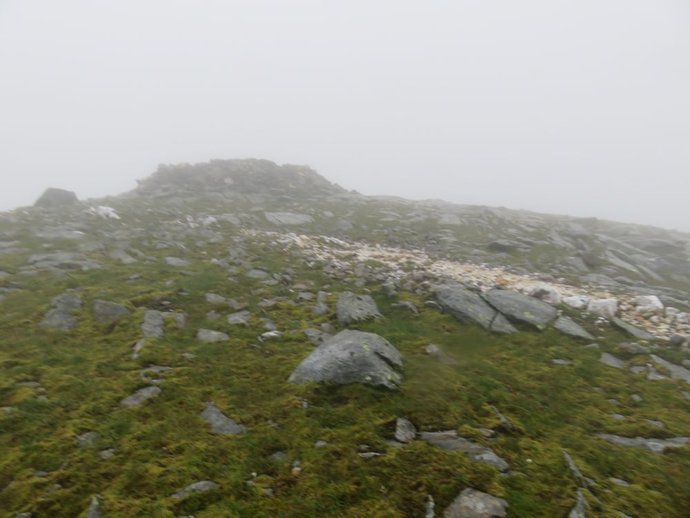 Such a shame as I'd have enjoyed inspecting the streak of white quartz that forms part of the path and I'm sure the views of the surrounding Glens are fabulous.
Not much point in hanging around up here, it certainly was't a picnic opportunity

Off back down after eventually finding the path which is now running with fresh rainfall. I was very surprised at the quick descent and I was soon at the small trickle which was now a torrent just after the path branches off from the landrover track. Wish I'd taken a photo with the phone which is in an overboard bag. Wasn't thinking. I definitely wasn't going to take the good camera out of the warm dry pocket to subject it to a rain soaking; after all I've just starting getting the hang of it after several months of failures

Just take it from me it's been raining persistently and heavily with obvious consequences.

Onto the landrover track and by now I had thought about the phone camera. A photo of the nice little mini Coire, not so clear now in the moisture laden air 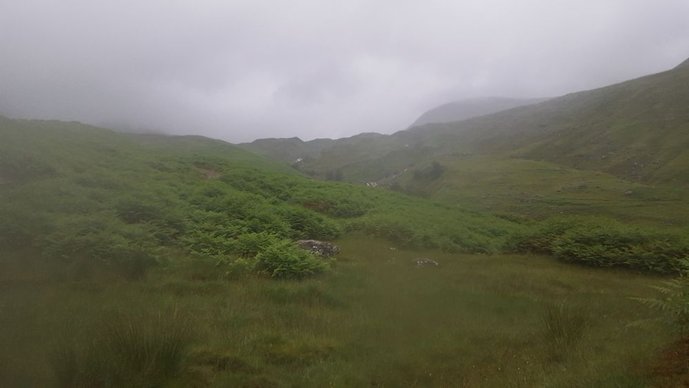 Interestingly despite the heavy rain and wind I was smiling and at times laughing on the way down. What interesting reactions we have to diversity

Got to the ford just before the ash trees and it is a different place now, but my boots are now wet and the car is close by so a walk though the now five inch deep water won't make much difference 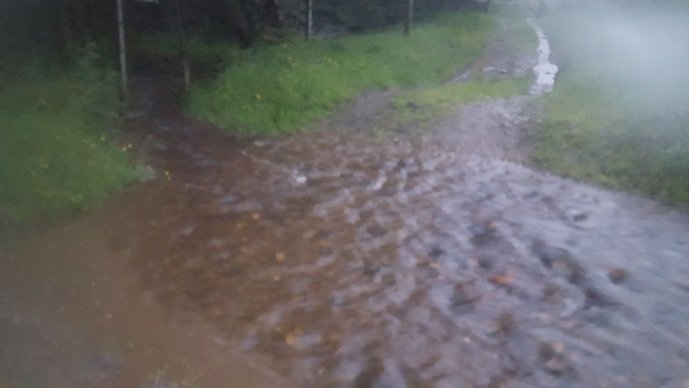 Back to the car and off with the wet gear and into jeans and t-shirt for the drive home.

Expect the falls at Killin are spectacular now, although it is dark and I won't see much. The burial ground of the Macnab's is on a piece of ground just down river from the bridge at Killin. I doubt the Macnab ancestors will be getting much peace this night as the river crashes down deafeningly.

RTC wrote:Brave man heading out yesterday. The rain overnight in the Stirling area had been horrendous. Well done on ticking off a Munro.

Thanks RTC, it was certainly a slow careful drive back down to Stirling

very heavy rain and lots of bits of trees blown onto the road.
As you say another one ticked off

One of the unsung Munros, perhaps, but a nice one, I reckon. Well done for carrying on in that weather, ancancha. The Falls of Dochart do look spectacular after rain, which gives some compensation for a wet day in Killin.

simon-b wrote:One of the unsung Munros, perhaps, but a nice one, I reckon. Well done for carrying on in that weather, ancancha. The Falls of Dochart do look spectacular after rain, which gives some compensation for a wet day in Killin.

Thanks Simon
Very much missed out on the views and being able to investigate the rocks due to the weather, not been a great summer so far. The falls are spectacular and expect after more rain during the weekend even more dramatic.