It seems that one of my favourite pastimes when not out on the hills has become remembering great days out from the past and writing them up here. A sure sign that I'm avoiding more important issues! This one was almost 3 years ago now. I had this route in mind for the weekend, then my mate Dave R phoned me up just before I left asking if I fancied going for a walk. Funnily enough, he also had Sgurr na Feartaig in mind, although a different route. We had both done the two Munros previously, but it wasn't hard to convince him that they made a great winter traverse, so we went for the trio, throwing bikes into the car to speed up the approach.

We parked up in the forestry carpark at Craig and began cycling at about 10. As usual, Dave managed to make me feel extremely unfit by charging off up the track. I took some photos - a great excuse for my relative slowness! 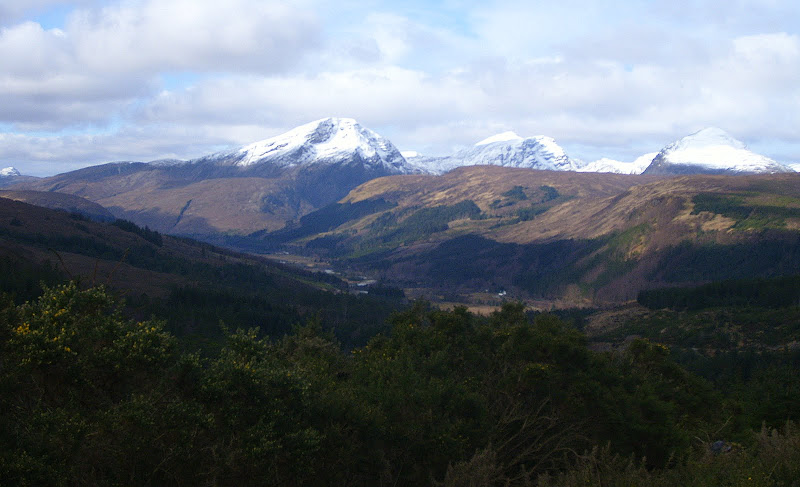 On the cycle in from Craig. Creag an Ardaich of Sgurr nan Ceannaichean looms above: 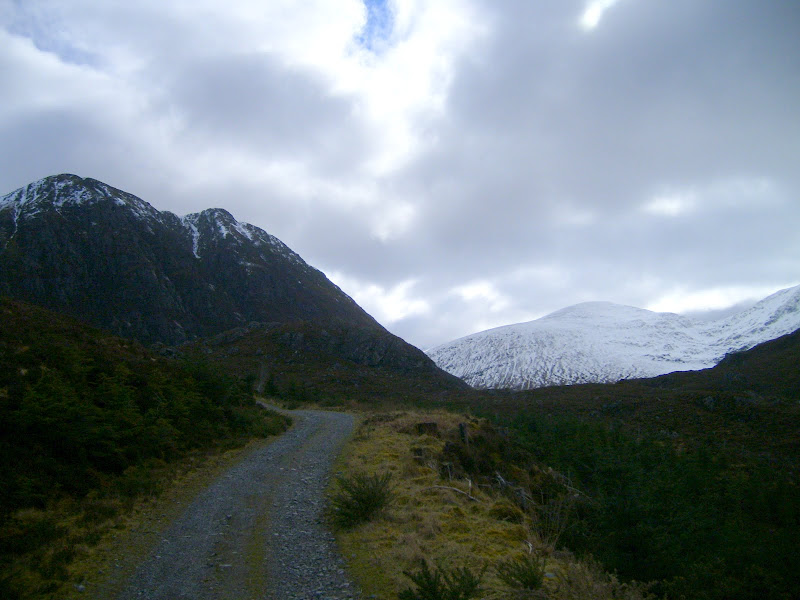 We abandoned the bikes at the bridge to the stalker's path up Sgurr na Feartaig, and started walking. The path was well drained and a pleasure to walk, although it disappeared under snow drifts higher up. No matter, as the snow was not overly soft. On the summit, the west ridge of the hill snaked temptingly towards Skye. That had been Dave's original route choice, and it's definitely one I'd go back for. As it was, we had a pretty impressive panorama of the hills which fill up the massive wild area occupied by Lochs Monar and Mullardoch. Our next hills looked pretty steep from here.

Looking W along Sgurr nan Feartaig towards the Cuillin: 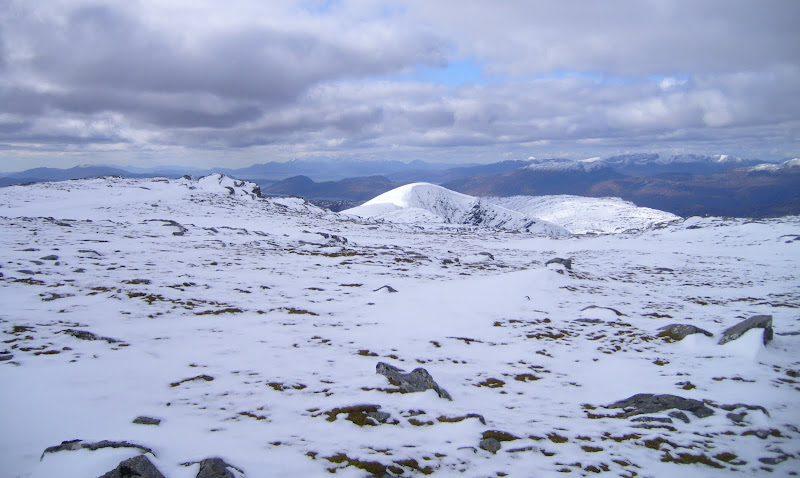 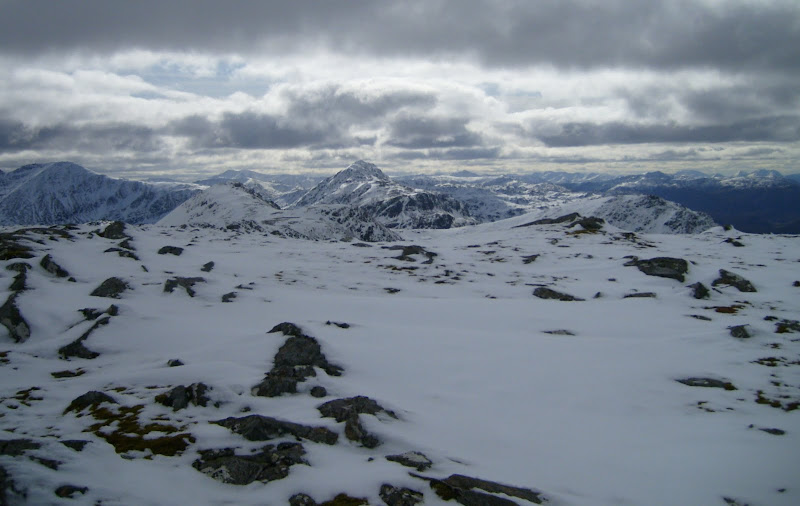 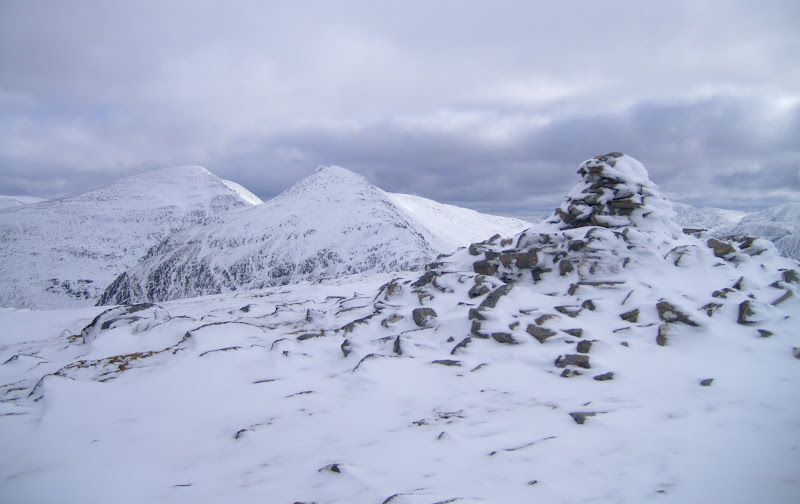 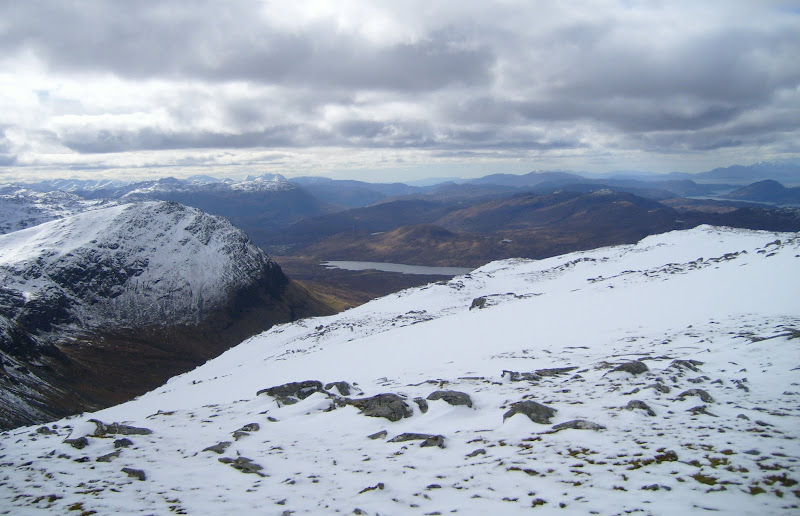 The descent to Bealach Bhearnais was steep, and lower down the snow was very wet. It was a bit of a boggy, melty-snow squelch across the Bealach (which we hit slightly lower than the highpoint) onto the west ridge of Sgurr Choinnich. It certainly was steep, with hands required once or twice, but nothing awkward. 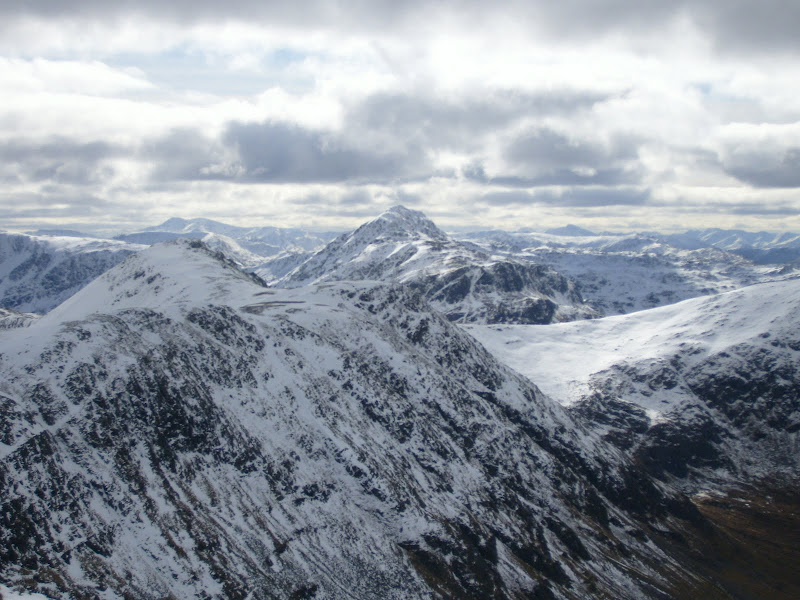 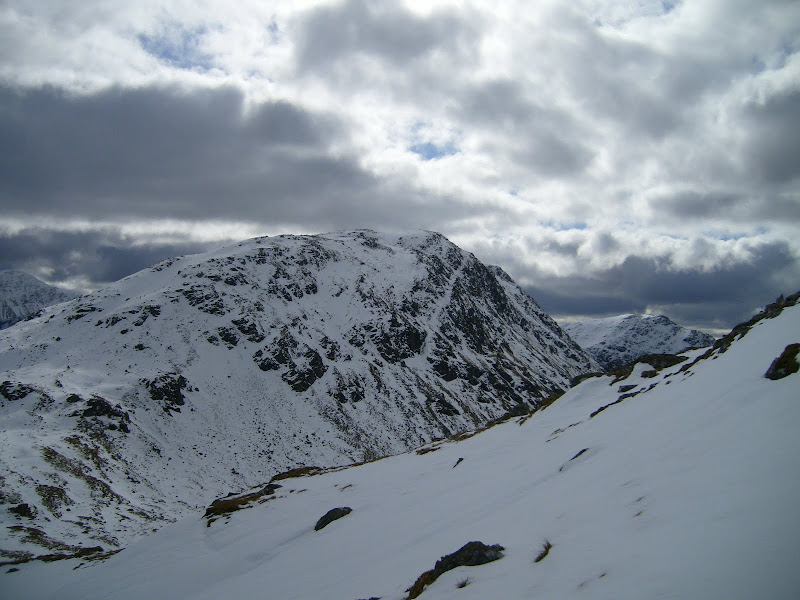 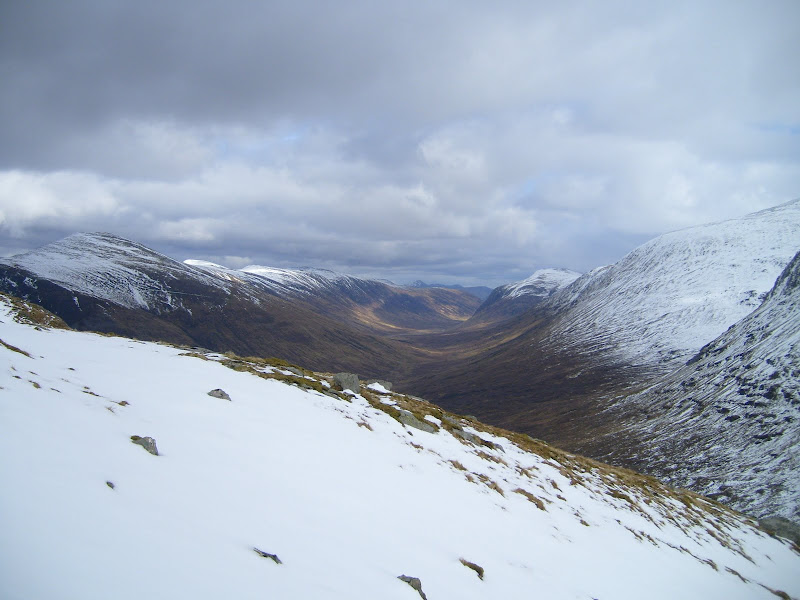 Soon nearly all the height was gained and there was a short horizontal section to the summit. This was one of the best bits of the day, as it had the look of being quite exposed, but was nothing more than an easy stroll. Although the snow wasn't particuarly soft, there was no need to get the crampons out.

Dave on the summit ridge of Sgurr Choinnich: 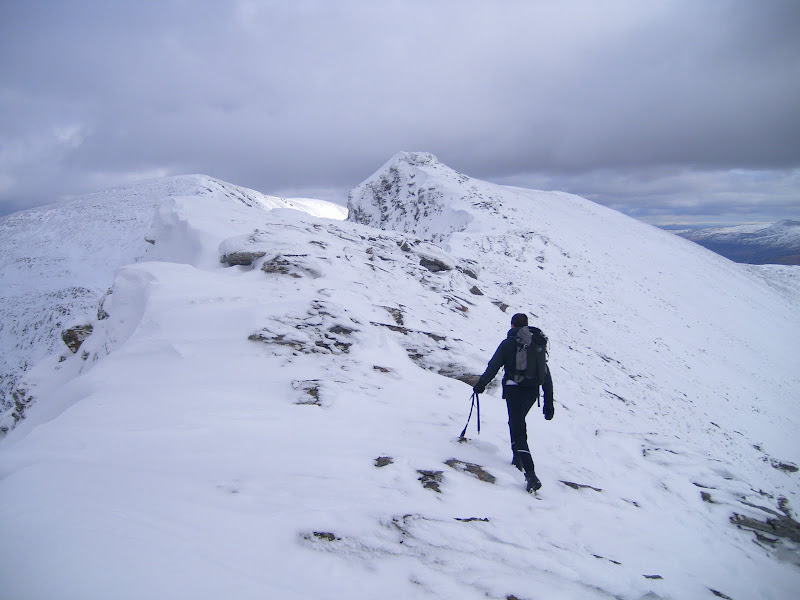 Back down to the approach route along the Allt a' Chaonais (Sgurr nan Ceannaichean on the right): 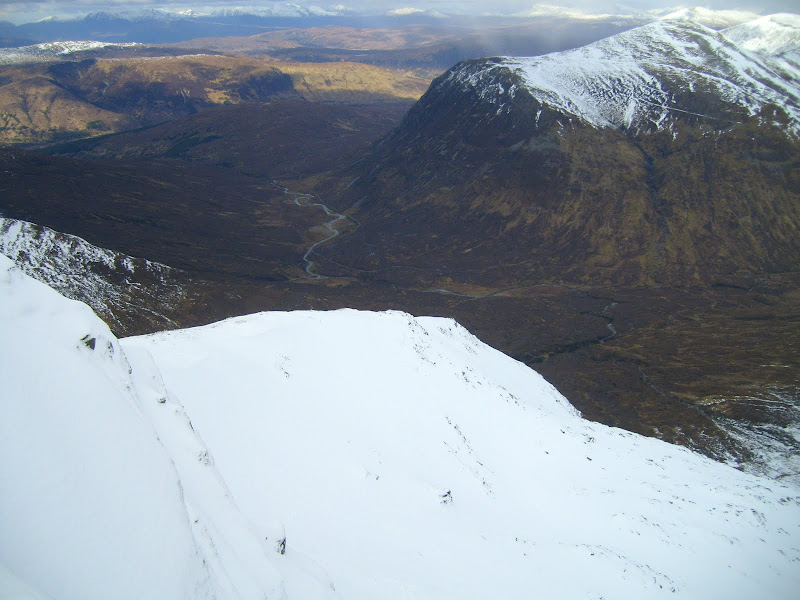 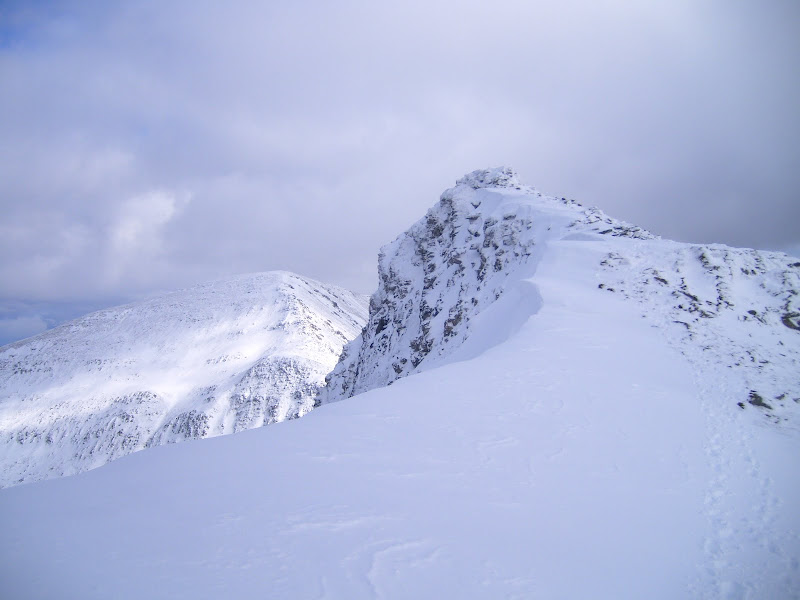 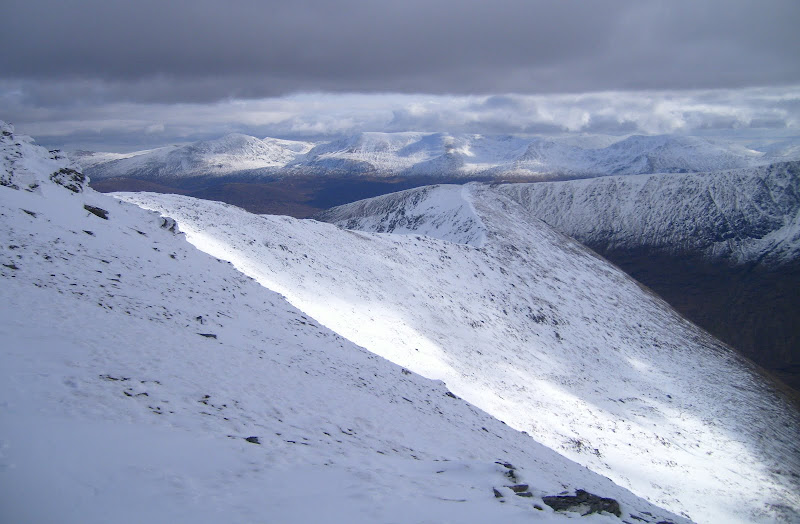 Looking back west along the summit ridge of Sgurr Choinnich: 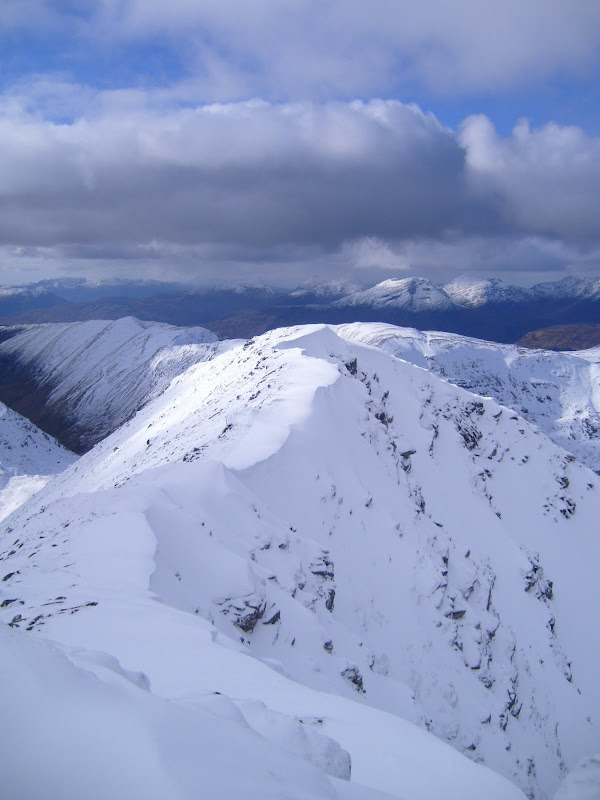 Back to the summit: 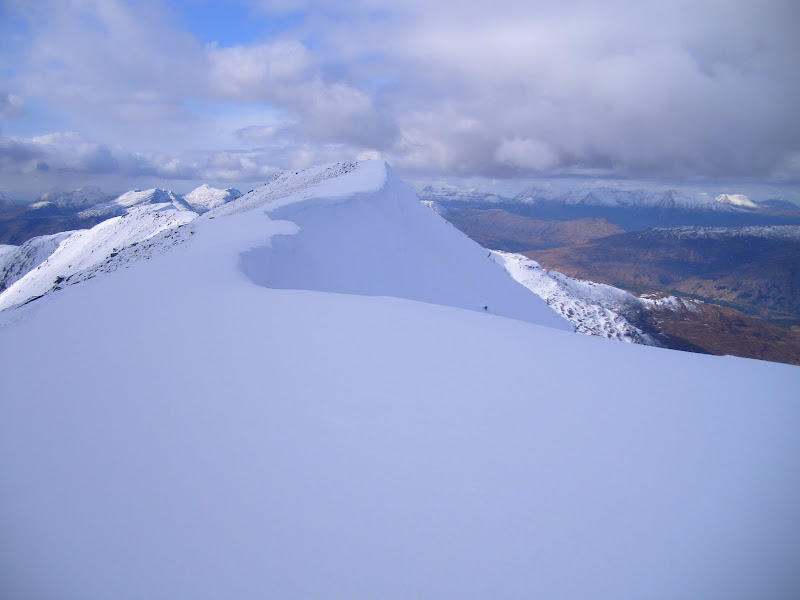 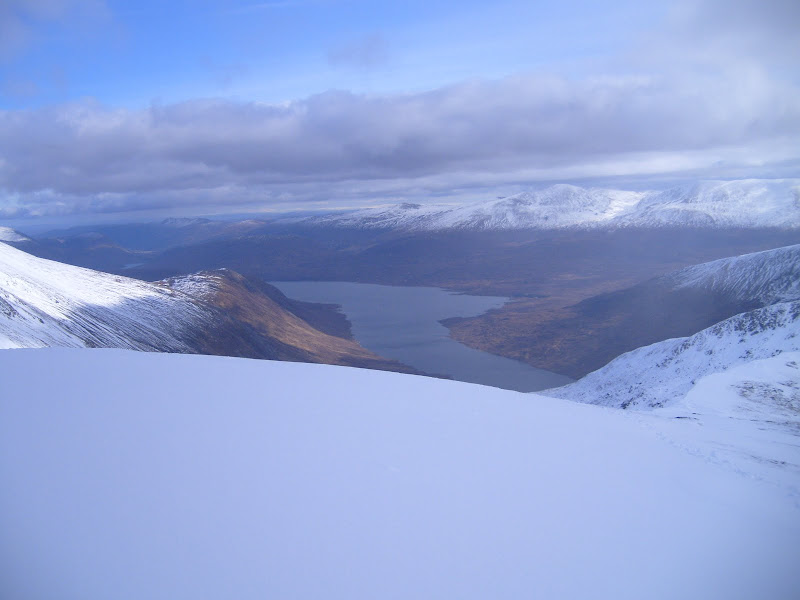 While planning the route, I had though of taking in the southern summit of Sgurr na Conbhaire, as it looked interesting, situated right above Loch Monar. In the end, we opted to have a more relaxed day on the main summits, rather than rushing around all the outlying bumps.

Finding the top of the east ridge was slightly unnerving, as it was quite steep, and the wind had helped form a continuation of the cornice over the top few meters. Once we were certain we weren't over a cliff, we smashed through this and onto the ridge, where the rest of the descent was uneventful. 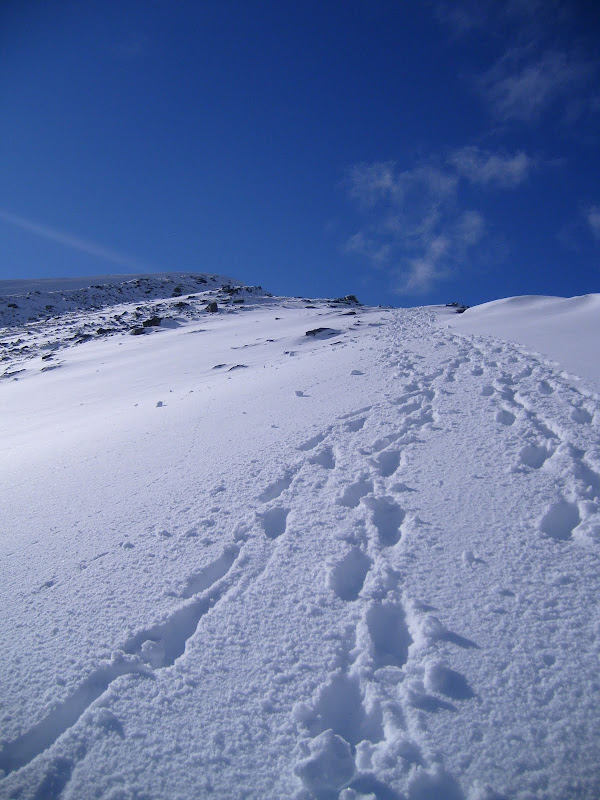 Next stop Sgurr a' Chaorachain: 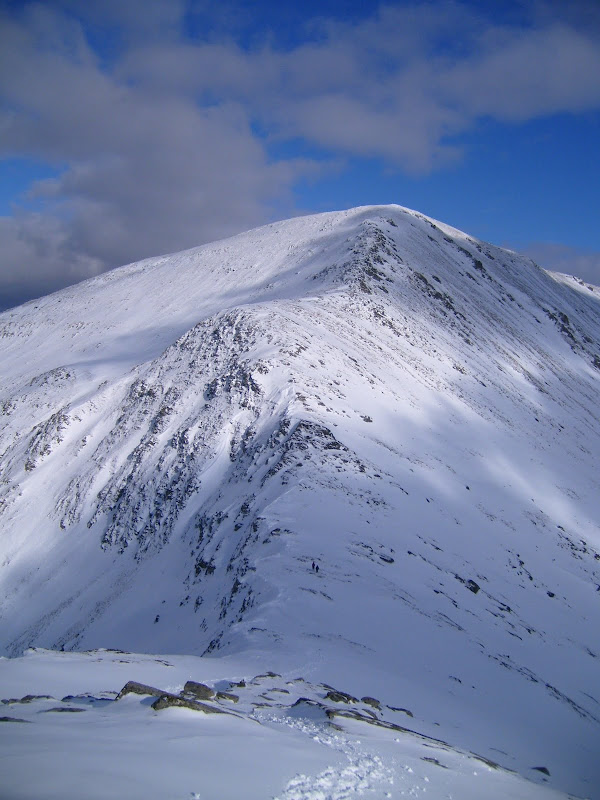 The best views of Sgurr Choinnich are from the ascent into Sgurr a' Chaorachain. Looking back from here makes me think what an underrated hill Choinnich is.

Looking back up the E ridge of Sgurr Choinnich: 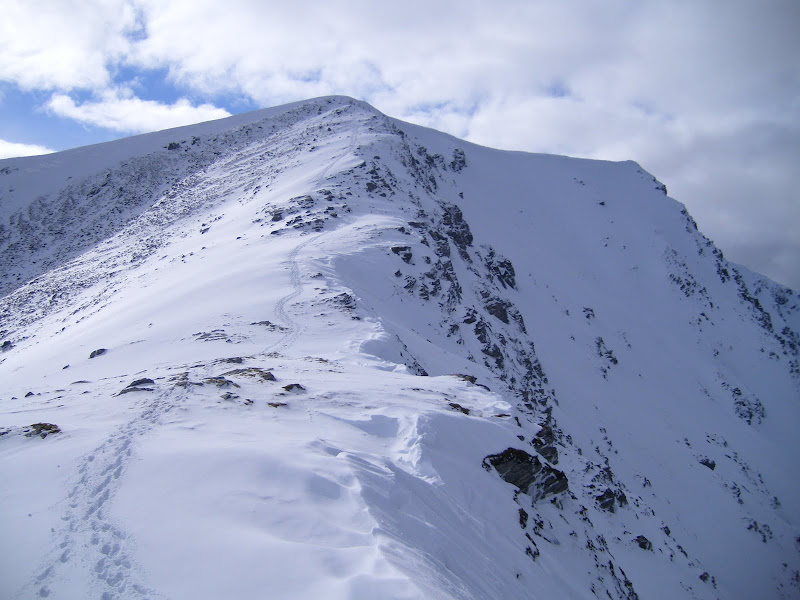 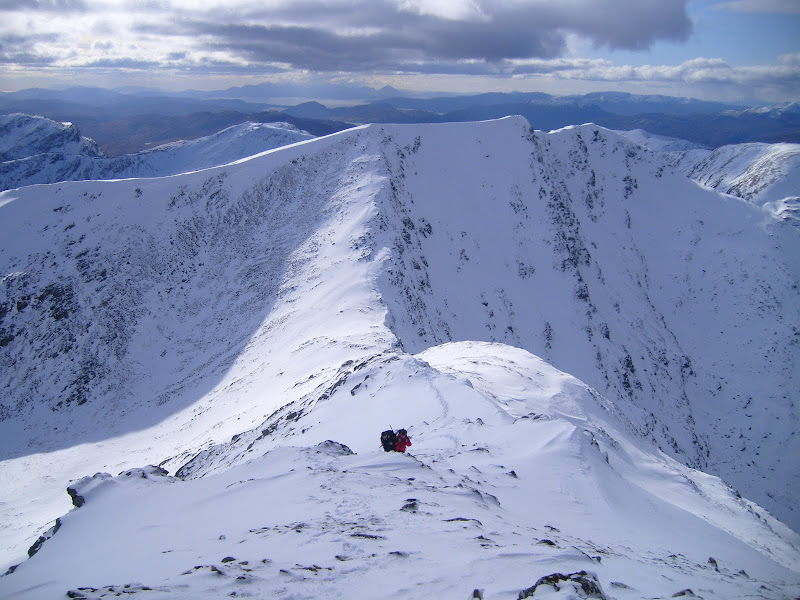 We caught up and passed the only other people we'd met that day on the final ascent. A couple of guys from Yorkshire who were working their way around the Munros in long weekend stints. They certainly got a cracker this weekend!

As time was pressing on, we opted for a descent of the N ridge of Chaorachain, yet again missing out Bidein an Eoin Dearg. Along with Meall Mor on the opposite side of Loch Monar, this is one of my most desired summits, ones which I really want to do regardless of whether I ever complete the Munro tops. An excuse for another return! 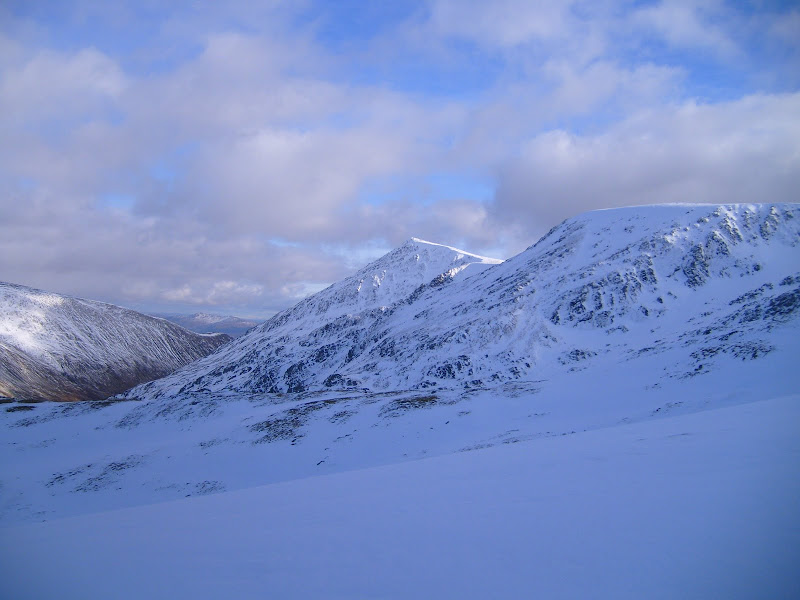 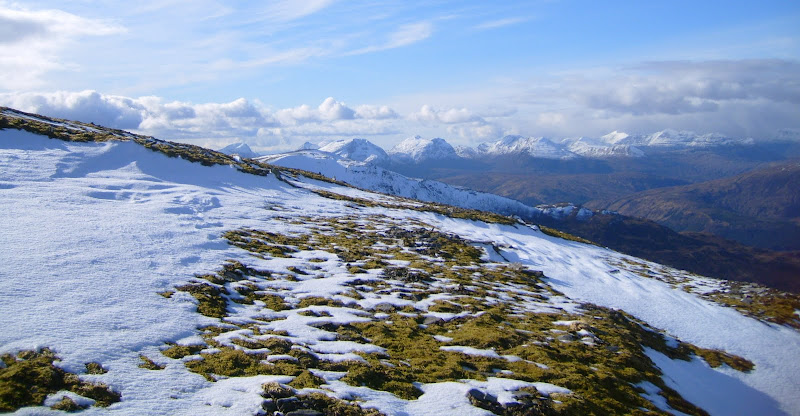 Descent was easy higher up, but got very steep as the rige merged into the rest of the hillside. Dave had been having boot problems throughout the day, which culminated on this section with him struggling to stay on his feet. New boots or at least some re-soling was in order as they had virtually no tread left.


Soon enough we were on the track for a relaxed walk back to the bikes. There were some nice views back to our accomplishments of the day, and I even managed to get close enough to some deer for a half decent shot. 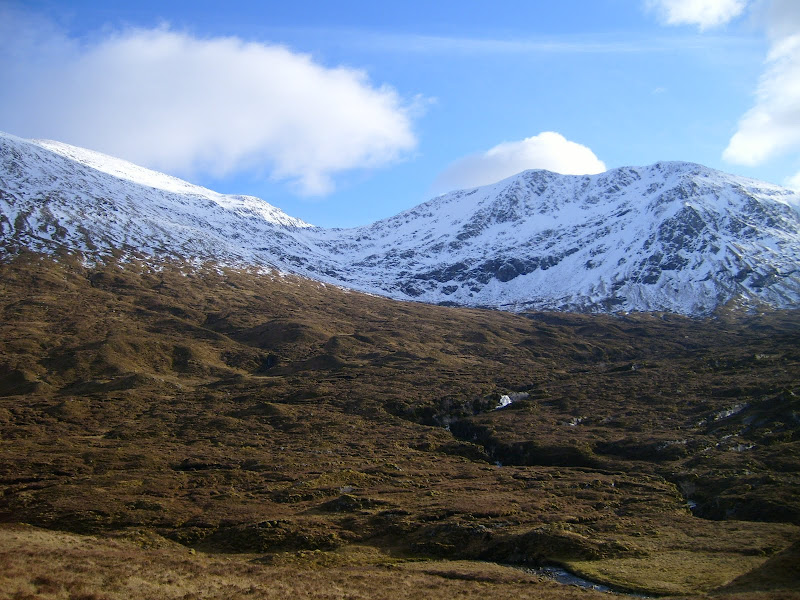 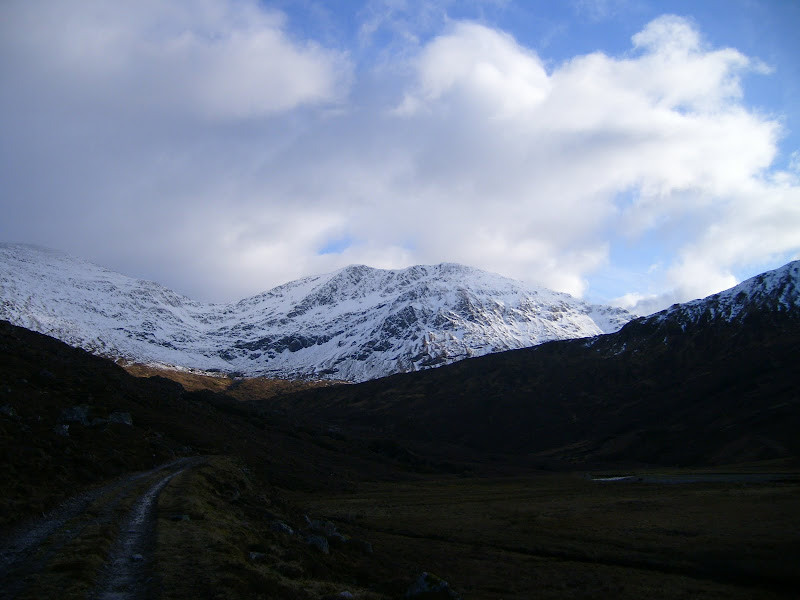 Don't usually get this close to the deer: 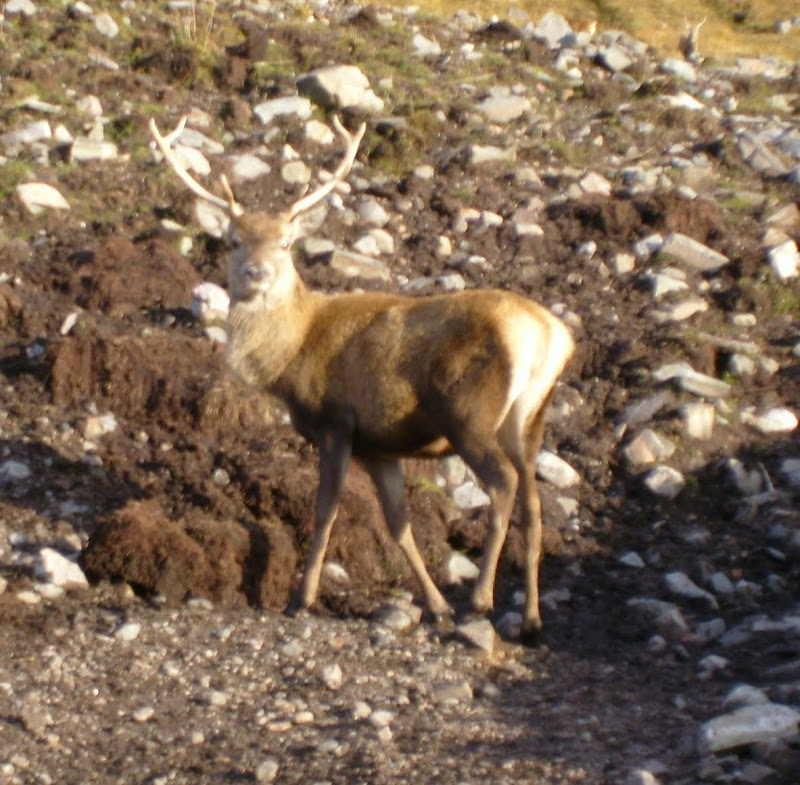 As with the cycle up the track, Dave was way faster than me on the way down (guy must have a death wish, as I wasn't hanging around!). Handily, my slower pace gave me a nice view of a rainbow, which he missed. 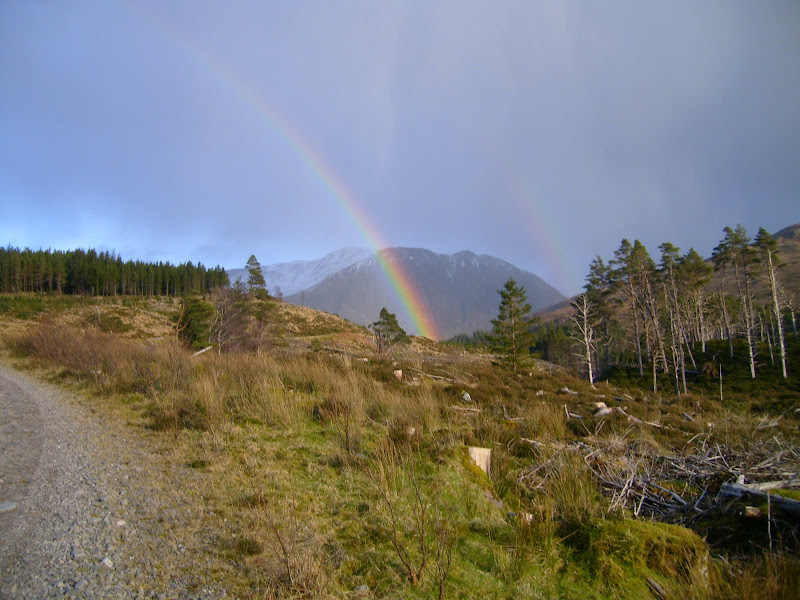 March is one of my favourite parts of winter, as it often has decent snow as well as loads of daylight. Today was no exception, as we were back well before dark, having not even started that early.

Remember you saying you might write this one up after our Sgurr na Feartaig walk last year.

I'm quite keen to revisit these munros at some point.

What a great day to be up the hills.

Them days stick with you

Drrrooooolllll....got to get to these this year. Looks like a great day out.

Great report and brilliant pictures - up to your usual standard!

I fear it wasn't like this when I was there - but shows exactly what the West Highlands can be like, absolutely brilliant.

WOW Malky that is an absolute stunner, it must have slipped off the board before I joined WH but I'm glad it came back on, what a fantastic day in the hills and what stunning photos. You must have been smiling for days after that one