Well this was the start of my two week holiday and Rudolph and I planned an epic trip. CWH was off to Uganda with a group from Church so giving us the opportunity to go beyond telephone contact for an entire week!
This trip has been in the planning stage for months - perhaps even years - involving food drops and bicycles - but in the end it was simplified by the extravagance of taking two cars justified (in our minds anyway) by me going on to Islay at the end while Rudolph had to go home.
We dropped one car at Kinlochhourn at the B&B, paid for parking and left a note of our plans with Tony at the B&B. Then we drove to the dam at the east end of Loch Quoich and left the car with a note to say don't come looking for us for a week till the 10th.
Having driven up from Yorkshire on a boiling hot day, it was about a quarter to 8 by the time we set off up the path to Gairich and still above 20 degrees. The midges were out a bit but once we got going we weren't bothered much. 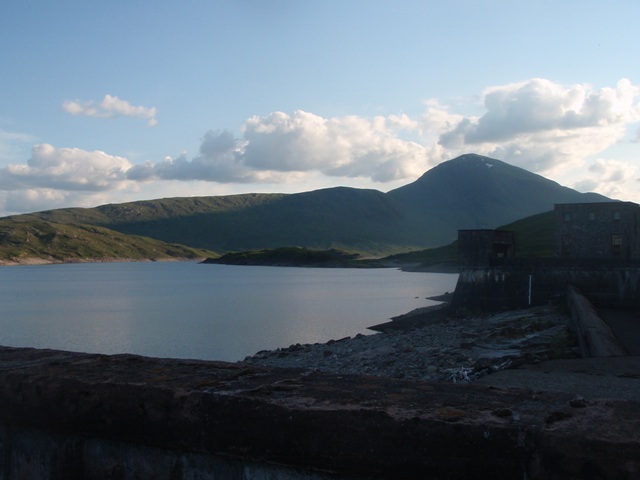 Looking up to Gairich from the dam 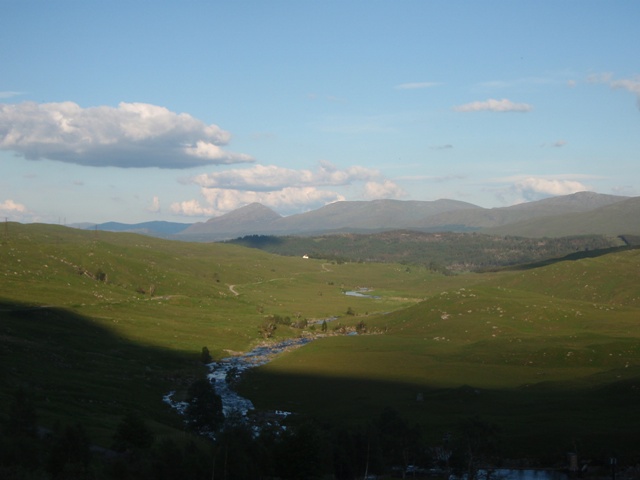 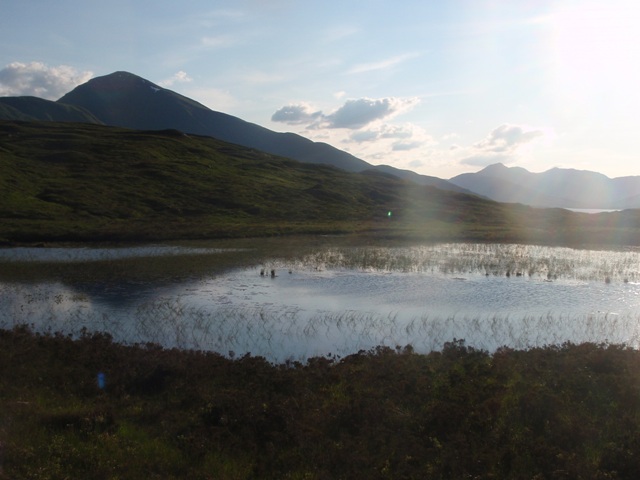 The edge of the loch 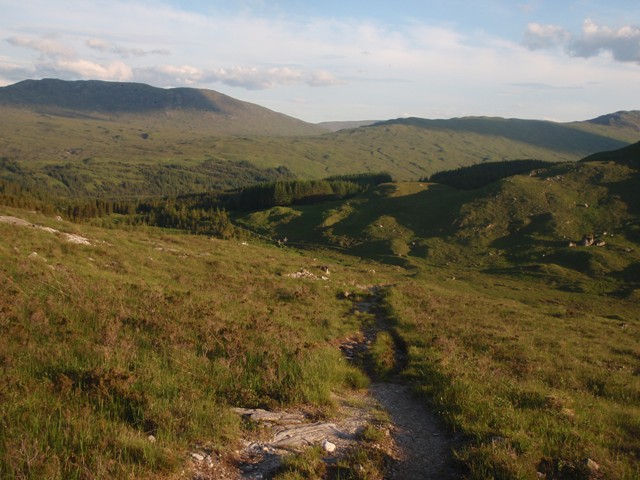 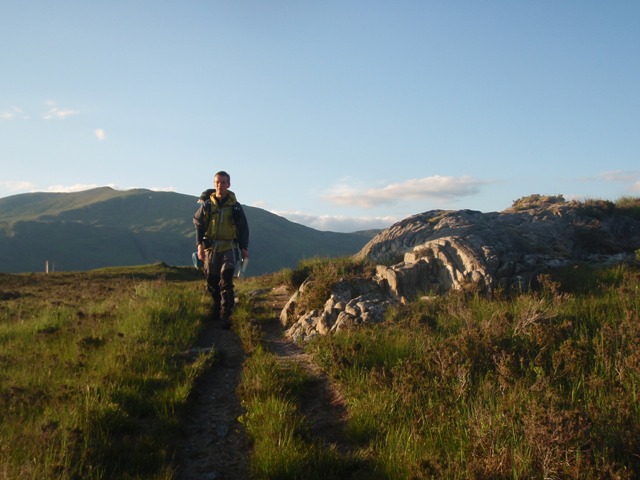 The path is not difficult to find and we followed the WH route up Gairich by a nice steady climb until the last bit which is a bit of a steep pull at bedtime! 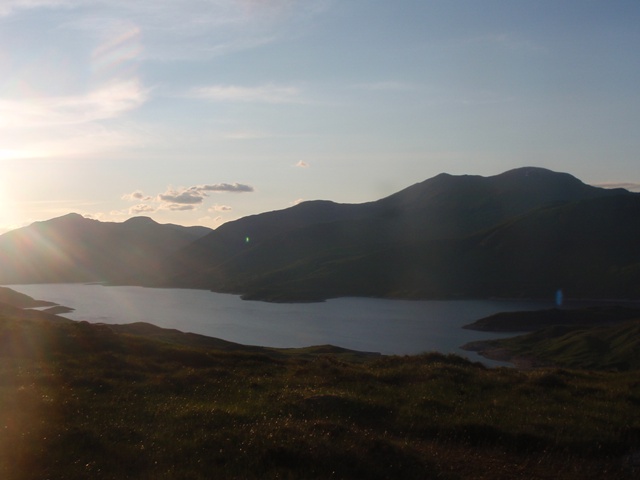 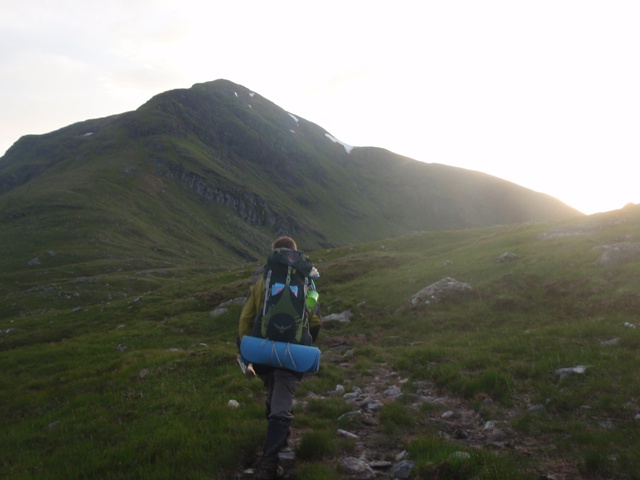 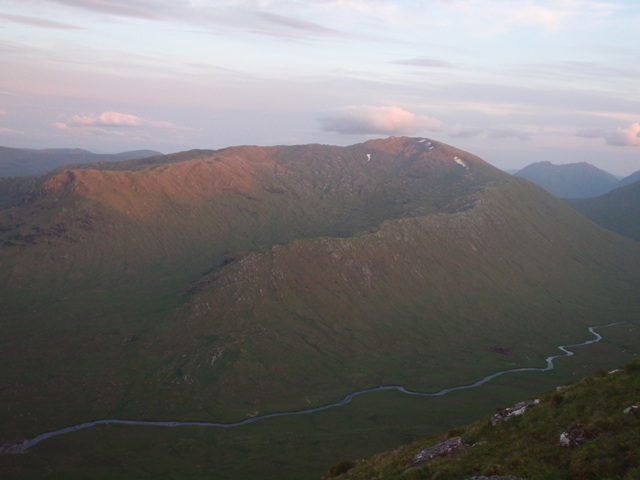 It was about half past ten when we hit the summit and we were treated to a lovely sunset. 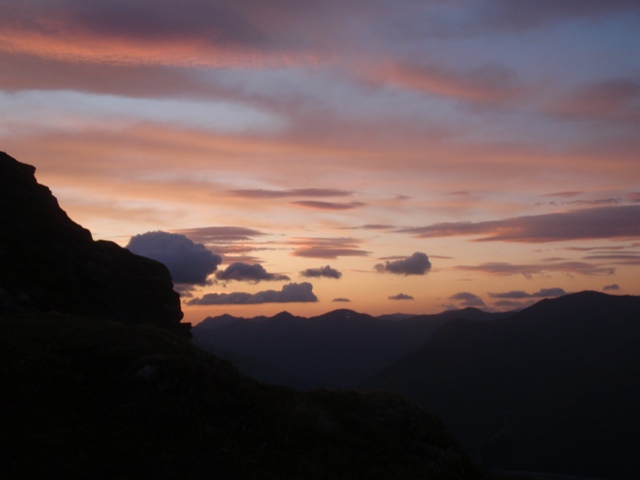 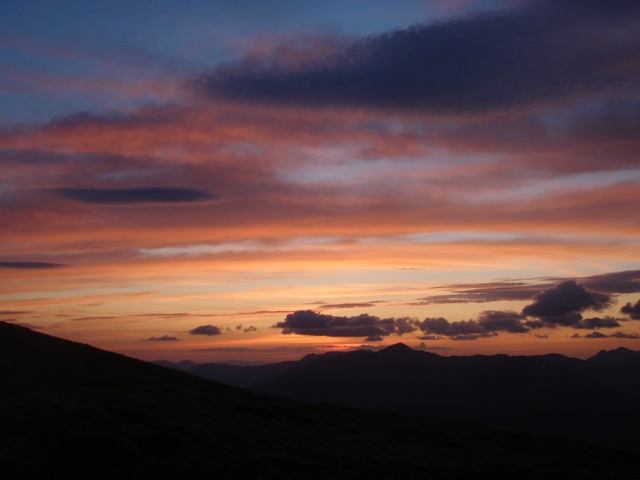 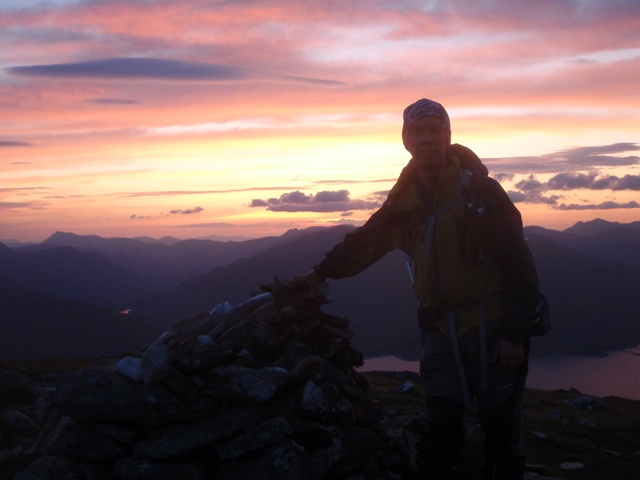 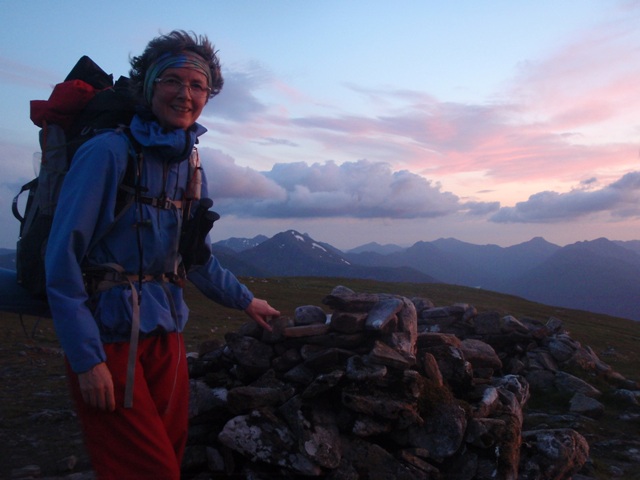 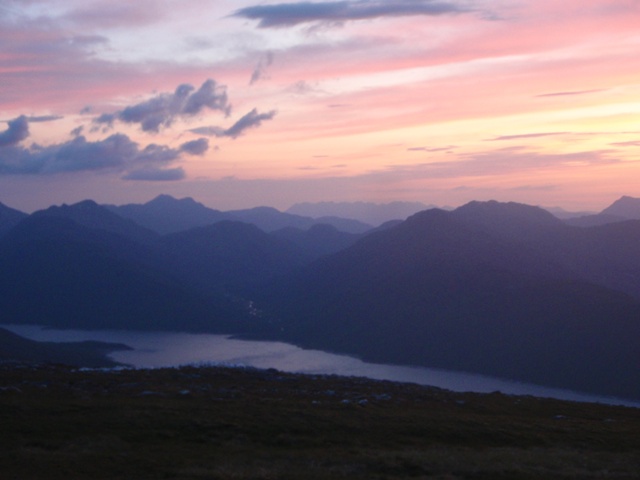 more sunset. Cuillin in the distance 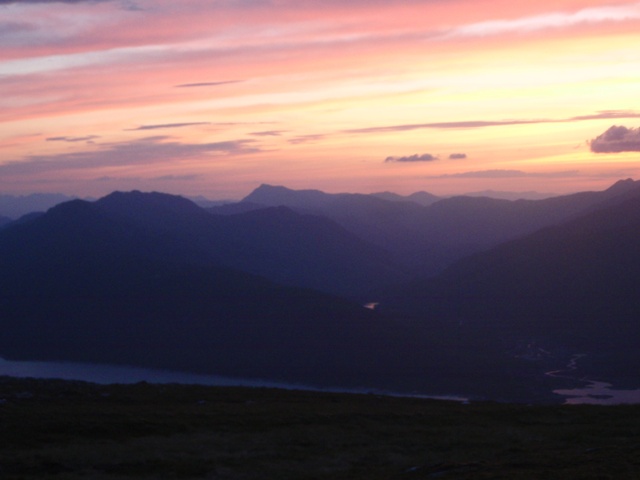 the Saddle in the bacground of this one I think 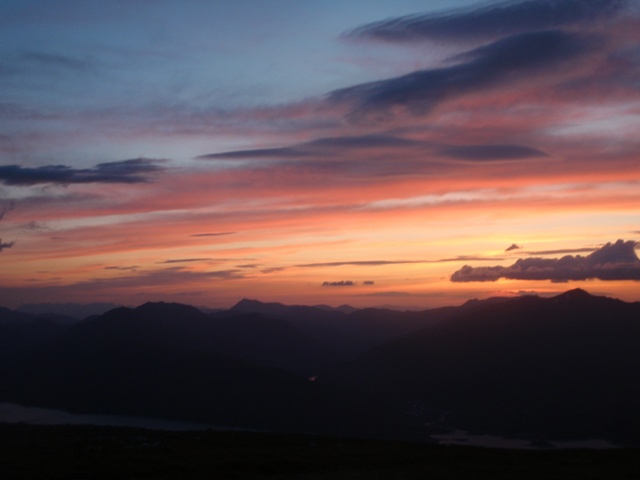 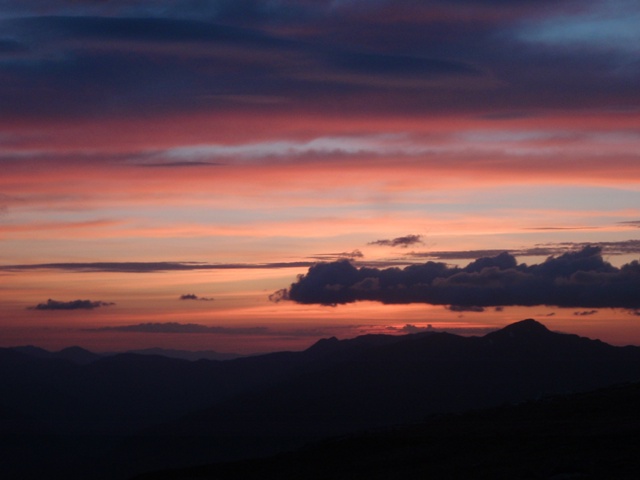 We came down the other side a bit till we found a good water supply and pitched the tent on a nice flat patch which was not too boggy. Bit of a breeze getting up but after we ate some quick food we were in bed by midnight and soon asleep.
But NOT FOR LONG!!
The wind gradually got up and by about half past three the tent poles were flexing so much they were bumping me on the head in the kind of way that makes sleep impossible. Rudolph went exploring to see if he could find a more sheltered spot as we were really not in a fit state to get up and start walking again.
Such a spot was discovered and it was getting towards sunrise, then we saw the most amazing red rainbow. I never would have thought of such a thing! 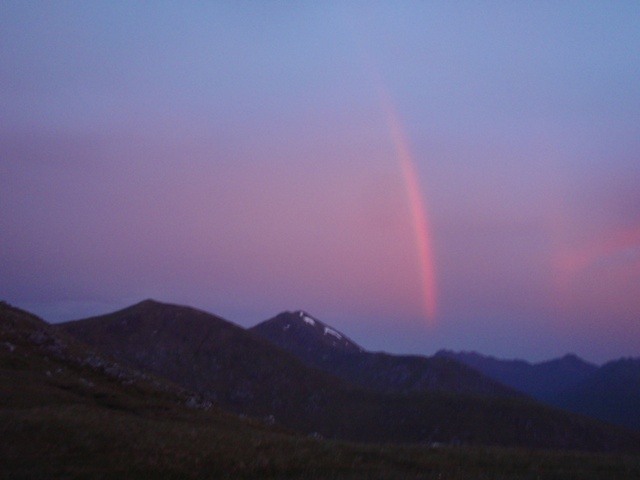 red rainbow at sunrise 4.30am 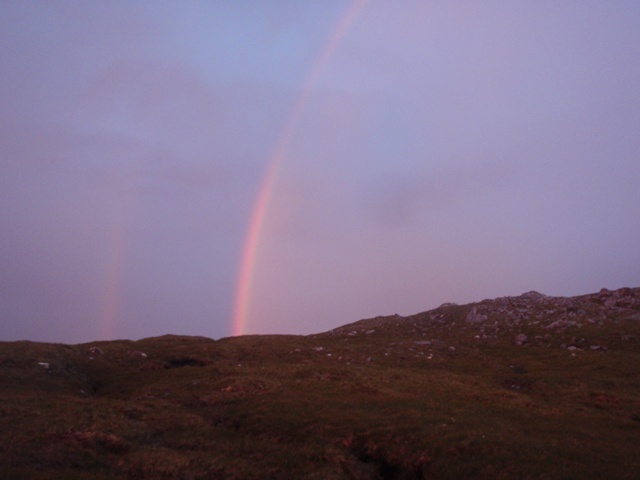 the other end of the rainbow

Of course with the rainbow came the start of rain, so we quickly stuffed our gear into the rucksacks, picked up the tent bodily and moved it to a better spot. It must have made quite a sight to any passing deer, us carrying a fully erected tent about 300metres across the rough and boggy ground, reminded me of the Chuckle Brothers (to me, to you).
We found a little flat patch behind a lump of rock and went back to bed, sleeping in till 9am. And it was evening and it was morning, and that was the first day!

day 1 Gairich 20150703.gpx Open full screen  NB: Walkhighlands is not responsible for the accuracy of gpx files in users posts
Here is the link to day 2 http://www.walkhighlands.co.uk/Forum/viewtopic.php?f=9&t=54326

Looks good so far with a fabulous sunset

What a great start to your holiday! Lovely sunset and that red rainbow

I’ve never seen such a thing (nor did I see a thing when I did Gairich). I’m looking forward to the next installment of your adventure.

Lovely start to your holidays,roll on your next TR.

Wow, the red rainbow was fantastic

can't beat a good sunset. one of the great things about camping I think.

Silverhill wrote:What a great start to your holiday! Lovely sunset and that red rainbow

I’ve never seen such a thing (nor did I see a thing when I did Gairich). I’m looking forward to the next installment of your adventure.

no it never would have occurred to me such a thing would exist - just because the light was red just before sunrise. makes sense really but still amazing!

gammy leg walker wrote:Lovely start to your holidays,roll on your next TR.

thanks, wasn't it just. Was worth being hit across the head by a tent for that!