Weather forecast looked good for today so had booked the day off a few days before. Turned out a lot more cloudy than forecast with a little unexpected rain early on.

Original plan was for an out and back for each of the corbetts. Then spotted malky’s report and realised there was a Graham in the middle so decided on the loop instead.


Innerwick 15jul2015 activelog.gpx Open full screen  NB: Walkhighlands is not responsible for the accuracy of gpx files in users posts
Set off early and parked in the car park at Innerwick. Along the road, past the memorial then off up the track northwards.

Uphill with Meall a’Mhuic to the left

Walked east until reached the summit

Cam Chreag in the distance

Then up to the summit

Debated heading NW towards Meall nan Sac then SW to pick up the north end of Cam Chreag's ridge. However, some recent foot pain which seemed to have cleared up sufficiently the previous night had flared up again - was having to walk by “flopping” my left foot down each step and trying to keep pressure of the big toe joint - must have looked rather odd. Did think about heading back as well but in the end decided just to keep going but by the more direct route.

Tin shed at the end of the landrover track

Various sections of water with tadpoles - seemed quite late for them ?

Steeply uphill then north along the flat ridge 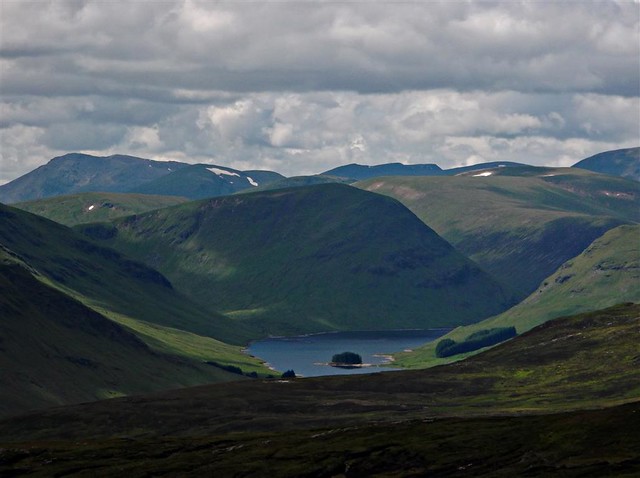 Stopped for some more food then off back down to find the track back to the car.

Met two separate couples of walkers on the return leg. Nice walk back to the car park which was a lot busier than when I left it earlier.

Always enjoy Glen Lyon , been a while and good to see some decent photos

Tadpoles late ? .... everything is about a month behind this so called "Summer" !

As for the tadpoles, well frogs are strange creatures.. The normal period for the common frog to reach metamorphosis, is 3 months, but the tadpoles that emerge earlier in the season, are bigger and somehow take up to 5 months to metamorphosise.. Then there are ones, that decide quite early in the season, that they are going to overwinter as a tadpole - maybe if it is overcrowded and they know they wont get enough food to develop. Its mindblowing and well worth a google!