One of the main objetives of this holday was Sgurr Mor and the Eastern Fannichs which we did on Sunday with Matthew and the Springers, the next main jaunt on the wishlist was Beinn Dearg the Four Munro Circuit. Monday and Tuesday both turned out miserable weather wise (I really wanted to do these on a clear day for one reason in particular) and, if the forecast for the Wednesday was to be believed, we should get the opportunity.

Wednesday dawned with the forecast spot on, broken cloud, sunshine, light winds but coolish, we can cope with that.
Got parked up in the walkers car park at Inverleal, just one other car there, we were off by 9.10 am, not bad.
There's two stiles by the phone box, one out of the car park and one over the fence by the gate leading onto the farm track. The start of the walk, the farm track.

From this point on the walk through the forest and then onto the open hillside all the way to the Famine Wall is easy going and very pleasant, At least you're reminded where you're going on the way through the forest.

Beinn Dearg and the cliffs become more and more dominant and the feeling of size is amazing. 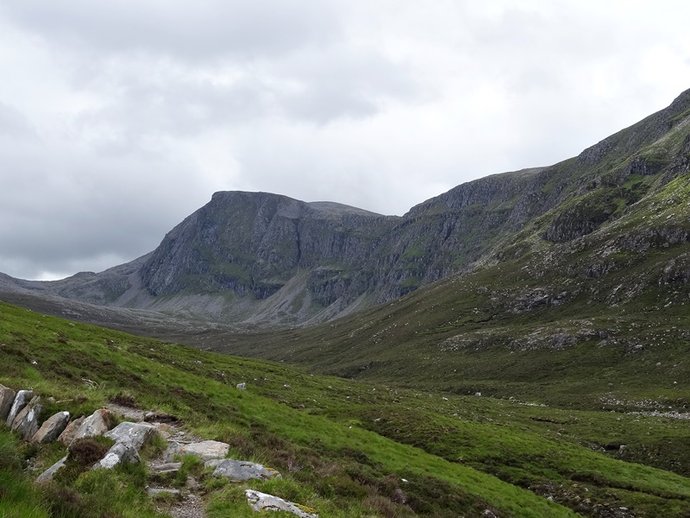 Beinn Dearg and the cliffs. Water feature on the way

On the way up the skies were filling in all around. By the time we'd reached the wall the rain had started in somewhat dramatic style the clouds were down and we couldn't see a thing looking up.

So it was a bit of a miserable trudge up to the summit of Beinn Dearg, at least the wall gave an easy handrail and on leaving it at the corner there's a good path through the scree to the summit. Beinn Dearg was special because it was Denise's 100th Munro and we wanted it to be a Munro of epic views, well, we got mist and rain, I suppose thats the default setting for Munro views. Denise at the cairn on Beinn Dearg, her 100th Munro, classic views.

After a quick discussion we agreed to go back down after Dearg not wanting to spend the next few hours in the wet but, luckily, that thought was short lived and it soon improved. On the way down to the Bealach from the summit the cloud started to lift and the sun was out again by the time we'd reached the lochans in the bealach so the decision was made to carry on. What a difference 15 mins makes, on the way back to the bealach this encouraged us to keep going.

Cona' Mheall was next, the walk over and up to the summit is quite pleasant, mostly dry underfoot and then bouldery up to the top. Beinn Dearg from the slopes of Cona' Meall. Views from just below the summit, The Fannichs. There's not much in the way of a path near the top but there is a cairn at the summit and judging by what's been said in past reports, it's grown in size. Panorama towards the mountains of Coigach and Assynt. 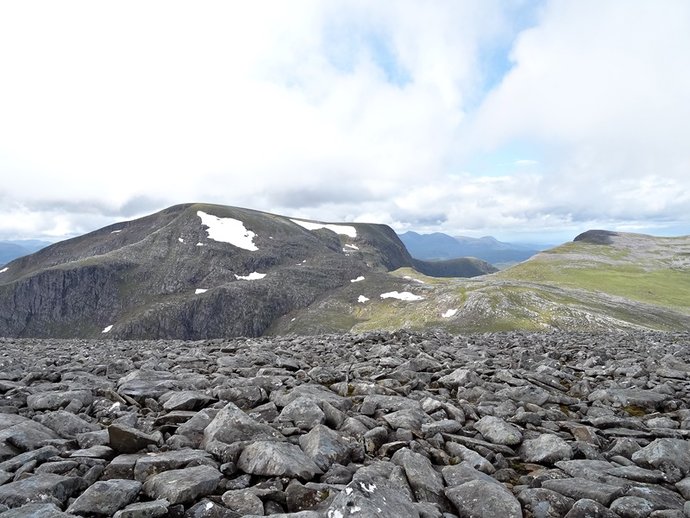 Re-tracing our way back to the wall for the last time Meall nan Ceapraichean was next, this was another pleasant ascent which seemed to take little time and from the summit the views were stunning. Views on the way up Meall nan Ceapraichean. Towards Creag an Duine Towards An Teallach and the Fannichs. Denise on the summit of Meall nan Ceapraichean. 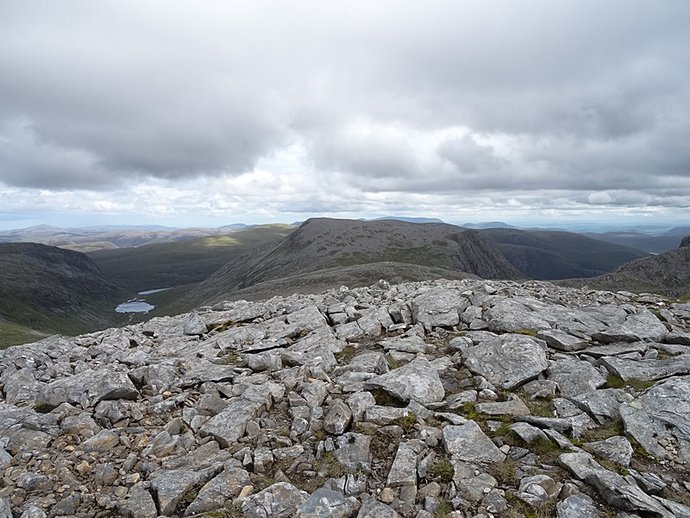 Looking back at Cona' Maell after leaving the summit.

Next was Eididh nan Clach Geala. From the summit of M nan C travel over the bump Ceann Garbh and keep going to about NH266831 and then 28 degs down to the little lochans in the bealach this took us down steep grassy bouldery slopes but it was safer if a little longer which is what we did ourselves. We tried to drop into the bealach sooner and found ourselves above tricky crags. From the lochans its a case of taking a bearing up to the summit, we found a bit of a path near the top but from where we were it was a case of going straight up hill.

There are two cairns on the summit, we visited both but the one with the white quartzite blocks in it I think is the true summit. 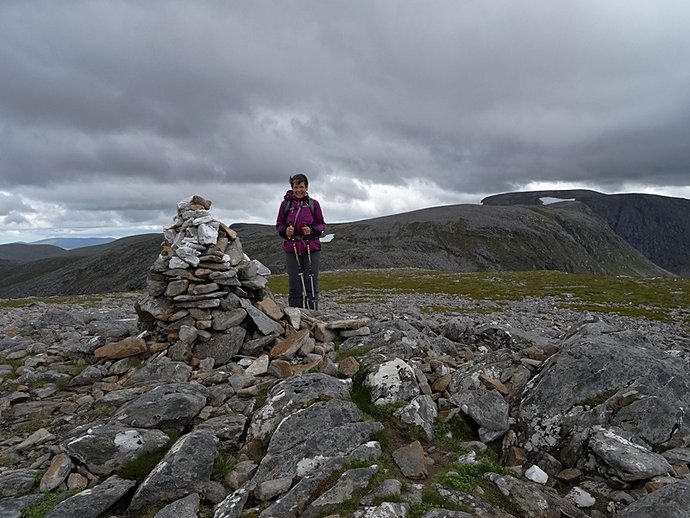 Again the views from this summit were great but the clouds were showing signs of lowering again so we headed in the direction of the little lochan Sidhean Dubh while we could see it and this proved easy enough. From the lochan we headed S down steep heather to the stalkers path and stayed on this to where it joins the outward path. Towards Loch Broom at the end of the walk, skies clearing.

We arrived at the car after what was a long walk out on tired legs thankful we'd decided to carry on and do the other three after Beinn Dearg. It's a great day out, well worth the effort but in my opinion it's worth saving for a good weather day because the views are just stunning.

Nice one Marts, glad you got them done and Denise up to the hundred too

Great stuff Martin, kind of wish I had joined you

I headed to Argyll & got soaked

PS: Plan to tackle these 4 on the Friday of the WH summer meet

Really enjoyed that - a good reminder of doing these 4 last September on a good day with great views.

Beaner001 wrote:Nice one Marts, glad you got them done and Denise up to the hundred too

Thanks Matt, just a shame we didn't get the views from Beinn Dearg but the rest of the day was good for them and it's a great day out.
Cheers.

Gordie12 wrote:Really enjoyed that - a good reminder of doing these 4 last September on a good day with great views.

Thanks Gordie12, It's a good day out, we enjoyed it. We could see showers all around us but only got caught in another heavy one after Beinn Dearg so luck was with us
Cheers.

Fife Flyer wrote:Great stuff Martin, kind of wish I had joined you

I headed to Argyll & got soaked

PS: Plan to tackle these 4 on the Friday of the WH summer meet

Thanks Martin, Good luck for the weather on the WH meet, it's about time it improved.
This round is great and straight forward enough but don't be tempted to drop into the bealach between the last two too soon, it could prove tricky especially in clag.
Have a good 'un.