An Stuc and the Ravens

An Stuc and the Ravens

An Stuc 20150724.gpx Open full screen  NB: Walkhighlands is not responsible for the accuracy of gpx files in users posts

Thought I had left in plenty of time to do these Munros, but on getting close to the start checked Viewranger and I hadn't synchronized it and so didn't have the route. Without a good internet connection I ended up in a cafe in Aberfeldy having a coffee to get some wifi

Got back to the Horn souvenir shop next to the start and there is a layby opposite. I asked if I could park there and the owner suggested a little spot just on the other side of the stream. Great this shortens things albeit by only a few hundred metres. Also the Lawers hotel seems to be charging a fiver for parking all day

Not sure if this is for overnight parking for motor homes or walkers, but I thought it a bit excessive.

so I moved quickly hoping that once out of the woods the wind would blow them away. Some cat flat through the deer fence, must have big cats around here 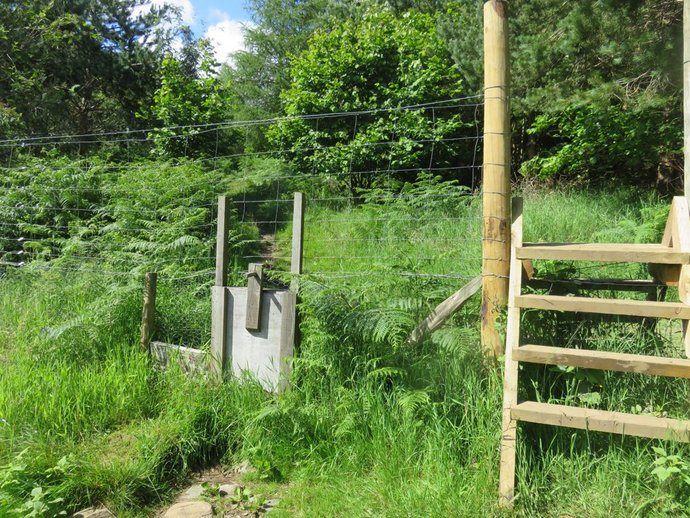 Out of the woods and the flies do fade away, but only once I got near to the junction of the return path, nice clear view of Meall Greigh 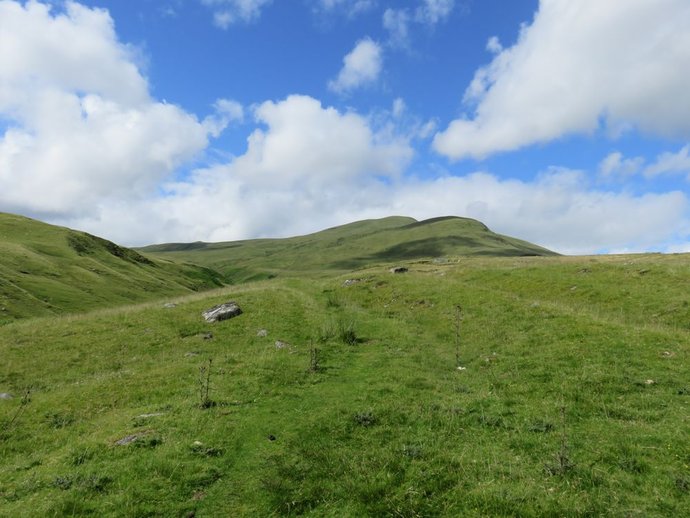 Views all round are impressive, and the very steep climb up An Stuc all to apparent 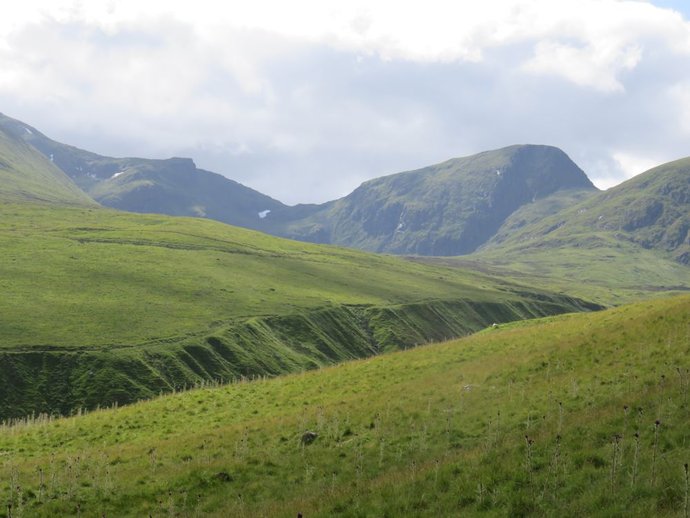 The walk up to Sron Mhor is quite steep, but I slogged it out and on getting to the flat section before the climb up to Meall Greigh I saw what I thought was a Raven and quickly got the camera out, but although it rode up on the wind a couple of times I never got close to getting a photo. The views over to Lawers and Stuc make up for the disappointment 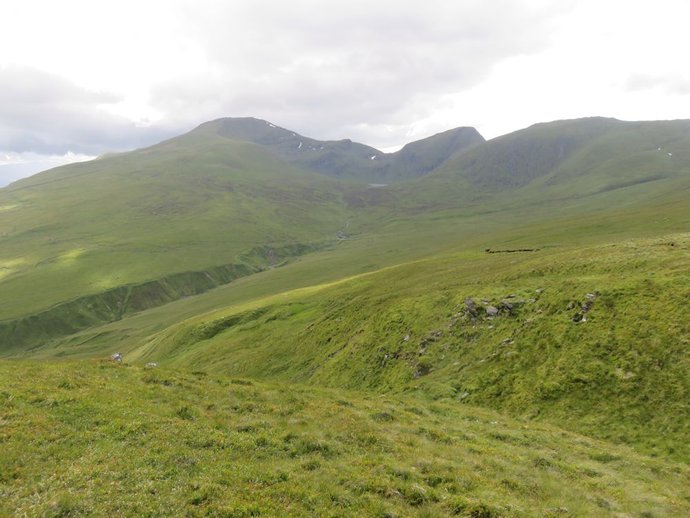 On up to the summit in the breezy but sunny conditions and just before the summit three Ravens took off from just below the summit on the western windward side, I put the camera on zoom and blasted away on continuous mode in the general direction, but only managed to get a couple of shots with anything in the frame and it was into the sun, so nothing worthwhile.

Got to the summit and fine views all round, this one with Carn Gorm in the background 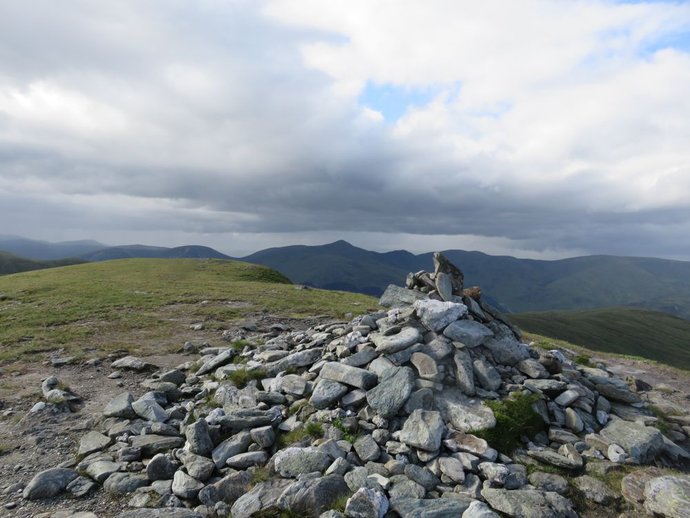 It's nice to have done Carn Gorm a couple of days earlier as I can really get a feel for the lay of the land.

The walk down to the bealach before the climb up to Meall Garbh is pretty tame and a bit squidgy in places. The views and the interesting landscape took my mind off things, although I was aware that I was losing quite a lot of height. 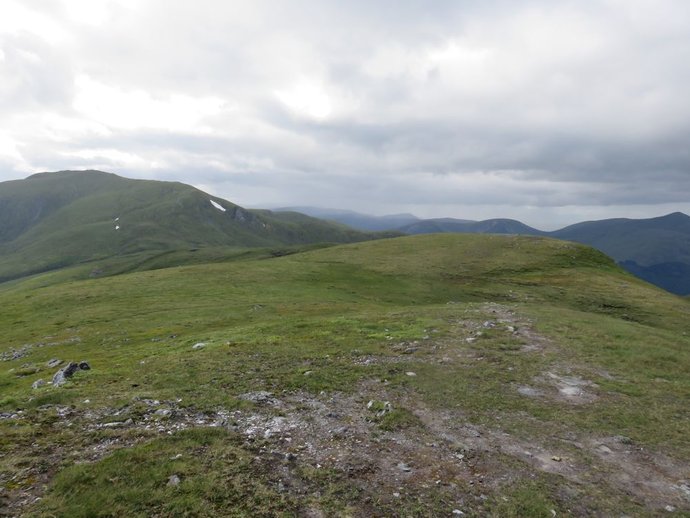 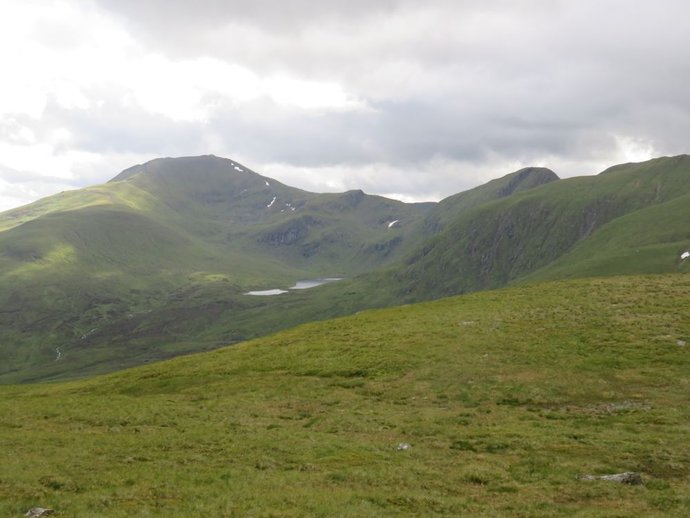 Lairig Innein, the bottom of the bealach 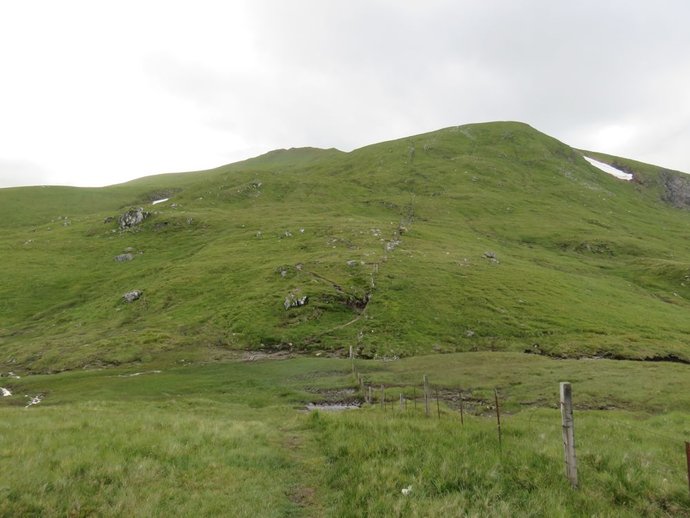 So far its all been pretty green and lush with a few boggy parts.

Started the climb up to Meall Garbh and quite near the top the terrain changes subtlety to more rocky and dry going. Nice view of Ben Lawers once I got to the outcrop, though sadly the top is covered in clag, Beinn Ghlas in the background 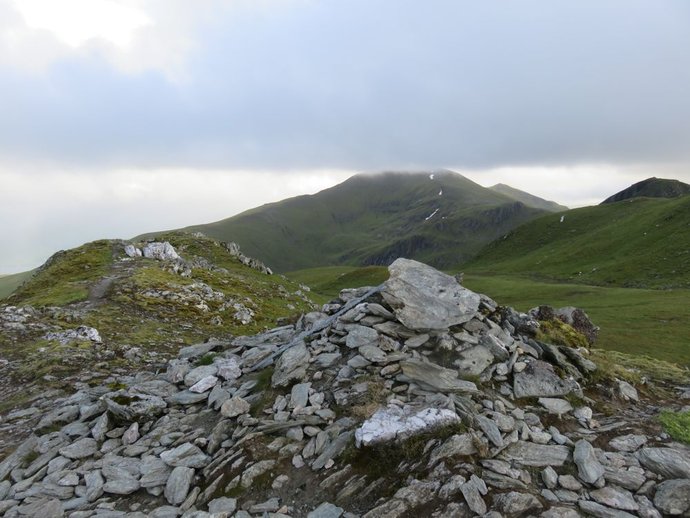 It's been very sheltered on the walk down to Lairig Innein and on the way up to the outcrop of Meall Garbh, but now I could feel the force of the wind. Just before the final climb up to the summit of Meall Garbh the Ravens appeared again. I had a feeling that I would meet up with them on the this side as they had flown off towards the head of the corrie from Meall Greigh; this time I'm getting a photo, although they are still quite a long way off 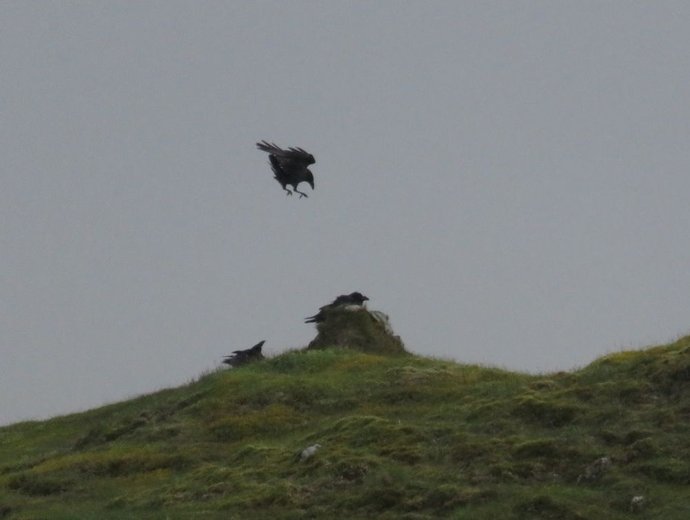 I was hoping to sneak up on them from further along the track, but as soon as I moved they flew off

perhaps it was the breeze that made them fly off, because a few metres on and I was hit by a very strong gust

Up to the summit carefully, it was pretty breezy and at times I was walking with bended knees to lower my profile and centre of gravity 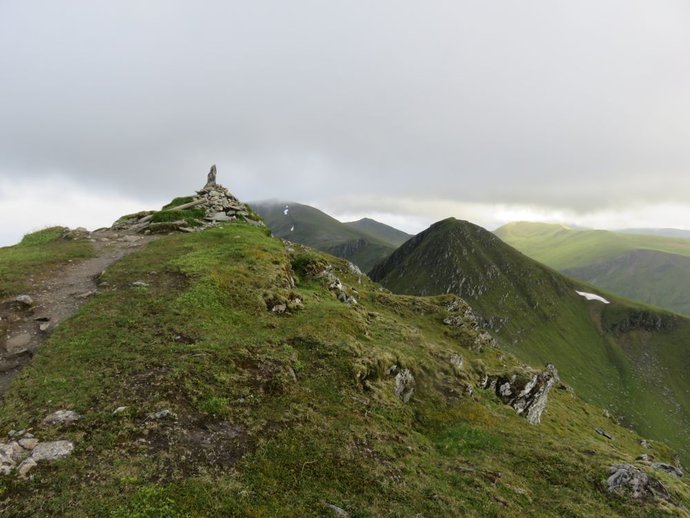 The wind was due to moderate which was why I wasn't initially too concerned when starting the walk. Great view of An Stuc though

It is very steep

I can see where quite a lot of the path is, but it disappears for a short section

I stopped and sheltered from the wind and considered how I felt, put on gloves for a scramble, stashed the walking poles and took a close up photo to see if I could work how to get up to the summit. Not much help from this as for whatever reason I didn't get anything in complete focus. You can see the section that I was concerned about though, I could make out the path most of the way, just to the right of the red line, but where there is a gap looks like a rock climb 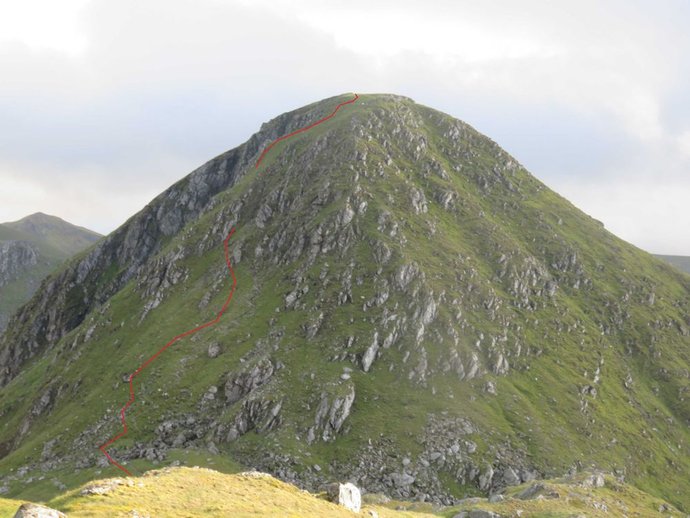 It's pretty windy, but I'd be on the sheltered side. I can always crawl once on top if necessary

Made my way across the bealach and got to the bottom of the accent still not very sure about how I felt. Looking down Cat Gulley to Lochan nan Cat I thought that perhaps I could bail out down there, but that might through up it's own surprises. Ah

perhaps this isn't the path, took a look at the sat nav; this is the path 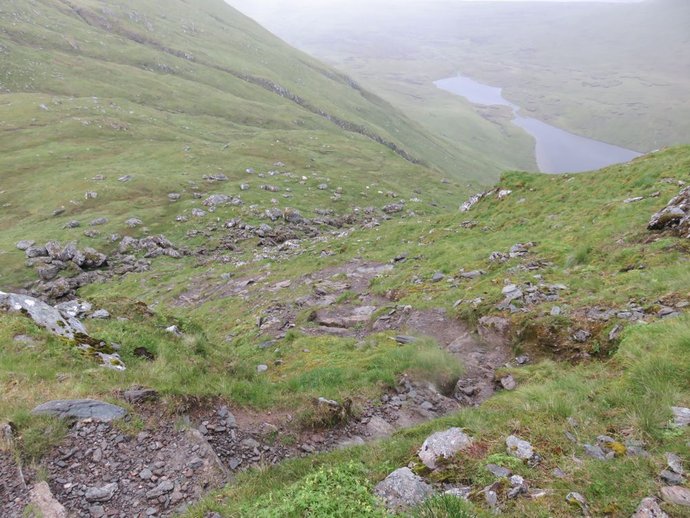 The camera was stowed as well as after this. A slight shower didn't make me feel any more comfortable although it didn't last long and wasn't heavy. The next section of the path requires attention as it gets steeper with loose rocks. Got to the section I was concerned about and it definitely requires attention

I always made sure that the rocks were solid and for one hand hold dug out some vegetation to make sure of a secure hand grip while a confident step up was required. Made it past this section, but didn't relax until I got to the flatter section just before the summit, still hyperventilating but relieved to have made it unscathed. The wind had at last abaited, but sadly the summit is covered in clag 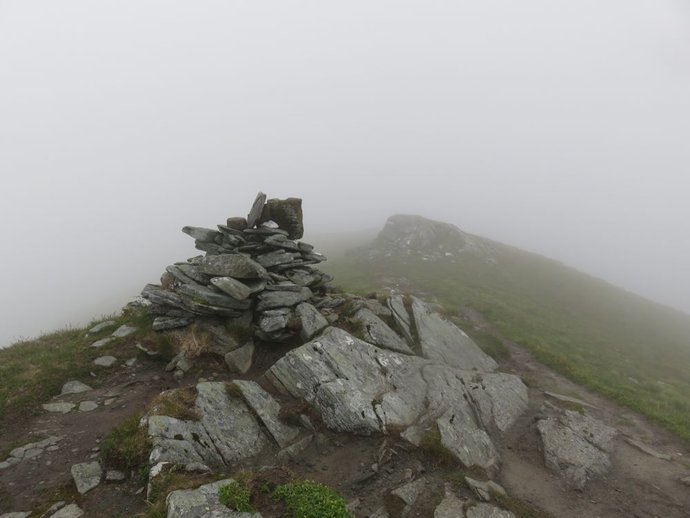 Made my way down the other side and not sure why, but assumed that I had one more summit to go Ben Lawers

Got down to Bealach Dubh and out along a path towards what I thought was just a viewpoint for Lochan nan Cat, took some photos and made my way back.
A snow hole 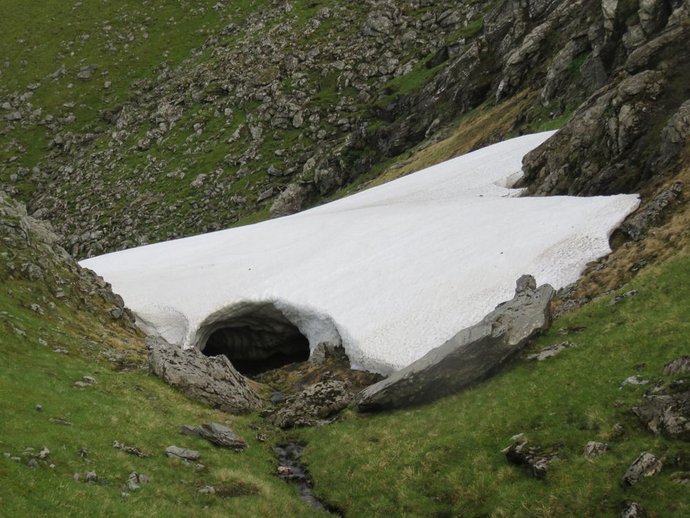 Went out along another path which was to a view point, nice view 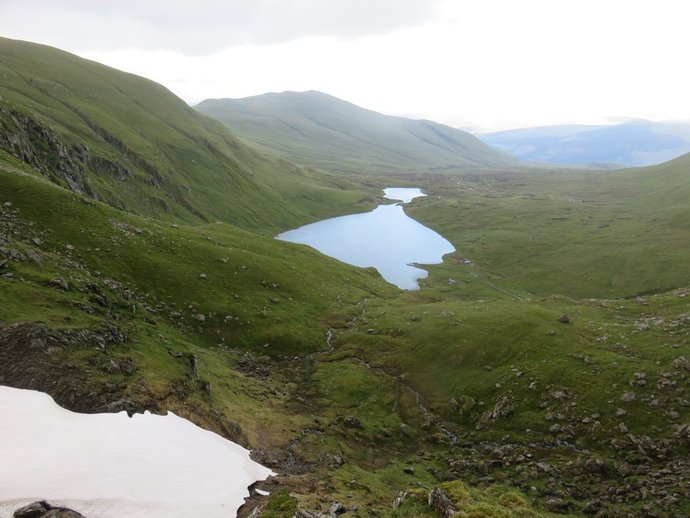 Got a fair way up before realising that I was done and should now be heading down by Lochan nan Cat. Took a look up at Ben Lawers. This would certainly be a nice path to take to the summit, but I'd already ticked it off from the other side, it was getting late now and I wasn't sure about a way down to Breadalbane from Lawers summit although it did look reasonably tame. Anyway walking down past nan Cat would be pretty cool

A last look up to the summit of Lawers 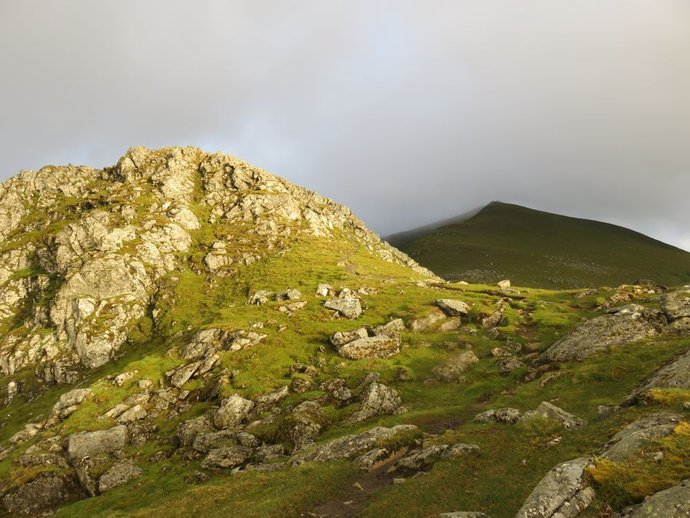 A nice view back across to An Stuc 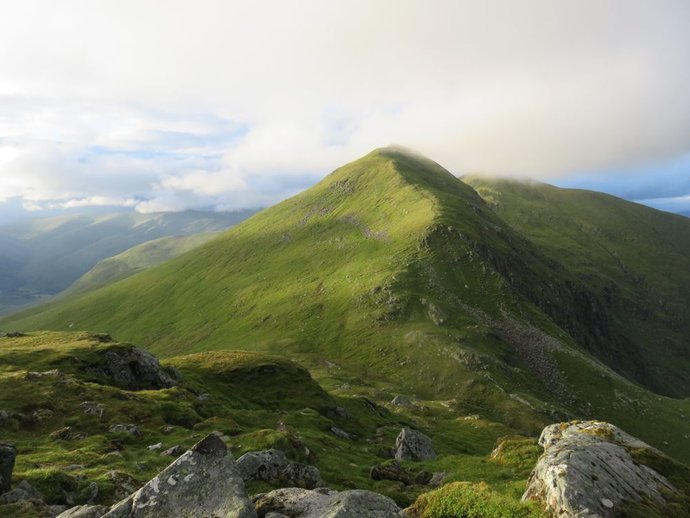 and some evening sunshine improves the view down Lochan nan Cat 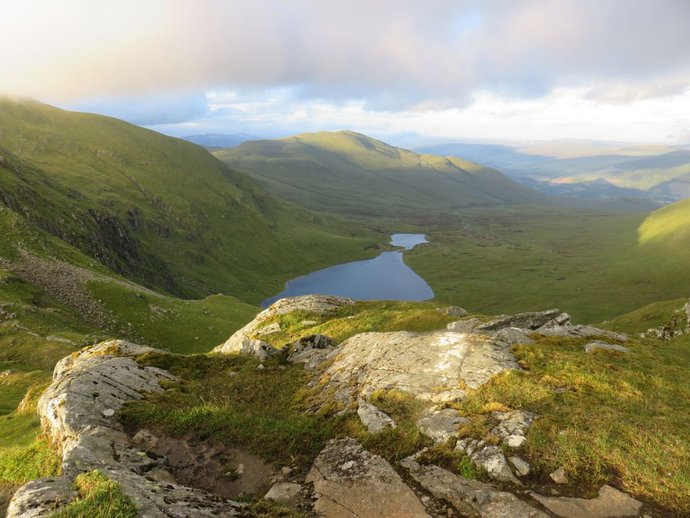 Once I got down to what I assumed was just a view point I realised why it had been so easy to be mistaken as the path is partially covered by the snow. Picked my way down and got to the edge of Lochan nan Cat and looking back up and around the corrie my feelings were what an incredible place to be standing. 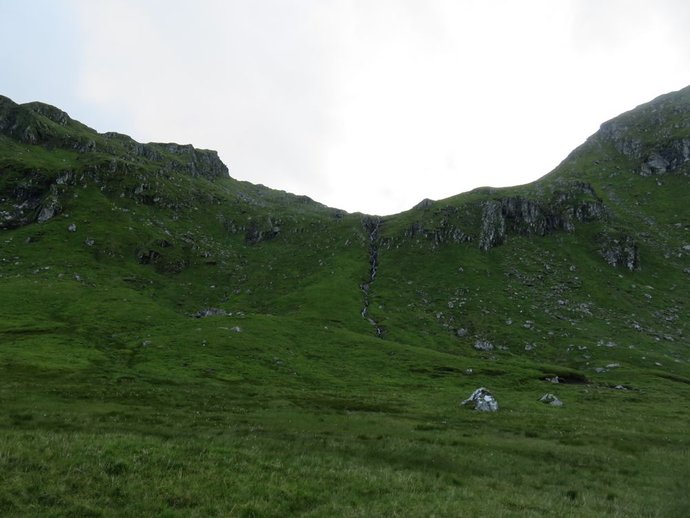 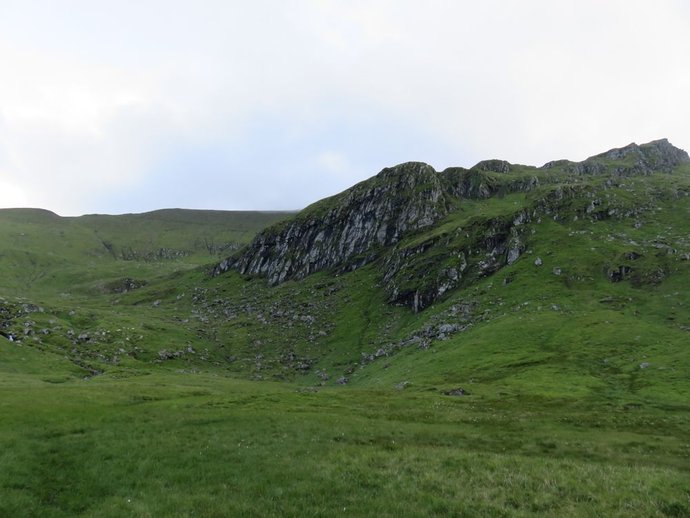 The crags below An Stuc 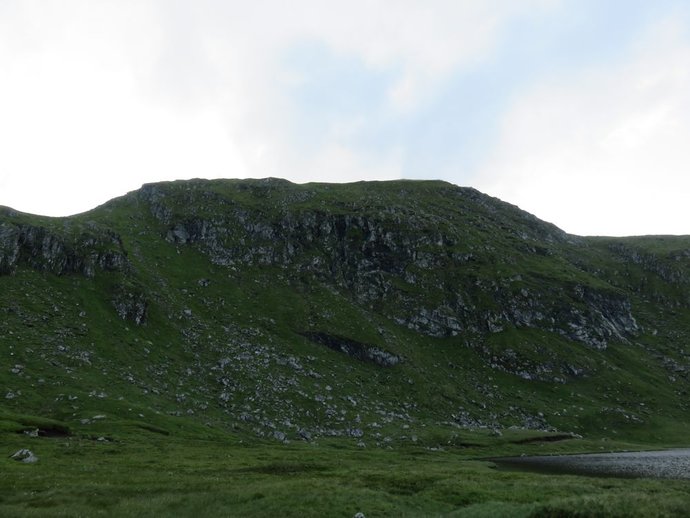 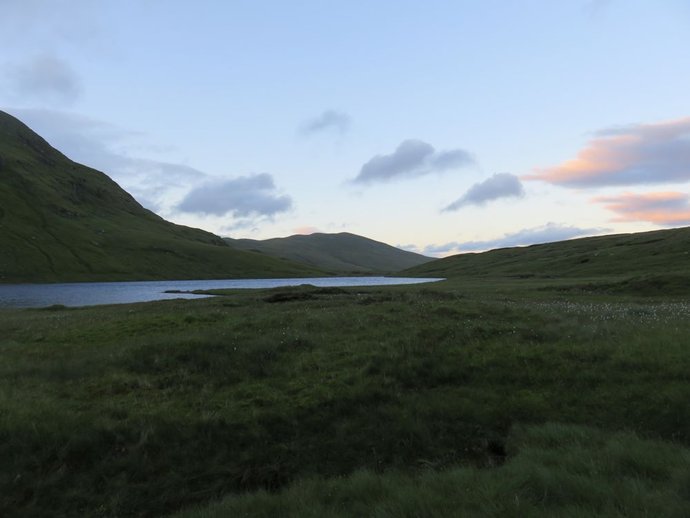 The walk along down by nan Cat is very wet, although I never ever sunk too deep in and had put on gaiters at the start. Properly waterproof leather boots essential as well though

There's a small hydro dam which looks like it will be getting heightened or repaired and there is a new well made landrover track leading to it from further round.

The old construction track which is now overgrown forms the path back from here along the top of lawers burn gully and is thankfully dry. A tame zig zag down later to a small bridge across the burn and on up the other side of the gully to the path down into the woods.

Got to the car just as the last of the light went, glad to be back, but also very satisfied.
Not for the faint hearted, but very much recommended.

Thanks for this. Very interesting! Strange coincidence: I'm planning a walk in this area, and within a few hours your and another report pop up covering it!

It looks every bit as good as - indeed better than - I'd hoped!

It's a nice walk with the lochan at the end - pity about the clag on An Stuc though. Can remember being very lucky (for once

Alteknacker wrote:Thanks for this. Very interesting! Strange coincidence: I'm planning a walk in this area, and within a few hours your and another report pop up covering it!

It looks every bit as good as - indeed better than - I'd hoped!

You're very welcome Alteknacker, I'm sure you will have a great experience.
From the outcrop of Meall Garbh to the end of An Stuc is a very memorable section.

rockhopper wrote:It's a nice walk with the lochan at the end - pity about the clag on An Stuc though. Can remember being very lucky (for once

Getting a clear view on reaching the top of An Stuc would have been incredible, but sais la vie, my heart was pumping anyway

Glad you had a good one for your day

that was great. I recall many years ago we did the Lawers group starting from the old Visitor Centre and planning to finish on Meall Greigh. We got to Meall Garbh and it looked an awful long way away so we bailed at that point. Meall Greigh has been laughing at us ever since!

mrssanta wrote:that was great. I recall many years ago we did the Lawers group starting from the old Visitor Centre and planning to finish on Meall Greigh. We got to Meall Garbh and it looked an awful long way away so we bailed at that point. Meall Greigh has been laughing at us ever since!

Hey Mrs Santa if you managed to get by An Stuc, especially coming down the way I went up, then going onwards to Meall Greigh would have been a stroll

Especially since you have recently walked all over Knoydart