Day seven of our holiday. One more mountain to do, and one more day to do it in.
To be honest I was Kn***ered but there was no way I was going to chicken out!
It was not a particularly warm day and there was quite a bit of cloud cover so we decided we were not going to do the circuit as described in WH but go straight up and down again. As Rudolph had to go home again the next day the plan was that we would camp again overnight then I would go to Islay to visit my mum for a week as I still had another week off work

Surprisingly enough, for a not too gorgeous day in the middle of the week (Thursday) we met more people on this hill than we had on all the previous six days!
I forgot to switch the GPS on until we had walked a bit so it looks like we were helicoptered in
There is a brilliant constructed path which takes you pretty much all the way to the top. I was very grateful.
I spotted these flowers on the way up, does anyone know what they are? what is this flower? 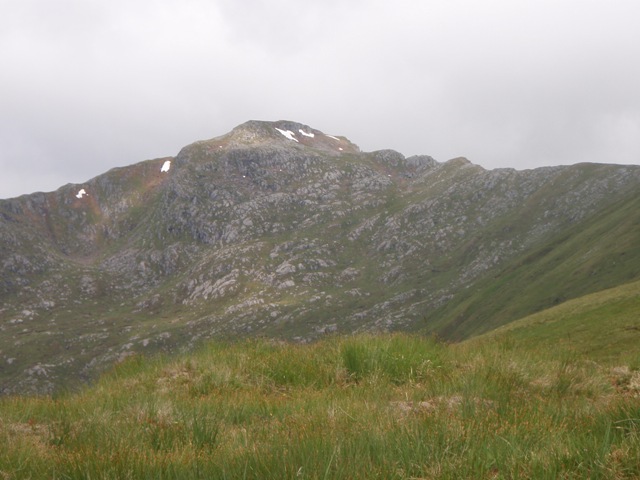 We hit a snow patch just before the top of Sgurr Coire nan Eiricheallach which was easily crossed or bypassed but we had a bit of fun with it. Rudolph on the snow patch After Sgurr Coire nan Eiricheallach the path becomes rougher across boulders and steep slopes, but still easily found and well constructed with no real difficulty. There is a steep pull up to the summit along a ledge which looks like it has been dug out many years ago, where there was wood sorrel growing.
Views of the surrounding hills came and went, but we had some fun trying to identify which hill was which with some healthy disagreement and I am sorry to say I cannot remember which pictures show which hills! I believe this is Garbh Chioch Mor, Sgurr na Ciche and Ben Aden. Looking up to the top again, this time from the west side of Sgurr Coire nan Eiricheallach Rudolph going on ahead across the boulders Wood sorrel flowering just a few feet below the summit

I really slowed down for the last km or so of the ascent and Rudolph went ahead; he was going to put the kettle on for a brew, but when I got to the summit he was busy chatting so my tea was not ready.

however there was a lovely sheltered spot just below the summit which was ideal for a kitchen and a wee sit down out of the cold wind.
We stopped there for lunch and a rest and chatted with a few folks who came and went. Getting the kettle on 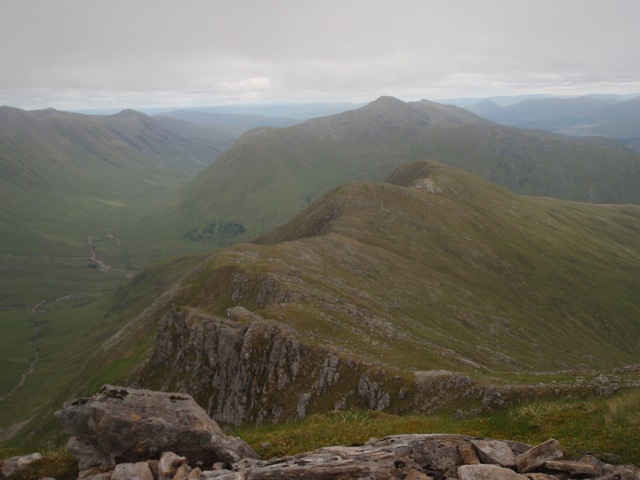 Looking back the way we came with yesterday's hills in the middle distance, Ben Tee just to the right of them, Easter Glen Quoich on the left and the South Glenshiel ridge on the far left 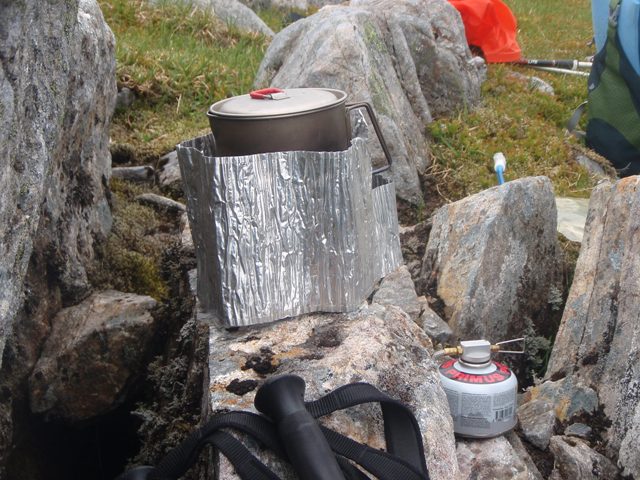 the kettle is on! Happy dinner, I just realised this was my 150th Munro! Rudolph on the top, identifying hills Honest, I touched the cairn on the way past, I'm comfy here!

Then we went down again! Ben Nevis showing his (or her?) head at last. This is one hill you can't see Schiehallion from though!!

We reached the bottom of the hill at about half past three and had hatched a plan to go to the Real Food Cafe for tea, then camp at Bridge of Orchy or thereabouts and go our separate ways in the morning. However, Rudolph received a message from his spies that there was an extra Islay ferry that evening (which had been put on in case the Friday strike was still going ahead, although the strike had been cancelled). So I hot footed it down the road to Kennacraig while Rudolph went back to Yorkshire (poor dear).
I had my tea on the boat and I must have looked hungry and bedraggled because the steward gave me extra chips with my curry!
Just for your amusement:

and here are some more flower pictures from the last two days. 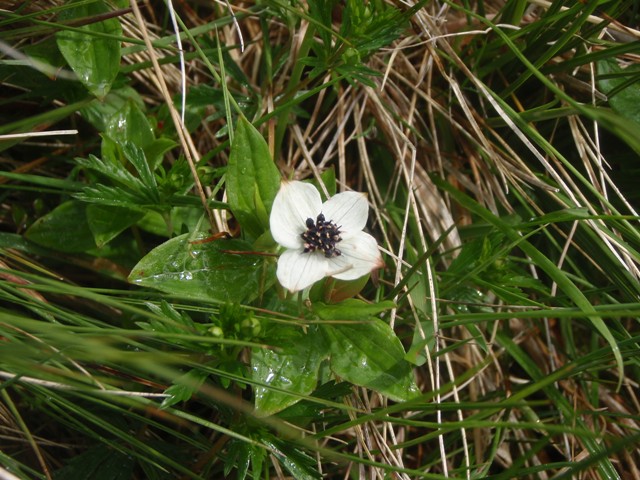 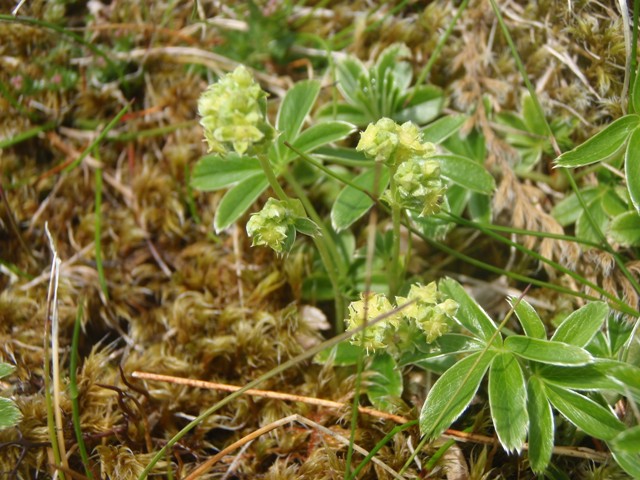 A nice hill with fine views, Mrs S. A good one to finish your trip with. I know what I would be drinking if I went to Islay.

simon-b wrote:A nice hill with fine views, Mrs S. A good one to finish your trip with. I know what I would be drinking if I went to Islay.

burn water and tea?? I guess not! Despite my family history in the Whisky industry (my great grandfather was manager of Ardbeg distillery before the first war) I don't like the stuff!

thank you. I can't get the hang of birds as they fly away too fast, but flowers at least stay put!

This is my favourite hill in that area, a wee gem and stunning views too. Superb area, great way to round off your trip

Great set of plant pictures, too. We did this one in winter conditions and the only wildlife we saw was a large herd of deer.

I see some mountains as "feminine" (Glamaig, Mt Keen, Beinn Alligin), but Nevis is definitely a male, the mighty king of the British Isles!

I think the flower in your photo is wintergreen chickweed.

I totally agree on the bird/flower thing.....

I reached 150 on Spidean Mialach a couple of days ago coincidentally on my birthday. We celebrated with tea and a wee dram of Bunnahabhain! We were amazed at how many orchids were still blooming in August - a reflection on this summer's weather perhaps?

I reached 150 on Spidean Mialach a couple of days ago

A fab hill, one my my faves so far. Well done!