Hello everyone, hope you are enjoying the sun (and the football

) We, hubby and I, left Threlkeld early and parked up at Mungrisdale, on the verge just before the village hall, and were off up the valley by 7am.

Route_Title.gpx Open full screen  NB: Walkhighlands is not responsible for the accuracy of gpx files in users posts
We passed the phone box, through a gate and followed the River Glenderamackin..Rather than climb the Tongue we decided to follow the path up the left hand side which would take us to the ridge. The Tongue, our route to the left

It was a gradual climb that gave us great views back down the valley, of Souther Fell, Bannerdale Crags and the ever threatening Blencathra. Back down the valley We were soon at the summit of Bowscale Fell where the wind was quite fierce and we soon got cold. Bowscale summit at 702m, shelter and Blencathra behind

We quickly set off towards Bannerdale Crags, despite the dry weather it was still a bit spongey but it was a steady walk for our next summit at 683m. 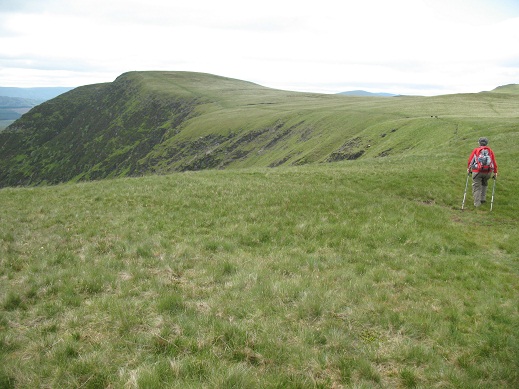 The Crags with Souther Fell behind Just to prove he is with me, our route up the valley is behind him View from second cairn to Blencathra Before we set off down to the Col we saw our 3 walking buddies just reaching the climb to Scales Tarn, they were climbing Sharp Edge today

We reached the col and without to much ascent we were onto Mungrisdale Common, it was quite a trudge over to the cairn and I know this Wainwright has been given some bad publicity but to us the all round views were splendid. Luckily it was dry and with a 360 we could see all of Blencathra, views to Derwent and numerous fells, Lonscale, Skiddaw, Calva, back of Sidda' and to the fells from where we had come. Calva and back of Skidda' Fells From Mungrisdale top, Derwent and many fells, Castle Crag in center Now it was the trudge back where we reached the col at the head of the valley down to White Horse Bent, we sat at the top staring directly at Sharp Edge, we could hear the climbers talking to eachother. As we set off down the valley towards Souther Fell, the view of Sharp Edge changes considerably, also there was numerous people heading that way. Another view of the edge

We lost all our height as we cossed the river to start up Souther, it was a gradual climb and the views were magnificent. Zoom in on the edge

As we climbed we could clearly see the routes to Scales Tarn and our route back down the valley. Routes to and from

There was a grand cairn at the southern end of Souther Fell and a very long walk across the top before we reached the summit at 522m, superb views across to the Dodds etc. It was quite steep off the fell as we headed straight for the village, we could actually see the car, you know the feeling when you wish you could transport yourself right to it. A great start to our week and ready for a drink as it was quite warm by the time we reached the car, still not too far to travel home, more walks to come, love Sue

I almost did a similar horseshoe the other week when I walked Skiddaw with Derek T off here... but instead I predictably went for my usual Grisedale Pike as the bad weather was coming in...

But I can't believe you went down the back of Blencathra and back up again to pick up Mungrisedale Common! That's real dedication! I honestly think that it is the Wainwright which Wainwright included as a joke! I hated it - I just tacked it onto the end of Great Calva and walked out below Skiddaw House on the valley track. I think most people would only normally include it on either a final ascent or descent to/from Blencathra et al!

it gives pretty good views to the surrounding fells.

I think he was too serious about his fells to have included it for a joke, we were glad it was dry, wouldn't like to be there in winter

Good report Susan,its strange to see how different it looks to when I was in that area in winter time.
I like some of your pics of Sharp Edge.

Thanks Paulo, we took quite alot as we had a cereal bar and a drink watching them cautiously make their way, some confident some not so, don't think its for me, it was quite windy on the tops that morning as well.

I agree with MC in a previous post Sharp Edge is quite polished, apart from the short exposed bit that can be a bit dodgy it isn't too bad. I've been along it with two terriers even with their short legs they coped, but then most dogs are not afraid of heights.

I'm not afraid of heights, or exposure its more hitting the bottom after falling from a great exposed height that scares me !

Out of the many thousands of people who traverse it each year very few get hurt. In the winter months (Nov-Feb) when iced, as PauloUK77 said, its a bit more tricky.

I've always wanted to get 'out back' of Blencathra but never managed it yet - I love the rolling hills and wide open feel that you often dont get in other parts of the lakes. As always a great report and cracking pics

Nice report to a group of underated fells.

I found the diversion around the lower fields a bit annoying, a long diversion because one farmer to refuses access one field no bigger than the average back garden !

I'm sure the footpath route across Souther Fell to Mungrisedale was there well before his fields (just ask the ghost army - if you meet them).

susanmyatt wrote:I think he was too serious about his fells to have included it for a joke, we were glad it was dry, wouldn't like to be there in winter

No, he actually admits that one of the fells in his books, he just put there for a joke! He did have that kind of sense of humour

Fedupofuserids - the route around the bottom of Souther Fell did used to go straight down - Wainwright lists that as the route - it's been changed since his books were written. To be honest, if I come down there in the evening, I just cut across his fields and hope he isn't looking! It annoys me too having to divert round, especially as the track is hidden in long bracken and a very ankle-snapping surface!

To be honest we did, meant vaulting the farm gate but needs must

susanmyatt wrote:To be honest we did, meant vaulting the farm gate but needs must

that ol' farmer's probably wondering why that path across his field from the bottom of Souther Fell to the pub door isn't fading at all yet!

'we could actually see the car, you know the feeling when you wish you could transport yourself right to it.' - Yes I know that feeling! What an interesting route, lots of useful description thanks (I'm going up there later this week, might well be in rain cloud so it's good to know Mungrisdale summit is where I thought it was on the map!).