We'd planned a weekend in Carlisle to give us the option for walks in the northern lakes or the southern uplands and decided to have a day in each. Friday 10th was chosen to have a go at the least accessible hills from home for us which are the ones at the "back o' Skidda"
We drove round to Peter Head Farm which is easy enough to find albeit on a very narrow single track road, there's enough room for six carefully parked cars in the parking spot by a gate and it has an honesty box, we contributed £3 for having this facility and its worth arriving as early as possible as there are no alternative parking arrangements nearby.
We got ready and were off, went through the gate which leads you onto the Cumbria Way LD path and headed for the Whitewater Dash waterfall. The conditions were warm and there were clouds over the summits. Looking back down to the start from the waterfall.

Its a nice steady walk to the waterfall, with loads of photo opportunities. Once past the falls we continued on the path for 1.5 km's to Dead Beck where there is a footpath going uphill towards Great Calva summit. This path stays with you all the way to the summit and is easy enough to follow even through the wet bits.
On the top we were in the clag so couldn't see much of the way ahead. Great Calva summit, mist drifting in and out.

There is a fence to guide you off the summit in the right direction to start with but you leave it where it changes direction to drop into the col before the easy plod onto the summit of Knott. The fence, a nice handrail for the first half km off the summit.

By now the cloud had come off the summits and we were treated to some very nice views. Looking to our next Wainwright, Great Sca Fell.

From Knott we headed over pleasant grassy hillside to Great Sca Fell which is really no more than a swelling in the landscape but you do get some nice views all around with Skiddaw dominating. Looking back to Knott.

From here you descend slightly and ascend a little up to the non Wainwright Little Sca Fell which again has nice views of the rolling landscape around you. Next on the agenda was Brae Fell, this was a nice walk over and once at the summit we could see most of the route so far and it looked along way. Longlands Fell was next and the walk over to it involved the most descent of the day heading towards Charleton Gill. the Gill looks worse on the map than it is and we easily crossed it at around NY278354 and went straight uphill to the summit from there. The views were great as by now there were plenty of breaks in the cloud and the sun was out. Longlands Fell, the views getting better and better. A wider view of the previous photo.

Leaving the summit we headed to Lowthwaite Fell which, strangely, isn't a Wainwright even though its higher than its
neighbour and from there we traversed around the hillside heading for the little col between Gt Sca Fell and Meal Fell our next port of call and the sixth Wainwright. Looking back to Lowthwaite Fell from the little col.

From the col the walk up Meal Fell is nice and steady and at the summit we found the largest cairn of the round so far, its massive considering the stature of the hill to the others we'd visited. 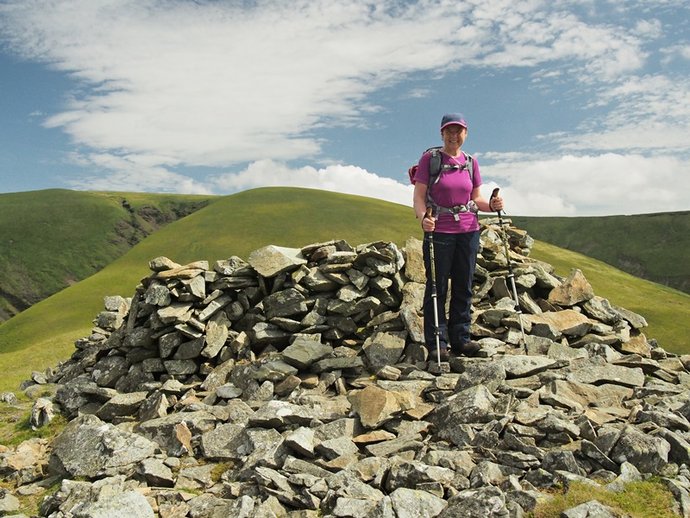 From Meal Fell we dropped down into the col Trusmadoor and then up the steep slopes to the final Wainwright Great Cockup, what a fantastic name for a hill! sounds like a navigational blunder. 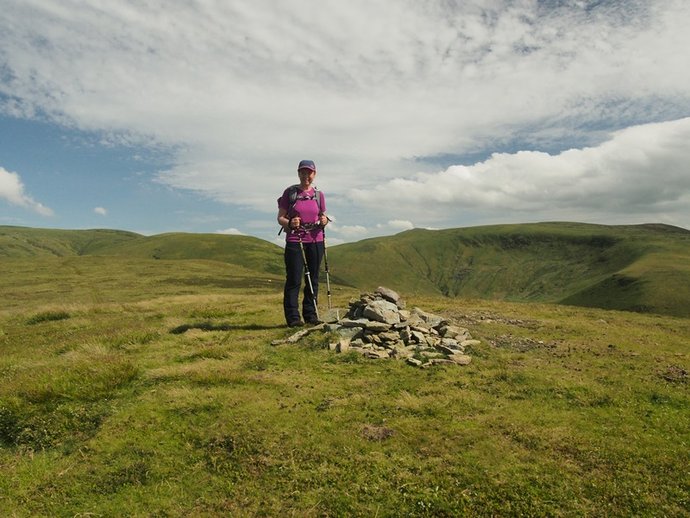 From Great Cockup you can just make out all the summits visited during the day and again the views are brill.

Panorama from the summit of Great Cockup.

From the summit we travelled along the ridge in the direction of Little Cockup and in the little dip we set off downhill over grass and ferns towards Dash Farm, found a path which took us onto the farm track and then back onto the Cumbria Way back to the car.

This was a great day out and the terrain is pleasantly easy going, you can spend as much time as you want doing these hills, they are probably best saved for a nice day because there's no need to rush them.

Nice report on an interesting group of hills. It's been years since I was up any of these. I remember Trusmadoor was a fascinating little col. Glad you got some sunshine in the end.

Definitely the kind of hike I would have been after when I was at home, lovely rolling hills and nice to see the weather picking up all the way along