A fantastic trio of munro's with glorious sunshine, no rain and barely a breath of wind.

Hadn't seen any walk reports linking these 3 together but plenty linking cairn gorm with ben macdui or cairn gorm with beinn mheadhoin so decided to give all three a go together. Went up with Stuart, Kyle & Chris

Day didn't start very well with kyle retiring halfway up the windy ridge route from cairn gorm car park due to illness. Chris walked him back down though then left him to his own devices and rejoined us by the time we reached the ptarmigan centre.

The climb to the summit of cairn gorm was otherwise uneventful but glad we took the 'windy ridge' route (particularly since there wa no wind!) to avoid the worst of the ski development stuff. Coming off the summit there is no obvious path so we headed east as best as we could, then descending grassy mossy slopes to the escarpment over loch avon. We descended via a rocky outcrop and small waterfall (which turned out to be a little tricky going) to the saddle at loch avon- the views here on the south side of cairn gorm with steep slopes surrounding loch avon on all sides are quite spectacular.

After checking out various options for crossing the stream we opted for rockhopping over via a small island. Then the hard work really starts with a step ascent on the north side of beinn mheadhoin up to the broad ridge. The going here was really tough- occassionally requiring all fours to combat the steepness until it flattened out. Then begins the slightly easier but equally unrelenting ascent to the summit. A massive granite tor awaits you as you reach the plateau- a fine natural summit cairn if ever there was one but don't be fooled- on approach from the NE the first tor conceals the true summit- a second, even larger tor behind with great photo opps.

We had a bite to eat here before pushing on the West with a clear view of our target directly ahead- Ben Macdui.
The route follows a gravelly rocky path along the plateau until you reach the edge, where the path breaks up into several route options, for a steep descent to an almost artificial looking but beautiful lochan at the base of a wide corry. The path (now singular and ruggedly built in rock & gravel) leads you on a wide arc approach to the summit of ben macdui around the corry. The path passes close to a near vertical drop to the south, which must prove lethal in winter, before the final ascent. As you near the summit the path gives way to a field of huge boulders which you have to navigate your way over before celebrating reaching britain's second highest peak.

Loch Etchachan from the East approach to Ben Macdui

Having not seen anyone for several hours since we left the summit of cairn gorm it felt quite strange to come across a dozen or so folk strewn about the cairn, chatting amongst themselves. Always a good indicator that there is a far easier and more accessible route to the top than the one we'd taken. And so it proved to be the case.

A quick break here then it was off along the path to the north back along about 4 or 5 miles to the car park. The path here is entirely man-made with gravel and rock, presumably to cope with the huge volume of tourists trekking to the summit of ben macdui from the car park. This path really does make the summit of ben macdui very accessible, provided you can manage the 9-10 mile round trip. 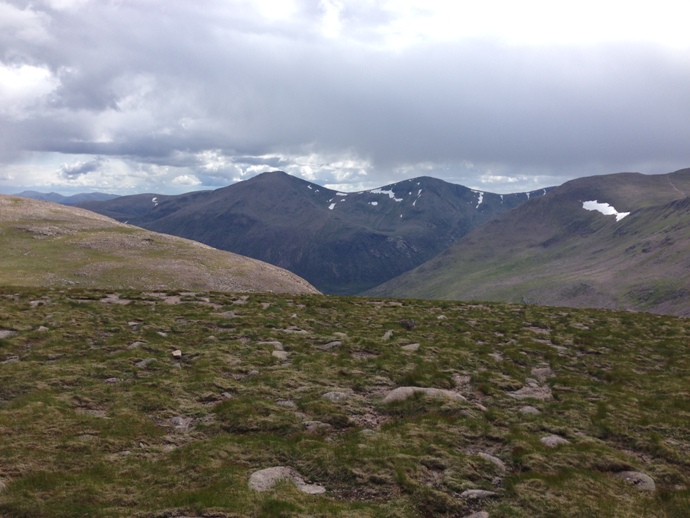 We made it back to the car park for the last bus at 5:05pm which took us back to aviemore, where it had been raining throughout the day, unlike the dry conditions we'd had on the hills. Not often you get to say that.

Would recommend this route but two things to be aware of- choose your descent from Cairn Gorm down the escarpment to loch avon carefully (probably best to head further east than we did) and be ready for some real cardio work ascending from loch avon. This might be made easier if you head further east to ascend on slightly gentler slopes but there are path options which we followed which take you straight up.