We had unfinished business with Carn nan Tri-tighearnan since February, when we had an unsuccessful winter attempt on this Graham. Unsuccessful not because the mountain itself is difficult in winter conditions, but due to snow-blocked roads. We both agreed then, that Carn nan Tri-tighearnan has to be left for a summer day, even though it's only half-day's walk and most of the climb is done on a good track.
There are other routes to do this hill (Malky has something to say about it

) but I assumed that no matter how we approach it, we must be prepared for Peat Hag Challenge 2015...
Taking advantage of a semi-good day, we drove to Drynachan and then past the narrow bridge to Daless farm. The road is horrible even in summer, and now we knew we took the right decision, not tackling it in winter! After about a mile of crawling 10mph over countless potholes, we found a nice place to park just before a ford over Allt Breac. There is plenty of space to park on the grass: 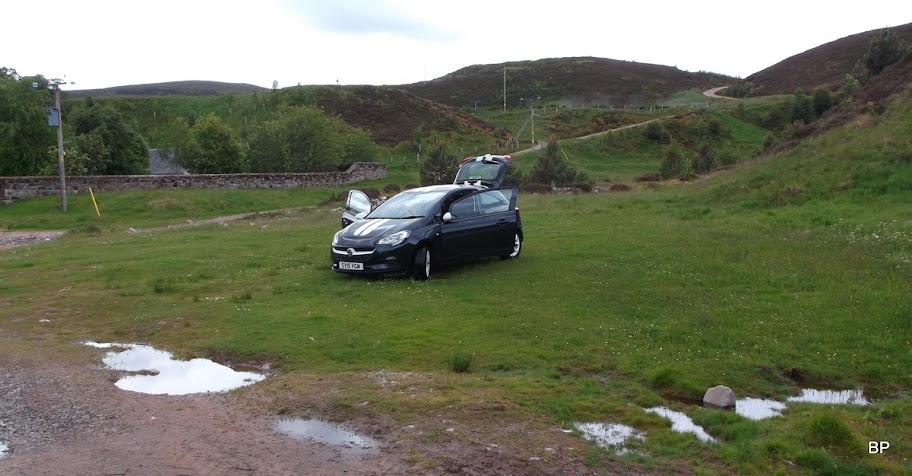 Our route took us due west up a good track to the height of about 500m, where the yellow-brick-road ends and the final 1.5km are pathless and full of peat hags. On return we took a short detour to the lower top, Carn na Uillt Bhric.

Track_DALESS.gpx Open full screen  NB: Walkhighlands is not responsible for the accuracy of gpx files in users posts
Having forded the river, we had a nip into the gorge of Allt Breac... 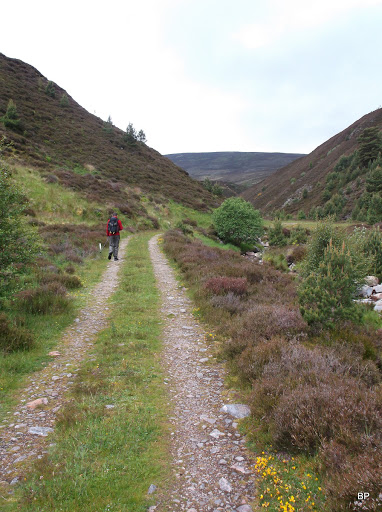 ...but we didn't find anything interesting there, so we returned to the main track:

After about 1km of walking, we emerged on a wide plateau overlooking River Findhorn. "Our" hill was to the right, but in front of us, a lovely panorama opened up. Seriously, we didn't expect such nice views from a route that was rendered dull and uninspiring... We didn't take our large camera, we only had a little pocket cam (Fuji Finepix AM), I hope that my photos give at least some justice to the vistas:

View south across the glen with River Findhorn meandering in the glen:

The "yellow-brick-road" was a bit less inspiring:

Having forded Allt Bhreac again, we reached a gate and behind it, we met some noisy locals (seen here to the left

The track cuts through the heathery slopes like a scar, but this is not an area often visited by tourists, so it's not such an issue. I wondered, who apart from a few dedicated Graham baggers, bothers to visit this God-forsaken place?

The track ends abruptly about 20m below the summit of lower top, Carn na Uillt Bhric. From here, there are nice views across the gorge of Allt Breac:

From the end of the track, we walked boldly across the wet, pathless terrain, soon to discover the true nature of Carn nan Tri-tighearnan... Let the Peat Hag Challenge begin! 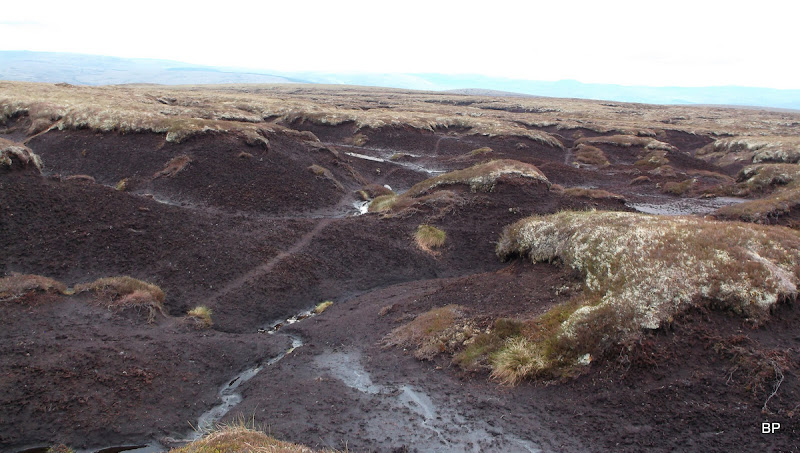 Obviously we were not the first people to tackle this world of mud and bog. Previous visitors left some helpful tools behind

We could see the summit, only about 1km away in a straight line, but reaching it in straight line would be impossible!

Peat Hag Challenge 2015 involved some careful hopping and jumping from one tuft of heather to another, but in some places you'd have to be a kangaroo to get to the other side...

Being a panther, I have some jumping abilities, but this was as peat-haggy as I could manage 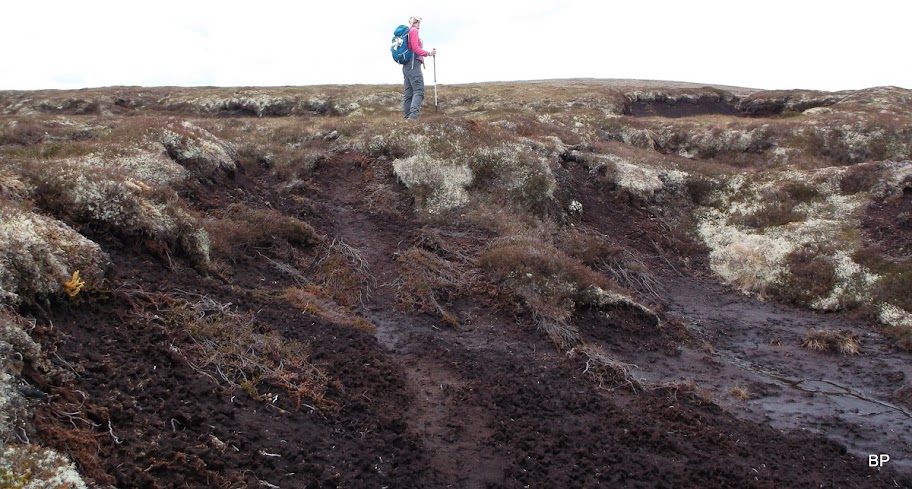 Eventually, we got fed up with hopping over peat hags, descended to the biggest one and tried to find our way walking on the bottom , it had a small stream running in the middle, luckily the ground wasn't boggy here: 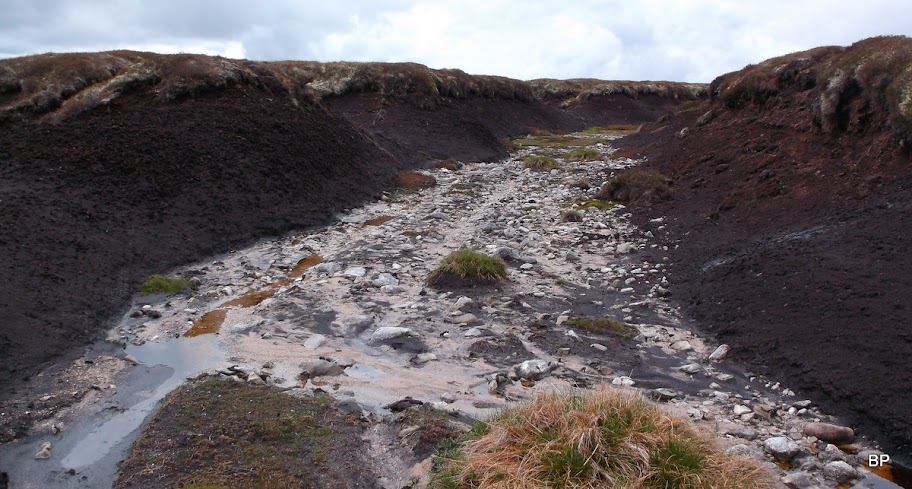 Kevin kept joking, that we still had to return the same way and the Peat Hag Challenge would be even worse on the way back, as we wanted to detour to the lower top. I guess this is just the nature of Carn nan Tri-tighearnan...
The summit of the Graham is topped with a trig point and just as well, otherwise it would be hard to determine the exact highest point on this featureless plateau. I wouldn't fancy doing this hill in clag. As much as it's worth, if you do all the hard work with peat hags, getting the views is a welcome bonus.
Me and Lucy on the summit:

The cloud base was higher than forecast and we could actually see the Cairngorms on the horizon:

Not an outstanding viewpoint, but better a small hill than nothing

Farr Wind Farm to the west:

The peat hag area we crossed, with Carn na Uillt Bhric behind:

Only when we were leaving the summit, we realised it was our 40th Graham! A nice round number I never expected to reach this year... I also didn't expect I'd celebrate it among peat hags, but that's another matter...

To reach Carn na Uillt Bhric, we trudged across the wet plateau again, over countless hags. We found the big one and followed it as far as we could, but later we had to scramble out of the "canal" and practice some hopping again. I usually find peat hags mildly entertaining, but this was too much. I felt relieved when we found ourselves on the lower top. It also has a trig point, Kevin was eager to pose first: 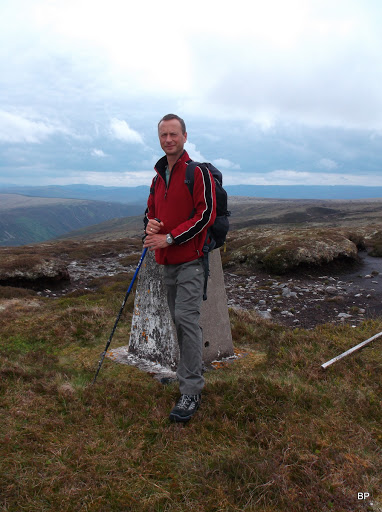 Back to Carn nan Tri-tighearnan and the Peat Hag Challenge:

Views from the lower top don't take your breath away, on a good day it's possible to see the coast to the north-east:

South towards the Cairngorms: 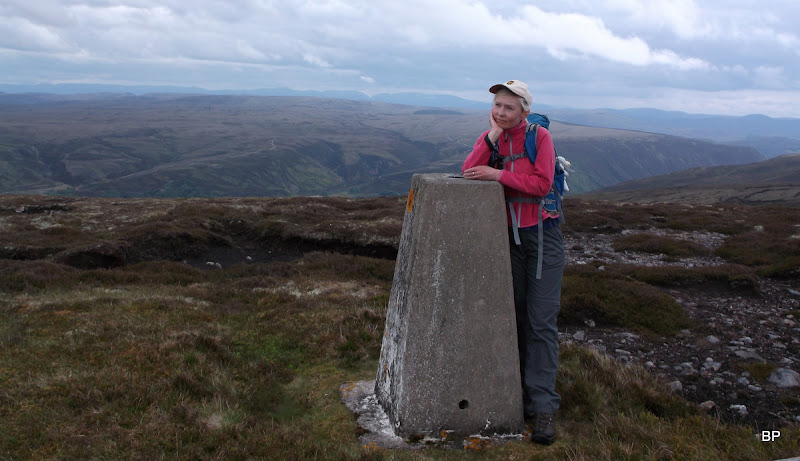 From Carn na Uillt Bhric we descended south back to the wide track and retraced our steps back to Daless. The whole outing took 3h 50min, most of it spent looking for the way in peat hag labyrinth... As I said, it can be entertaining to some extent, but I doubt whether we will bother to visit this Graham again...
For anybody who fancies a challenge, this is the right place to be! If you want to make it even harder, pick a wet, cloudy day and don't take your GPS. Lots of fun guaranteed!

My next TR, and the last one from our summer hols, will be much more inspiring. Get ready for some tors!

They do look impressively entertaining from your photos

well done on the walk just being out that counts

. Doesn't look too bad though - I'll probably go up that way sometime, just for completeness.

I don't mind this hill as it is close to home, but I still have one more similar one to go up just outside Edinburgh. Can't say I'm particularly inspired to make that journey just for some identical peat hags

I was doing my best to write an entertaining TR about one of the dullest hills I've done so far... Only three years ago I said I couldn't be bothered with CTT, but I guess my hillwalking madness has gone worse since then...

The hags are not drastic, just too wide to jump over so plenty of manoeuvring needed. Yes it can be entertaining to some extent. On the positive side, you're unlikely to meet anybody else en route and the area is very quiet. If we ever repeat this Graham, we'll probably do it from Slochd side, though it looks just as peat-haggy