Enticed up to Sutherland by Ben Hope, Ben Loyal its neighbouring Corbett and mysterious Foinaven, it felt like a real adventure setting off to explore the far reaches of the Munro map and a new part of Scotland.

We were surprisingly and completely done in after the first two, especially Ben Loyal (intended as a warm up!) ..........

obviously not as fit as we would like!! Foinaven we knew was a long day, so due to low energy stores and my new found, rapidly worsening fear of heights, ledges, sides and edges.........I talked myself out of it this time.
This has only served to make it more intimidating and it has now been added to my list of nemesis mountains which one day I will probably force myself to walk up and then seriously regret! It now joins Ben Eighe (after a complete freak out on reaching the top of the stone shoot) & Liatach (which I have never attempted). Alistair ensures me they are just easy walks, of course.

After reading a captivating description of Sandwood Bay in Poucher's Peaks, we decided to slacken the pace and take a visit. Poucher also described it as a good rest day after Foinaven

so along with a little pang of inadequcy there

it went on the itinary.

''The bay is a lovely retreat but to some conveys a sense of haunting. Those who reach it on a sunny summer morning, when the light is curving on the cliffs, will be rewarded by a scene of exquisite beauty''.

How could one resist?

Arriving at 7pm we were amazed to see about 15 cars in the carpark and began to wonder if it would quite the quiet escape we had imagined. Luckily we passed almost all these walkers on our way down.

The track is wide and easy going over the moorland (good for mountain bikes) with lots of wildlife and lochans dotted along the way. The dusk air was full of what looked like midges but lucky for us they did not seem remotely interested.....which definately prevented hell on earth Starting the walk in 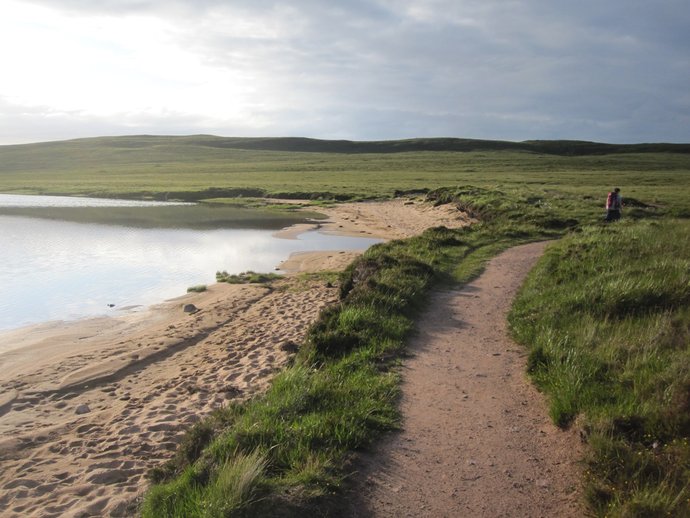 Over looking the dunes

We arrived with a few hours of light to spare and from the hill top could see a couple of tents in the far distance with the same idea, one with canoes (bit jealous). We set up tent amongst the sand dunes with a sea view and got a much needed dinner on the go. 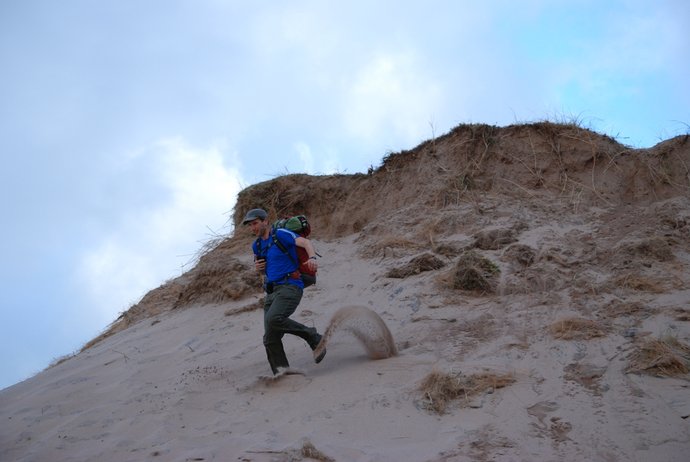 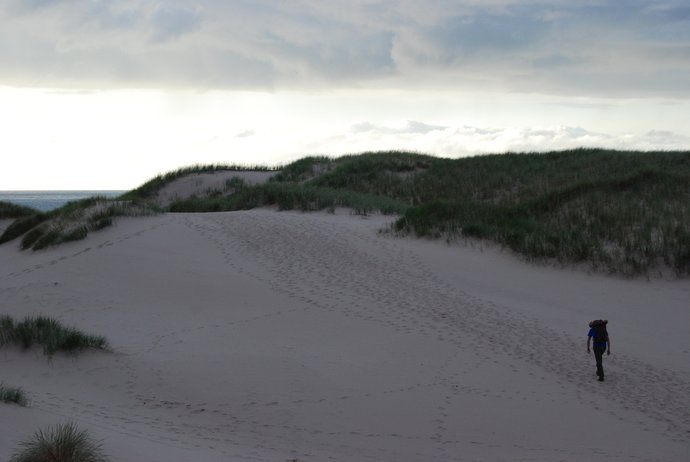 Walking through the dunes Happy to be here Chef getting to work

The weather was perfect for an evening stroll along the deserted beach, still midge free thanks to a light sea breeze and with a pretty spectacular sunset thrown in. 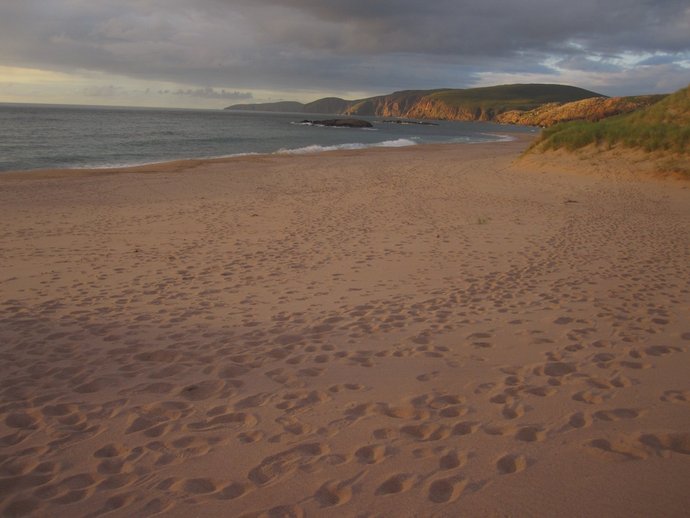 Evening stroll along the beach A poor Gannet washed up 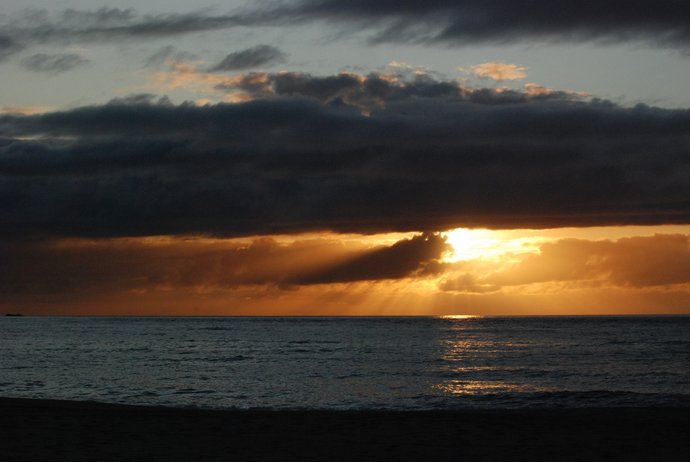 Not a bad sunset

Keen to see the scene poucher described, we set the alarm for 5.15am and drifted off to the song of the waves.
I woke 1 minute before the alarm dreaming I had missed the sunrise, and having had the best nights sleep in months.
Indeed a lovely sight. 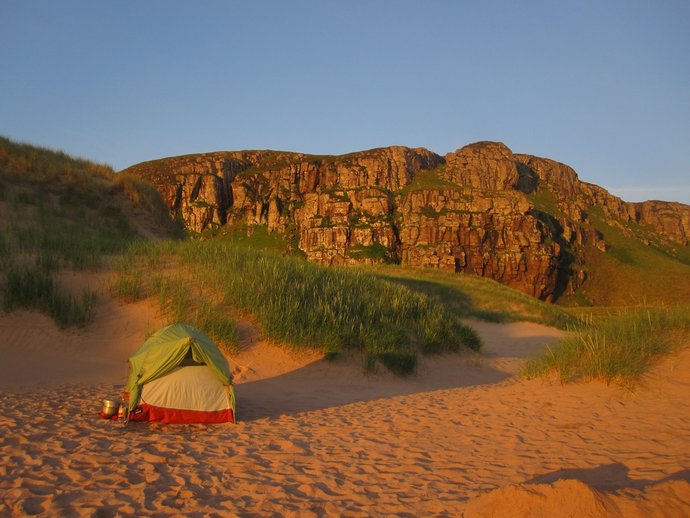 Tent in the morning sun 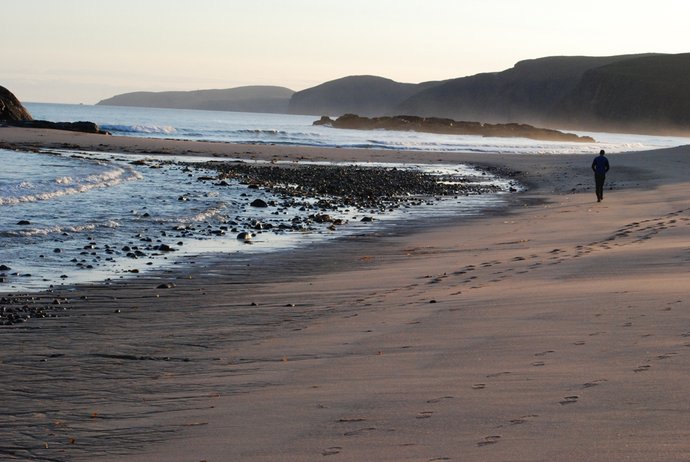 During our evening stroll the night before we accidentaly distured a family of Eider ducks roosting on the sand at the end of the beach, some seemed very young. On seeing us they headed out to sea in the dark and I was worried they might come to harm. It was a beautiful sight to see them the next day safe and sound. The eider ducks heading out to sea 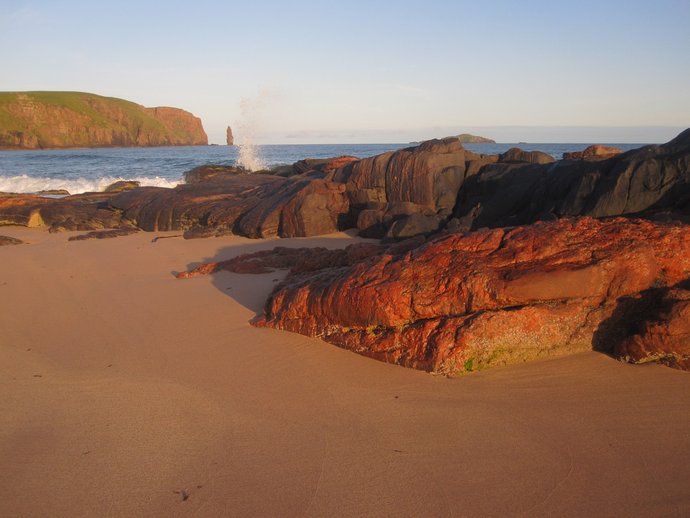 We stumbled across this old plane engine and propeller on the beach, as it appeared to be on top of the beach we wondered if it had been recently washed up. An internet search revealed that this was the known crash site of spitfire R7154 which set off from Cape Wrath on patrol on the 30th of September 1941. The pilot Micheal Kilburn survived and walked out to safety. The plane was destroyed and the remains are intermittently uncovered by the sea. Spitfire R7154 propeller and engine uncovered by the seas 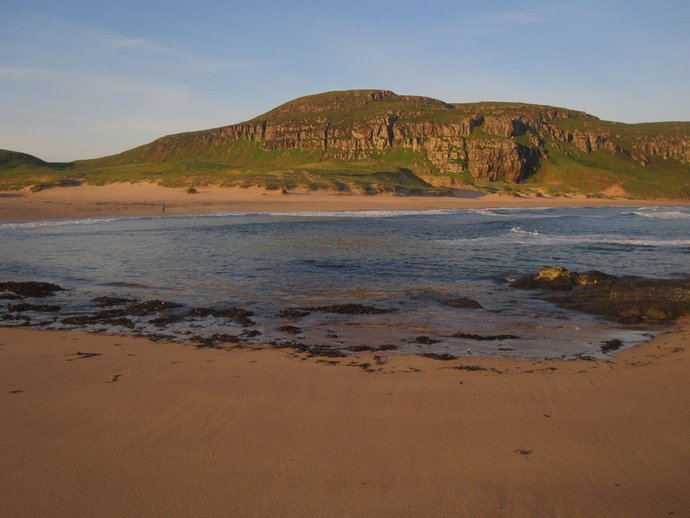 Tent under the cliffs

After a nice cuppa & few hours of sunshine we were once more on the long track out. Some nice wildlife along the way. Near the car we passed the first set of visitors for the day. 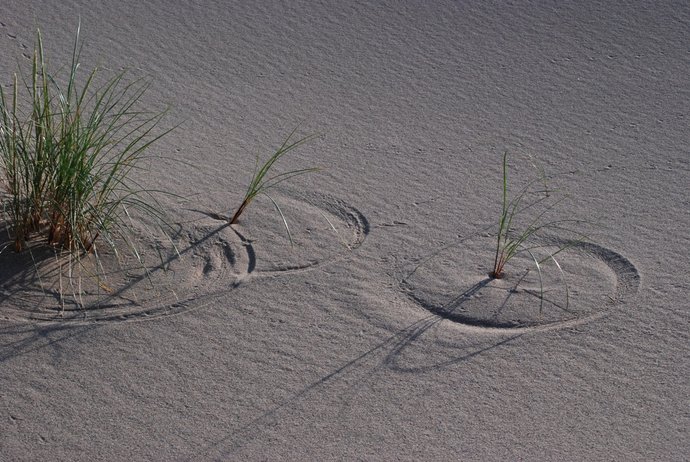 Interesting patterns in the sand, and some very small foot prints 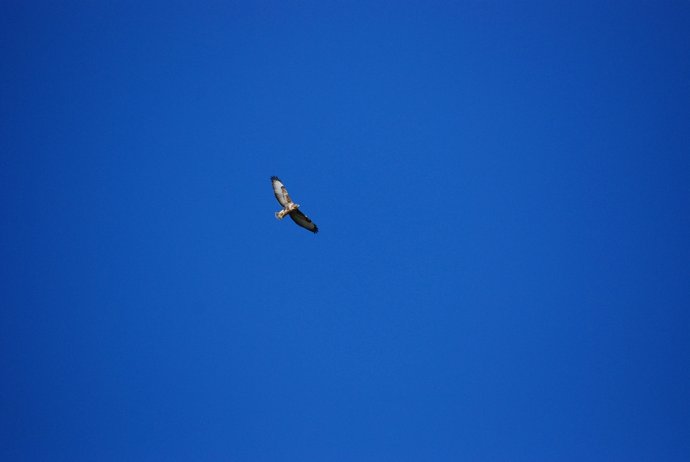 Buzzard high in the sky, we disturbed him from the sand dunes 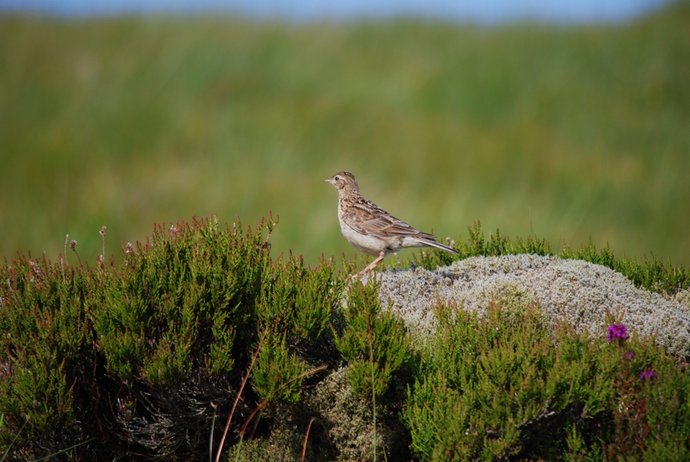 One of many lovely sky larks This place is good for the soul, I cant remember the last time I felt so well rested and refreshed.

Glad you got it almost to yourselves. It is a very special place. We were lucky a couple summers back to have good weather and the sands entirely to ourselves overnight. I have very fond memories of strolling along the waterline with a glass of whisky to keep the evening chill away

Yes the evening stroll was special, it is a lovely place to get lost in your thoughts! We saw no one else only their tents and we were also very lucky with the weather

Enjoyable read and beautiful photos...been a while since I heard mention of 'Poucher'

The original guides to walking before the McNeish days, still on my bookshelf, love reading them and still use them now. Thank you for posting

Beautiful, it truly is an amazing place and you were lucky with the weather. What a place to wake up.

I've heard of all sorts of stories of strange happenings and feelings around the place, ghosts etc, etc. But to me it is one of the most joyously peaceful places I've ever been. http://www.scotsman.com/news/sandwood-bay-is-a-beautiful-beach-shrouded-in-mystery-1-477058

I too hadn't thought of the Poucher books for years.

What a camp site!

In 1 word beautiful ,now I know why we done get great weather here in Scotland
places like this would be ruined

Wow it is nice to know others use it, I don't know much about other guides, sometimes it doesn't give a lot about times/difficulties except when something is a rock climb not a walk!! That is why I started using walkhiglands too

My dad gave me Pouchers Peaks about 10 years ago, really like it and have been working my way through! He gives the mountains & walks a personality and something a bit deeper

That article is great, I had heard snippets here and there about these goings on but I agree with you, it was such a calm, happy and light place.

A perfect campsite, just couldn't get over how well I slept there!

You are spot on about the weather, thank goodness