Rannoch to Dalwhinnie over 3 days

Rannoch to Dalwhinnie over 3 days


I had wanted to do a 'car free' walk ideally finishing at a different point from the start and taking advantage of the value 'Advance' train tickets. I had no goals other than 3 unclimbed Munros and reaching my return station in time. This is the result.

Day 1
Arrive Rannoch Station 1130 - warm weather, little wind and no midges! After a look at the exhibition in the Old Signal Box and the visitor centre I walked along the (only) road and turned off on the path signposted to Corrour. There is a lot of work going on this 'track' so it is not the most scenic start but after about an hour or so (5 km) I left the path behind and headed up to Sron Leachd a Chaorainn. The actual path became more obvious as the ridge narrows and the views open up allowing you to see down to the old lodge at Corrour and on this particular day panoramic vistas in every direction. I reached my first Munro of the day Carn Dearg around 15:00 and took a wee break to take in the gorgeous views before descending down to the bealach at 723m and then up to the second Munro Sgor Gaibhre. Tea was in order here so after finding a sheltered spot below the summit I brewed up and took in the views eastwards where Schiehallion was prominent, as it remained during most of the next two days. 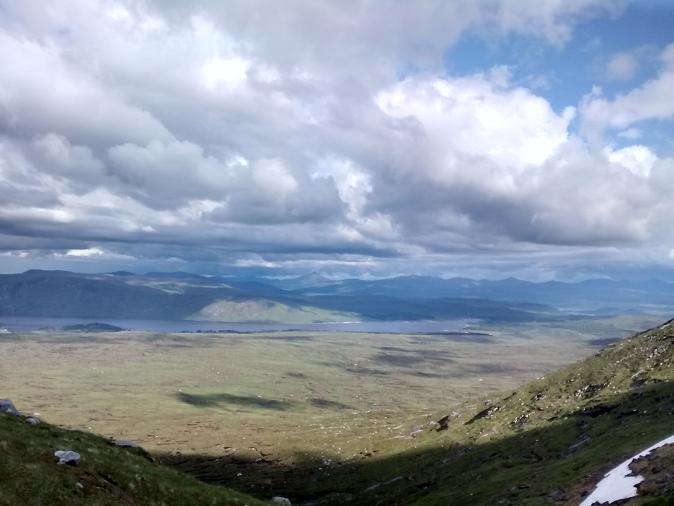 The route ahead was clearly visible down to Sgurr Choinnich and then over to Meall a Bhealaich and then finally to Beinn a' Chumhainn which I had decided would make a good spot to camp. From Sgor Gaibhre the summit at 904m is just out of sight which puzzled me initially but it came into view before long. I reached the summit just after 20.00 passing numerous interesting looking rocks on the way. I set up my tent just to the east of the summit giving a grandstand view of Ben Alder which I had never seen from this side. Not its most photogenic side but still impressive and giving a good idea of the enormous area of the plateau. A few deer stopped by to take a look at their new neighbour but were not much interested in my Ainsley Harriot couscous supper with tablet for dessert! A last look at the views for the evening and then off to bed and almost instant sleep.


Day 2
Wake early (around 4) to thick cloud so I felt happy that a later start would be in order and by the time I was up at around 7 and under way by 9, the clouds had dispersed and it felt like a warm day would follow. 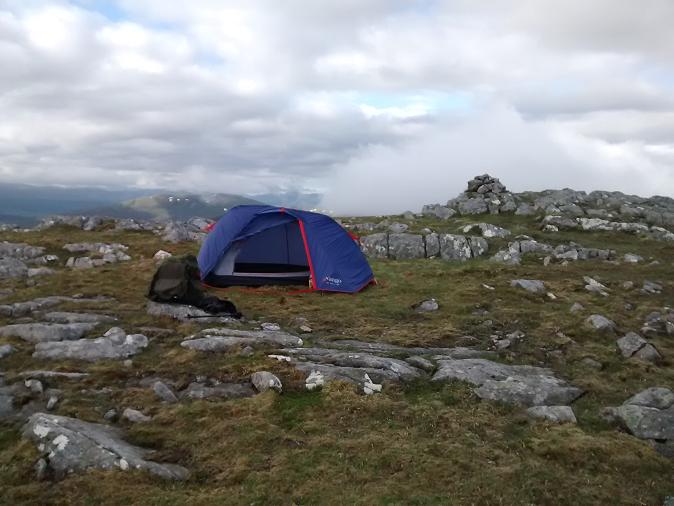 I descended over steepish ground to the track by the Alder Burn and walked down to Alder Bay arriving at about 11.00 and had a swim in Loch Ericht. This was curtailed a bit by the thought that enormous pike may live in that vast body of water and I certainly felt more comfortable doing back stroke. After drying in the sun I checked out the bothy. There were 6 bikes with trailers parked outside and lots of kit in dry bags stowed inside. The most recent party to visit had been a DofE party the day before. I saw that 'Prince Charlie's cave' was marked on the map as being nearby but after searching in vain for about an hour and a half I gave up and walked up to the bealach between Ben Alder and Beinn Bheoil where I had lunch. There were good clear views over to Beinn Bheoil which I would have paid good money for on my last walk here in 2012 when the mist created serious 'navigational challenges'. It is of course all totally obvious in clear conditions. Met my first 2 walkers of the day descending including themunrohunter.org who was 100 Munros into a summer round which he was hoping to complete for charity. They pointed out a party of 6 RAF walkers who were the occupants of the bothy and whom I followed up and around the rim of Garbh Coire and up to the summit. 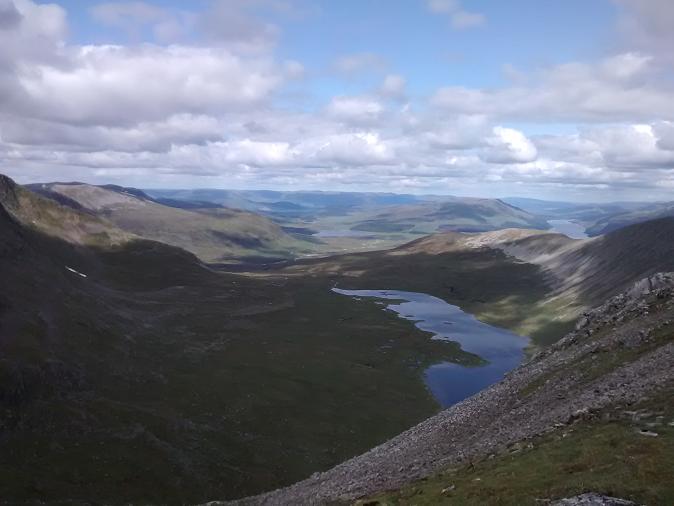 Heading over in the direction of Beinn a Chumhainn again I stopped for a brew around 16.00 and then headed down to path which leads up to bealach between Ben Alder and Sgor Iutharn. Met 2 cyclists pushing bikes up from Culra and heading towards Loch Ossian YH. On my wish list for this trip was to go up Lancet Edge. I figured I had enough energy left for this and a camp on the Geal Charn plateau would put me in a good position to easily reach the remaining Munro objective tomorrow and then Dalwhinnie for the train back in the evening. Lancet Edge was a bit of a challenge with a heavyish pack and a stiffening breeze but I reached the Munro top at around 20.00 and was rewarded with fantastic views with the shadows lengthening out over the ground towards Loch Ericht. 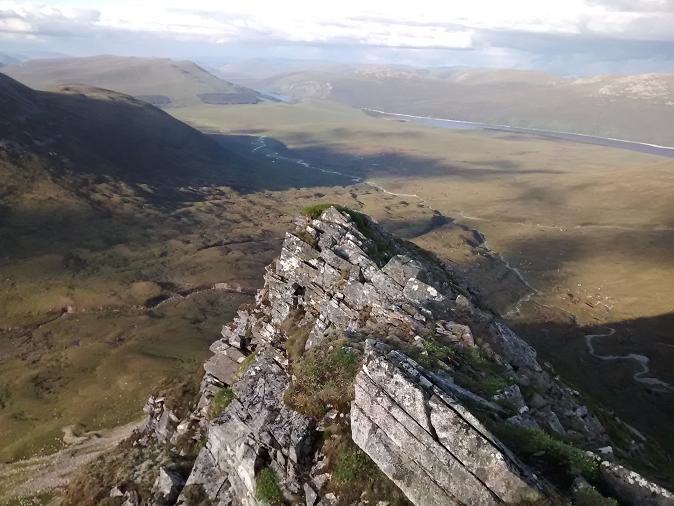 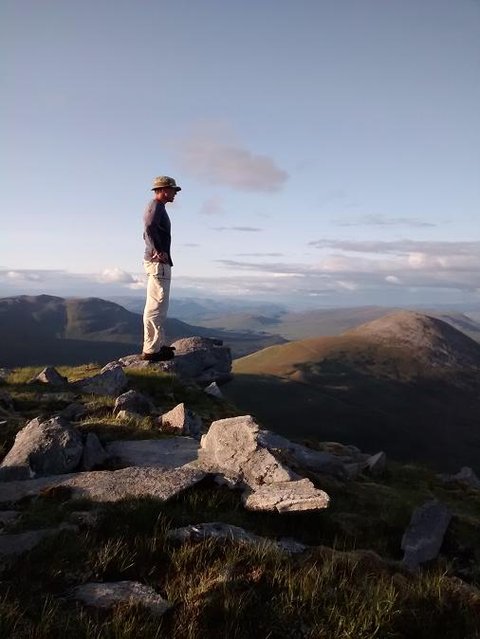 On reaching a suitable spot on the vast prairie which sits atop Geal Charn I set up my tent and then wandered over to the summit. 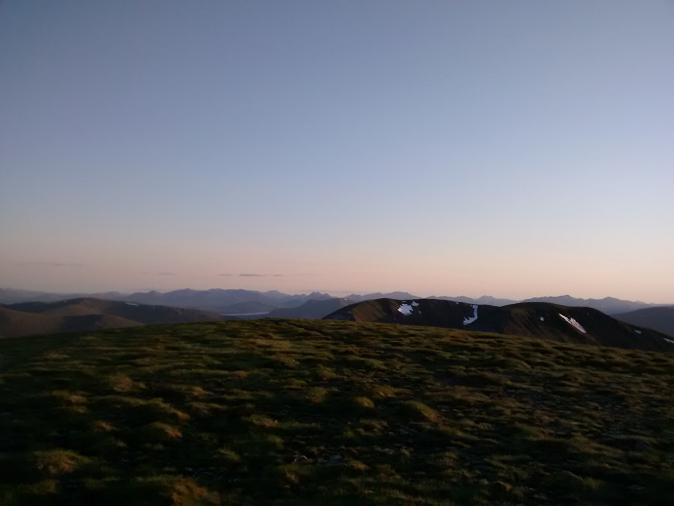 Amazing views of sunset and some more curious deer. More of Ainsley's finest for supper and then a good sleep.

Day 3
I was up before 6 and it was a misty morning which I guessed might not clear quickly. I was therefore under way by 0730 and proceeded onto Aonach Beag's summit and then descended to Meall Nathrach and was pleased to see the mist clearing by 0830. Down to Allt Cam where I filled up my water bottles and did last night's washing up! I then followed the footpath up to Lochan na h'Earba past the ruin at Lubvan stopping for swim on the way at a picturesque waterfall with a deep pool which was too good to let pass! 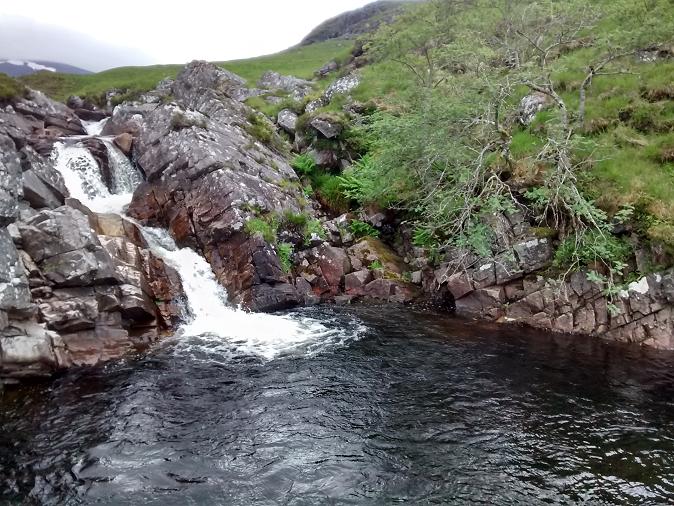 I headed up the track to Bealaich Leamhain turning off the path to climb to Creag Petridh on a clear track. After lunch on a windy summit I descended back to the bealach meeting one other walker and then headed down on lochside path to Loch Pattack reaching bridge over Allt Caol Reidh about 4. Had tea in the woods by side of track where the first midges of the trip were encountered. Saw 2 other walkers pass by also heading for the station at a brisker pace than I could manage. As the wind was getting up I stuck to track rather then go up and over The Fara which seemed a more attractive option than the lochside path. It took about 2 hours 20 mins to reach station and I arrived there about 1920. Two hour wait for train due to having purchased an 'Advance' ticket and Dalwhinnie was all shut up! I watched the 2 other walkers depart on the 1930 train enviously! So I brewed some tea and ate most of the rest of my food.Train on time, changed at Perth and was back in Embra by midnight.


rann-dalw.gpx Open full screen  NB: Walkhighlands is not responsible for the accuracy of gpx files in users posts

I did a very similar trip about 5 years ago.. Didn't get the braw weather though

Thankyou. I was very lucky and was pleased how it all worked out with minimal planning!

I did a very similar trip about 5 years ago.. Didn't get the braw weather though

It was memorable! On the whole Ben Alder has been more than kind to me. It is a great place!