our_route.gpx Open full screen  NB: Walkhighlands is not responsible for the accuracy of gpx files in users posts
It’s sadly came to the time when the years of trudging in cloud over pathless tussocky grass and bogs, following a fence to a wee pile of stones masquerading as a cairn (!) all while the elements are chuckin it down, come to an end.
Only kidding, the round of the Donalds was fantastic.

Yes final Donald and tops time.
Seems a lifetime ago – 30 years ish – since the days when the ticks started to appear in the Tables, starting on Tinto and in the Ochils

So its’ Uamh Bheag and its' Top Meall Clachach.
Friends Gus,Martin,Iain and my dog Hamish set out from the usual Church car park in Glen Artney, then it was along the road The weather was excellent at this time, no sign of the rain forecast for "East of Callander between 10am and 4pm"

We then arrived at a bridge over the river and turned left through a gate, then along a faint path by the side of the river. Muddy in places. When Allt Ollach is reached turn uphill to reach bridge over it. After that it's the very steep pull up Am Beannan, but the best of this is the height gained quickly .Once at top, time for a good bit of loafing about and having some lunch. 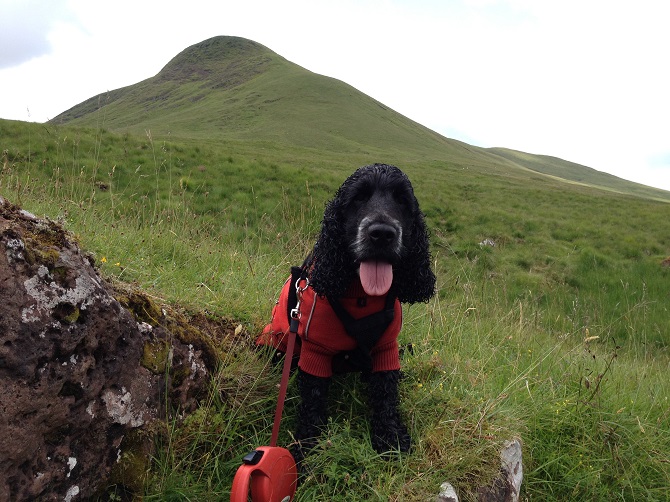 Hamish with Am Beannan behind Then it was on over faint path to Meall Clachach.Beware, the big boulder at the fence on this hill isn't the true summit! Almost missed it and had to climb fence and head a bit further West to bag this Donald Top. Hamish and I, destination behind

So then it was time to head towards the Last Donald.
As I walked up the slope by the fence my mind went back to Donalds climbed over the last few decades: Walking the Ochils and their superb steep sided glens, going over peat hags and heather in the Moorfoots and the awesome walks in Galloway, especially the Loch Enoch circuit.
So Hamish and I arrived at the top first , followed by Gus, Martin and Iain , A wee dram of malt was consumed to celebrate. The views from this hill are awesome over central Scotland. I could see as far south as the Campsies, West to Arran and North to Ben Lawers and other Munros on the Southern Highlands.
It had taken 6 hrs to go up and down but that included a lot of loafing about. The rain came on as photos were taken but didn't spoil a superb walk. Callander and the Trossachs The guys at the top with the famous Herman Munster Hamish and I at top

Congratulations on compleating the Donalds and their tops

Like you I've certainly enjoyed the Donalds, particularly over the last couple of years. They provide a good walk and a great alternative to long drives north in search of Munros and Corbetts when perhaps the weather isn't great

well done great walk this one

Thanks everyone. As far as meall clachach true top is , the point at the big boulder by the fence does not match the grid ref in Donald's tables. You need to climb fence and walk for say 50 yards. The top is obvious in clear weather, although until Martin pointed it out I hadn't checked the grid ref on sat nav.

Congratulations on your achievement

A lifetime of memories

Congratulations and a good choice to finish on.

I remember the climb up Am Beannan well - pretty dam steep but at least it doesn't go on for too long.

Great pics of your day.