When I first started bagging hills, I climbed a few Corbetts and Grahams before moving on to Munros. Kevin, who was already an experienced hill-goer when we met, wanted me to adjust to Scottish mountains beginning with the easier stuff. Later on, we concentrated on Munros and used lower hills more as winter ascents or for semi-good days. As time passed, I suddenly realised I was on 50 Corbetts, then on 80 (last year in November) and suddenly, the triple digit is only a few steps away! I never planned to get that far!
Some of the best Corbetts we bagged required long walk-ins, rough terrain, steep slogs and tricky scrambling. The two hills we climbed on July the 5th don't fall into any of above mentioned categories and most folks do them either as a sidekick to neighbouring Munros or as shorter trips in winter conditions. Which doesn't mean they can't be enjoyed on a sunny summer day!
We had already done all Munros east of Devil's Elbow, from Mount Keen to Cairnwell, so the Corbetts were left as awkward outliers. Driving all the way from Inverness to Braemar to do a 3 hours walk up a track wasn't really worth the cost of petrol, so we decided we were going to squeeze two hills in one day. The original idea was to do Creag nan Gabhar and Morrone, the latter was eventually swapped for Beinn Gulabin. This report covers the first of the quickies

If Creag nan Gabhar is the only target for the day, it's worth to do a circular (as WH suggest), we opted for faster up-and-down ascent, to save time for the second walk.

our_route.gpx Open full screen  NB: Walkhighlands is not responsible for the accuracy of gpx files in users posts
Auchallater car park has a ticket machine, but hard as we tried we couldn't make it work

It just spat all coins back! I checked other cars and none of them had parking tickets... We've been lucky with parking fees recently, last week we visited Dog Falls car park and that machine was broken, too (and I swear we didn't break it!). Maybe it's Black Panther's Pay & Display Curse???

The broken machine and the road to Callater: 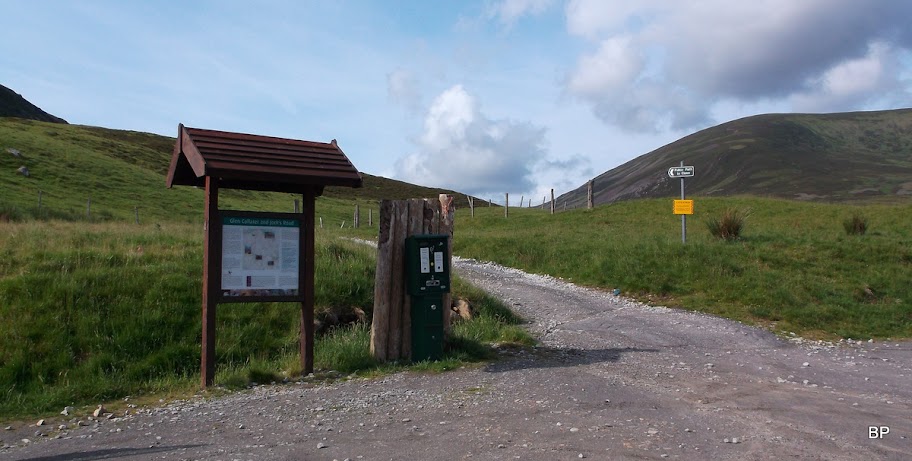 We have climbed two of the Whitemounth Munros from this side, so we had explored Glen Callater and I knew it was a lovely place

Many people must have come just to walk in the glen as the car park was full. But we managed to avoid crowds and strolled along the river, listening to the humming sound of water... 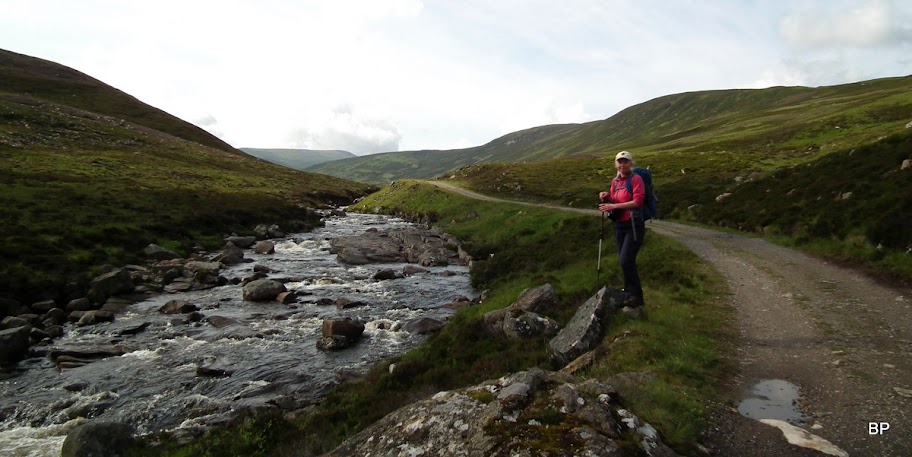 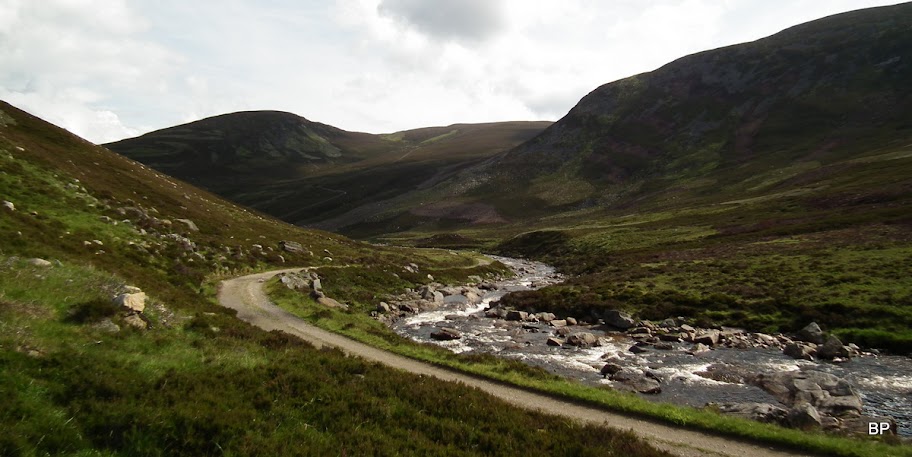 A track zigzags up the eastern slope of Sron Dubh and soon we gained views to upper Glen Callater: 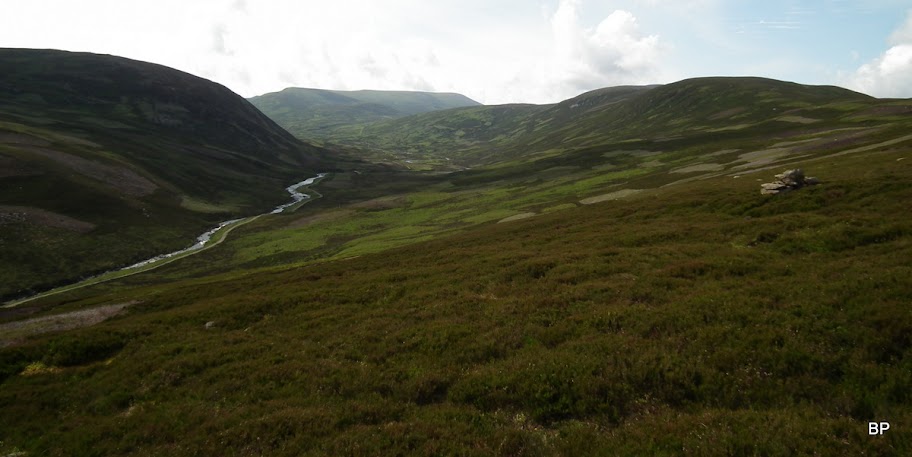 We reached the first top, Sron nan Gabhar easily, our target Corbett seen plainly in front of us. This would be an ideal hill to enjoy in five inches of snow, if we happened to live closer... 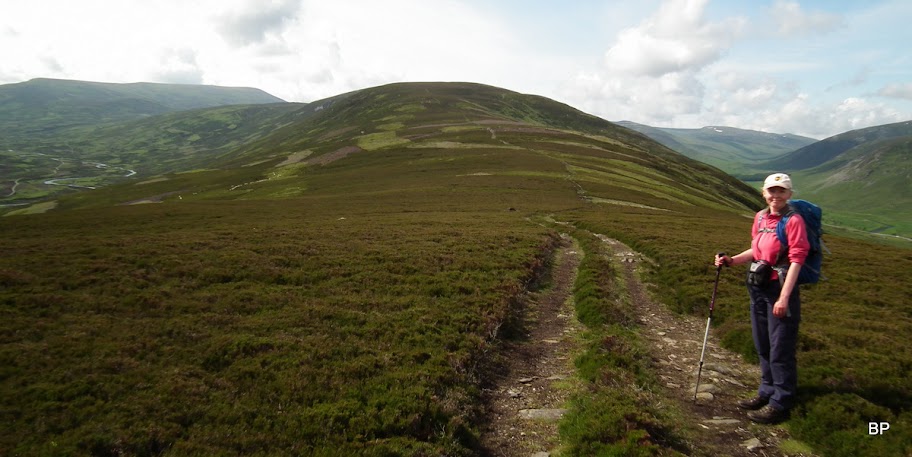 At the moment, the best panorama was behind us, to the north, where Ben Avon proudly presented its tors. Having just visited Mighty A'an, I was still under its spell!

The track/path is obvious all the way to the summit, the total ascent of only 500m. Across Glen Callater, the long, bumpy ridge of Meall an t-Slugain, which must be a Corbett top of Carn an t-Sagairt Mor:

Upper Glen Callater with Loch Callater sitting in the middle and Lochnagar on the horizon: 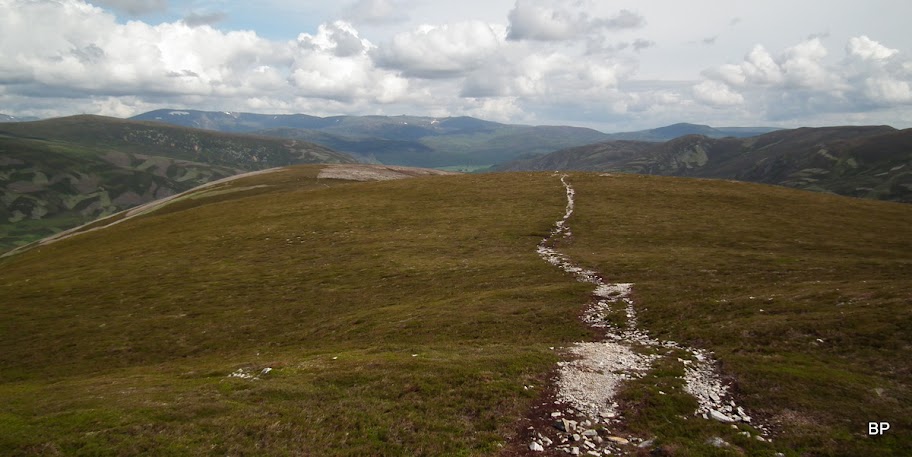 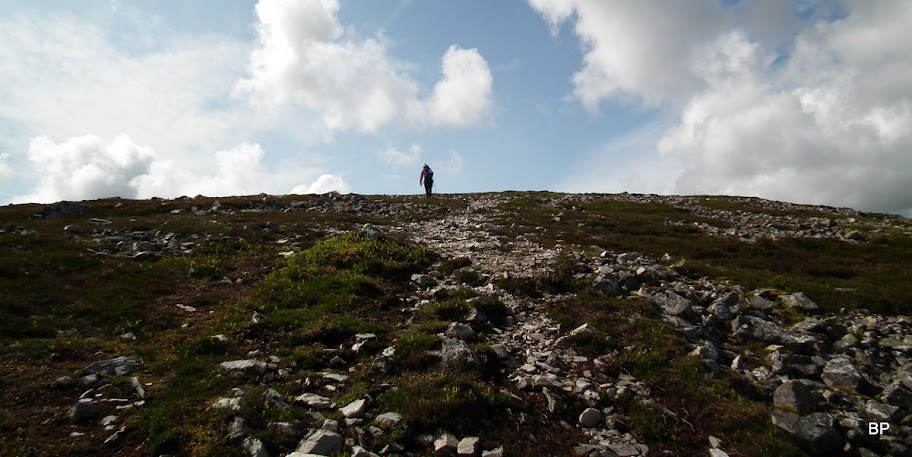 The summit is a large-ish plateau with two cairns, we visited both though the first one was higher according to Kevin's GPS. Lucy spent most of the time sunbathing on the rocks

happy to have bagged her 6th Corbett - she is a fully qualified mountain lamb now! 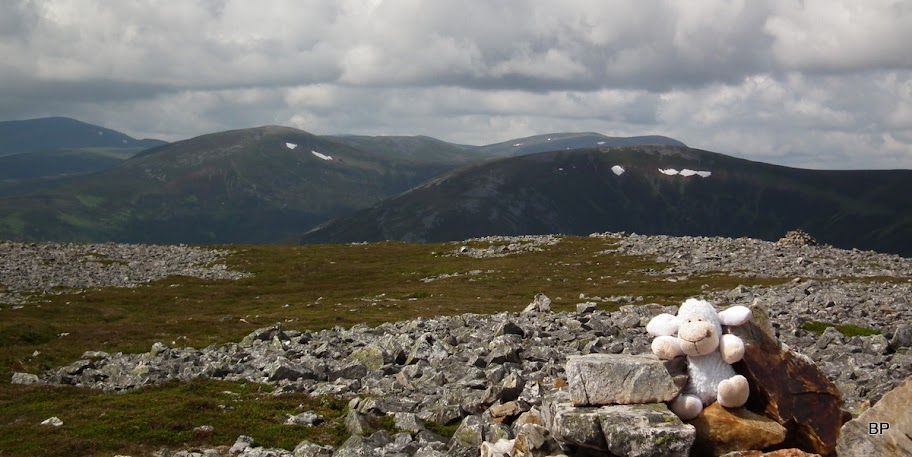 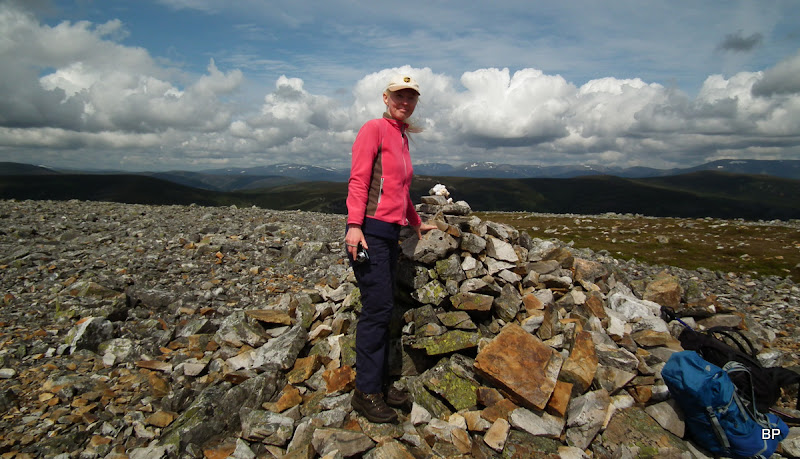 We lazed about on the summit for quite a long time, Kevin took far too many photos, just a few to prove this is a great viewpoint. The Cairngorms on the horizon still held a few scattered patches of snow: 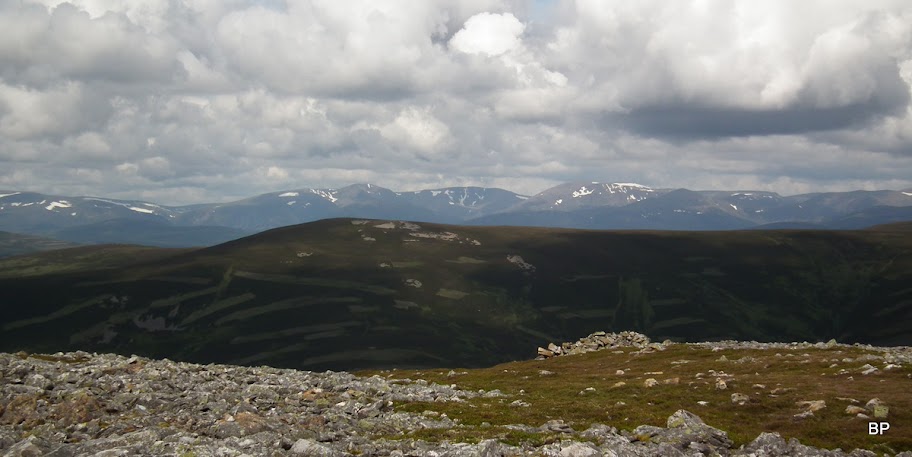 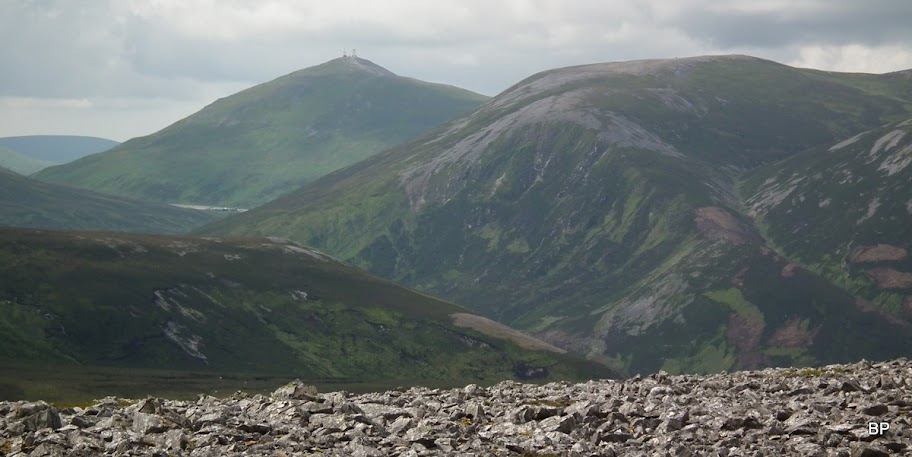 Kevin and the views to Cairnwell Pass:

Somebody up there likes me 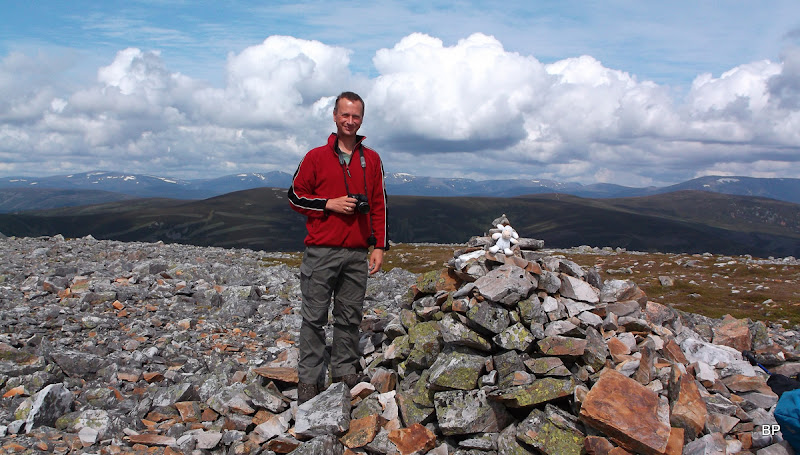 On the way down, we discussed which hill should we tackle next and agreed that climbing Beinn Gulabin made more sense. "I may be bothered to visit Braemar to climb Morrone in winter conditions, especially if we do a nice circular" Kevin said "I definitely won't be bothered to drive all that distance to bag Gulabin!".
We returned to the car park in less than 3 hours and drove across Cairnwell pass to the second target. Kevin forgot to switch off his GPS while driving, so the original GPX file is showing some ridiculous statistics and couldn't be used for this report

Summing up, a lovely short walk, and I'm sure the circular would be even nicer. Shame we live too far away from this area to explore these round hills in winter conditions.

The second part of the day in a separate report.

It's a nice walk, especially when combined with Morrone (if you get a good day the views from this hill looking north are brilliant).