Having climbed Creag nan Gabhar earlier that day, we still had enough time to add another Corbett to our tally. Ben Gulabin is not a big, inspiring mountain, rather a low outlier of Cairnwell trio (which we had already bagged). It doesn't really have much to offer when climbed by itself, apart from nice views. Another hill to save for winter, if you live nearby. We were glad to throw it into our basket as an addition to CnG. Two Corbetts ticked - mission accomplished!

We used the obvious route, up a wide track below the steep crags of Carn Dubh, past the sad remains of Gulabin Hut and then up more eroded path to the top. We met quite a few tourists, some of them ill-equipped (sandals, high heels

), but this is not exactly Mount Everest so all mistakes can be forgiven

Track_BEN GULABIN.gpx Open full screen  NB: Walkhighlands is not responsible for the accuracy of gpx files in users posts
The trickiest part of this route is finding a safe place to park. We took the last space on the grass by the gate. Otherwise, it's easy to park in Spittal of Glenshee and walk along the road to the entrance of the rough track: 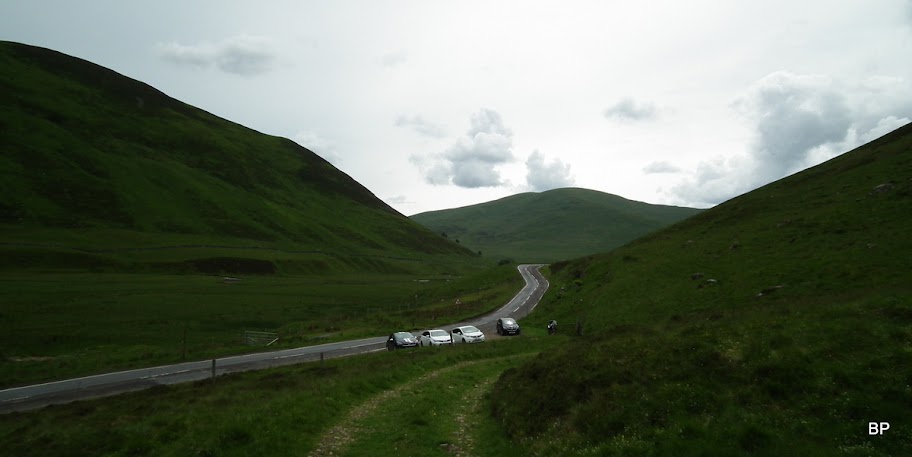 The way up looked friendly and easy enough for a panther: 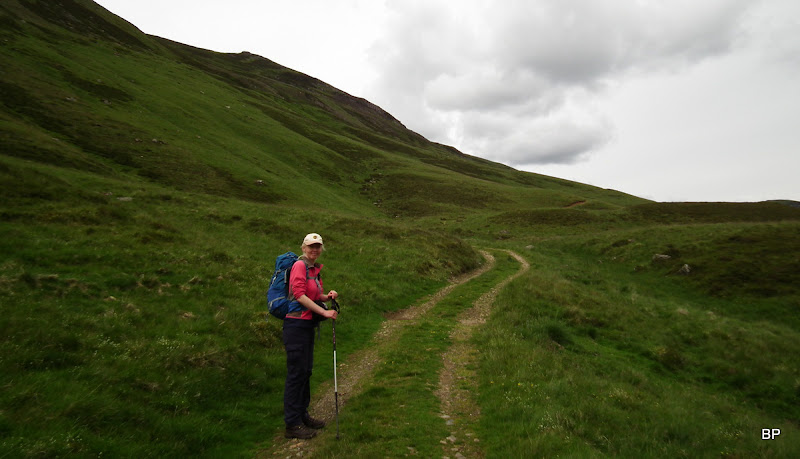 Gaining height, we enjoyed views down to the glen, all green and "juicy": 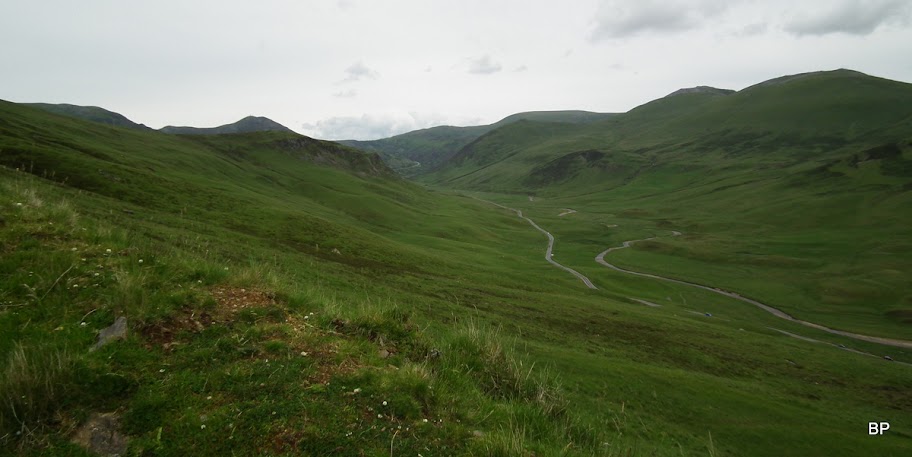 The track makes for fast going: 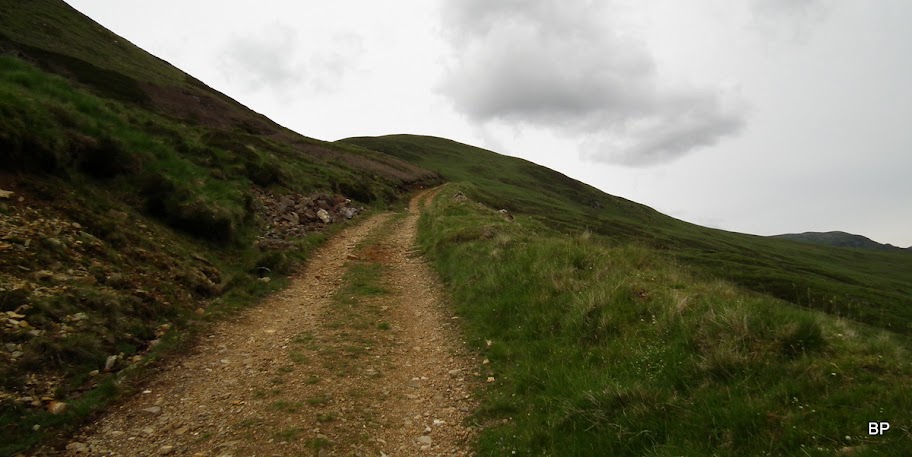 We reached the crossroads and turned left to continue on rougher path up the final slopes: 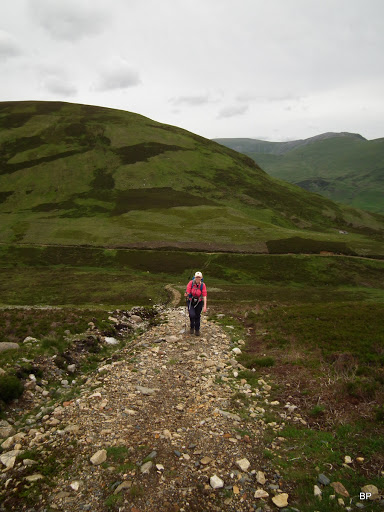 Glass Maol as green as it could be

We did it in winter and it was very white then, I remember running down the steep side of Creag Leacach, snow up to my knees, meowing like crazy, enjoying the moment

Today was a different kind of pleasure on the hills - strolling up at a lazy pace, sinking in the beauty of the rollin-rollin landscape... 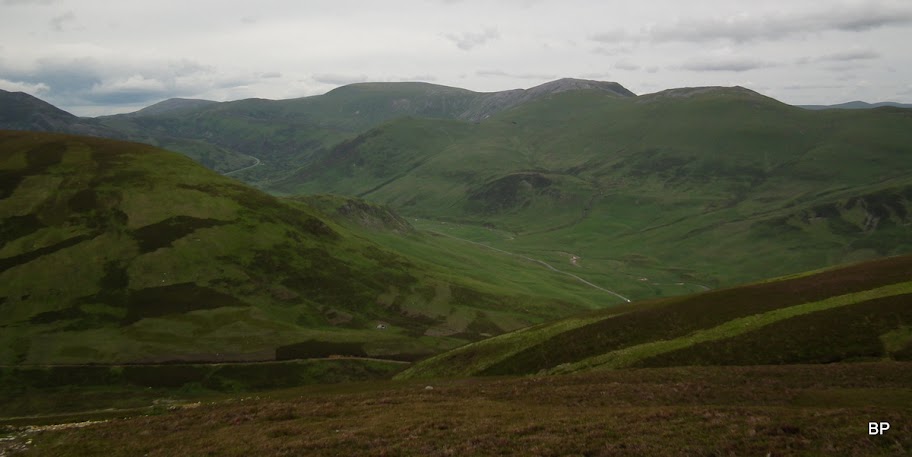 Corbett No. 97 with very little effort! Lucy bagged her 7th 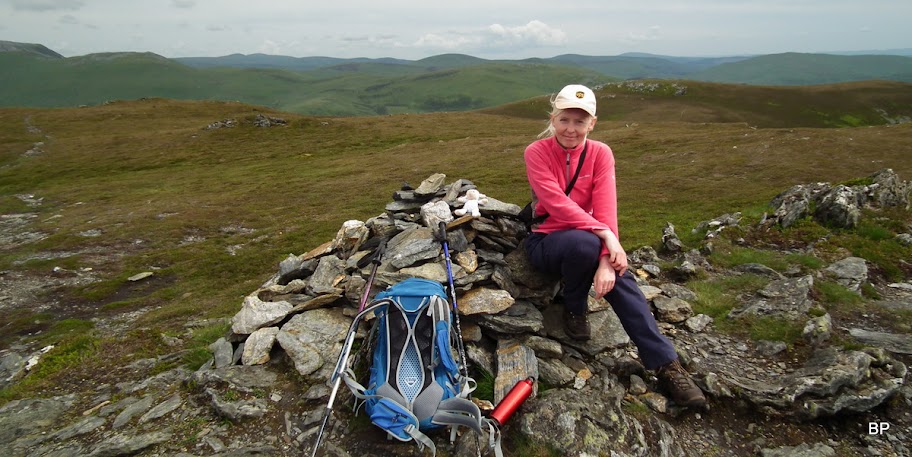 There was no need to hurry so we had a picnic on the summit, drinking tea and munching cookies. I annoyed Kevin by bluntly unwrapping a bar of Toblerone (honey, almond and nuts chocolate

). The poor man could only watch (chocolate contains lactose, so it's forbidden!)... He accused me of being cruel. If you have a problem, I said, you can kiss my Toblerone!

He busied himself with studying the map... 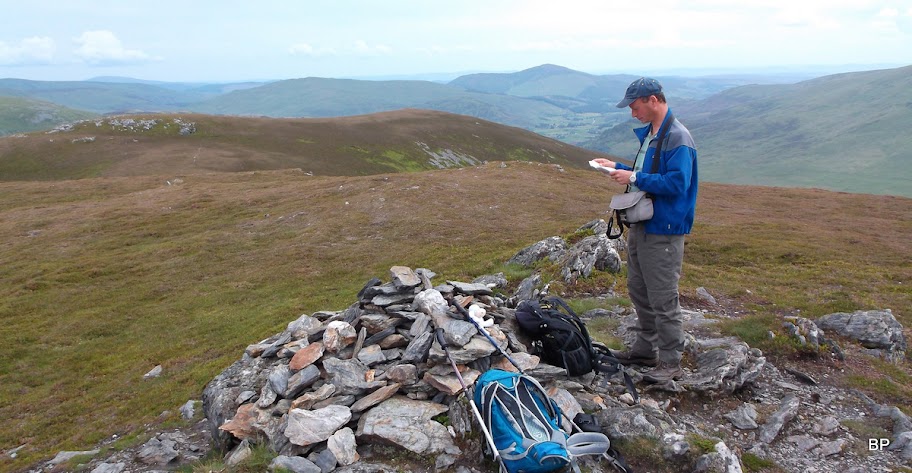 A few photos from the summit. Ben Gulabin is a good viewpoint, the best vistas to Cairnwell pass and north-west to Glas Tulaichean:

View south-west, the prominent mountain to the right is probably Ben Vuirich:

To the south and east, a tranquil, quiet afternoon... Mount Blair and Duchray Hill, two local Grahams, dominate the view:

The northern pano. I spotted Carn Bhinnein, an intriguing pointy top (to the left), I remember admiring it from below, from Gleann Taitneach, when we were walking back to Spittal of Glenshee after climbing Carn an Righ. We were soaked to bones... 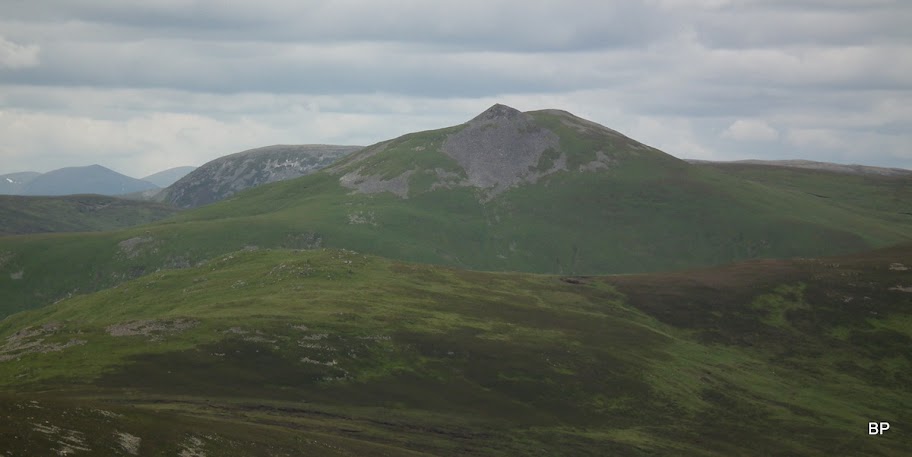 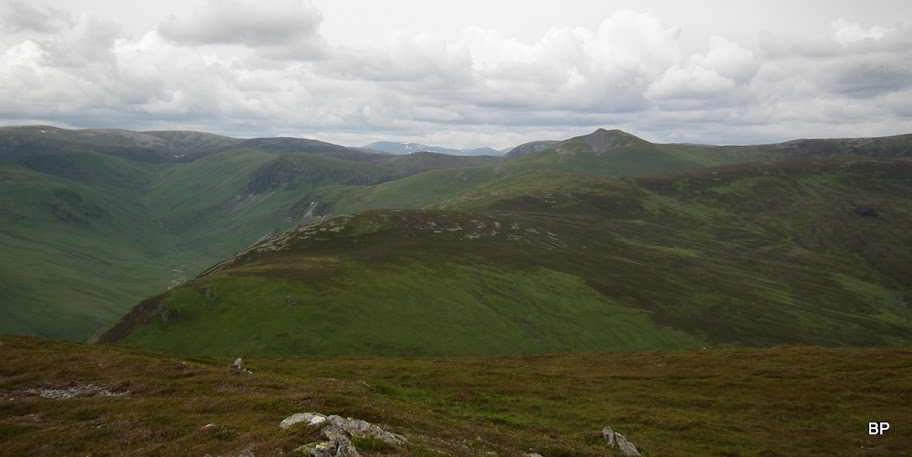 We returned the way we came, down the eroded path to the more comfortable track. All the tourists have gone by then and we were alone on the hill, enjoying a nice stroll back to the road. Even at a lazy pace and with a picnic on the summit, it took us only two hours to bag this Corbett!
Technically, we still had enough daylight to pop in to Morrone, but Kevin wanted to be home at reasonable time (he is overloaded with work these days and has to start his days half an hour earlier to avoid backlog). Eventually, we decided to leave Morrone for another visit, we still have Carn na Drochaide and Sgor Mor on to-do list, so any combination of these hills, plus local Grahams, is possible.

In my next post I'm moving to Glen Roy, for a visit to two wet yet very entertaining Corbetts.

Hi BP - this was an easy one for you.

It's been a couple of years since I was up there, I dropped down off the top on the main track then when I got back to the junction of paths I turned left and had a wander up towards the Cairnwell - nothing special but it extended the walk by a few miles.

There were other sources available - Google "lactose free chocolates"

I hope yous are both recovered