Strange spot to shelter on summit of Morrone

Strange spot to shelter on summit of Morrone


It was a last minute decision to climb Morrone. We hadn't planned a hill that day but the dogs needed a walk so we thought why not? We started in the centre of Braemar and it's the only time I can remember starting walking up a hill from the place where we were staying. 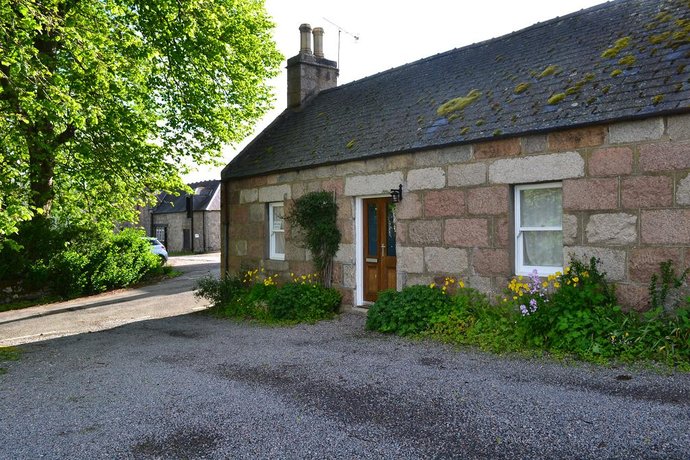 View from our window of Morrone beyond the trees 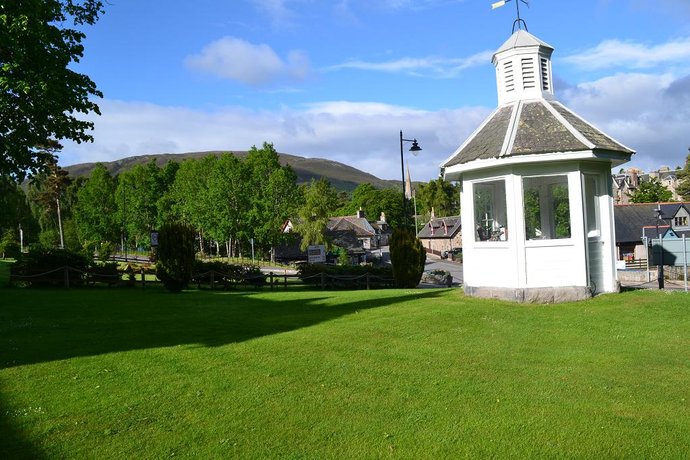 We crossed the road and followed the road for Linn o' Dee passing the Bothy Cafe with its home-baking and free Wifi and then the boarded up Fife Arms Hotel which according to a local is being refurbished into something swankier than it was before but will be closed for the Braemar Games this year which will be a problem for accommodation. 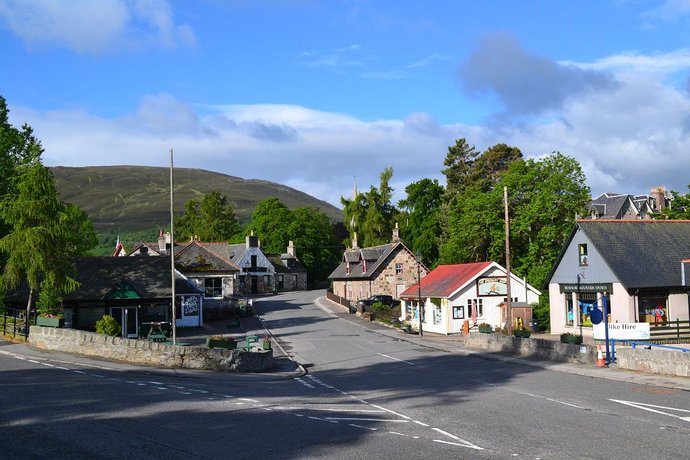 At the mini roundabout we turned left then took the right fork up Chapel Brae. The first three photos were taken a couple of days after we climbed Morrone but the day we set off was dull and overcast - and we hoped it wasn't going to rain! 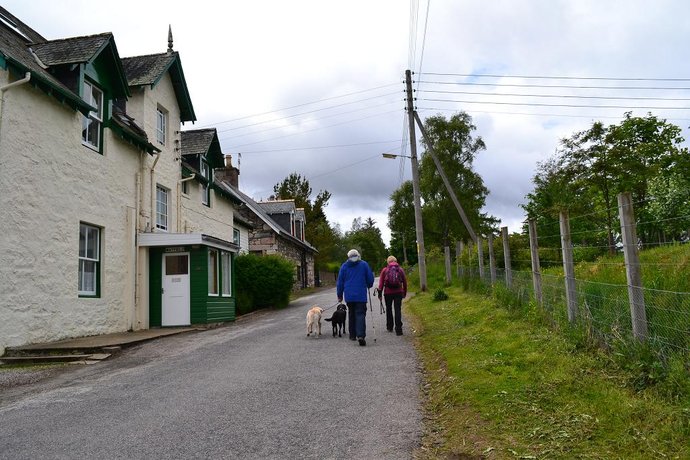 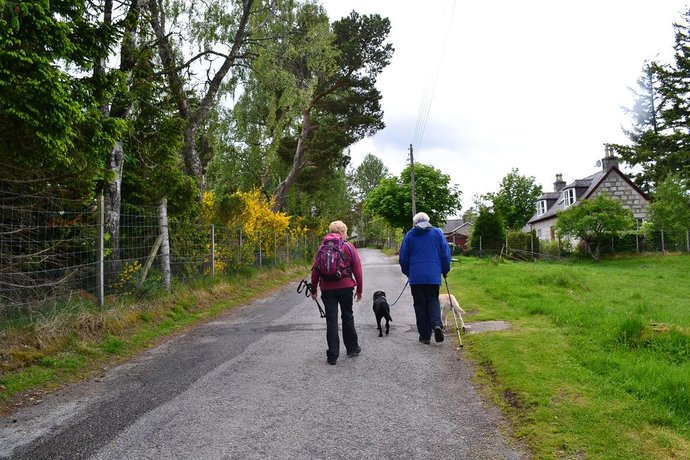 We passed the car park and the duck pond and kept left at the track signed for Morrone.

Duck pond and Morrone beyond 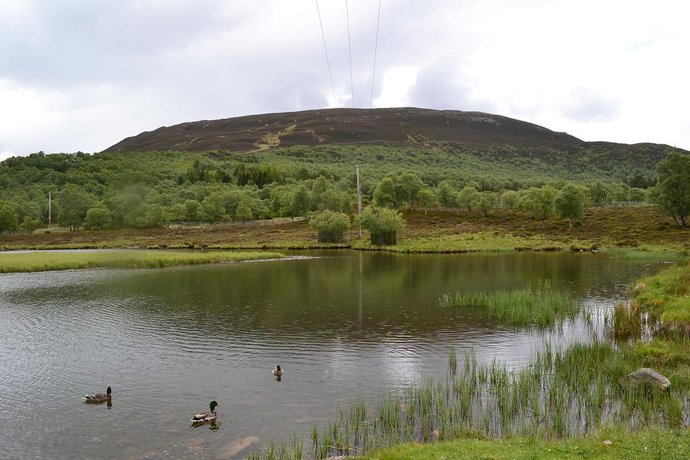 Dogs patiently waiting while we faffed with cameras 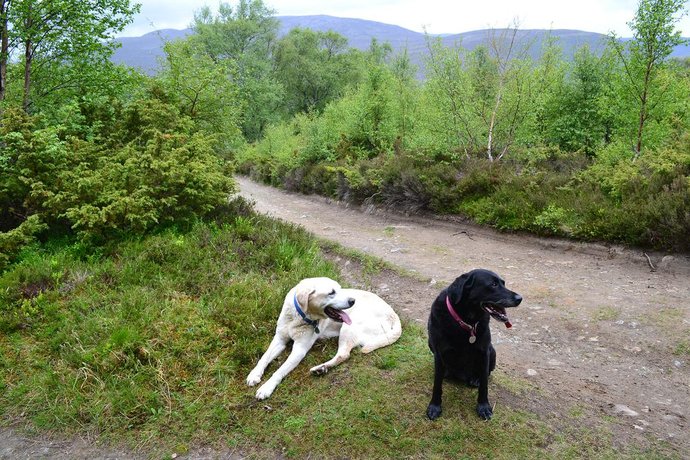 Path narrows through the birch woods 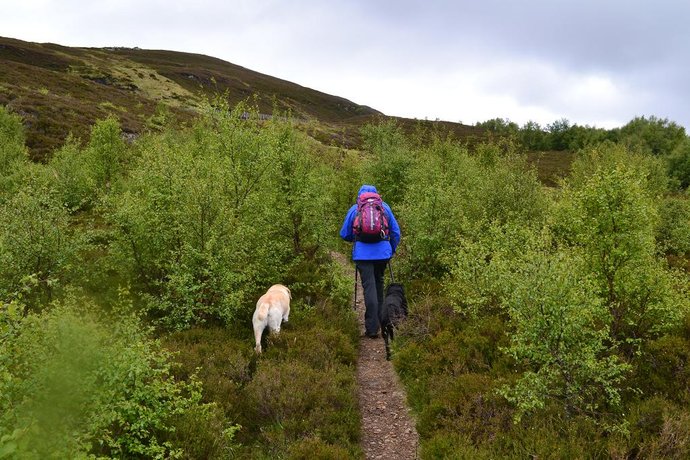 Braemar from lower slopes of Morrone 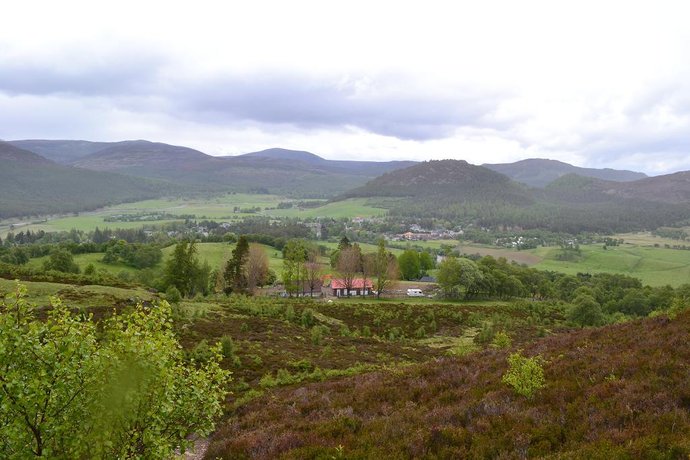 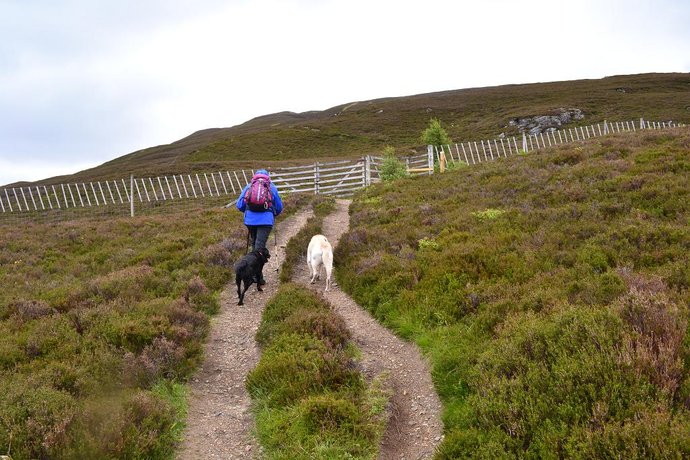 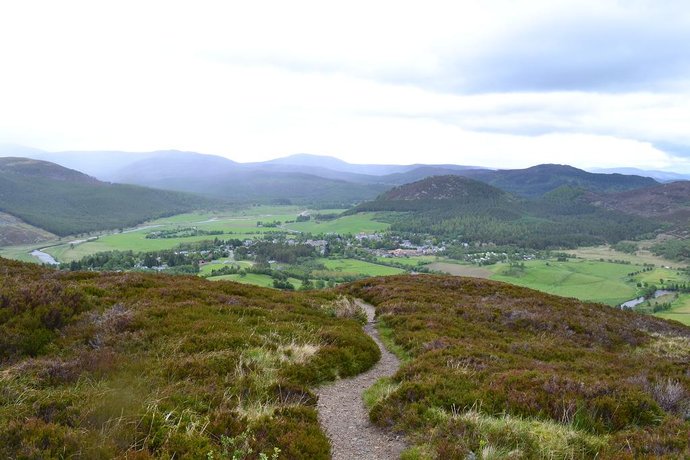 The dark clouds had turned into rain (M's pic) 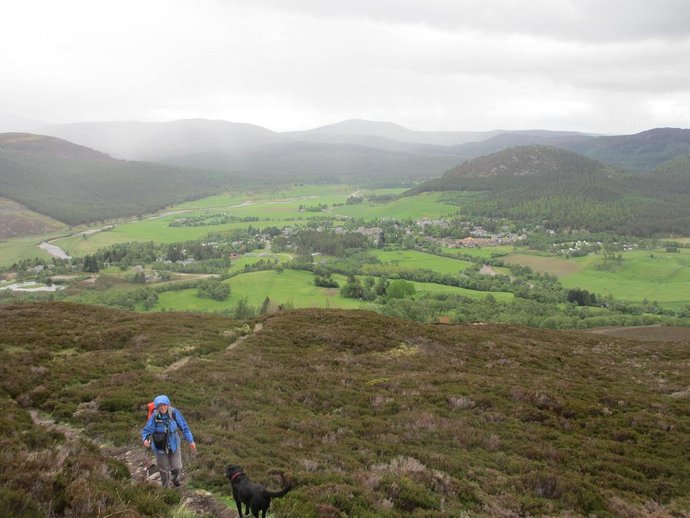 It was one of those times when you make the wrong call on whether to stop and put on the waterproof trousers. You know the scenario, you have them in the bag and what's the point of carrying them if you're not going to use them.... but the rain is just light and maybe it's just a passing shower so your damp trousers will soon dry off etc etc. Except that today you weren't in proper hill walking mode - just dog walking mode - and the trousers you have on are absorbing every drop of rain so that by the time you know you should stop and pull on the waterproofs it's way too late and all you'd be doing is trapping all that wetness... so what's the point now? 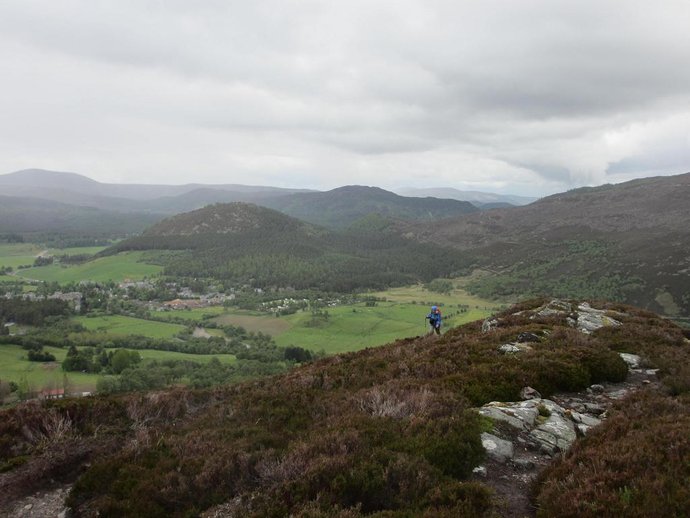 The light rain turned into heavy rain and by the time we reached the top was falling as hailstones and I was soaked from the jacket down - not quite what we had hoped for on midsummer's day!

Cold and wet at the top 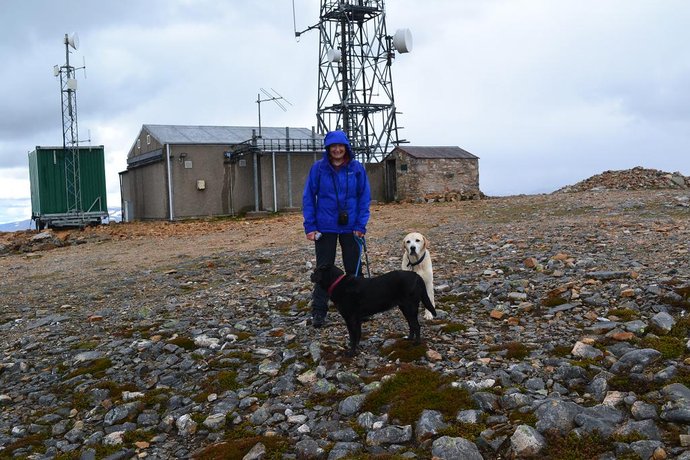 Leaving the cottage at lunchtime but without having any lunch meant we were by this time (with apologies to mrssanta) cold, wet and hungry. But with hailstones bouncing off our heads I don't think I've been on a summit less appealing as a lunch spot! All was not lost however. On closer examination of the buildings round the radio mast there was a doorway behind a wall with a roof over and just enough space for two drookit wifies and their dogs to hunker down for a cup of coffee and a sandwich. 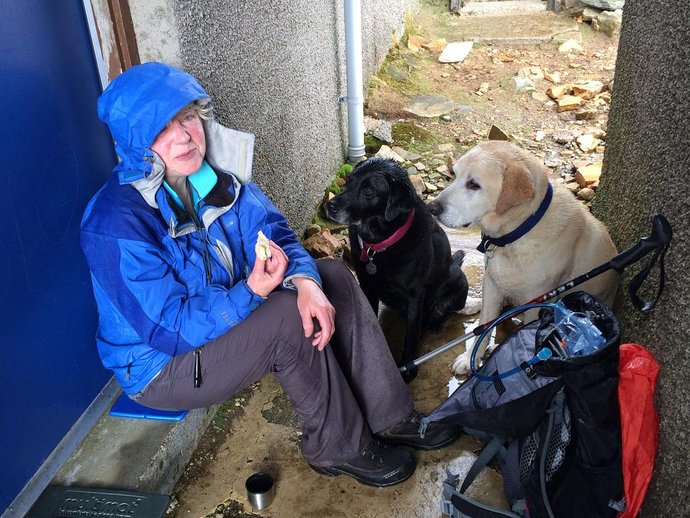 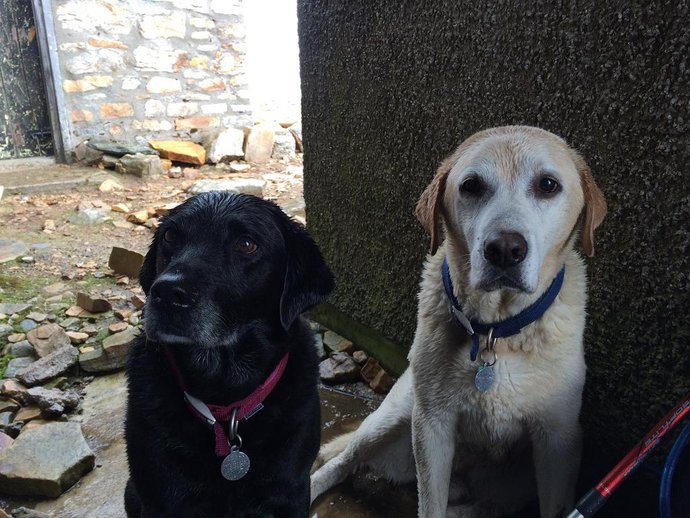 It was miserable and dreich so we didn't hang around but continued on the circular route suggested by WH. 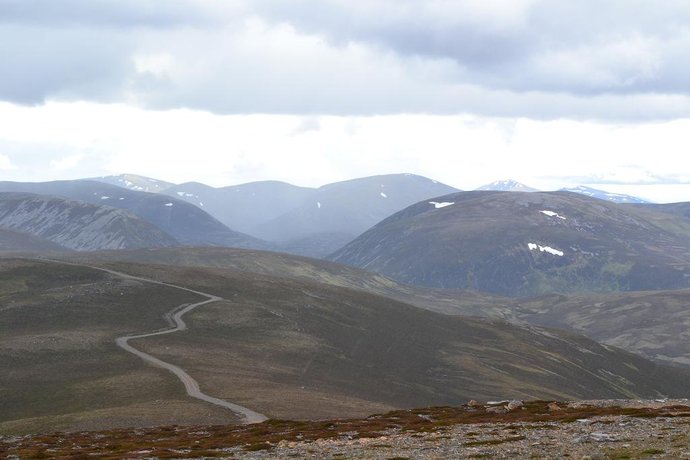 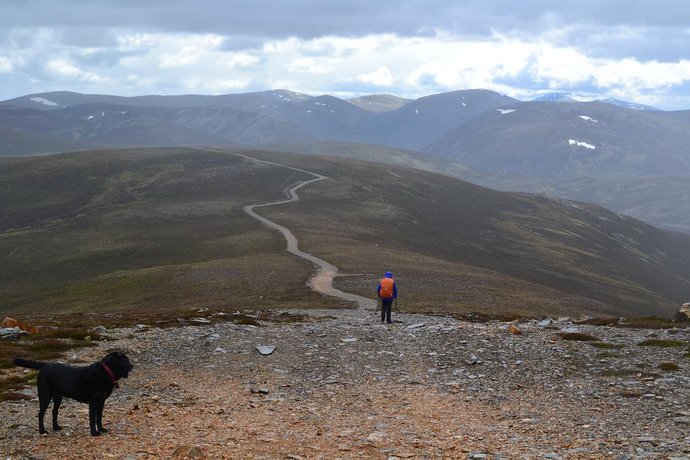 The track meanders gently down before rising slightly to a cairn. These old dogs have bagged so many hills that when they reach a cairn they automatically go into posing-for-photo-beside-the-cairn mode so I didn't have the heart to disappoint, even though this wasn't the top of our hill. The thing that makes me smile is the way they get up and walk off as soon as they hear the click of the camera. No retakes for them! Looking back at summit (M's pic) 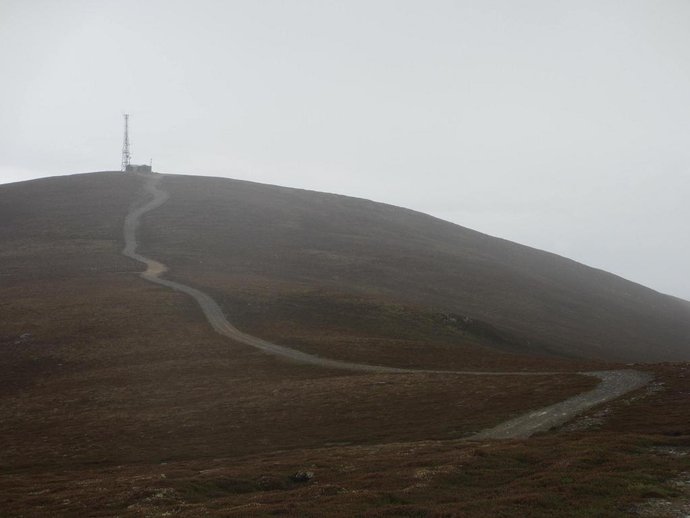 From the cairn the track turns east and descends into the glen. It's a vehicle track all the way. 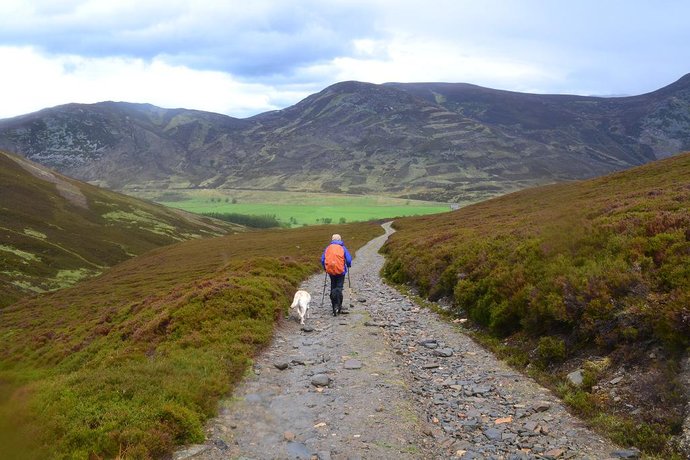 The track leads to a minor road in Glen Clunie, which is an old military road that leads back to Braemar. 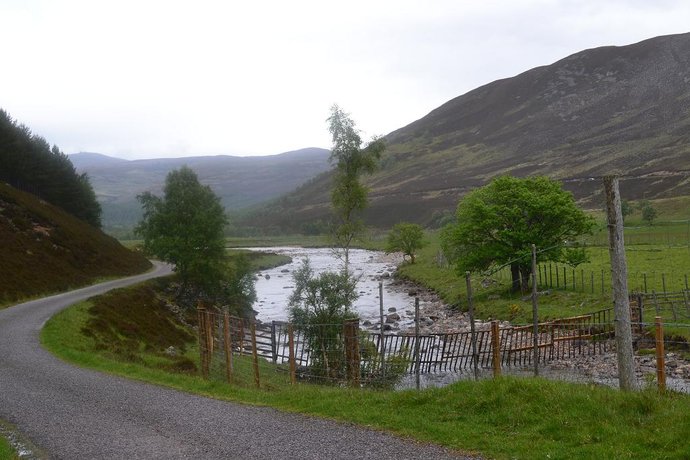 Looking back the way we came beside the River Clunie 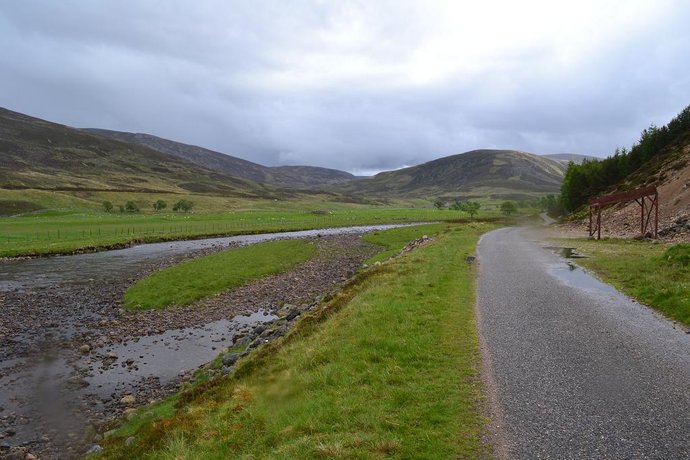 The road passes through Braemar Golf Course and despite the rain there were plenty of folk out playing. It was good to see we weren't the only daft folk out that afternoon! 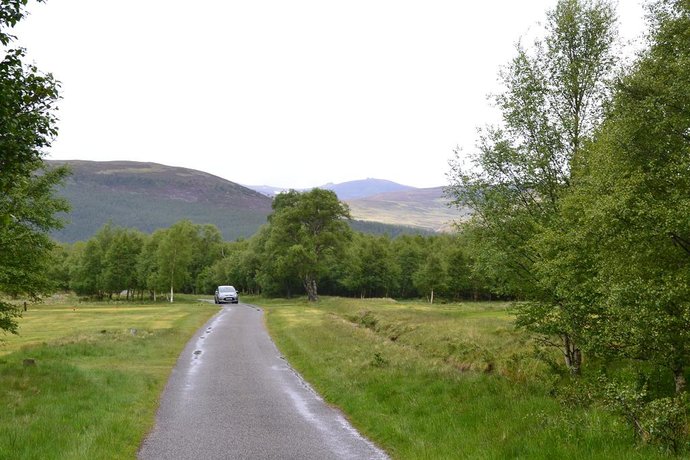 A view of Morrone from Invercauld a few days later 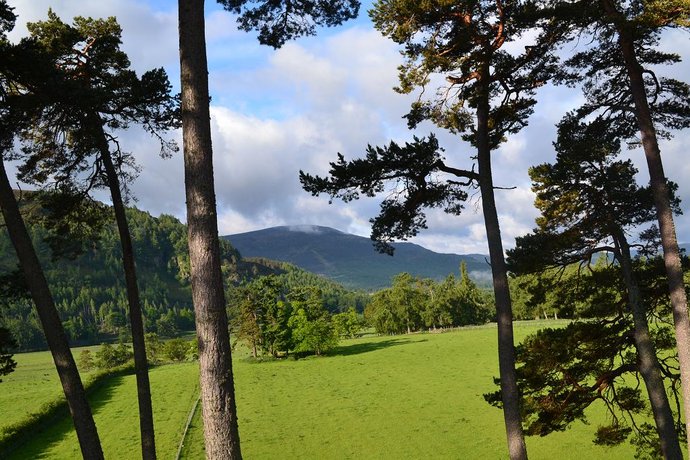 It maybe wasn't the best day for it but even in the rain we got quite good views - and we couldn't have stayed in Braemar and not climbed it!

Shame about the weather, I always think the view from Morrone (looking north) is one of the best panoramas around.

That thing about the waterproofs, I'm convinced I just carry them in the rucksack out of habit as I rarely put them on - same theory, what's the point, when the rain stops I'll dry off quickly.................

Gordie12 wrote:
That thing about the waterproofs, I'm convinced I just carry them in the rucksack out of habit as I rarely put them on - same theory, what's the point, when the rain stops I'll dry off quickly.................

Or you go to the other extreme like I did last week and put them on at the first hint of proper rain and then when it's just a shower can't be faffed to take them off so spend the rest of the day feeling like a mobile sauna.