Another adventure-day yesterday, first Fortrose to see the dolphins (it started raining when I left) then a stop at Drumnadroichit (where it started raining after I left) then a final stop at Glenmore Forest Park for a good walk. The weather was looking uncertain, but we parked up by the beach and followed the yellow route to the visitor centre then the blue waymarkers for An Lochan Uaine. This was a nice walk, one which would be more than suitable for retired doggy but retired doggy wasn't here and was having a rest day with with my aunt. After letting Millie have a swim in the clear green waters of the loch, a quick look at the sky which was looking uncertain, we decided to continue on following the orange waymarkers for Meall a' Bhuachaille.

Having left the woods but not yet reached the bothy, a movement caught my attention - a bird of prey chasing a smaller bird. Everything was happening so fast, the smaller bird was twisting this way and that trying desperately to escape while the BoP matched every twist and turn. The smaller bird made a dash for a tree and must have only just made it to the safety of the branches. The BoP appeared to be a bit peeved off and did some high speed circling of the tree before gaining height and flying overhead before racing low down across the hillside searching for another target.

This one would have to wait until I got home to confirm a definite ID, initially as it was chasing a bird I thought sparrowhawk but the style just didn't match, looking back at the photos it looked kestrel-ish but again the behaviour was completely wrong for a kestrel. Able to view the photos on the computer screen and asking on a bird forum, it was confirmed to be a merlin - my first confirmed sighting of one of these birds!

Heading uphill following the path that turned to the left at the bothy, I kept scanning the hillside for the merlin but I didn't see it again. The weather was starting to close in and I did have a couple of moments where I considered heading back, but it was a good path and we kept heading up. We soon had the summit in sight and headed towards it, a patch of clear sky moving across us at this point so we were in sunshine while the rain clouds and rain seemed to be surrounding us! The wind had picked up here so I took advantage of the shelter to put my jacket on before the descent. Again the path was easy to follow down the hill. Where it forked we took the left path to return to the carpark rather than following the rest of the WH route to include Creagan Gorm. The last stretch of the walk was in sunshine and we stopped off at the beach for Millie to have a last swim before heading home.

In Millie's eyes, a walk that starts with, has in the middle, or ends with a swim is a good walk, a walk with two stops for swimming is a GREAT walk! The merlin - the wide black bands on the tail were the major clue for me that it wasn't a kestrel coupled with the behaviour. Home of the merlin Summit in the sunshine! 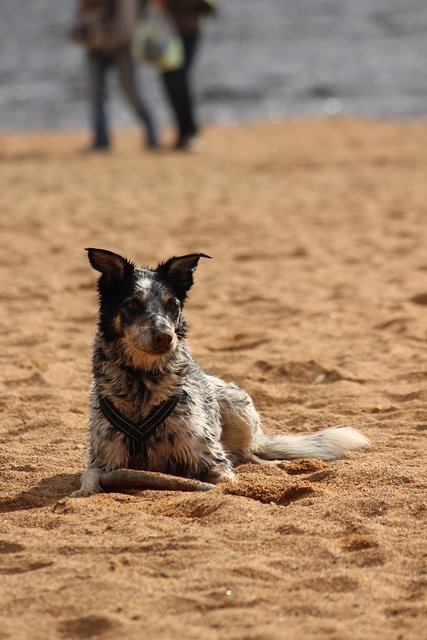 And a last stop on the beach!

You did well to get a picture of the merlin. Fantastic little birds.

Alteknacker wrote:You did well to get a picture of the merlin. Fantastic little birds.

It was hard getting photos, got a few shots though! The speed was just amazing.

Nice hill Meall a' Bhuachaille and nice walk round by An Lochan Uaine.