Beinn Narnain.gpx Open full screen  NB: Walkhighlands is not responsible for the accuracy of gpx files in users posts

Perhaps I and still trying to tidy up my blue pins and decided to get Beinn Narnain out of the way. The forecast wasn't great with a low bringing heavy rain and indeed on the drive through from Edinburgh there were several downpours. There was however some blue sky and I carried on through Glasgow. Been caught out twice now by the car satnav, next time I will type in Stirling and then Arrochar Headed out of the end of the car park and read the spiel about how the last ice sheet 18000 years ago had filled in the gullies and corries but left the peaks protruding above, this would have been an impressive inversion

The intense cold left the distinctive mountain scape of the west of Scotland. There's also a fabulous wood carving and another on the other side of the road.
I looked for the track straight up to Beinn Narnain at the point where WH gpx said it should be, but all I could see was what looked like a very small stream coming out of the undergrowth; this is the actual track

I carried on up the beaten track, was good to get a warm up anyway. Turned right onto the landrover track at the memorial bench to Tam and again searched for the track straight up and eventually decided this must be it It got interesting quite quickly, though it still resembled a small stream for most of the way. Photo below was one of the more interesting parts over a slab, the concrete blocks of the cable car higglety pigglety on the left hand side at this point 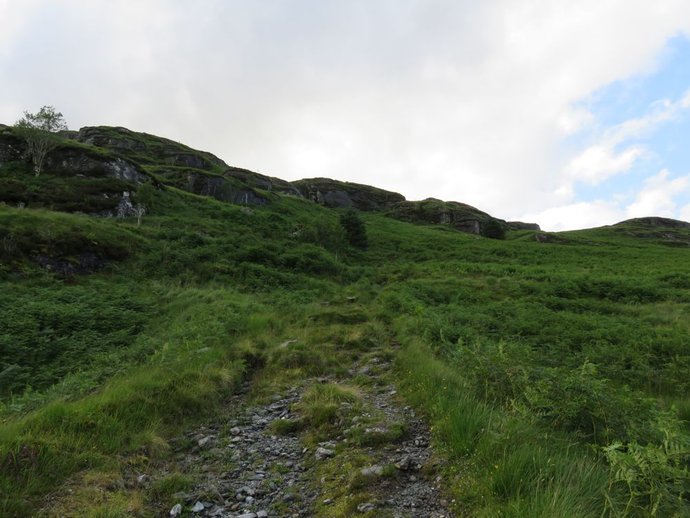 In fairness it had been raining heavily during the earlier part of the day and it hasn't been a great summer. Onwards up several sections of what I would term grassy shelves although suspect these are the notches of the name Beinn Narnain "notched hill".
It's all quite tame to start with really along a well defined path until you get onto one of the notches and a nice although easy scramble up this slab; the path got drier the higher I went... and the ridge round to A' Chrois with Ben Vane and Ben Vorlich poking there summits up behind. but not to denigrate it in anyway, it was interesting, I thoroughly enjoyed it and there were times when I was definitely paying attention Got to the top hoping for spectacular views, but sadly the clag was coming and going. Oh well I'd been lucky and there hadn't been any rain 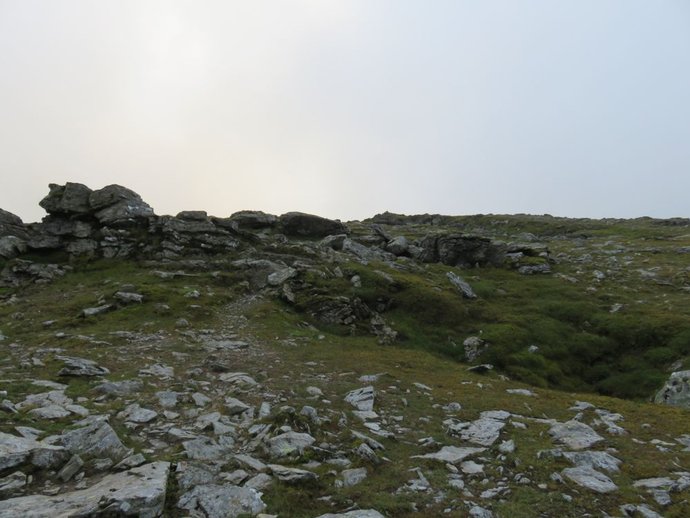 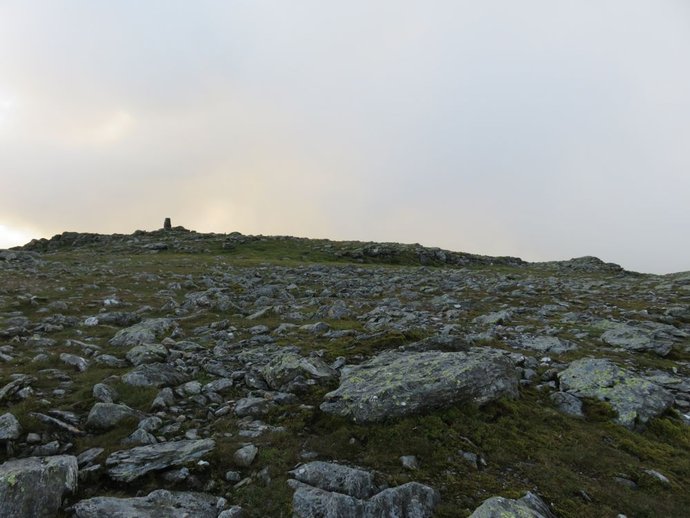 I hung around on the top for a few minutes, put the phone on charge and tightened up my boots but the clag wasn't for lifting and the night is fair drawing in I remember Beinn Ime; well worth a visit, although I also remember the bog that needs to be crossed at the bealach

The Cobbler is looking very different now from lower down and this angle, still appealing and am sure not too much time to get up, but the light is going fast so I am off down the very good path I remember from before. Through the big stones and past the dam before going into the forest zig zags to the car park.

There is one more scenic event though

Apparently it was a blue moon yesterday, the 31st of July where there are two full moons in one month, the origin of the phrase once in a blue moon.
The moon is certainly still very full although it is one day short of being completely full next to Ben Lomond. Wonder how many times it lines up in this way Got back to the car and something to eat and started the drive back. All the way along Loch Lomond the moon was glinting off the water, it really was bright and there was no cloud now. I had to stop and take some photos. I don't carry a tripod, perhaps I will get one of those gorilla pods; been thinking about it. Anyway no long exposure photos to do the scene justice and the few I took on auto didn't come out that great. Certainly not worth uploading.
I did however get this zoomed photo and was astonished to see the craters on the right hand side Your photos are very similar to mine when I was there again at the end of May. I also included the ridge across to a'Chrois, coming down to meet the path you went up. It was lovely and peaceful

I'd agree - you think there's going to be more difficulty with the Spearhead but it's not tricky at all.

Thanks for posting this - I'm hopefully heading this way soon so useful to read a report (loved the moon shot).

Your photos are very similar to mine when I was there again at the end of May. I also included the ridge across to a'Chrois, coming down to meet the path you went up. It was lovely and peaceful

I'd agree - you think there's going to be more difficulty with the Spearhead but it's not tricky at all.

Cheers katyhills, it was a fun walk and I'm into wildlife. it would have been nice to do the ridge round to a'Chrois and down, it looked liked the best option, or to have done the Cobbler, but alas time for the day had run out

The moon was amazing

Nice shot of the moon. Didn't know where 'once in a blue moon' came from or that July has two full moons!

Gordie12 wrote:Thanks for posting this - I'm hopefully heading this way soon so useful to read a report (loved the moon shot).

We are both in the same part of the world at the moment, I was going to do Oss and Dubhchraig next, but WH says it is very wet in places, and the weather this summer won't have allowed it to dry out any

so will try for Vane and Vorlich next, but will still be keeping an eye on the forecast

The moon was special

dogplodder wrote:Nice shot of the moon. Didn't know where 'once in a blue moon' came from or that July has two full moons!

Thanks dogplodder, touche so far as the blue moon is concerned.
It happens every three years apparently, though not sure if it is always in July

Users browsing this forum: Alan B, SecondRow and 76 guests