Sorry: a title (for my first WalkHighlands report) that was just begging to be used!

For a reasonable hill not far from a train station in Perthshire (and a bit of training for an assault on our first Munro, scheduled for the following weekend), we chose Deuchary Hill, adopting the walkhighlands route, i.e. from Cally car park and then on the wide earth track (an unmade-up road, really) up past Upper Hatton, through the gate before The Glack, keeping Mill Dam on the left and then the ‘upper’, more grassy route towards Loch Ordie via Leddown Burn.

The early bit after emerging from Atholl Woods was a bit of a long slog, gently uphill all the way, dodging more sheep droppings than I’ve seen in one place in my life. Strangely, we only saw one sheep: the flock managed to keep out of our way and out of sight, but seemed, by the look of the ground, continually to be only just ahead of us.

All the recent rain in Perth had made a bit of a squelchy mess of the section above the Leddown Burn and we found ourselves dodging from one side of the track to the other, as it continued to wind uphill between the ferns and the heather, in order to dodge the more muddy/swampy bits. But the route was clear, and the track (by now a Landrover track) continued to be wide. So it was with a bit of a relief when we started on the Hill proper, through a gap in the ferns on the left just after we had re-crossed the Burn. We spotted this but first dismissed it as perhaps implausible and carried on looking for another, more obvious, route up but then had to re-trace our steps from further along the path, which was skirting the base of the hill. There is only one way up. The path was very steep up between the crags, and very narrow/overgrown, but again extremely clear and well-defined: you couldn’t really go wrong, even though you could rarely see the rocky path above you as a result of its gradient and the best efforts of the ferns and the heather to re-colonise it. We did congratulate ourselves on helping to keep the path clear for others!

After the first section of the climb, then across a flat, again swampy section where a thoughtfully placed (but disintegrating) branch not only helped keep our feet dry (mostly) but also pointed the way to the path up the remaining part of the climb; finally across a bowl with several hillocks to the top of Deuchary Hill itself.

Our route had the additional few miles of Dunkeld station up to Cally, so we didn’t extend our walk to Loch Ordie or Lochan na Beinne, but simply headed straight back the way we came after our refreshments and the obligatory summit photos.

Thank goodness the promised rain held off, as returning via the crags could have been slippery on the more rocky sections: but it was a fairly long slog back down the road to Dunkeld ahead of an excellent dinner (and hard-earned beers) in the new ‘Meeting Place’ restaurant at the Atholl Arms; and then a bit of a stiff-legged stroll back to Dunkeld station in the pouring rain to meet the last train home.

Flora and fauna report: fallow deer and the peacocks at Hatton; plenty of buzzards, including one engaged in some rather strange behaviour for a buzzard, high-tailing it straight as an arrow past Birkenburn (perhaps a juvenile which had been scared, or scared itself?); dozens of tiny frogs hopping all over the path around The Glack; mute swans and cygnets (including one brave individual floating around away from the rest of the group) at the Mill Dam, and preceded by the advance guard of what looked to be this year’s mallard family; ringlets and small heaths; stonechats (heard rather than seen); and a lot of heather, purples offsetting the greens of the ferns, and plenty of fresh, pine-scented mountain air. Ahhh!

Oh – and, of course, we were also thrilled by the plentiful blueberry (or should that be blaeberry?) bushes on the route, and especially on the Hill itself! (Berries were a bit sharp, though.) 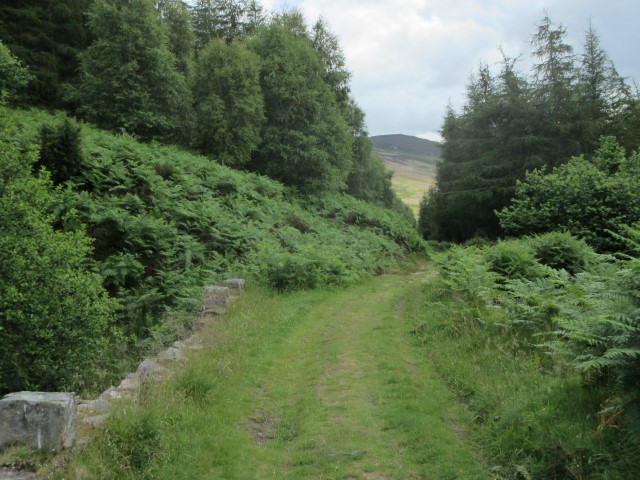 Bridge over Leddown Burn, looking back down towards Mill Dam. Turn round 180 degrees from this view, then go immediately right... 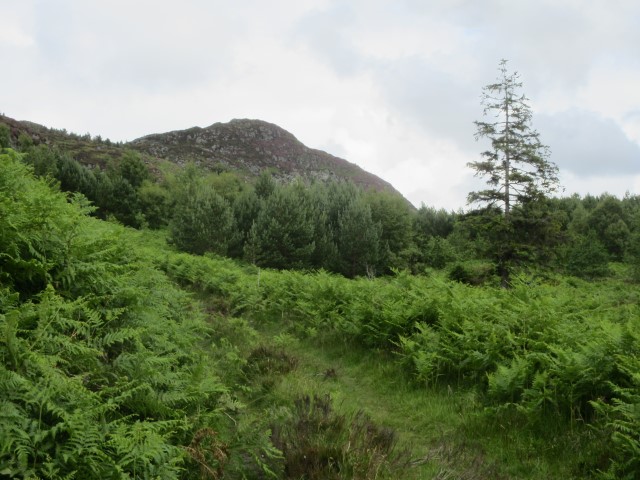 Landrover track up between the ferns. Target ahead! 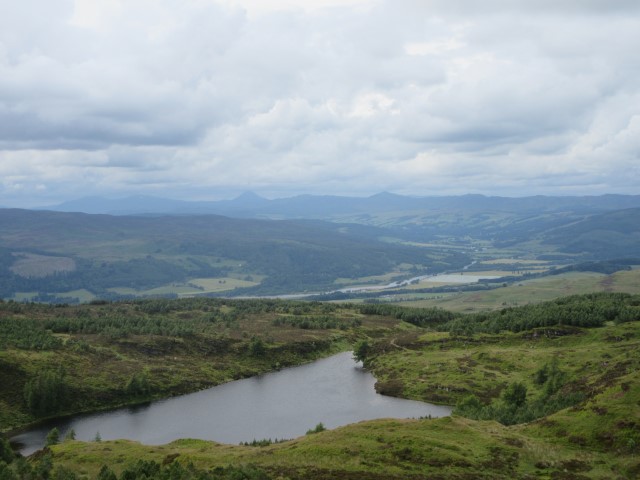 Lochan ne Binne, pointing the way towards the River Tummel 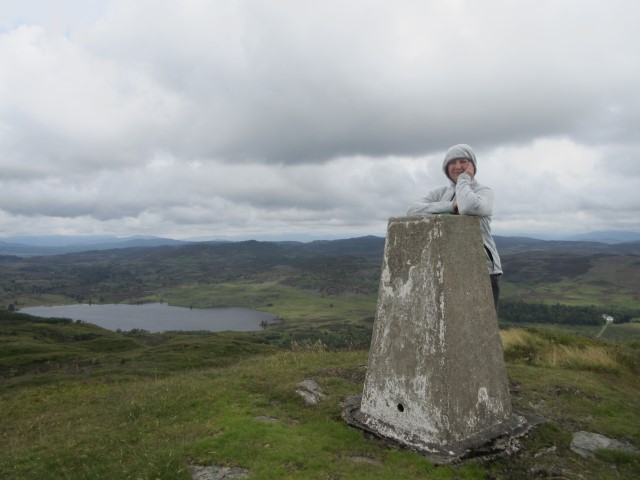 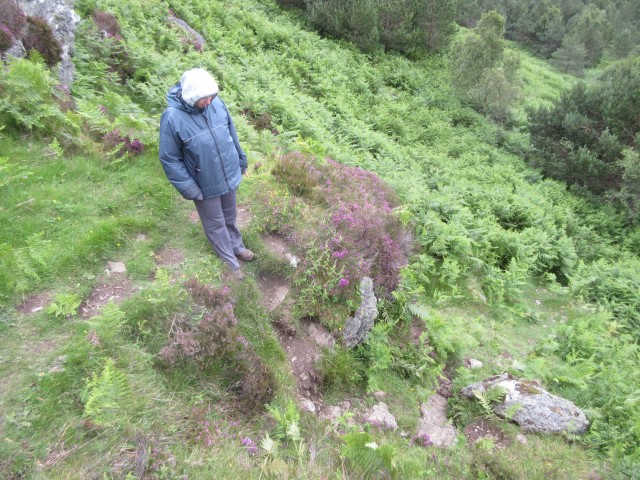 That the path back down there? 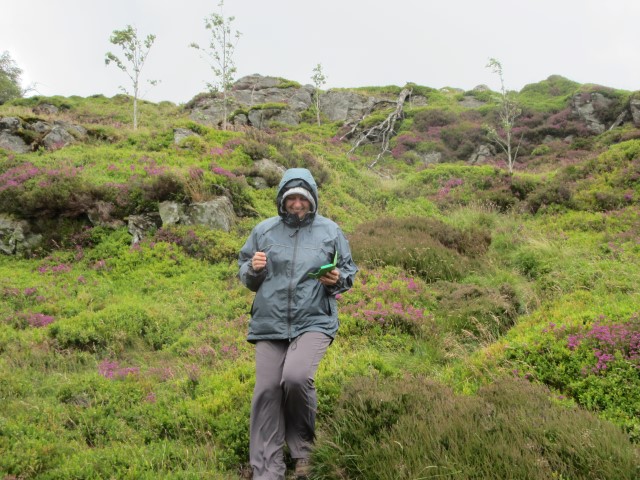 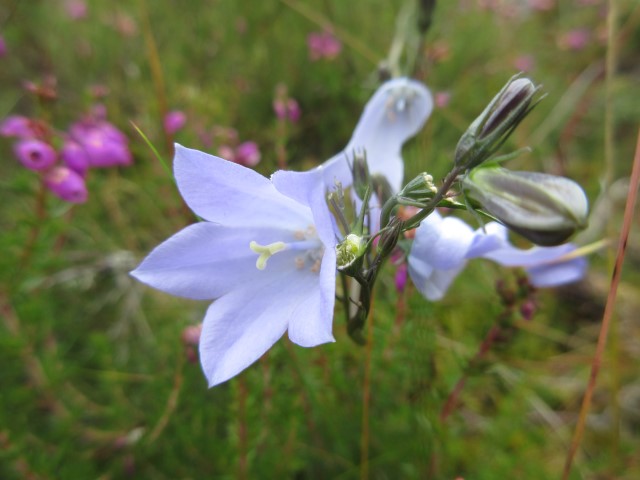 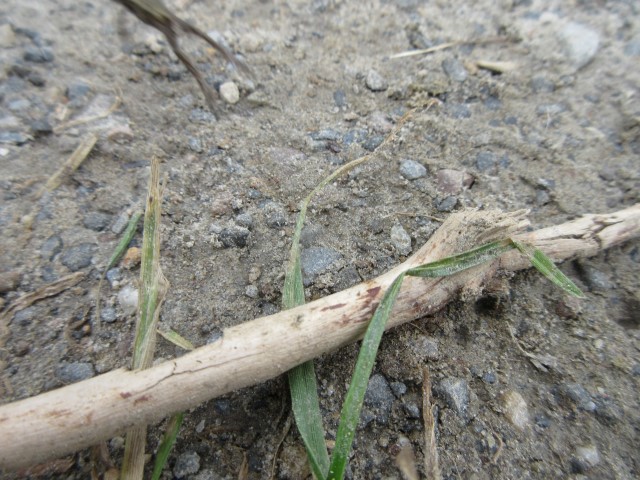 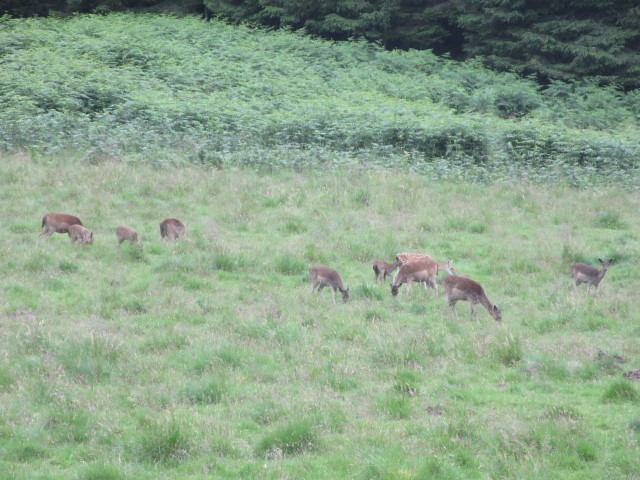 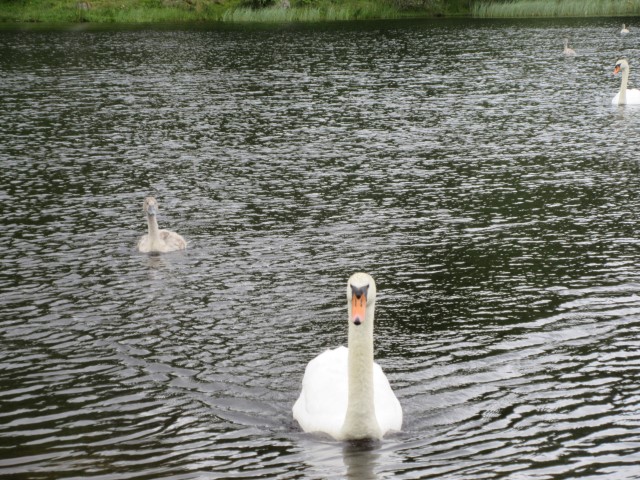