When I was planning this walk I thought of Mr McNeish and some time back seeing him on TV, an advocate of walking off track, and the fact it would save a lot of these motorways of tracks up and down hills. But the only books I’ve seen written by him are the exact opposite, the tourist routes, Munro bagging books, get up, down, tick it off….maybe I’ve missed one.

Todays trip would be to take in Mullach an Dheiragain and Sgurr an Ceathreamhnan. Originally the plan for a few weeks back when my pal from London came up, train booked, so no turning back. But turn back we did after a walk of 7 hours constant rain and severe gust on the second hill, But we had a good laugh and a wild camp for two nights…..slept like logs.

So to todays walkies, a Bank Holiday, a blessing for those of us with not so much leave….. to return for Mullach na Dheiragain via Morvich. A route up through the bealach between Fhada and A Ghlas Bheinn, down to the loch and then some ‘off road’, a rising traverse up to about 600m, which would give me a level section for a breather after the steep ascent before the final ascent of Ceathreamhnan along its southern spur. Along the ridge and left out to Dheiragain.

Return was to be the same route, but by chance Eric, Shona and the springer pack were off to Kintail to do the Sisters, Brothers and out via Ciste Dubh and Camban bothy…jeez thought I had a long day. We met at their start, and arranged to note in the visitors book at Camban when we passed through so whoever followed would know they were ahead.

The forecast was not looking too good for the first part of the day, but improving hmm. Departed the car park at 0800hrs and within a few minutes the waterproofs were out but on reaching the bealach beneath Fhada and Ghlas Bheinn the view to the loch, and the sun making an appearance. And a coffee break, the bealach in the gap behind. A short distance beyond the loch I broke off on the steepest part of the ascent, trackless to reach the aforementioned 600m ish point. The view back, I ascended from the loch across the flanks of the right hand hill, level across the bit in the middle and then up onto Sgurrr nan Ceathreamhnan, more or less following the posts. The first section in full waterproofs for the second time, but it was brightening up. Views began to open up, within the clouds playing their atmospherics.
View to Kintail and Ciste Dubh, Eric, Shona and the pack are in there somewhere. And the cloud boiling in the bealach, love days like these. Atmospheric Despite the summit clearing as I approached it blew in again so no views again on my second visit inside a month. But descending onto the airy ridge a view back as it cleared. I was surprised how airy this section was, although short, the gusting 45mph winds made it interesting.
Short distance to the ridge leading out to Dheiragain and my first view of the next leg, Dheiragain still hidden away in the distance. View of the perfectly formed glen beneath Dheiragain …come on sun you can do it. Looking back up the descent route…ooft I got to return up there. 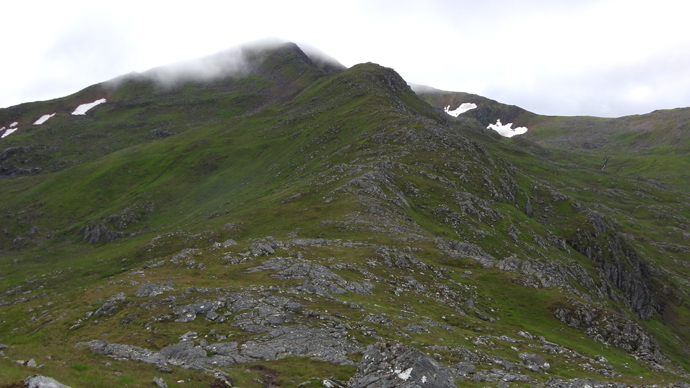 Last leg to Dheiragain summit ahead And eventually the summit with the route behind, jeez looks a long way out. 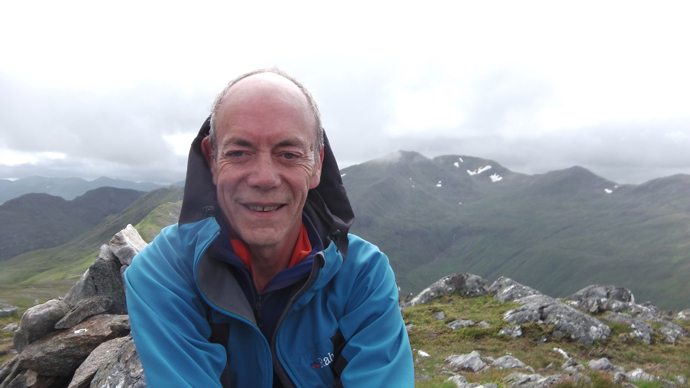 Pano from the summit looking back.

The return from Dheiragain back to the top of the ridge was a tad arduous on tired legs but passed fairly quickly and with the afternoon becoming a gorgeous day made it all the more special as views opened up all around.
Pano looking west from Sgurr nan C’s East top, its true summit on the left of picture, with views out to Skye and the sea. 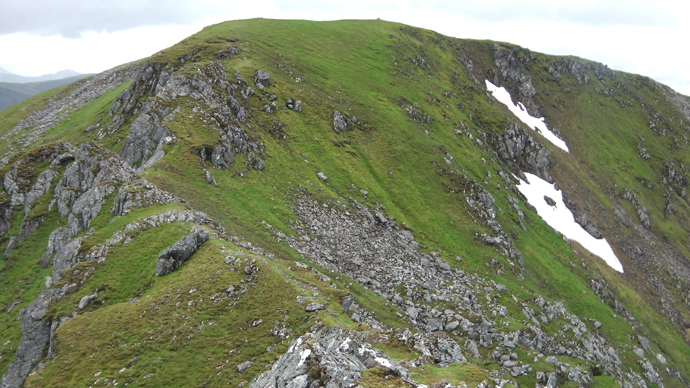 And its headwall complete with August snowfields. And zoomed to the Skye Bridge Descent was to be by the same route. The legs still had to get me down, across slope, never easy, and I couldn’t see me making the return via Camban, but rewarded with views across to Mullach Fraoch Coire and Ciste Dubh in a stunning afternoon. 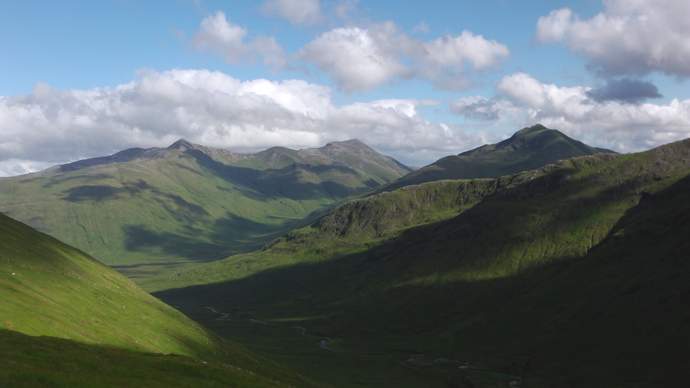 The huge bulk of Fhadas northern corries picked out in the evening sun. 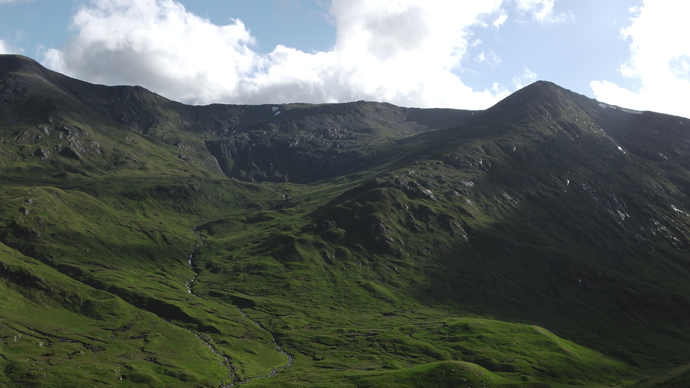 And A Ghlas bheinn across the loch, stunning. Near the summit of the bealach a final look back to Sgurr nan C peeking out over Sgurr Gaorsaic, across A Ghlas bheinns 45 degree rock strata. Happier still now I’m back at the bealach, all downhill from here. It was long hill shift but then summers clock has turned the corner, summer possibly missed us completely. Those plans for those long walks, for this being the time of year for them, like so many plans, just talk, will have to be shelved soon as the year runs out, darkness creeps in and winter singles becomes the norm…..Hmm, not so bad then winter, now we’re talking.
After 12 hours on the hill I was a bit buggered, but got home in time to cut the grass (brown bin tomorrow) as the gardeners on strike and the butler refuses manual work lol. Then dinner, shower and bed for an early work in Aberdeen phew !
Editors note: The selfies are in by special request

Hey I seen some boiling clouds too

Nice one Dave. That selfie stick is well used now

A nice cheerie report despite this summers sulky non appearance

dooterbang wrote:Hey I seen some boiling clouds too

Yep, hmm have a chat with Monty on that one

That would scare folks MT, you know what I mean

Thank you Collaciotach it was a superb walk, one of my best

Yep summers not exactly held on, if it arrived at all, but thank you, I'm a cheery chap, bit gullable maybe, but cheery

Thanks Petr, noticed you've been getting a fair few done of late too