This was the first time I've been up Blencathra. I decided to go up via Hallsfell Ridge.I parked the car in Threlkeld village and headed east along a minor road before turning left up a private road past some farm buildings and onto the open fell. The Hall's Fell path is to the right of Gate Gill. It's a good path but quite steep and leads quickly up to the rocky ridge. 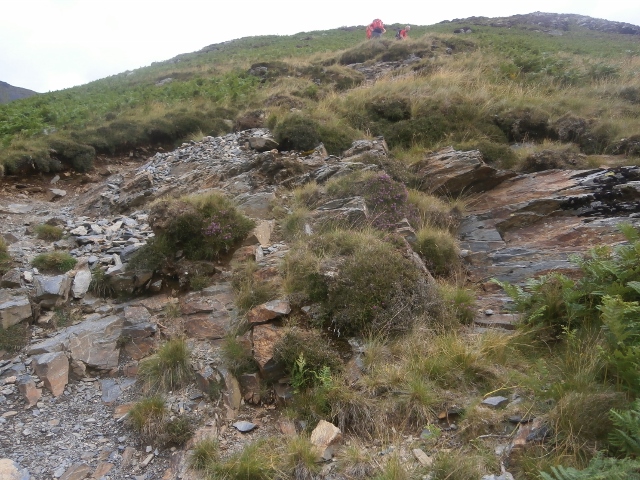 There's a choice of routes along the ridge. I decided to ignore the bypass path and go over the top, and managed to stick to the crest of the ridge most of the way up, but near the top there was a bit I didn't like the look of so I went down and found an easier way. View back down the ridge

After reaching Blencathra summit the next objective was Mungrisdale Common. This was a rather pointless exercise in 'Wainwright bagging', as it isn't really a hill, and Wainwright himself didn't recommend that anyone should go there. Anyway, just to get a blue dot on the map, I walked over to Atkinson Pike, from where there's a path leading across to the Common. It's downhill nearly all the way, with a tiny bit of ascent to the small pile of stones marking the 'summit'. Although it's not the most exciting of hills, Mungrisdale Common does provide a painless way of getting down from Blencathra.A faint path heading south west from the cairn goes over Sinen Gill and down to join the Cumbrian Way, and then a well made path and a quiet country lane lead back to Threlkeld. Enjoyed that. Hall's Fell or 'Narrow Edge' is definitely one of the best ways up Blencathra - in some ways even better than Sharp Edge, as it's longer and leads straight to the summit. Wainwright describes it as 'positively the finest way to any mountain-top in the district.'

Does make you wonder why Wainwright included Mungrisedale Common as the subject of a separate chapter in his guide though!

Another little cracker Andy, the shot of the sheep on Atkinson Pike is awesome, the thing looks like it's posing for you