Not just a good glen

Not just a good glen


I lived for several years in Nevada, in the Great Basin of the American west. One of the local Sierra Club chapters has the motto "It's not just a good basin -- it's a great basin!"

We walked against the usual direction, from Inverness to Fort William, in six full days of walking, one short day, and one rest day.

The short day was at the start. We did not want to have a 20 mile day from Inverness to Drumnadrochit, so we covered the first three miles (75 to 72 on the footprint map) on Monday evening after arriving in Inverness.

Tuesday we took the bus to mile 72, then walked to our hotel in Lewiston (mile 55). It was a long walk, but except the end part on the road was lovely and not strenuous. The tea in the Abriachan campground "cafe" was piping hot and plentiful and served with shortbread.

Wednesday was our rest day.

Thursday we walked from Drumnadrochit (mile 55) to Invermorison (mile 41). Hikers going the other way recommended both the high and the low routes, and we chose the high route. The climbs were steep but not long, and the high scenery was more than worth it -- not so much the views of Loch Ness (which were already nice from lower down), but the hills.

Friday was a short day, Invermoriston (mile 41) to Fort Augustus (mile 34). We spent some time admiring Telford's bridge in Invermoriston -- a lovely old structure -- then had a gentle walk through mixed terrain.

Saturday felt longer than it was. We went from Fort Augustus (mile 34) to South Laggan (mile 23) on relatively flat ground. Loch Oich was very pretty; I think the feeling of having a long day may have been due to our first driving rain of the hike. We'd been rained on each of the other days, sometimes a fairly heavy rain, but this was the first sideways-driving-into-our-legs rain.

Sunday, in contrast, felt about like what it was -- a 14 mile day along Loch Lochy and the canal. We went from South Laggan (mile 23) to Glen Loy (mile 8), walking much of it between lovely hills on the right and the loch on the left. At Glen Loy we had the mind-blowing (for us) experience of taking a tunnel beside a river under the canal in order to reach our hotel. The aqueduct is not readily visible from the path, and it is well worth the short detour down a dirt road to see.

Monday was an easy final day, back through the aqueduct to the trail (mile 8) and onward to Fort William and the marker at mile 0.

The food at the Loch Ness Inn was good, while that at the Moriston Arms was fantastic. They and the Glen Loy Lodge were quite nice and comfortable.

Of the two hostels we stayed in, the Great Glen Hostel was lovely -- a comfortable common room, adequate bathrooms for the number of guests, chickens roaming the yard, and a generally cheery atmosphere. The other hostel, Stravainger's Lodge (an "independent hostel") was strange -- an unattractive building with a clinical feel to the rooms. Fort Augustus was a beautiful little town and we wished we had more time in it, but we were glad to move on from Stravainger's. To be fair, it was very inexpensive compared to other options.

In Fort William, the Premier Inn is nothing fancy but it is right at the end of the walk (going east to west), a nice bonus for footsore walkers, and also very close to the train station. 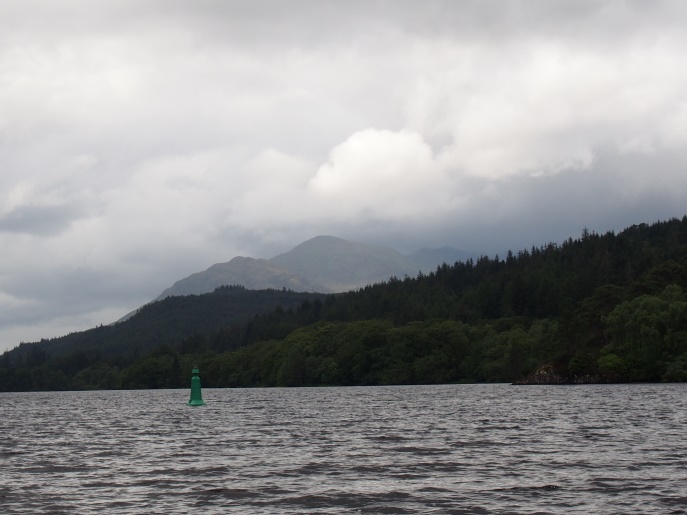 Good report and the Great Glen is a fine route. I heard that the Abriachan campsite had been served notice to close by Highland council due to some sort of planning dispute hopefully common sense prevails

The great glen gets overlooked in favour of the west highland way but this means it doesnt get the hoards of people like the WHW. The South Loch Ness Trail is a good route too, also very quiet. I love the deserts of the southwest but have only skirted the edge of the Great Basin. Hope to get back there soon.

Thanks! We walked the West Highland Way in 2011, going north to south, and it was glorious too. Going against the usual direction also meant we met more people but never fell into a clump.

One thing I have been struck by is how much alike the highlands and the high desert are. On the surface they seem radically different due to the rainfall here and lack of it there, but they are both wild, open, stark places where plants and people have to be tough and where you can see the shape of the land and how it has been formed.

Thanks for sharing ,seems like you really enjoyed yourselves

now you need to do some Munros the next time

We're talking about it, and about staying in one place and doing day hikes out, perhaps on one of the islands. We love the long walks (this was our third, after the West Highland Way and the Clyde), but sometimes we wish we had more time to explore an area instead of moving on the next day. Staying in a place for a while would also allow some Munroes (though we could also get more organized about that from where we stay in Strathblane). Thanks for the suggestion!