Unlike some recently, this was a proper Sunday walk - not too long, not too much up, plenty of time for it, and a pub at the end.

I'd been down in Leeds at a dance festival the day before, which seemed like a very good excuse to return north by the scenic route and have a small adventure along the way (it seemed an even better idea once I'd been delayed by two and a half hours on the east coast mainline on the way down, although I know they didn't do it on purpose!) - although 9am from Leeds was a little bit like hard work when we'd been up until after 1 talking.

I was at Dent station just after 10:30, and for the first time turned up the road instead of down. I started off with quite a good view to the hill, although it wasn't long until the mist came over. I had about a mile to go up the road, up past a patch of forest and on to the junction with a track that ran round the hill. (The road leading on over the hill was a little bit tempting, but not today's adventure.) Heading round the track brought me nicely in line with Dentdale, which seemed to be having quite a different kind of weather. 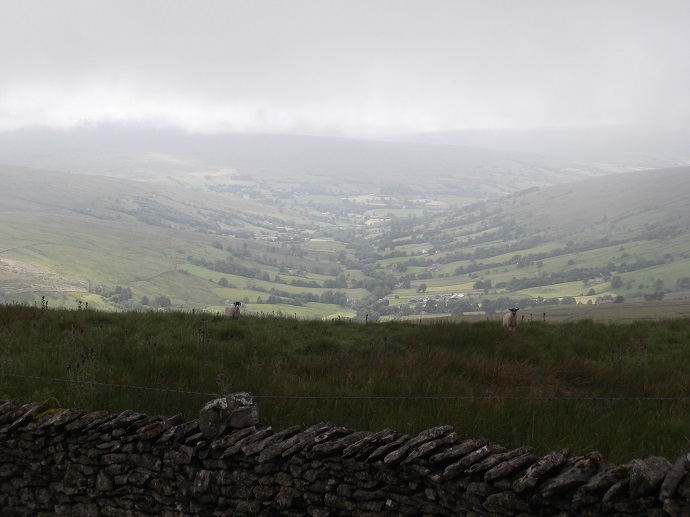 Even with the mist down, I knew this was basically an unloseable route, up by one fence and down by another - the only problem was the way that things kept looming out of the mist at unreasonable sizes (partly because it was spooky, and partly in case any of them were cows. They weren't.) It was a fairly standard Pennine climb, really - a bit wet, but not too bad, and changing from flattish to steep and back again, although with much less rock involved than on more famous hills.

The trig point, when I reached it, was sitting in its own puddle. The cloud cleared just enough at the top to give me a bit of a summit view - not much, but at least something beyond the hill I was on!

It had been quite an easy climb, but that was nice for a change after a few longer treks. Down was just a case of following the wall on past the trig point, although it did lead to some wetter bits further down, not all as avoidable as I'd have liked. I followed the track down to the road, instead of curving back along to where I'd started, which meant coming down to go under the railway at the Artengill viaduct. I always find old tracks quite interesting - this was was mostly just rough earth and stones, but had occasional cobbled patches which were probably new, but might have been older. The viaduct was quite impressive to walk under, although I know there are far more impressive ones. Stone House always looks good from the train as well - it's a definite view from above because of the way the slope falls away to it. By about 1:30 I was in the pub with a pint and waiting for my lunch - it had been a very nice amount of walk, as well as leaving plenty of time to get back for the 15:25 train. So I had a nice day, and it was a good reminder that not all walks have to be epic...


GreatKnoutberryHill.gpx Open full screen  NB: Walkhighlands is not responsible for the accuracy of gpx files in users posts

That aside I loved this little beauty, this is the kind of hike I really enjoy and I'm with you Nigheandonn, they don't have to be epic to be enjoyable...specially when they have a boozer to finish